I was unsure what to expect as I turned south into headwinds from the smooth surface of the Alaska Highway.  Everyone asks knowingly if “you’re going to take the Cassiar”– Sure.  Yep.  Of course.– but nobody says why.  Turn south at “Nugget City” onto Highway 37 for “the Cassiar“. 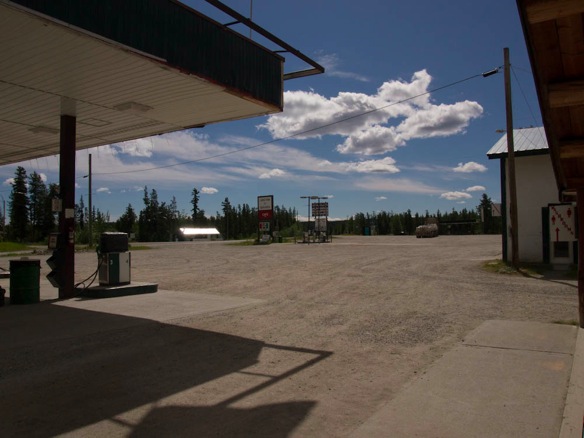 Leaving the Yukon behind, I was greeted by British Columbia and signs of last year’s wildfire.  Immediately, the Cassiar is different.  The understory celebrates it’s fortune with flowers and greenery– the fireweed is budding and will be ablaze waist high in a matter of weeks.  For now, brilliant yellow flowers are in charge.  The hillsides show areas alternately affected by fire, and spared from it’s flames.  Charred aspen aside the more fortunate trunks pattern the hills. 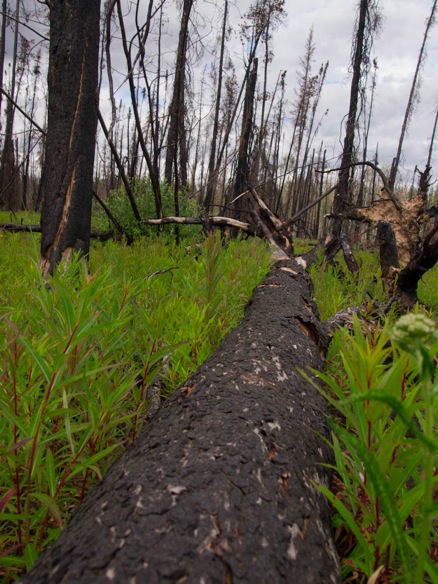 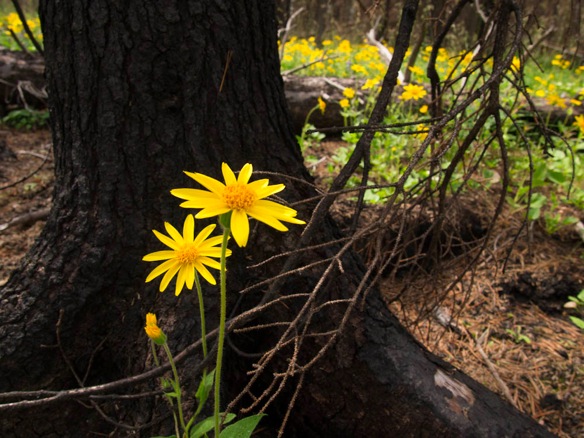 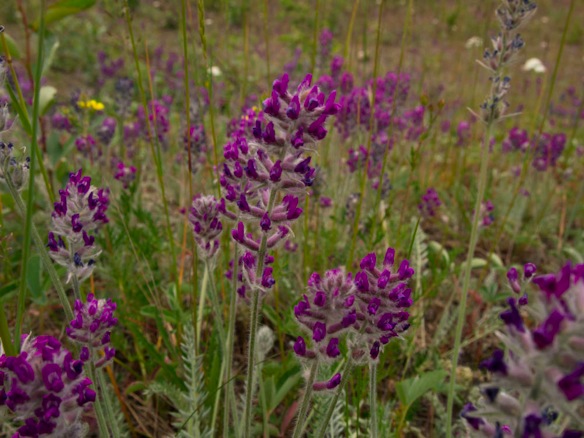 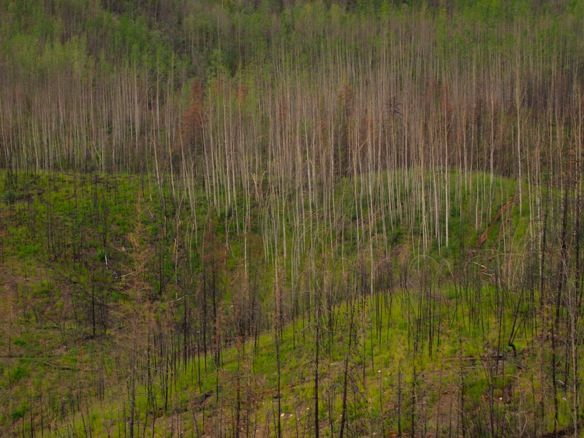 The fires also bring the mushrooms and the mushroom pickers.  The fire morels arrive the season after a burn before the grasses and brush exclude their existence.  Fire morels are hand-picked by migrant workers from all over the world, and are purchased by a local buyer, usually camped in an RV aside a mobile kiln which is used to properly preserve the fungi.  The mushrooms are prepared and sold to market in Vancouver.  Most fire morels will find their way to Europe, while other varieties such as the seasonal pine mushroom harvested in the damp coastal forests go to Asia, and China in particular.  Aside from tree planting, fruit harvest (cherries, plums, apples, etc.) and gold mining up north, add mushroom picking to a Canadian migrant lifestyle.  Some seasons promise good money, although dry weather was drying up this year’s promise.  The pickers were getting $8 per pound, which is a hefty payday if you can bring in 30-50 lbs per day as more productive pickers are able to do. 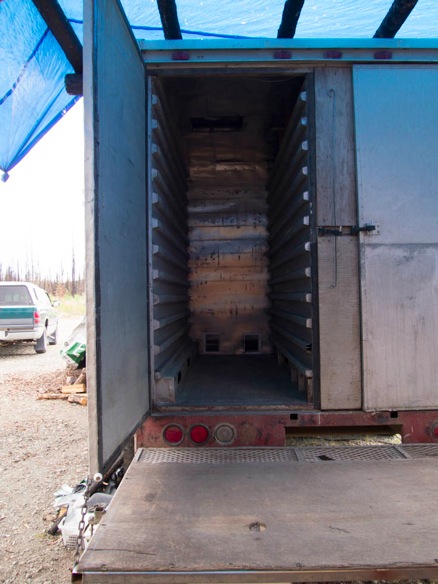 Finally completed in 1972, the end sections of B.C. Highway 37 have been in existence for several decades more.  The recently improved road, mostly sealed gravel, connects the Alaska Highway in the north near Watson Lake with the Yellowhead Highway at the south, about 60 miles west of Smithers, B.C.   The Alaska Marine Highway makes a stop in Prince Rupert, at the western end of the Yellowhead Highway.  A spur road connects the communities of Stewart, B.C/Hyder, AK with the main branch of the Cassiar, also called the Stewart-Cassiar Highway and simply, the Cassiar.  Another spur follows the Stikine river and skirts the “Grand Canyon of the Stikine” to the communities of Telegraph Creek and Glendora.  There are said to be a few grade near 20% on this road, which is always fun.  Aside, there’s not much else out there save for some trees and rivers and lakes, and lots of mosquitoes.  There are mining explorations in the hills and active jade and gold mines off the road;  an old asbestos mine is now closed, and the town of Cassiar is no more than a memory in the form of a cemetery.  The area promised gold around 1872, before fortune-seekers were lured to the Klondike gold fields.  This is B.C.’s “lakes region” and if “not much else” is your kind of thing, fill up on a few days of food and take the Cassiar.

From the north, the road passes a plethora of shallow ponds and vibrant aqua-colored lakes before eventual definition with mountain valleys.  Most of the ride south from Good Hope Lake remains within steep mountain valleys, peppered with finger lakes and frigid streams, and mosquitoes.  Every place claims to have the worst mosquitoes, although I’ll usually remark that they’re all bad.  A thousand or a million is a lot of mosquitoes.  I’ve seen much worse, but flying insects are a fact of life up north and can spoil some picnics.  You learn to camp out of the hollows, ideally on a windy hill somewhere.  Moreover, you ride fast enough that they can’t eat you and at night you remain in your tent, free from annoyance.  If you remember to pee before you get in at night, you’ll be happy not to emerge until morning.  I enjoy a swim after a day of riding, and sometimes again in the morning.  I spent my first night on the sand by Good Hope Lake, and every night thereafter alongside a swimmable body of water.  Further south and few weeks further along, the nights are almost dark for a brief period.  I hadn’t seen the moon in months. 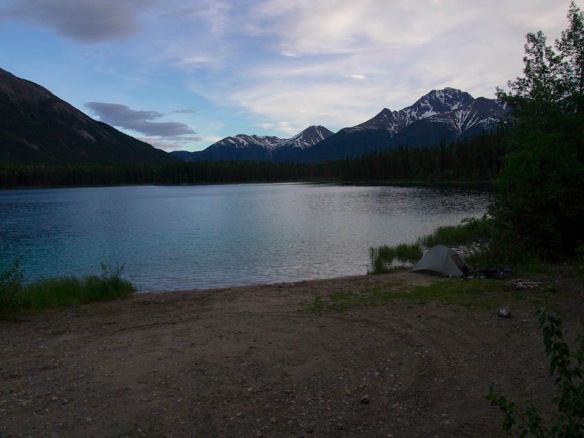 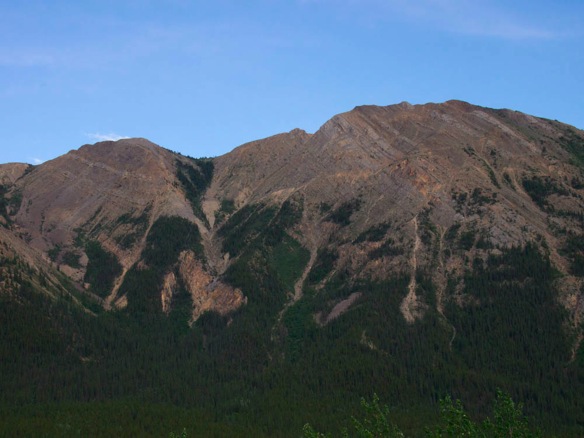 After hauling green avocados around for a week from Whitehorse, they ripened exactly when produce was unavailable.  Along with nearly a dozen apples, I was satisfied for almost a week out of town.  Avocadosdon’t come from anywhere nearby, but not much that can be bought in the stores here does.  A ripe ‘cod turns any bowl of food into a treat, augmented with a bag of salt and vinegar potato chips in this case.  I’d run out of salt for a few days, which is a shame; hence, the potato chips.  I eventually emptied a salt shaker from a restaurant into my personal salt container.

Dease Lake has a full grocery, expensive as you’d expect.  Iskut has a smaller store, well-stocked for these parts.  Good Hope Lake has a tiny store and meals can be had at a few lodges along the way.  The Bell 2 Lodge seems to be a local favorite and is a heli-skiing haven in the winter–  a resident of Smithers who works in the mineral exploration business said that the dining at Bell 2 is the best for over 500 miles.  It wouldn’t be hard to do, but I’m sure he’s right.  The cafe in Dease Lake has wifi and good cheap breakfast.

After torturing my old touring shoes on the Dawson Overland Trail south of Braeburn, I picked up a pair of lightweight Salomon mid-height hikers (the XA Pro 3D Mid 2 GTX) in Whitehorse.  They fit my obscure bike touring specifications with ankle-high Gore-Tex protection, a lightweight constructions without too much padding or insulation to become waterlogged, a removable insole, and a reasonably stiff outer sole without a heavily lugged tread.  Even if they get wet they almost dry overnight in warmer weather.  They look like fancy outdoor shoes, but it’s about the best I’ve come across for three season adventuring.  A lightweight wool sock in warm weather and lots of fresh air keep the feet happy.  Shoes like this are another reason I prefer not to clip in.

Camping is a breeze up north and surface water is plentiful.  I became a bit complacent with use of the water filter and had some headaches and rumblings by the southern half of the road.  I couldn’t say if it was the water or an overdose of lentils and nuts and seeds, but fighting headwinds on a low tank of gas is a real test.  A few times close to tears, I’m reminded why long paved tours (alone!) aren’t my thing.  Of course that’s some of what I do, but near-term goals help break up the mile crunching.  Challenging topography and dirt roads distract the mind from distances and other road-touring monotony.  Small towns and bakeries do the same, and the Cassiar had me dreaming of France where Lael is traveling.  At the moment, she’s just taken a boat to Corsica and will spend some time WOOFing on a farm.  Lael also does a good job of brightening a bad day on tour, mostly because she’d hate it more passionately than me.  As motorists waved and thumbs-upped, I was about to the point of giving the finger in return.  I was sick and counting miles on the damned Cassiar.  In retrospect some good days and nights are enough to forget a few days of misery, and my camp on the southern shores of Dease Lake is enough to erase at least a few sleepless nights.

Wandering around the Cassiar Cemetery allows one to imagine the area in times past.  Relatively few surnames populated the area of mostly native and Russian origin, with a few exceptions. 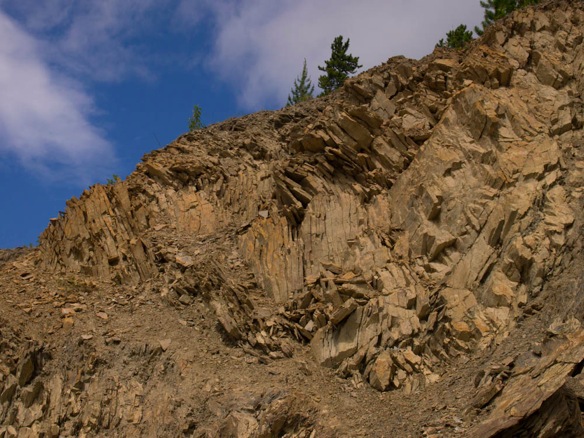 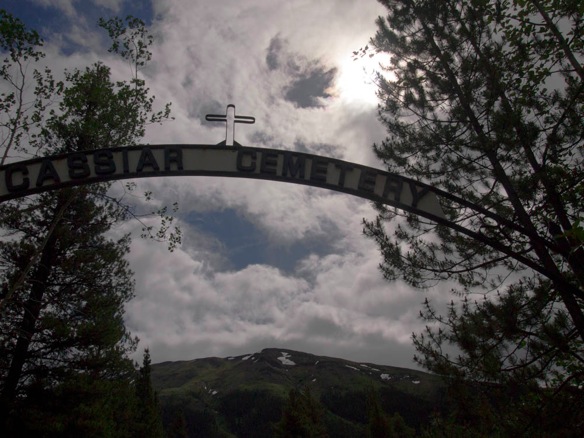 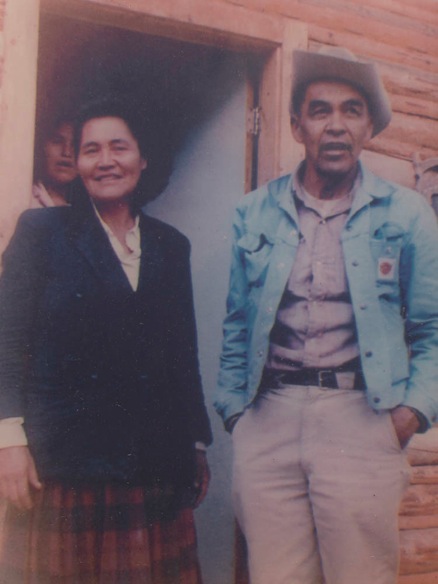 The road climbs and descends and tops out at Gnat Pass in some meadows at 4072 ft, but is mostly quite tame with a few 8-9% grades to river crossings which are well signed to warn trucks and RVs.  The surface is mostly sealed gravel, or chipsealed, and a larger tire is recommended for comfort and speed.  Sealed gravel roads can be even more harsh than well-graded dirt and a larger tire at a lower operating pressure is rides well.  A big soft tire is often faster in real world conditions, and is much more comfortable.  Many cyclists complain about the road surface while simultaneously asking, insisting, about the extra resistance of my wide tires.  I laugh, remarking that it is indeed comfortable and that it not appreciably slower (did I mention the rims are heavy though, another issue).  I laugh, thinking of narrow tires and Ortliebs and broken spokes and chipsealed roads.  As always, an under-packed and an overbuilt bike does best. 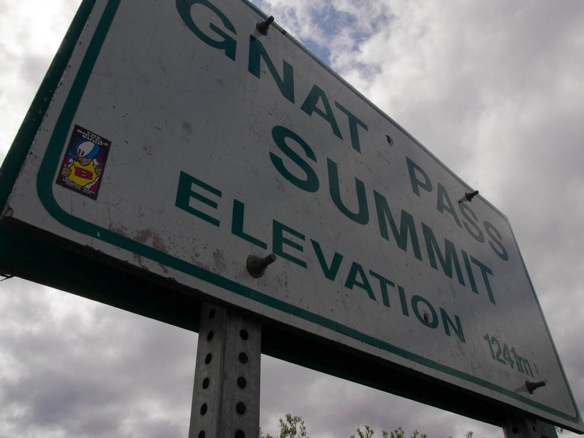 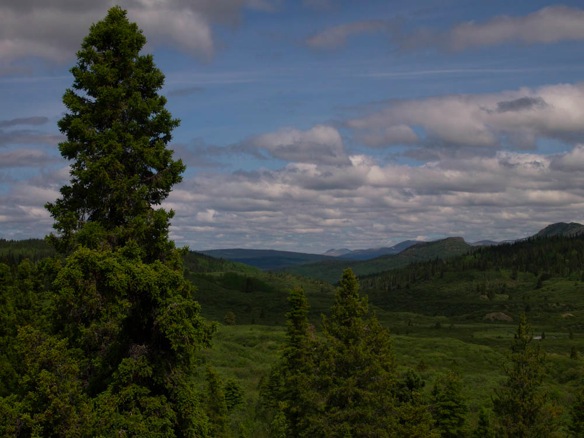 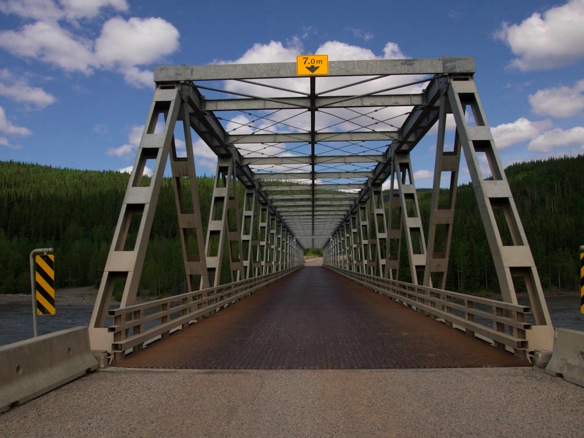 Descending to Iskut and continuing south, the roadsides become more lush with cow parsnip and wildflowers, and the trees become much taller.  The chance of rain and clouds greatly increases further south,  approaching the coast range.  The word amongst cyclists was that the manager at the Kinaskin Lake Provincial Park Campground is offering tent sites to cyclists, without charge.  I’ve spent few nights in established campsites in recent years, but this place was tidy and magazine-picturesque.  Campsites spilled into the lake, each with a small pebbled beach for launching small craft into the crystal water. 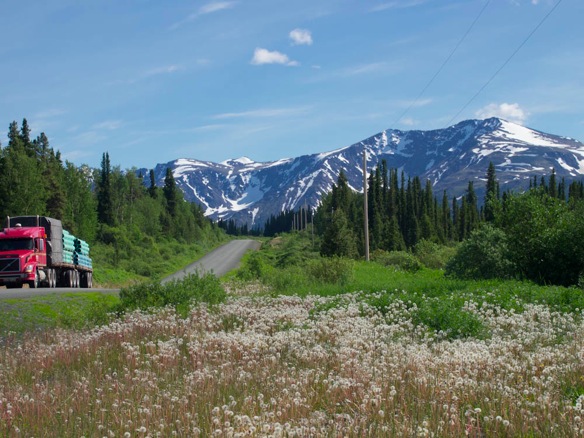 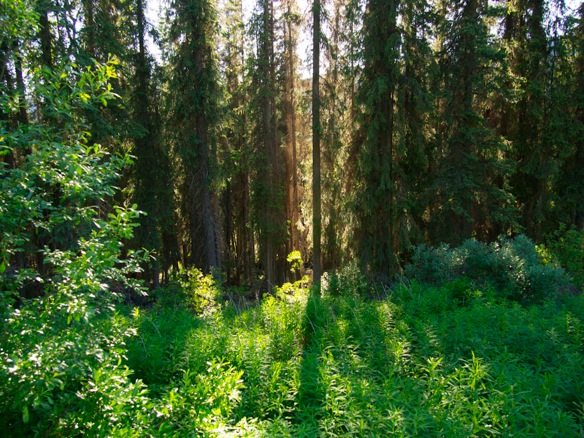 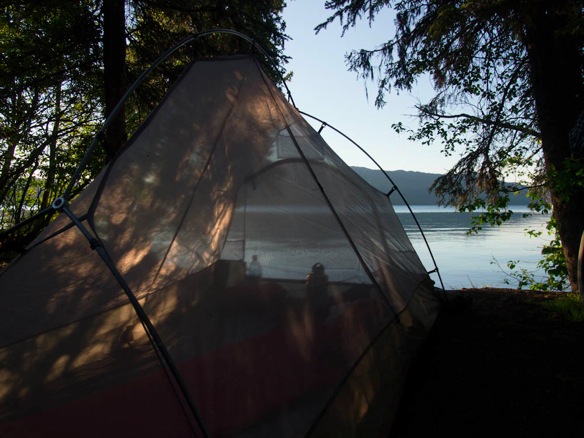 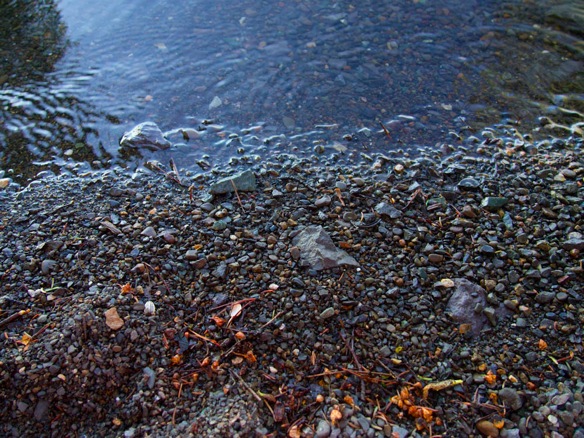 Sick and staring at my cyclecomputer, the last few days were spent in a haze and a white blanket of clouds created a literal fog which concealed the glaciated peaks of the coast range.  These mountains capture massive snowfalls in the winter and harbor glacial ice year round.  The roadsides expose dozens of little black bears, although some are more brown in color.   Early in the season the bears flock to the roadsides as the first greenery appears.  As the forests green, the bears move elsewhere for food.  Finally in late summer, they seek salmon in the streams.  The bears appeared curious and harmless and most often they were to be seen only as little black faces in the bushes.  I’m not nearly as enamored with bears as most motorists seem to be.

Out the south side of the Cassiar and onto the Yellowhead Highway, I am comforted by the infinite bounty of supermarkets and the internet, rehabilitated by yogurt and $1.99/lb cherries.  Kitwanga, at the south end of the Cassiar offers free camping and washrooms.   A warmshowers host 2KM east of Telkwa (16km east of Smithers) has a small cabin reserved for cyclists.  Look for the vintage Kuwahara bicycle hanging from the “Rainbow Trailer Park” sign or find John Neff on the warmshowers network.  Showers, laundry and wifi are available onsite, along with the company of an avid traveler, cyclist, and adventure motorbiker.  A hundred miles to the east, Burns Lake is reported to have free camping in town.

7 thoughts on “Rock the Cassiar”