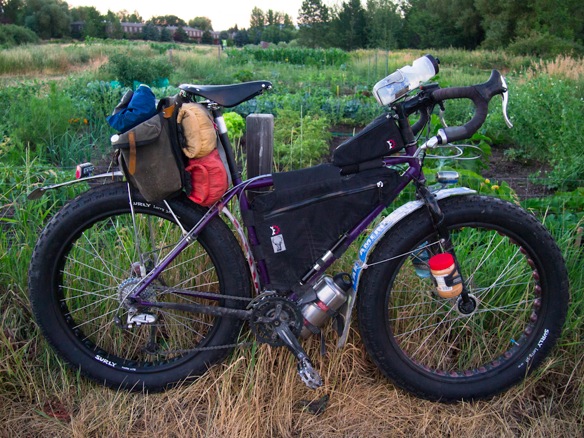 The greatest asset that any cyclist can bring to a ride, except fitness, is familiarity with the machine– with the exact moment that the tire loses traction in a turn, the precise action to avoid pedal strike through rocks, and the best way to hide from the wind when the Cateye reads more than 20.  Riding one bike will foster a connection with the machine that is lost when multiple bikes are in play.  I’ve heard of riders with as many as five different mountain bikes who must know which trail the group is planning to ride to be able to select the appropriate machine.  There are such things as training bikes and racing bikes, and road bikes for paved roads and different road bikes for gravel roads.  There are true cyclocross bikes and cross-type bikes that are marketed as light-touring bikes and commuting bikes and hybrid bikes.   Yesterday’s downhill bikes are today’s all-mountain bikes, while yesterday’s cross-country bikes aren’t really even mountain bikes anymore.  Snow bikes have stable geometry at slow speed while trail-capable modern fatbikes are faster handling and feature higher bottom brackets.   This week, both a carbon fatbike and a titanium full-suspension fatbike have been released.  Every year, there are more bikes for more disciplines of riding.  Pick one.

Hybrid has become a dirty word, spoiled by uninspired comfort bikes with low-quality suspension and remarkably upright riding positions.  However, the concept of a hybrid bike signals a versatile machine that can find its way through a variety of conditions.  Historical hybrids such as the Trek Multitrack and Specialized Crossroads give credit to the genre, although few people realize the value of these older models.  The same bike with a drop bar would compete with a Surly CrossCheck or any off-the-peg touring bike, for a fraction of the price.  But nobody wants a bike that doesn’t claim to be great at anything. Fortunately, I demand a bike that is good enough at everything.

The ideal everything bike does not exist.  For some, knobby tires and suspension are essential tools.  Despite the admonishment of purists, riding around town on a mountain bike isn’t a real problem.  Others may require to keep up with an aggressive paceline on Saturday or to break away from the peloton, and a race bike can certainly ride to work on Monday.  I get passed by Cervelos and backpacks all the time on the bike path, and I’m a little jealous as I bump along on a fresh Nate tire on my Pugsley.  But the Pugsley can do things the Cervelo never dreamed– our needs are obviously different.  Many riders are well served by bikes disguised for touring or cross or comfort.  These are the workhorse hybrid bikes of our time and can participate in road rides with friends as well as long-distance travel on dirt roads, and sometimes even singletrack.  A highly specialized machine has long been the standard of an optimized bike, but it is easy to see how a specialized bike is quickly compromised in changing, real world conditions.  Optimization through generalization will ensure you are never on the wrong bike, even if it’s not the right one for the job.

Hybrid is not a dirty word.  Neither is comfort.  Ride one bike.

17 thoughts on “Ride one bike”