Gary Blakley has been riding here for decades.  Spinal ridges and a rocky white mesa are a bike playground unlike anywhere else, except Moab.  In the appropriate season, the deserts of New Mexico present opportunities unknown to riders in temperate, forested regions.  Since Gary’s time on a 1987 MB-1 with drops, the White Mesa mountain bike trails have been developed by the Bureau of Land Management.  The trails are well defined, signed, and fun– except that every time we ride there someone goes over the bars.

Separate from the main trail system, rough jeep trails and faint singletrack lead to another world known as The Moon.  Underlain with bright white gypsum, the area is part of an active mine, and adjacent to the mining operation are hummocks of crusted white sediment.  These features are nature’s dirt jump track– traction is good, transitions are smooth and the landscape is wide open.  Play is inevitable.

Leaving from the trailhead, follow the ridgeline along the aptly named Dragon’s Back trail. 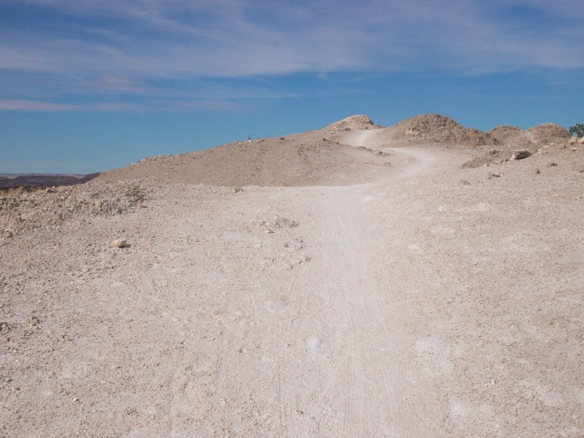 The spine of the dragon, looking north toward the western end of the Jemez Mountains.

This short steep cliff blocks our passage, for a moment.  Teamwork gets us up; the reward is a fast descent off the north end of the ridge. 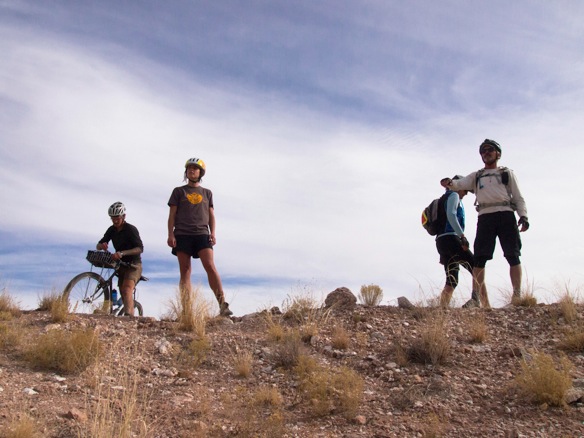 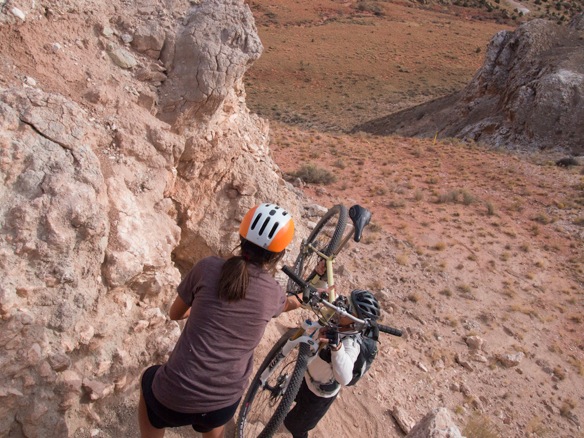 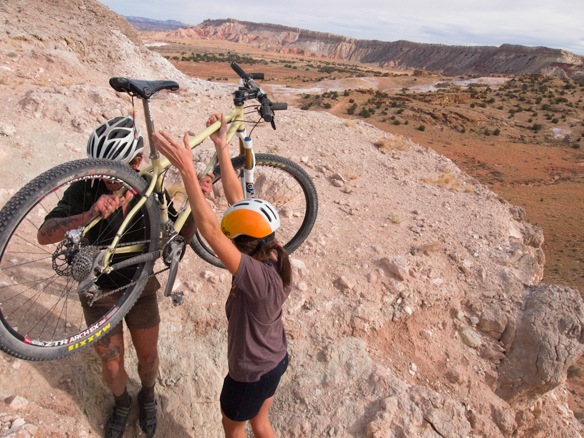 An old cabin slowly melts into the desert off the north end of the trail system.

This part of New Mexico has a relatively mild climate, so this place will do just fine.  Gary suggests a few improvements. 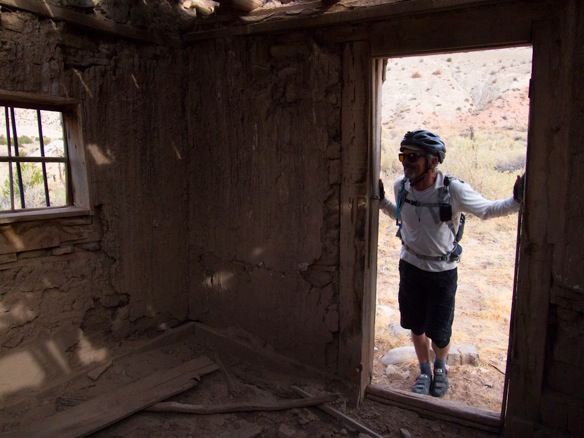 Our bikes speak of a broad range of approaches.  Like a touring bike or a road bike, a bicycle only becomes a mountain bike when it is out riding in the mountains, or in the hills or the meadows, deserts or forests.  For this reason, I prefer the term all-terrain bike, or ATB.  In various modes, any of these bikes would be fine on the road, on tour, or on dirt tracks.  Gary’s custom steel AMPeirce is thoughtfully built for comfort and utility on trails.  Come spring, it will serve as a touring bike for a time.  As planned, it may be for a very long time.

Patti’s bike is also custom fabricated by Andy Peirce outside of Del Norte, CO.  The bike fits more comfortably than any bike she has owned, and uses neutral stem and seatpost positions.  She has recently converted to On-One Mary bars, and loves them.

Gary and Patti have hosted passing cyclists on the Great Divide Route in Del Norte for years.  This summer, they rode north on the Divide from their home in Colorado to Banff, AB.  Leaving this spring, they plan to spend over a year cycling the world.

Lael’s Raleigh XXIX has become a favorite of all the bikes she has ridden.  It felt like a lot of bike when she transitioned from the small wheels of the Hooligan this summer, but now she rips.

The Hooligan will soon be back from storage.  Some simple modifications are planned, including a more upright bar and some larger tires.  I’ve ordered a Velo Orange Tourist bar, which features generous rise and sweep to allow a more upright riding position.  Some voluminous 20×2.125″ Kenda K-Rad tires will conquer both paved and unpaved commutes in town, and are well priced.  Right in the city, Albuquerque has some historic irrigation ditches with dirt levees which are a blast to ride, and less than a quarter-mile from our house some mellow singletrack trails wind along the river.  Lael loves gold things, especially her Marys. 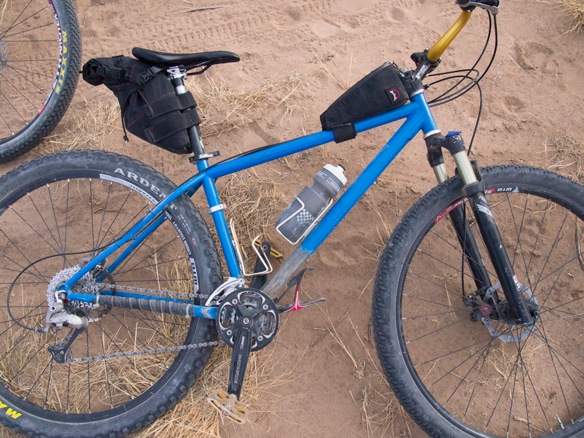 This bike needs no introduction.  The Carradice saddlebag has been removed and may spend some time on the new VO Campeur when I complete the build this week.  For a time, I will have two bikes allowing me to refine each to a more specific purpose.  The fenders will soon be removed, and the Pugsley will become a dedicated ATB.  I may consider building some 29″ wheels at some point to continue my experiments from this spring.  The new 29×3.0″ Knard tires designed for the Krampus will fit the frame nicely. 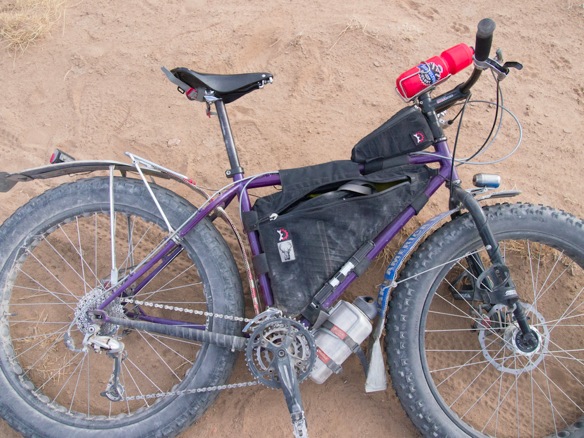 Jeremy is traveling through town and has several interesting bikes in his possession.  The design of this Laguna Mountaineer is representative of mid-80’s mountain bikes like my High Sierra or Stumpjumper.  High quality 120tpi 2.35″ Kenda Small Block Eights are the heart of the ride.  The basket is the soul.

Also in his traveling stable, Jeremy has a Rivendell Hunqapillar with drop bars and 2.2″ Geax AKA tires.  I intend to spend some time riding it to develop the idea of my ideal dirt road tourer.  Groundwater seepage is rich with minerals, and crystallizes as snowy salts at the surface.

We aren’t in Texas anymore.  A 34T chainring is a little steep on some hills.

Given the color, some iron may also be present.

In search of The Moon, we leave the signed trails behind.  In a rare instance, this actually looks steeper than it it.  Still, it was too steep to ride and at least one rider (with a wire basket) flipped over the bars. 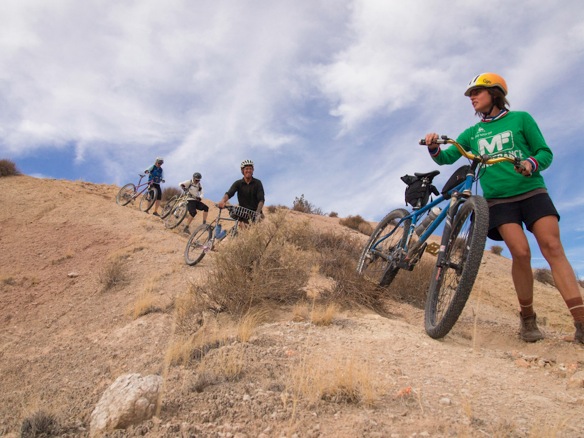 The faint trail disappears into a narrow drainage. 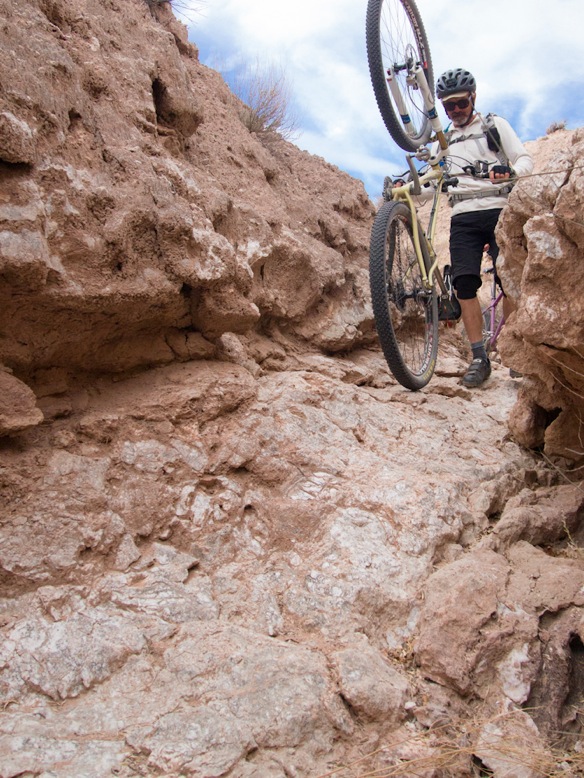 …to The Moon!  Linger and play. 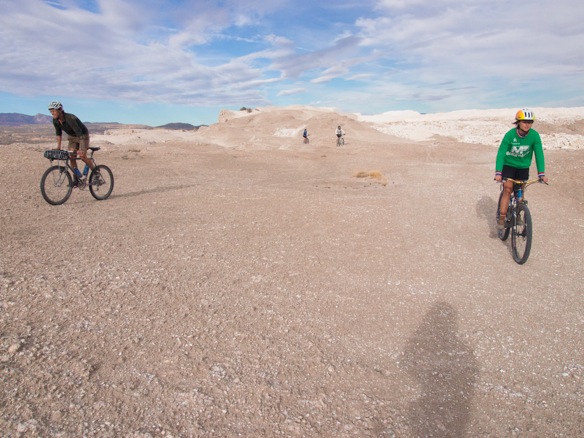 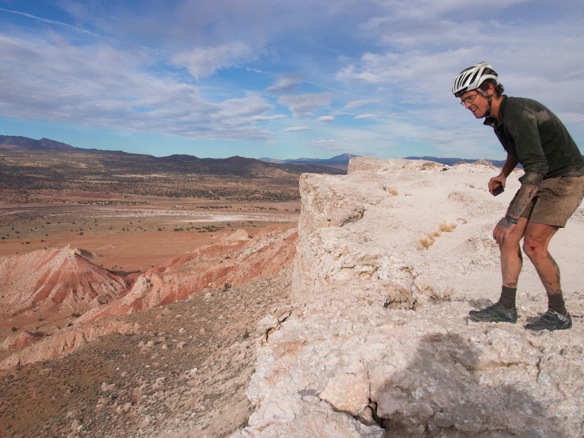 And as the sun falls, we spin back to the start.  Riding in circles isn’t all bad.