“…made me feel i had finally found what the hell it was i didn’t know i was looking for down in this godforsaken land.”

just got into san felipe yesterday (staying at costa azul hotel on the beach for two nights for a much needed descansa and holiday treat), camped last night in a weird rv/camping site called las playas del sol (6 km from town) where a bunch of retired old folks think it would be nice to have a home away from home amongst some nice dirt and propped up mobile homes.  we were recommended to stay there by an elderly couple from victoria, british columbia, and their description was much nicer than actuality.  we stayed under some palapas and had the place to ourselves, and no one was around in the evening to accept our 15 bucks, nor were they there in the morn.  the view was spectacular and the residents were more than nice, but the communal amenities were rather sparse and dirty.  glad it was free.

prior to that we stayed at cayote cal’s for two nights, one night camping and the second inside due to crazy winds that were about to rip my tent in half.  the hostel was great, but the owner rick was a total arrogant ass.  it’s too bad his manager lulu (whom we met just upon departure) wasn’t there while we were, for she would have made the stay infinitely nicer.  rick seemed to be much more impressed by cycles with motors than ones powered by bi-peds, though he doesn’t ride himself for the great fear of falling.

the ride from coyote cal’s along highway 1 to the turnoff for cañón la calentura was made quite difficult and slow by an incredible side wind.  we went two miles past the turnoff before asking a farmer for directions, turned around and went back to the military checkpoint where we had semi-nervously passed the unmarked farm road.  the soldiers laughed but were impressed with our endeavor and happily directed us on our loco path.  after making it about ten miles down the sandy road we dipped off and hid in the bushes of a little slot canyon.  only a few cars passed in the night and we fell asleep under stars and silence.

the next day proved to be one of the more beautiful, yet challenging riding days i’ve ever had – those thirty miles of dirt were even tougher than the ninety mile push from hollywood to laguna beach.  such a beautiful way to travel, biking in solitude and dirt (reminded me of edward abbey’s proclamation to allow only feet, bikes, and hooves as a means of travel through national parks).  we only encountered two trucks passing, and a few men on horseback, nothing more but swirling sand and gusts of wind in the high desert.  the climbs were intense but the views were more than rewarding, made me feel i had finally found what the hell it was i didn’t know i was looking for down in this godforsaken land.

we finally reached the top of the pass and descended into a high, dried up lake bed where we started to run low on water.  close to the top of our last climb a truck came barreling down the road towards us and i stood with hand up, desperate to confirm our proximity to civilization.  the truck stopped and in confusion and awe, the four seemingly sketchy old fellows told me ten to fifteen more kilometers.  i waived them on and we immediately collapsed by the side of the road and stuffed our bellies with all the fats and sugars we had – even took big “nicholas carman” gulps of agave nectar, straight shot of glucose to the blood stream.  drinking the last of our water and high as kites we crested the final hill and could see lázaro cárdenas off in the distance.  the next eight miles or so were beautiful, slowly rolling down the washboard dodging frequent patches of what seemed like quicksand.  as we reached the ranchos outside of valle la trinidad, exhausted and parched, we had to evade quite a few packs of angry guard dogs – which proved rather difficult and frightening as we slid through the wash and repeatedly had to stop to throw rocks to ward them off.

finally, we reached valle la trinidad as the sun set and by luck rolled right into a nice, cheap hotel in the center of the quiet little pueblito of sand.  steaming hot showers, the best tacos of my life, a six pack of dos equis and twelve churros were my ultimate resolve for such a tedious day of pedaling.  the man and woman who ran the taquería asked if we were there just a year or two ago – was that you nick and lael?  I said no but told them of our recent adventure, and the man said we were ambitious fools for having ridden and camped on that road for only outlaws and bandits traveled through there, assaulting anyone else who tried to pass.  in retrospect maybe those men in the truck i stopped where crazy banditos who were too befuddled by my giant dirty bike and self to really think of assaulting me.  or maybe they wouldn’t have deemed any cyclist as worthy prey.  or maybe they were simply old cowboys headed to a dusty ranch and that taco man’s worries only reflected a universal fear that many have of remote places.  i take the latter.

rising early to thaw our milk for the morning’s coffee, we packed up and headed north of town where the sandy road finally met up with the pristine pavement of highway 3.  heading east we stopped at the last outpost for water and tortillas and by chance crossed paths with an ex-military man from fort louis washington passing through with his wife and father.  they had been coming down here for fifteen years, sailed around the entire peninsula and even done a three week cattle run in the area with a mexican cowboy friend of theirs.  he assured us of the safety of the region and insisted that we camp only twenty five miles or so in the valle santa clara on the southeastern foot of the sierra san felipe.  and that we did, after a relaxing, gradual drop down such a grade of road that would make any cyclist blush.  hardly ever needing to pedal, banking through mellow canyon turns and cruising along smooth highway in high gear, shooting off into great expanses of only more sand and cactus scattered in the bright light– this truly was the most beautiful ride so far.

we climbed off our bikes around 2pm and pushed them a quarter mile off the road through sand and mesquite, constantly evading the dreaded jumping cholla cactus – those little buggers gave us such annoyance they even haunted erin in her sleep that night.  we set up camp out of sight of the highway, dug a big fire pit and had infinite mesquite for fuel.  when the sun fell the heat turned immediately to a dry, piercing cold, perfectly illuminated by the extreme clarity of the desert moon.

waking with the coyotes and leaving erin cocooned in her bag i went on a two mile hike by my self through the changing darkness, black to blue, and gathered firewood for sunrise coffee and porridge.  i’m learning how to steal away from my companion for these brief moments of much needed solitude.  when she rose we packed up and continued our glorious decent.  after four days of riding alone on dirt roads and highway, we came to the military checkpoint where highway 3 meets highway 5.  the soldados asked to go through our bags and quickly realized we had nothing but dirty cloths, food and camp gear.  impressed by the preparedness of my surly big dummy bicycle and a gringo’s ability to speak spanish, they happily wished us luck along the way…

–we are gonna stay the next two days in san felipe, maybe leave on christmas but locals are warning us of drunks on the road so maybe we’ll wait till the 26th.  time to switch the tires from front to back – the rear is getting quite warn already and has some little tears from glass probably.  the front still looks brand new.

hearts from erin,
me too,

Baja California is traversed north to south by the main Transpeninsular Highway, which was unpaved until the mid 1970’s.  Today, it is trafficked by gringo tourists and locals.  Some long-range truck traffic is present, mainly serving the larger cities in the southern cape region such as La Paz and Cabo San Lucas.  South of Ensenada, a short paved road leads from the main highway to the town of San Isidro on the Pacific Coast.  This is a popular surfing hang, and is home to the aforementioned hostel with mixed reviews.

As secondary roads are paved at a rapid rate, now is the time to visit Baja. Plentiful backcountry riding opportunities abound. 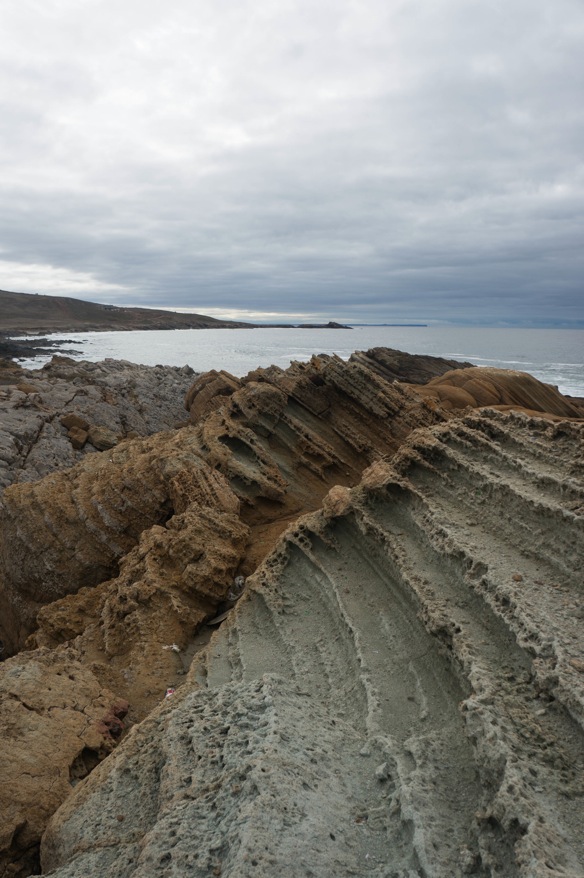 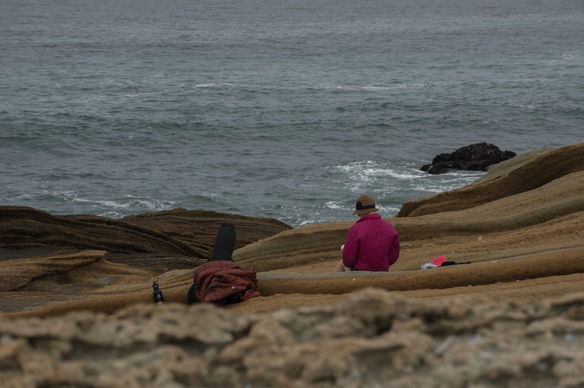 Returning to the main Transpeninsular Highway, or Carretera 1, a small dirt road crosses a low mountain range to connect with Hwy.  3, which eventually leads toward the Sea of Cortez.  This road can be found amidst farmland south of San Vincente along Hwy 1, and meets Hwy 3 at Lazaro Cardeñas. 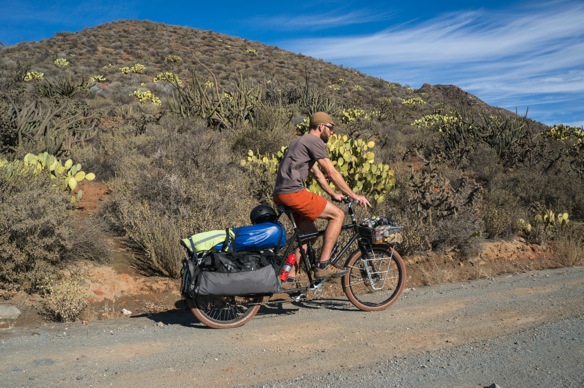 The road passes through farmland for a few miles, then narrows into the Cañon la Calentura and climbs nearly 1500ft to a pass.  It steadily descends the other side before settling onto an elevated plain near the town of Lazaro Cardeñas.  This is a great road, and a nice introduction to dirt road touring in Baja when approaching from the north.  From pavement to pavement it is a single day’s ride, although camping near the top of the pass is recommended. 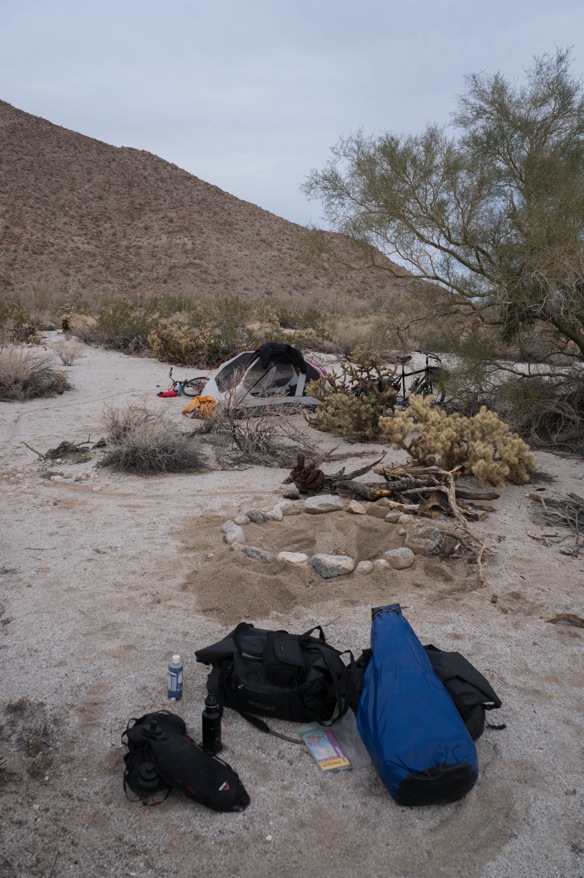 Highway 3 crosses the peninsula from Ensenada on the Pacific Coast to Hwy 5, near the salty marshes of the northern Gulf (Sea of Cortez).  Hwy 5 connects the California border near Mexicali (and Calexico) with San Felipe, a popular beach town to the south on the Gulf of California.  While San Felipe is a quick trip for many San Diegans and Arizonans, it is much more peaceful than Tijuana, Rosarito and Ensenada on the Pacific Coast.  It is one of many retirement/expatriate communities on the peninsula where Americans and Canadians seemingly outnumber Mexicans in winter.

Erin rides a vintage Specialized Stumpjumper, re-imagined with an more upright position and versatile 26×2.1″ Continental Town and Country tires.  She asked me how she might free some space in her panniers and balance her load toward the front of the bike.  Over the phone, I recommended she strap a drybag to the handlebars.  I was surprised to see it secured above the bars, presumably because it interfered with the exposed brake cable running to her front cantilever brake.  I like to think that it may provide a measure of safety in the event of a collision, like an airbag. 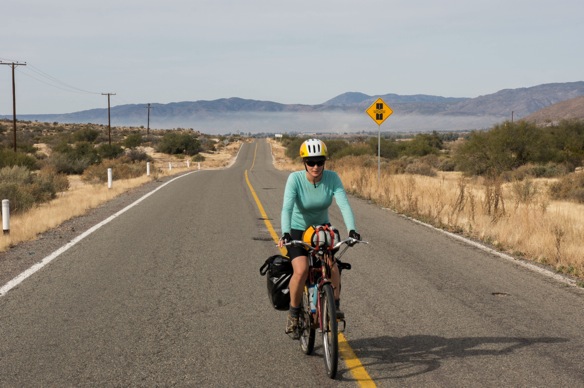 Camping along the shallow waters of the northern Gulf near San Felipe.  South of San Felipe, past Puertecitos, the pavement ends once again… 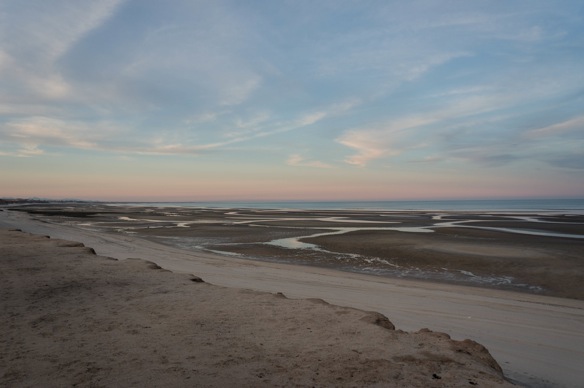 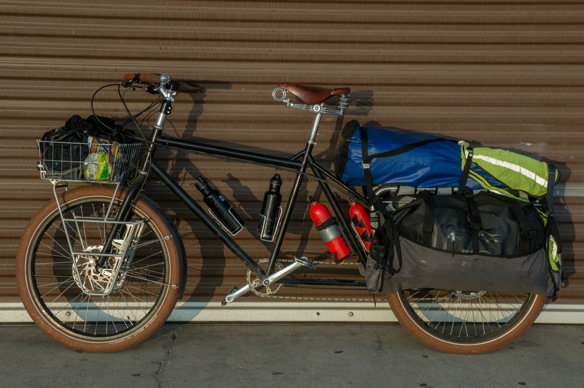 “…and that we did, after a relaxing, gradual drop down such a grade of road that would make any cyclist blush.  hardly ever needing to pedal, banking through mellow canyon turns and cruising along smooth highway in high gear, shooting off into great expanses of only more sand and cactus scattered in the bright light– this truly was the most beautiful ride so far.”