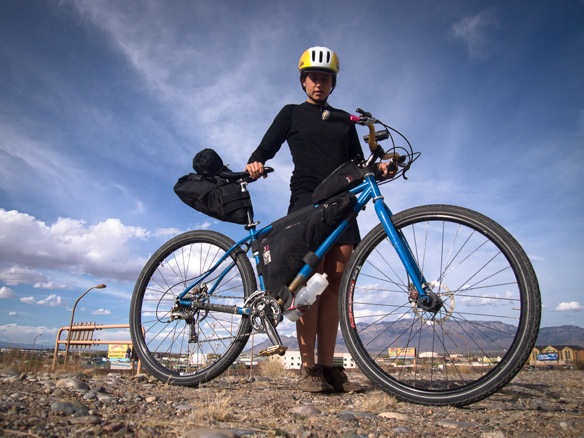 Lael, riding to the start of the Cedro Peak 45km Ultramarathon

When an opportunity to enter a local ultramarathon arose, Lael immediately suggested that she could ride to the start, camp out, and run the next morning.  That was several months ago.  This past Friday we rode twenty miles out to Tijeras at sunset.  In the dark, I turned around and rode home through the city, bombing down old Route 66 amidst grit and low-budget glamour passing fresh stucco strip malls and crumbling motels.  Lael continued another ten miles in the dark, uphill, to a secluded picnic area where the race would start the next morning.  She lay down, slipped into her bivy, and arose in the dark to officially sign-in at 5:30AM.  Cold, she returned to the sleeping bag to stay warm while waiting for the start.  7AM– lose some layers and line up at the start in a ratty cotton tank top, athletic shorts and old-fashioned running shoes.  No tech, not even low-tech– no trail running shoes, no gels or technical fabrics.  Nothing but a few sips of water and a Big K Cola about 5 miles from the finish.  Forty five kilometers, 4000 ft of climbing, and twenty-six minutes ahead of the next female finisher, Lael won the 45km race.  Around noon, they tapped the keg and she sipped a beer while waiting in line for a complimentary hot dog.  She didn’t know anyone there and I couldn’t be there to watch, so she hung out with some mercenary bike cops responsible for trolling the course, which was composed almost entirely of rocky, forested singletrack around Cedro Peak.  And then, she rode home.  Lael races about once a year.  She often finishes third, which is pretty good for a sometimes racer.  This year she finished first.

Lael has big eyes for the world.  Follow our adventures in Europe this summer from her perspective at Lael’s Globe of Adventure.

18 thoughts on “Ride to the start”