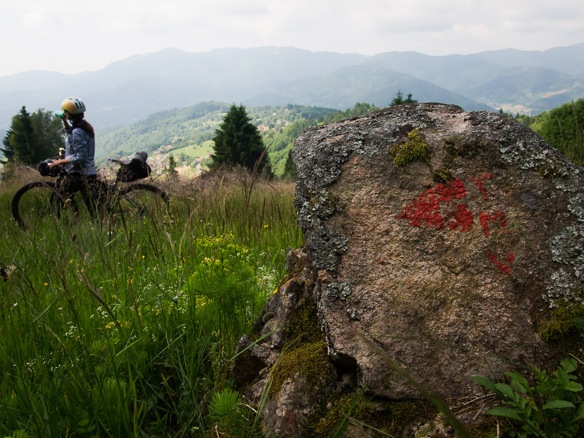 Divided into three segments, the southern third of the Traversée du Massif Vosgien (TMV) comprises the most mountainous stage.  The granitic southern Vosges is most visited, both in summer and winter, and challenges riders with climbs nearly as great as 3000 ft.  For more details of the route, I’ve shared words and images from the previous two stages: from Wissembourg to Saverne, and from Saverne to Châtenois.

This stage is defined by the rivers crossed and the ridges crested– thus, major descents and climbs, valleys and vistas.

We begin by leaving Selestat near Châtenois.  Selestat is the larger town a few km off the route, with access to the TER Alsace train and connections to further destinations.  We dropped Andi and his Pugsley at the train station; tended to some necessary affairs, including laundry and bicycle maintenance; and returned to the hills before the end of the day.

Climbing, loaded with treats such as local cheese, wine, and bread. 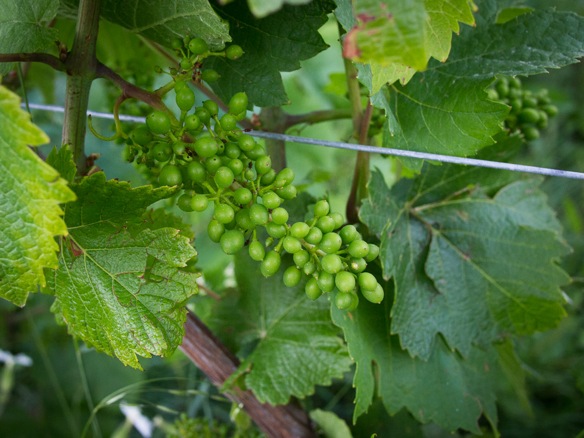 The climb reaches a plateau, where we camp for the night.  Castles can be seen on multiple hilltops nearby.  Shelters such as these are maintained by local hiking clubs.  Lael’s new Opinel knife is the first of many birthday presents given during the week. 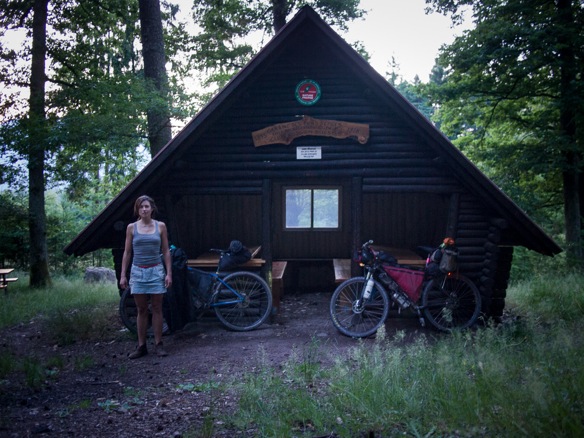 The next day, climbing towards 1200m.  Abundant logging and managed forests account for the complex of forest service roads, most of which are closed to private motor vehicle traffic. 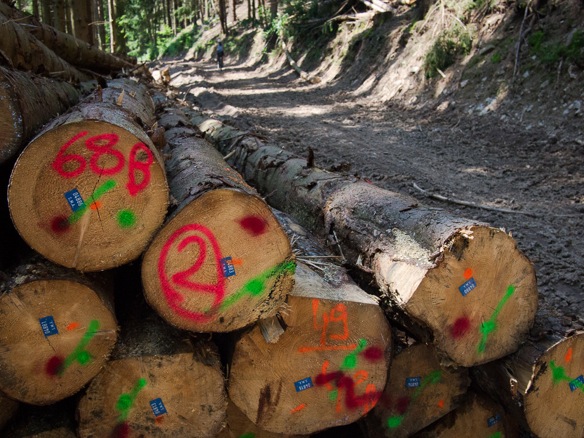 Most roads are durable hardpacked dirt, especially in the granitic southern Vosges.  The northern part of the Vosges are sandy, underlain with sandstone.  This road was recently tilled by the tracks of logging equipment.  In the transition zone between sedimentary sandstone and igneous granite from Saverne to Châtenois, we identify green, flaky metamorphic rock.

Cresting and riding the crête of the Vosges at 1200m, our highest point yet.

Abundant water sources are found throughout the Vosges, especially in the south, where less permeable bedrock and steeper hills account for more surface water. 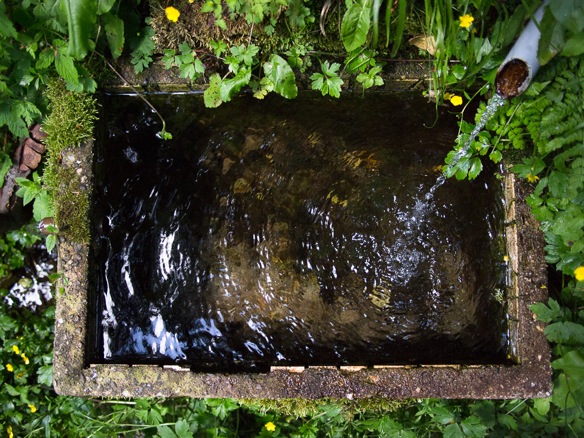 The TMV mounts more than 20 named passes, or col. Here, looking back toward the the last col we passed, on our way to two or three more in the same day.  This is called ‘pass hunting’ in French and Japanese cycling traditions. 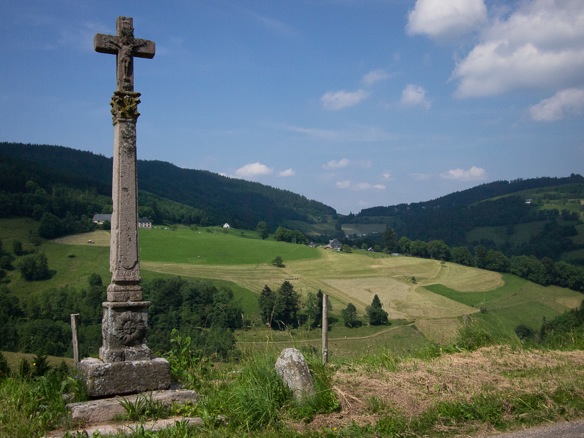 A bit of rough doubletrack catches our interest, between endless rideable dirt roads.

Intersecting many ski areas atop the mountains, we also encounter this downhill biking course, a growing source of summer income for ski areas around the world.  This one looks easy and fun.

This one looks impossible.

This, a little beyond our skills.

Near the top of the ski area is a huge winter refuge. 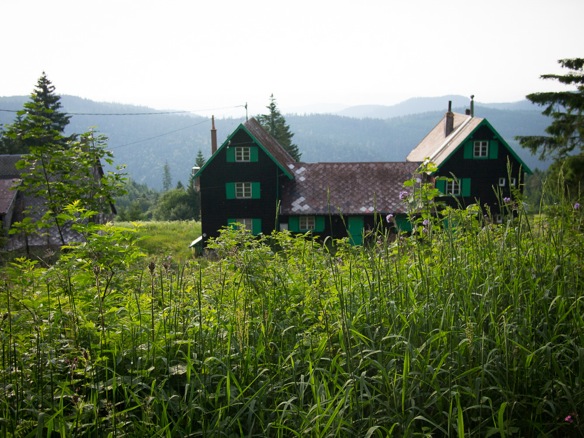 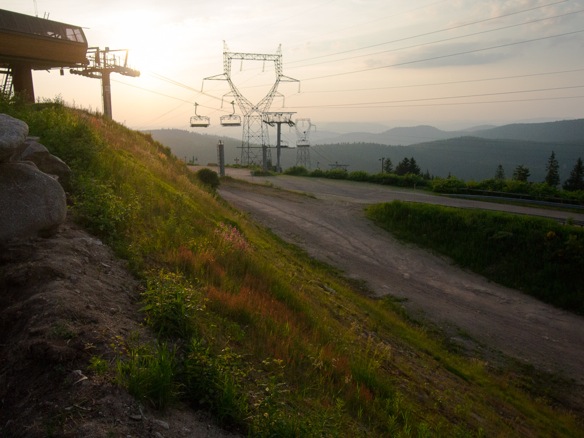 At the pass, we encounter a paved road, power lines, hotels, and the ski lift.  I understand why some people travel to the US in search of serenity, and the wild, but we don’t mind the the diversions from the forest and from riding.  Downhill from here.

This map section is called Les Lacs for the four major lakes along the way. 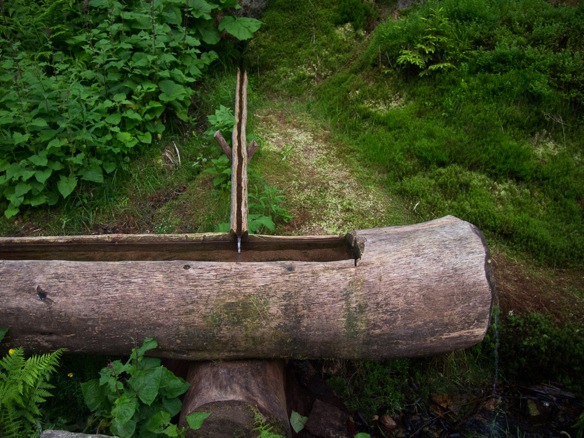 All four of the lakes are contained by earthen or concrete dams.  In some cases they provide hydroelectric power, and a fine place to have a picnic or cool off. 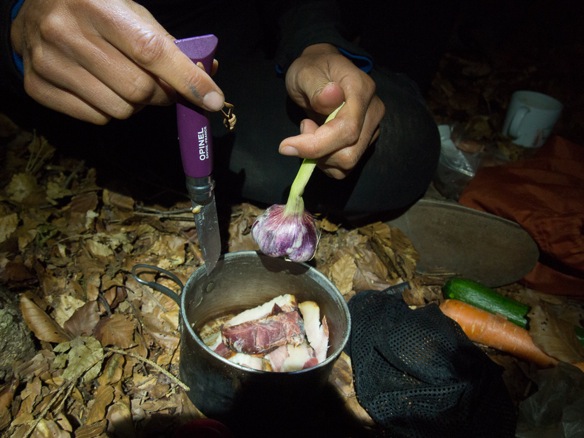 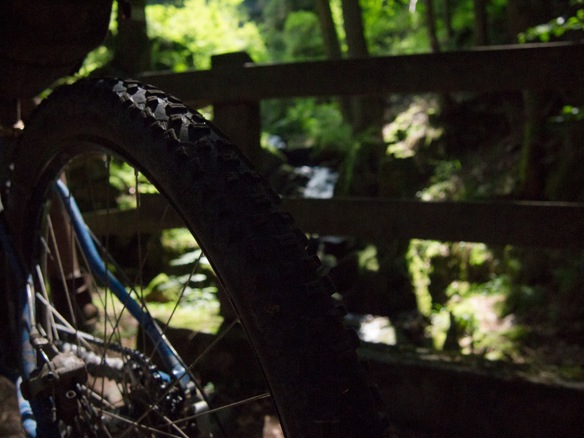 Streams and shade air-condition the forests, making a pleasant place to spend a hot July afternoon. 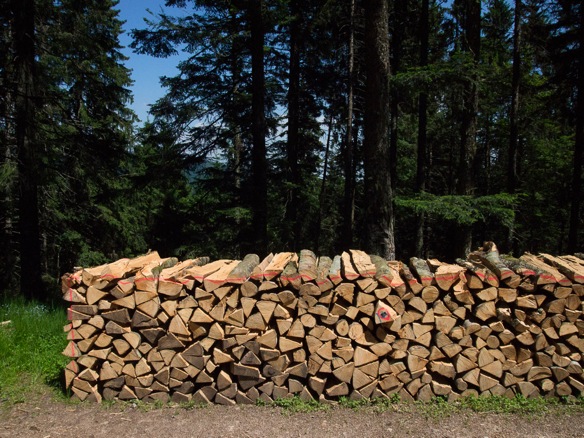 The final lake on our descent to the Munster valley, accessible only by foot or by bicycle, was the busiest of all.  Alpine scenery and clear water are the reason. 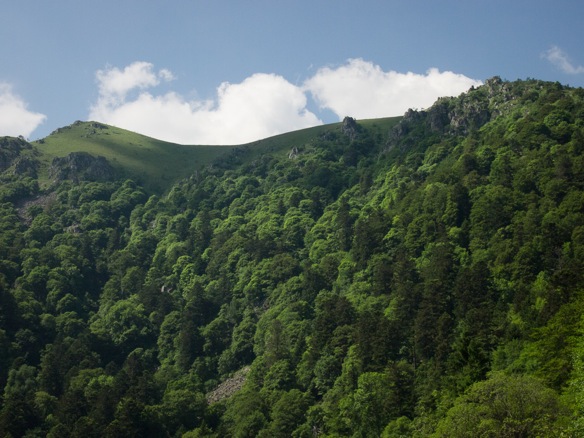 Climbing away from the Munster valley, home to the famed cheese.  I enjoy climbing in the evening. 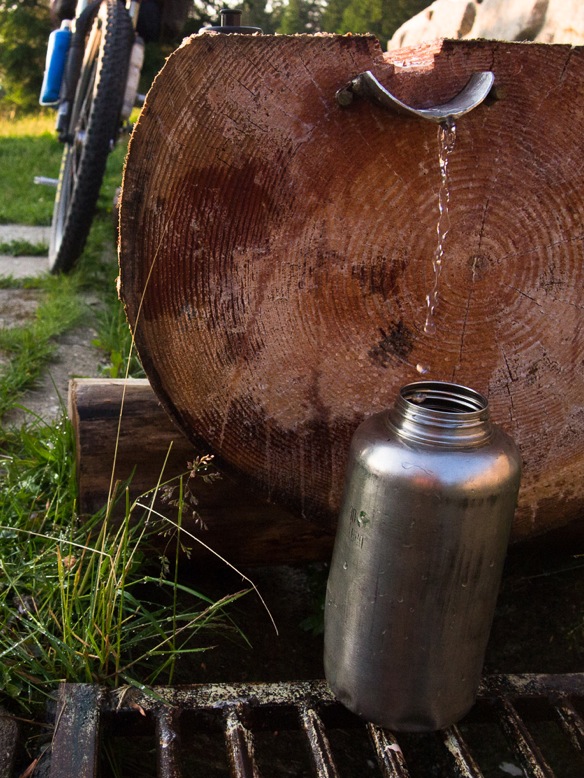 In the mountains, there are abundant hiking refuges which house as many as several dozen bodies in the winter.  In the summer, they may provide an option for lightweight travel without a tent.  It is possible to connect refuges and gîtes along the TMV for indoor accommodations and prepared meals.

Nearing the highest elevation of the entire route…

…on pavement, actually, but only for a km or two.

And our most spectacular campsite in the Vosges.  By morning, thick fog climbs over the ridge, enshrouding the mountaintops. 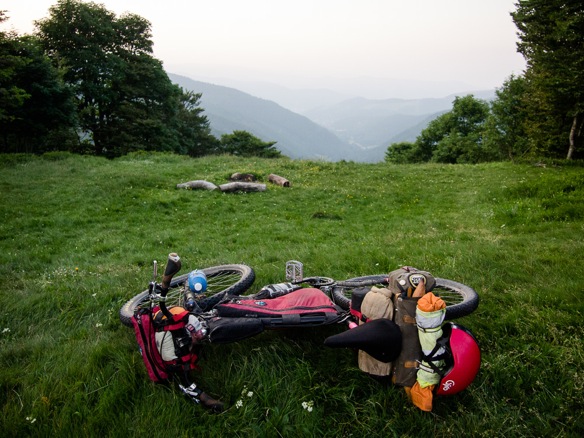 It clears by late morning for our second to last descent of the entire route. 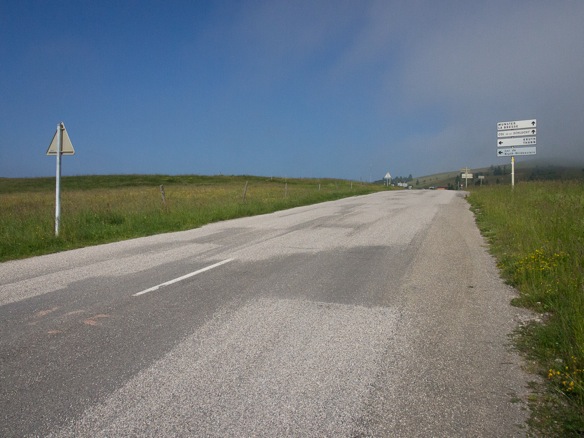 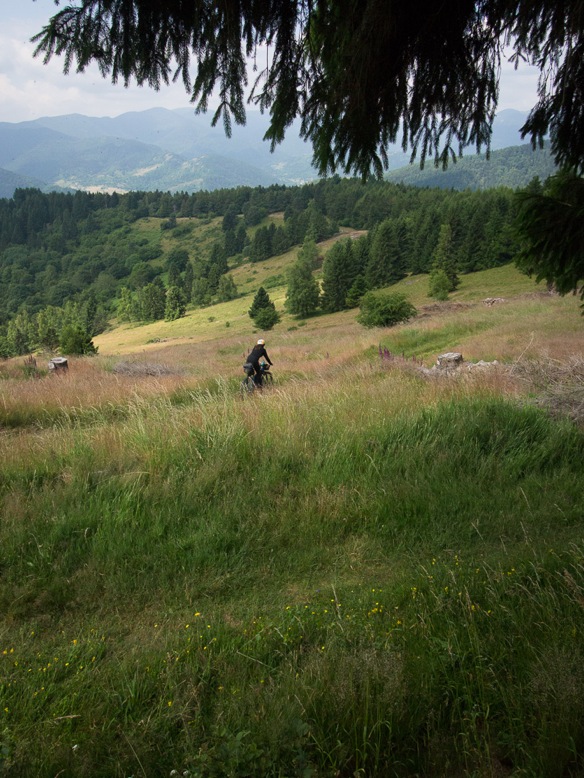 Arriving in the valley below, we are only 8km from the eventual finish.  The route favors another 22km through the forests in lieu of riding the roadways in the valley. 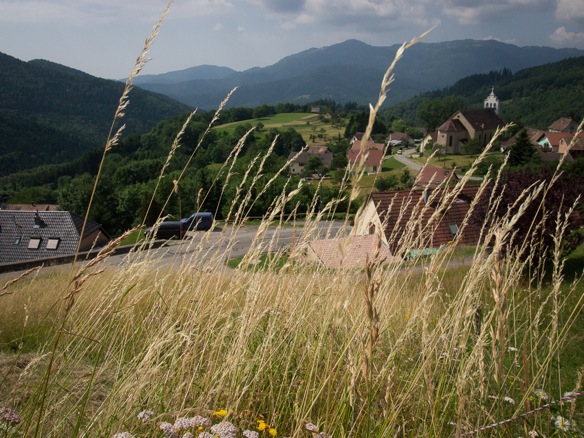 We fill our bellies and our bottles in Moosch for one final climb and one final descent. 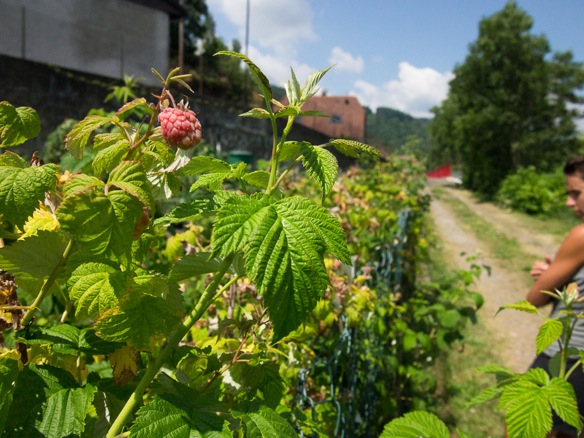 Climbing for the last time.

A well-used shelter awaits at the top of the climb.  Still early in the afternoon, we point our wheels towards Thann, only a few km away.

The eastern flank of the Vosges Mountains are home to all of the wines produced in Alsace, depicted here from south to north. 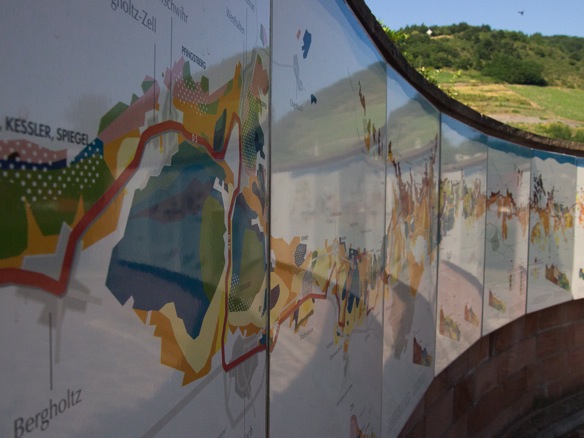 The same signage found in Wissembourg is also presented in Thann, over 400km away.  Continuing from here, one could connect either the Swiss or the French routes through the Jura Mountains, beginning less than a day away by bicycle.  For now, we have other plans.

Choosing a bicycle for the TMV is a simple affair, as any bicycle that accommodates a 2″ (50mm+) tire will suffice.  This may include a Surly LHT or an old ATB; a modern hardtail, full-suspension bike or even a fatbike.  Lael and I are both riding steel-framed mountain bikes with 29″ wheels, disc brakes and a wide range of gears.  Suspension forks have been valuable when exploring new terrain, but are not strictly necessary on the TMV as the route is mostly comprised of well-groomed dirt roads.  However, we have been happy riding with a suspension fork, which allows us to descend faster and tackle some more challenging rocky climbs.

People sometimes ask if a hybrid-type bicycle with 700cx40mm tires will work for such a route.  It may, but only if packed lightly, if the rider is skilled, and if willing to walk short sections of the route.  It also requires that you don’t mind bumping around on dirt roads with medium (-high) pressure tires.  We don’t, and thus ride big rubber at lower pressures.

You may have noticed that we are somewhere in Switzerland, Germany, or the Czech Republic, on our way to points further east.  Some superbrainstorm sessions have given us new direction, to be discussed soon.  For now, if you live in northern Czech, southern Poland, northern Slovakia, or western Ukraine, send a message (nicholas.carman(at)gmail.com) if you’d like to meet for a ride or if you may be able to assist our route-planning efforts.

10 thoughts on “TMV: Châtenois to Thann”

Leave a Reply to While Out Riding Cancel reply