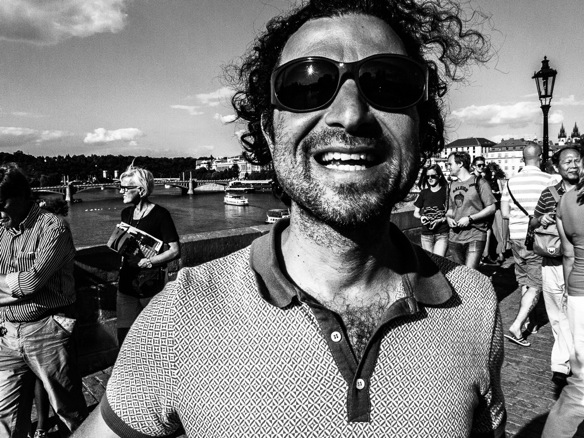 You know, Joe Cruz.  The ageless limitlessly energetic little guy that rode his Surly Pugsley through South America.  He writes– about his travels in South America and everywhere else– in an overunderwhelming manner where everything is amazing and everything is normal.  E-mail tells me he will be in Prague in a week.  “Unfortunately, we won’t catch you this time”, I tell him.

A day later, I reply again, “In fact, we are now prioritizing our Eastern European travel, and the chance to intercept you for a beer and a sausage”.  We take a train to the border of Germany and the Czech Republic, nearly.  Ride over the border on dirt roads, crossing a small wooden bridge into the country.  Then, we ride to meet Joe and Margaret.

Lael and I have been touring for years, over many tens of thousands of miles that we can’t recount exactly, on increasingly rough and rustic routes through hills and mountains.  To reach Prague in a few days, and to meet Joe, we accept the old-fashiond method of bike touring on roads, following road signage, and visiting town centers.  It is not a bad way to travel, especially in the Czech Republic, and we take to it with enthusiasm.  For us, as long as the roads are reasonably quiet, it feels like a vacation.  Covering distances rapidly– relatively– we enjoy a glimpse of the Czech Republic.

In Sumava National Park near the German border, we enjoy plentiful signage and quiet routes. 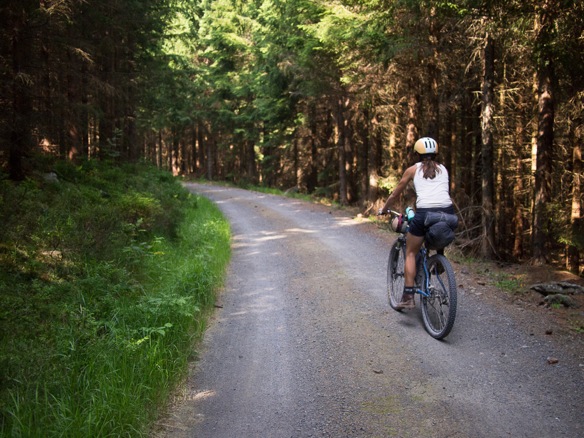 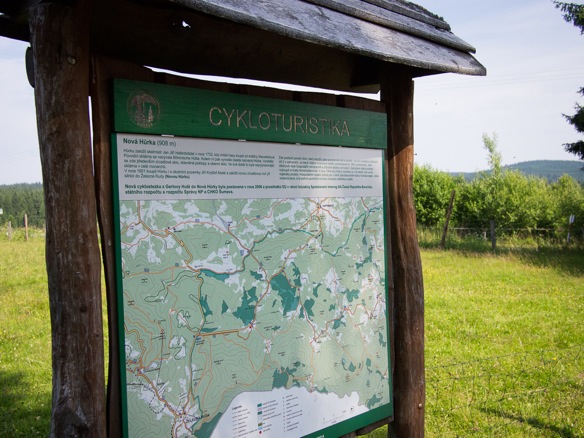 Churches and water are essential to a town. 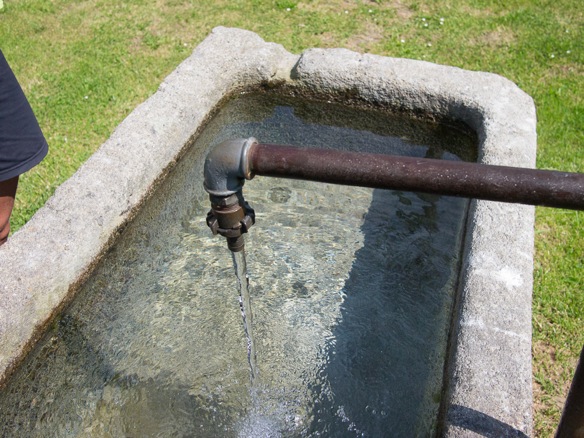 Wheat is essential to central and eastern Europe. 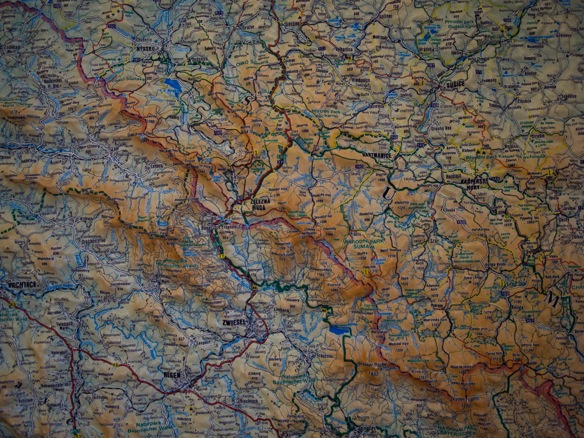 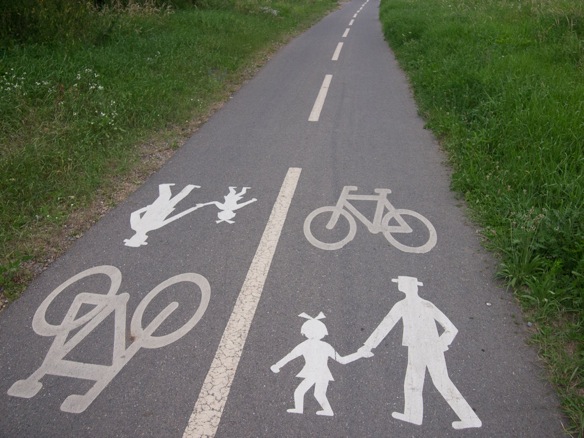 The Czech Republic is surprisingly progressive in other ways– below, featuring an array of solar panels– although the countryside often reminds us of the United States from the 1980’s, or the 1930’s.  Imaginatively, we construct our own histories of the country based upon what we see and what we know.  This is the act of ‘doing history’, although our version is seriously incomplete.  Travel instigates an interest in local history.  Along the way, we are learning. 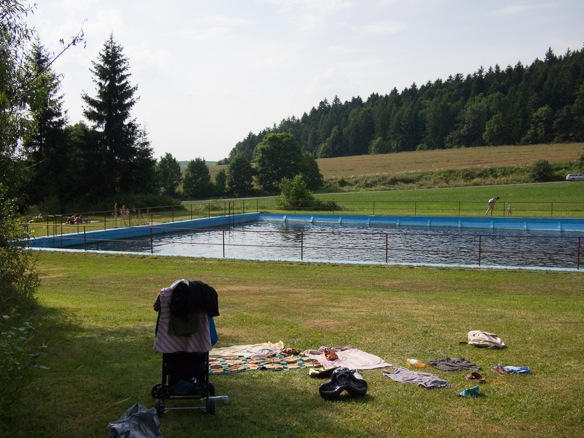 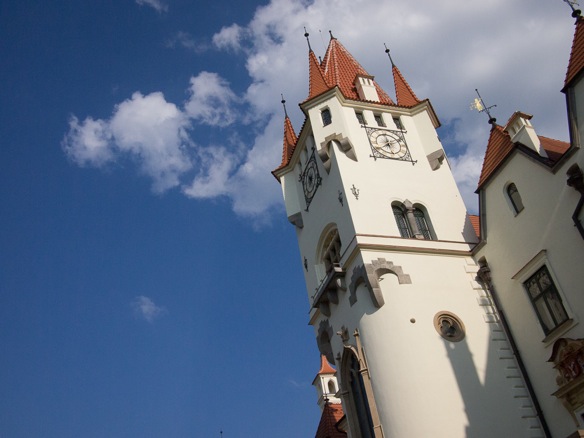 The month is called červen, which refers to the ripening  or reddening of fruits.  Cherries abound on the roadside. 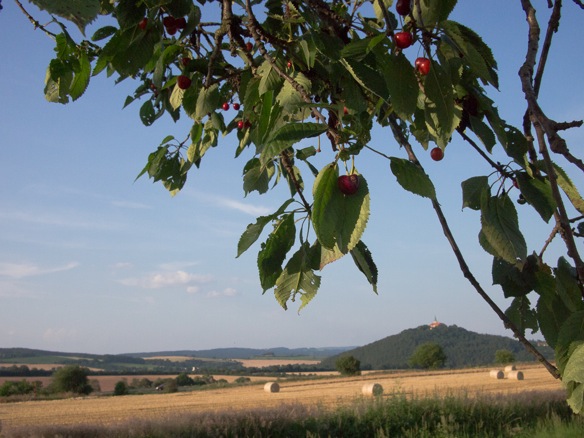 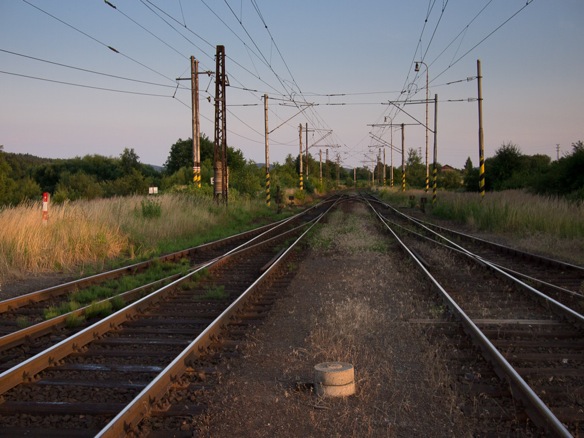 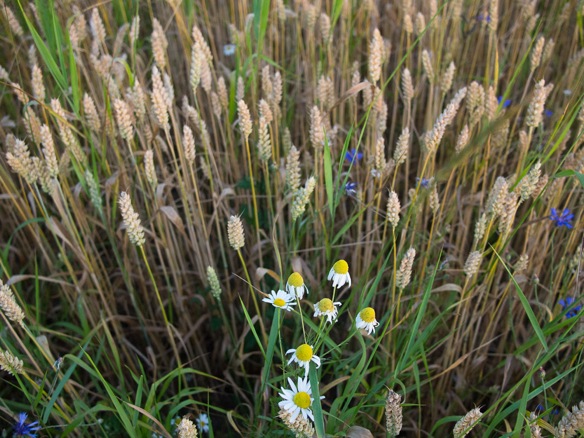 Czech cyclists are hardy– willing to ride through rough stuff and over big hills.  They sweat, unapologetically, and pack much lighter than German and Dutch cyclists.  With no more than basic camping equipment and the equivalent of a $400 hybrid or mountain bike per person, this group of eight men are traveling together for a few days.  Beer, at 10:30 AM, is completely normal.  We join them.  They discover sausages and sandwiches in their panniers, smoke cigarettes, and fart into the bench as unapolagetically as they sweat.  Small production frame bags are standard on modern Czech bikes.

Off the the post-lunchbeercigarette races!  Lael takes the lead.

Road signage, as in most of Europe, directs us to the next town.  With such plentiful signage, a basic roadmap allows us to orient ourselves.  Bicycle signage follows below.  Bicycle maps are free from tourists offices. 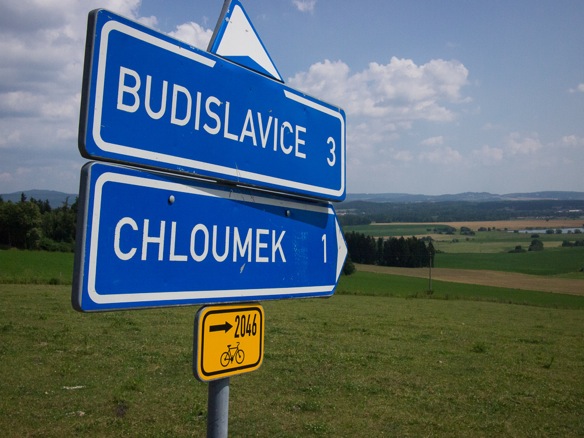 Nothing not to like, especially for an East Coast kid like myself.  The smell of cows and the look of expansive fields are home.

Czech wines are “emergent”, which is Lonely Planet-speak for ‘not that great’.  They can be quite good, although many eastern European wines tend to be sweet and unrefined.  These are not characteristics we distaste in everything.  ‘Sweet and unrefined’ may describe many rural Czech.  We love it here! 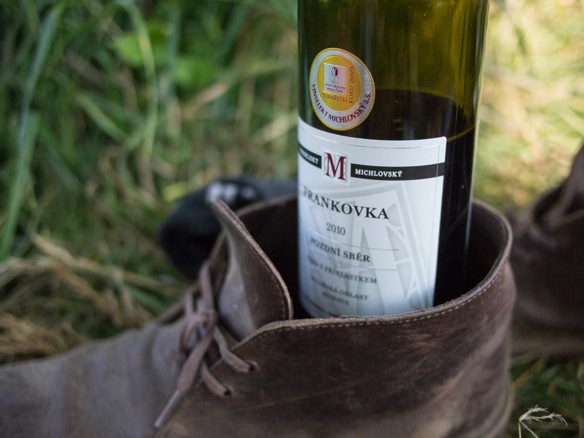 Suburbia exists, entering a smaller city.  We still wonder what wonders Prague will bring.  It holds power amongst Europeans, as if a ‘Paris of the east’. 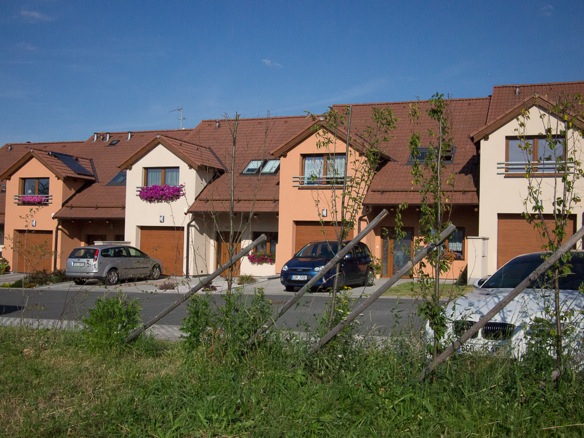 Despite familiar brands and flavors, we mostly subsist on sausage, cheese, rye bread, knudel, and sauerkraut.  Add pivo and onions for an authentic trailside meal.  Poppyseed– a staple of my Ukrainian-American youth– finds it’s place daily.

Czech towns are brilliant.  Despite an enculturated modern atheism, churches stand at the center.  Lively bars serve as the true town center, where important decisions and discussions are held.  Pivo is about $1 in the countryside, although it is twice as much in big cities and touristic centers.  At 4.2-4.6% ABV, one can participate at any time of day.

Finally, Praha is in sight. 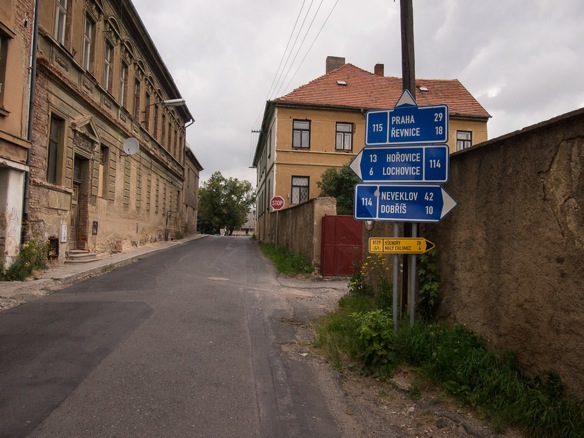 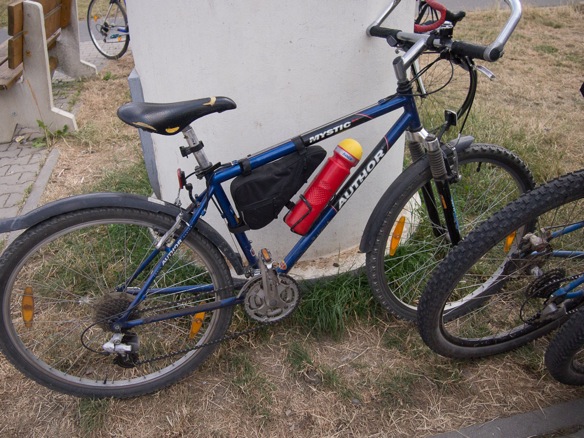 Our route into Prague includes a series of post-modern outdoor living rooms along the bicycle path.

But then the bike trail diminishes.  It reappears. 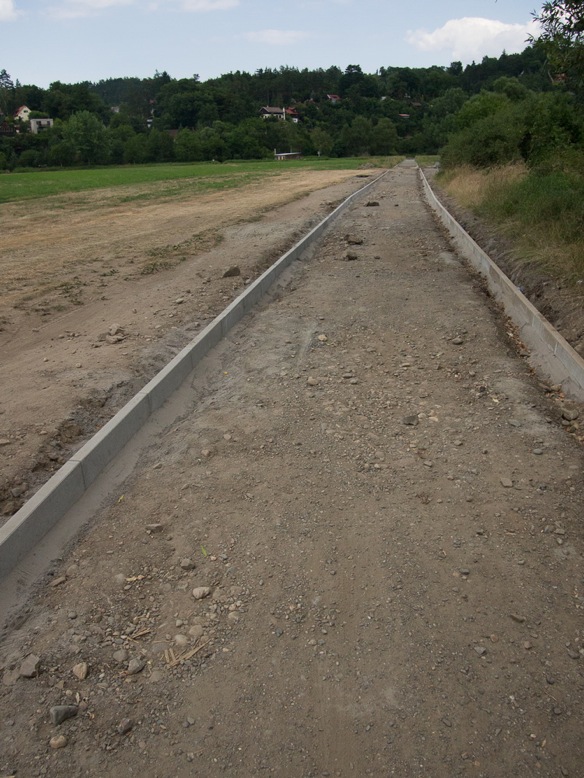 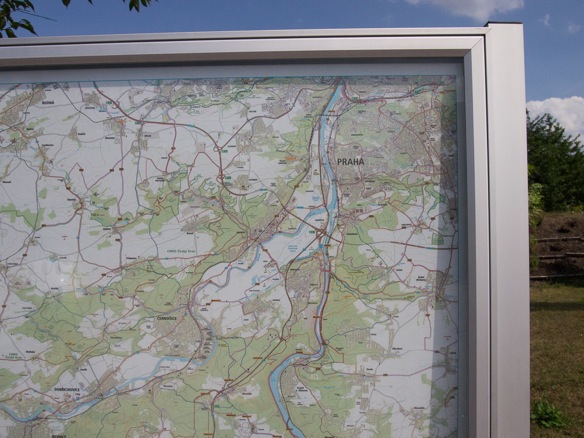 On summer weekends every town promotes small events, this one a bit more Black Sabbath than anything else. 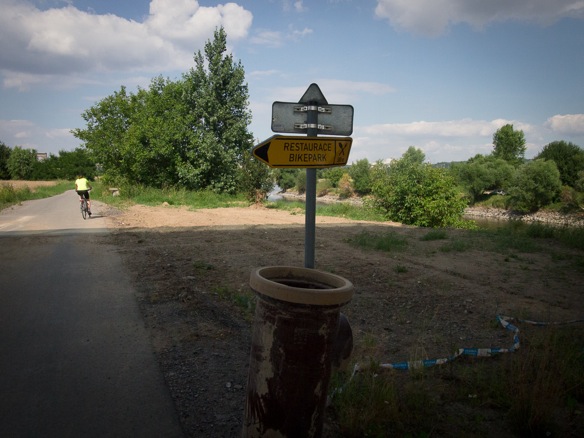 Flood remains (look in the tree).

Graffitti– Fuck you!.  These images inform our perspective of Prague as we enter the city.  Despite– absolutely– despite, what the old part of the city brings.

Enter Prague at warpspeed on our way to meet Joe and Margaret. 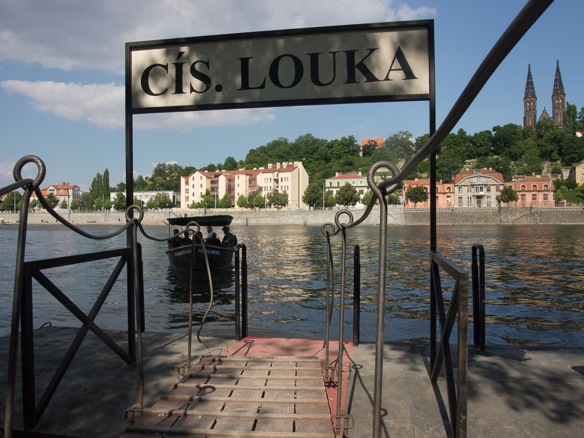 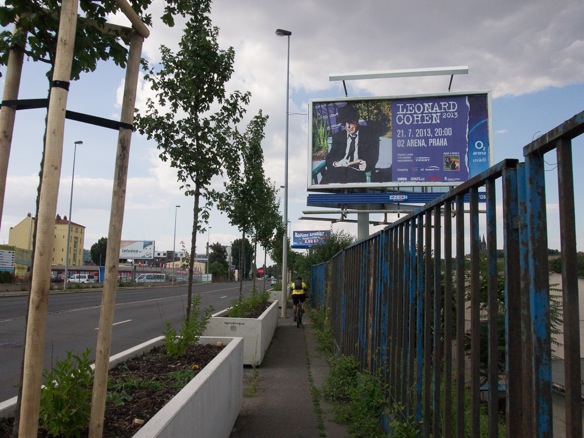 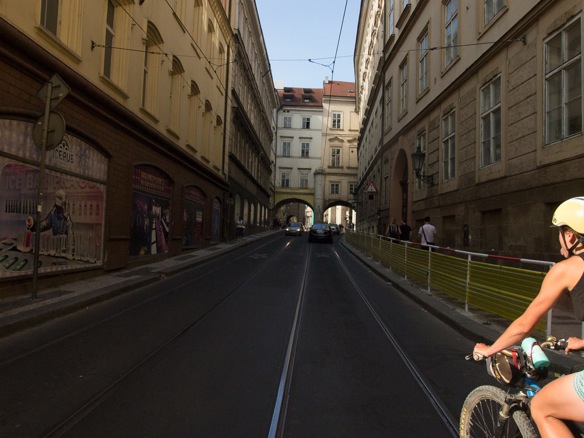 At 5PM, we stop outside a McDonalds restaurant in the city to check our e-mail, and refer to online maps.  I receive the following e-mail.

Hope you slept soundly in the woods nearby last night. We’ve been walking around Prague for a half day. It’s an inspired mix of history, charm, and tourist shitshowmania. We’ve held off exploring much by bike, figuring you might like to join us in that. Hard to tell, really, how bike friendly it is; much less so than Vienna, for sure.

Anyway! How about a plan to rendezvous. The easiest, if it works, is to call my mobile if you can.

Let’s have a backup plan. Let’s meet at the Gothic arch on the Charles Bridge at 5pm. We’ll go there and wait for at least a half hour. 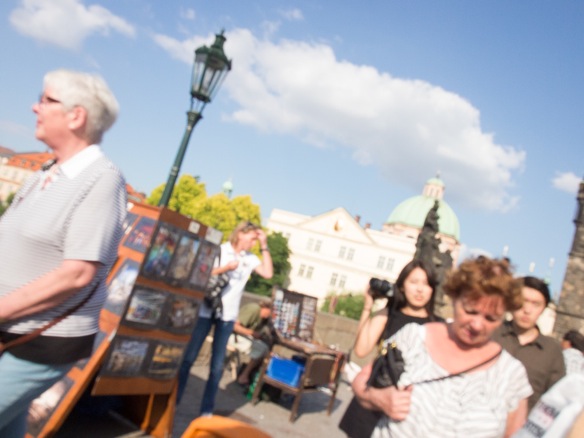 Finally, as I lose my focus to a blind performer of questionable skill along the Charles Bridge, I find Joe.