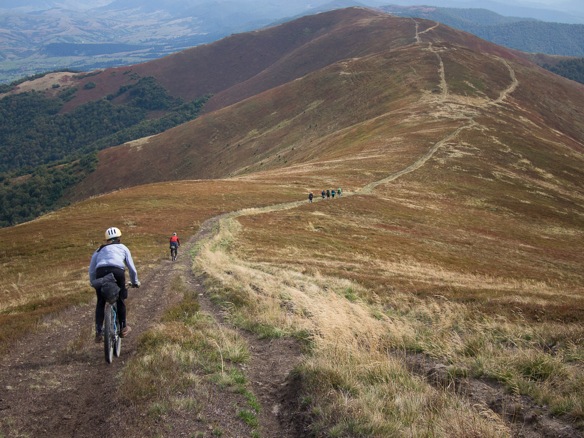 From looking at a road map of the Karpaty Mountains in Ukraine, you might not realize that this area is so hard to access for most tourists.  Without a capable vehicle and a bit of time, some mountain destinations may be several days from Lviv, which appears relatively nearby on a map, as the crow flies.  Luckily, we have both time and capable machines, although several weeks of wet forecasts are closing in which threaten to stymie our time here.  Thus, our sights are set on riding one of the region’s polininas, or alpine meadows.  We begin from Volovets, riding up a series of roads marked as hiking routes that climb to nearby peaks.  Volovets is a popular starting point as it lies on a direct train line from Lviv.

Passing a series of colorful above-ground pipes piques our interest.  These appear to be gas lines.  Clear plastic packing tape has some integral role in holding things together.  While we laugh at such things, it also amazes us at how resourceful people are– collecting wild food, reusing plastic containers, and even repairing bicycles to keep them riding for decades. 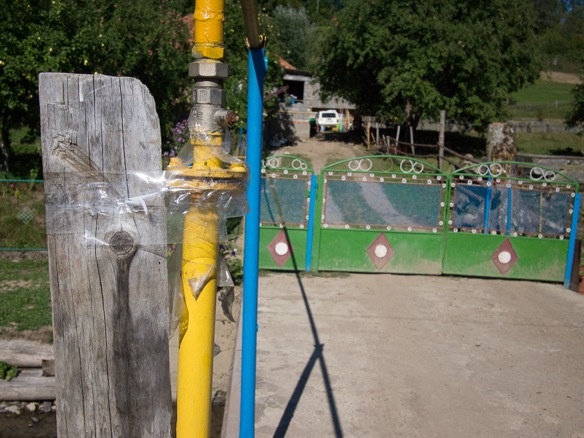 This bicycle, for instance, has been welded five or six times– once on the left chain stay, once on the down tube, twice on the fork to install the rack mounts… 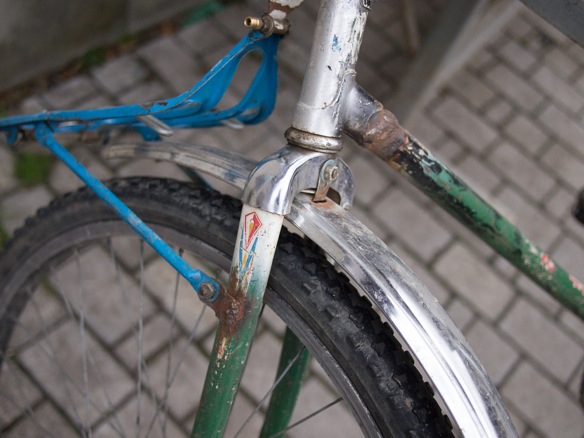 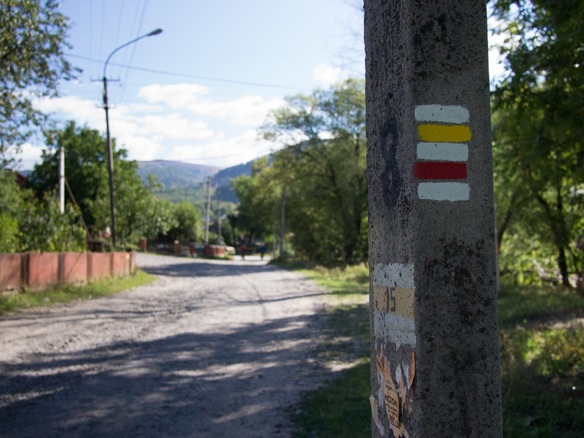 Climbing– a series of active logging roads and old service roads.  Some of these routes would be challenging when wet.  Some roads are barely roads anymore, due to erosion and logging equipment.  Some roads are simply forgotten.

The major part of our climb is on a high quality road, gaining elevation at a steady rate in the shade.  The total climb is about 1000m, or 3000ft.

This is the last water source we know of before camping and riding above treelike.  We fill all of our bottles.  Lael and Przemek each have a 2L Platypus bladder for such situations.  Cooler weather means we won’t burn through drinking water too quickly– another reason I love touring in the fall.

Now, where to hide 2L+ of water.  Low and center– it fits in the lower framebag compartment! 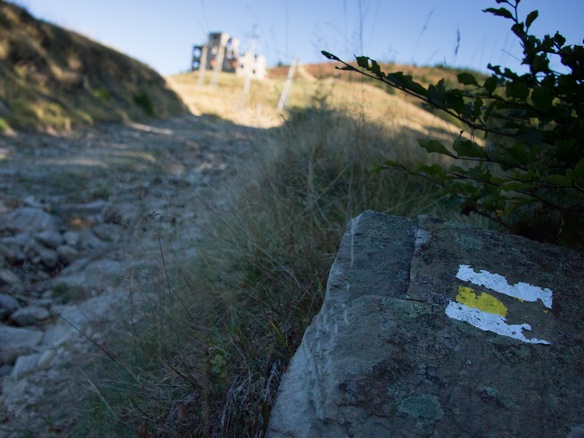 The abandoned structure is an old dairy, nearly 500m above Volovets. 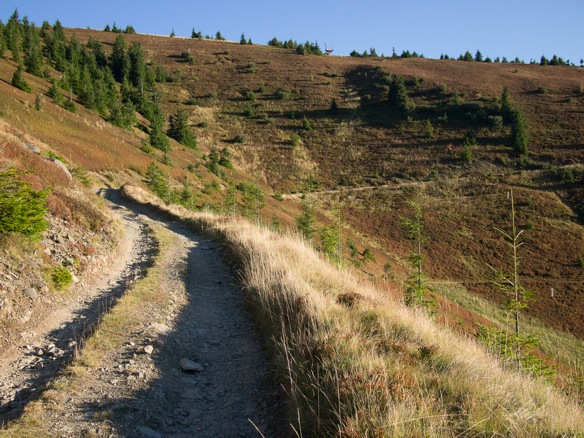 We stop to address Lael’s rear tire, which has begun to lose pressure.  The non-Snakeskin version of Schwalbes mtb tires are lightweight and pliable, although ultimately not ideal for tubeless installation.  We inject a shot of Stan’s sealant into her tire; Lael lightens her load with an early-evening nip.  She is committed to managing her packed weight. 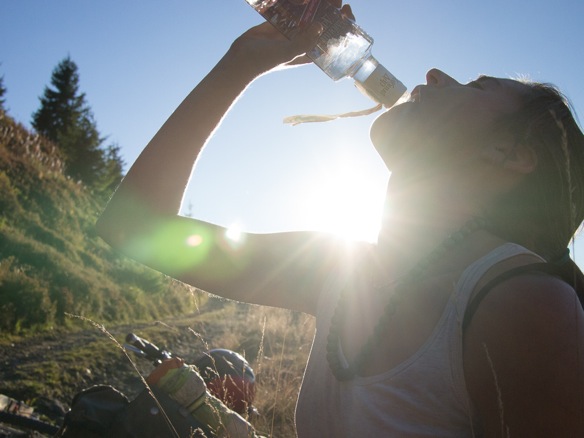 Back on the bikes, we shoot for the the peak of Plai, which sits just below the two taller peaks on the ridge. 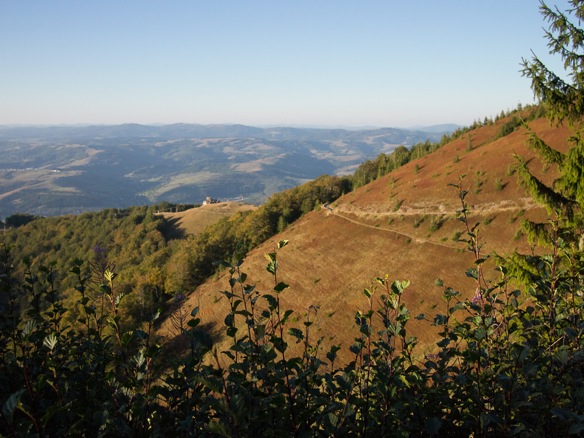 Up to 1300m, to camp in the shadows of the weather station. 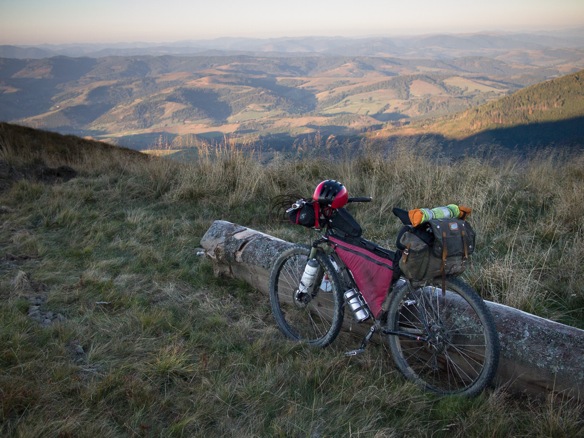 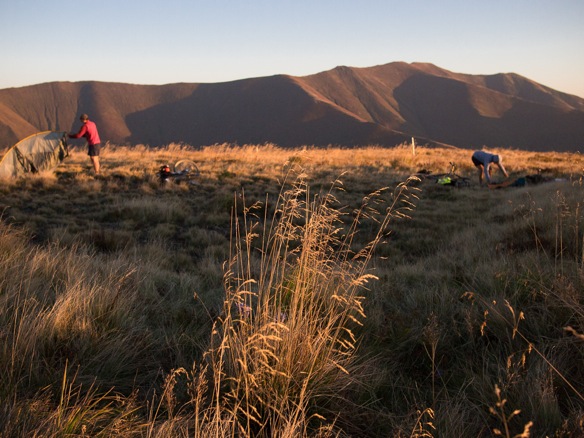 The best camp of the summer, near the end of the season. 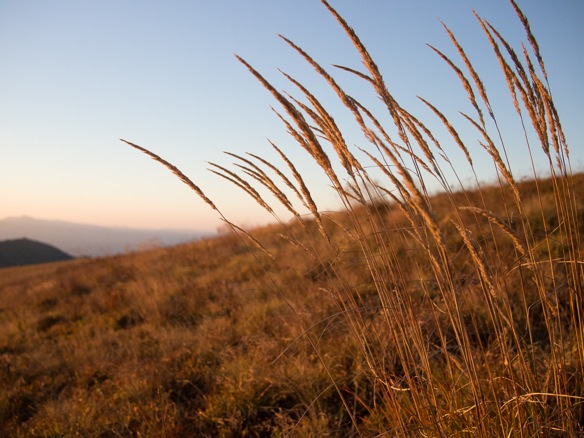 We are rejoined with some back-up tent parts, which is comforting.  Including some repairs and replacement parts, we’ve been using the same tent for exactly five years and about 800 nights– the Big Agnes Seedhouse SL2.  The interior mesh tent body that my mom brought to replace the damaged one had previously been repaired by Big Agnes in Steamboat Springs, CO.  Two zipper sliders were replaced and a tear was repaired, all for a modest fee. 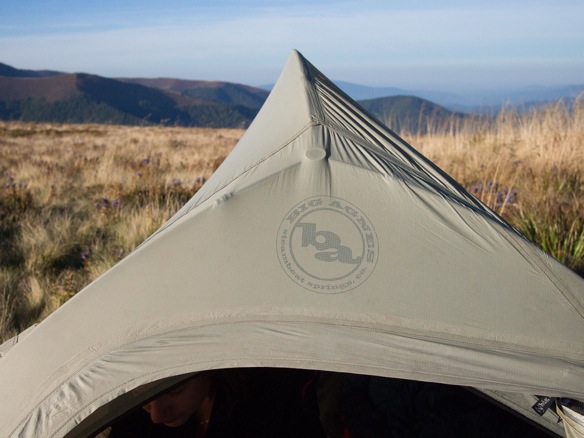 We begin the day downhill, to the saddle, followed by a steep ride/push to the top of Velykij Verkh.  I wish every day would start this way.

Looking back on Plai, pushing up .

Better to push at 1500m than to share the road below.  It is fun to think about how long it has taken us to get to this point– how our bikes have changed, and how our riding has changed. 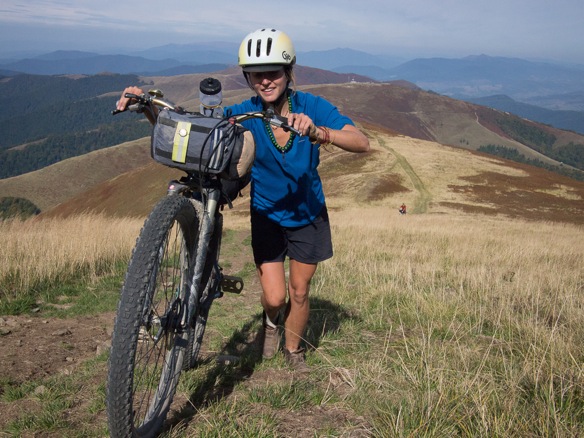 Singledoubletrack turns right toward Stij.  We turn left ’round the mountain, to follow the main ridgeline.

Our route for the afternoon. 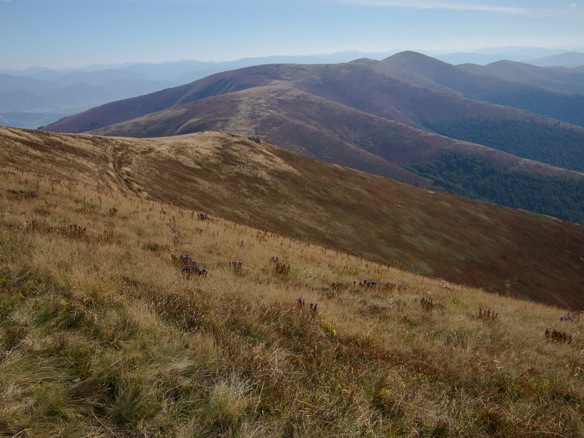 Looking back, a short road makes a detour around the peak, while a steeper route climbs over the top.

Riding along the ridge, along the polinina, is one the best rides of the summer.  The route is easy to navigate, the singledoubletrack is highly rideable, and the ascents and descents are challenging.

The ridge is shared with an occasional all-terrain vehicle, like this Russian-made Lada Niva.  Hikers and parasailers also populate the ridge in summer.

Signage like this is uncommon in Ukraine, but will develop in the coming decades. 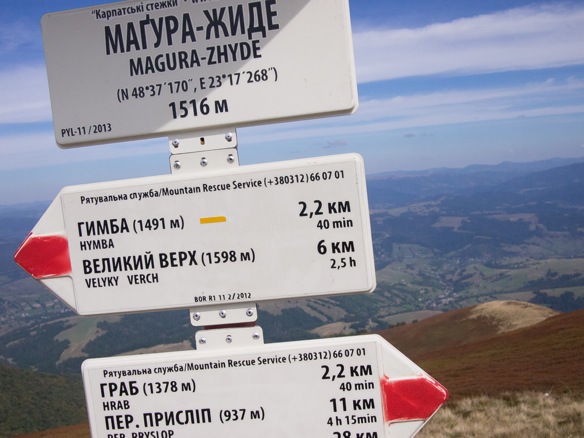 Lael likes this kind of thing, a lot.  After a few days away from real mountain biking, she gets really excited to be ‘shredding’ again.

We pick a line down the mountain, to find water and camp for the night.  Storms are coming.

As almost everywhere in Europe, every descent ends in a postcard village of the region.  This is no exception as we pass sheep herders, couples cutting hay, and cows grazing.  The town is littered with fruit trees and flowers.

This mineral spring tastes like iron and sulfur, but is naturally gaseous.

Old Soviet-era tiling can be found at bus stops along the road, or on the side of building in town.  This display serves as a basic map, and public art.

We meet some bikepackers along the road.  We first met Stas and Ivan a few days ago– the guys from Kharkiv– and they are now returning toward the train to make their way home.  Ivan carries Soviet-era topographic maps encased in plastic wrap.

Mongoose mountain bike, backpack, and Soviet maps– no reason not to get out and ride.  We decide to camp together for the night.  Camping in the mountains of Ukraine is easy, and camping on private property seems to be accepted, especially alongside a dirt road or in the corner of a grazing pasture.

Looking for a place to camp?  A good method is to find a dirt road and ride uphill.  I remember the days when we toured on paved roads in valleys, looking for campsites.  This is much easier, even if a short climb is required.

By morning, the ground is saturated and cows are led back up the hill to graze.

These guys had planned to ride with another friend from Odessa, who claims some experience riding in the mountains.  He suggested they make a food budget to prepare their rations.  In his absence, they mostly ate candy and had a great time.  Planning for such a trip isn’t all that hard.

We ride together toward Volovets, along a potholed ‘paved’ road over a small pass.  This region is familiar with tourists, but is still mostly the way you might have found it some decades ago.  Lots of old women look at you with that look, saying, “what the hell are you doing and why are you dressed like a cosmonaut?”. 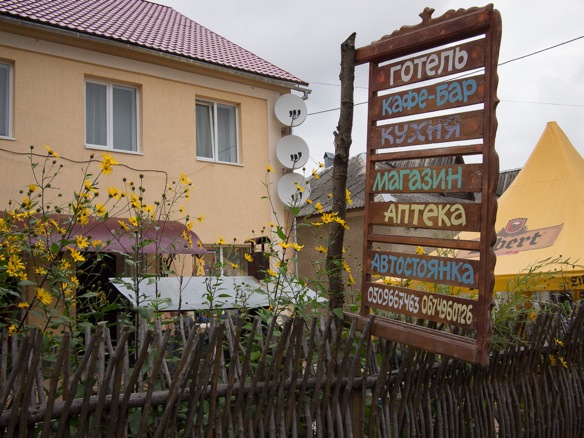 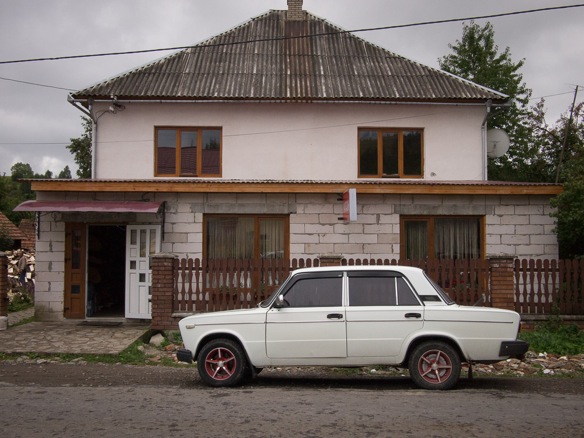 Each valley in the Karpaty has its own feel.  This one is quietly industrious, as the time is nigh to prepare for winter. 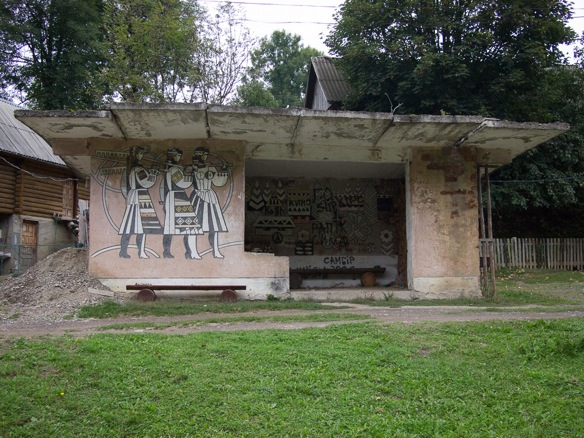 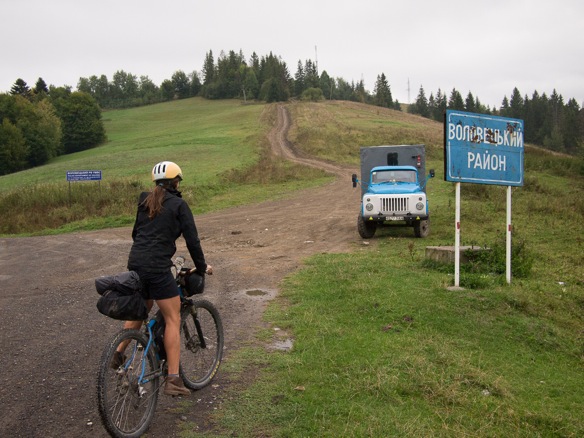 In Volovets, each group plans the coming days.  We hatch an escape plan that ensures another few weeks of summer.  Stas and Ivan ride a few more days before boarding a train back home.  They hope to visit a German bunker in the region.

Ivan also helps us source some alcohol for our cooking stoves.  Here, it is referred to as ‘spirt’ or ‘medichni spirt’ , available from the pharmacy.  No prescription is required, although you will have to pass the informal and judgmental gaze of the pharmacist.  Do your best to look sober and well-rested.  About $1 for each small 100ml bottle, which amounts to about $10 a liter.  This is outrageously expensive compared to the $2 we pay in French markets.  One quart costs about $6-7 in the US and Canada.  However, this is very good stuff– 96% ethanol, non-denatured, which means you can drink it.  We’ve heard from more than a few sources that it does the trick, and doesn’t leave a hangover.  I haven’t tried it yet, as I am only coming to appreciate the more palatable varieties offered at 40%ABV. In theory, this gives you fuel, liquor, and a disinfectant for wounds.

Loaded up on fuel, we say goodbye to the Karpaty.  We’ll definitely be back soon.  Ukraine is such a large country that we consider this a reconnaissance visit for future travel.  Traveling here is cheap, and our interaction have been lively.  American and EU residents are automatically granted 90 tourist visas to Ukraine.

The vokzal is our ticket to a neverending summer.  Train tickets to Simferapol should do the trick.