Krym is the English phonetic spelling of the Ukrainian name for Crimea (the Crimean Peninsula, and the Autonomous Republic of Crimea).  It will be used in place of  the name Crimea, which seems out of place to my tongue in reference to the Ukrainian and Russian names for this land. Additionally, while it is still common to hear “the Ukraine” , the Ukrainian government has officially requested that the definite article be dropped from the name, and official writing style guides have been adjusted.  Ukraine and Crimea are now the most common forms in English.  I will use the Ukrainian name, Krym, written in Latin characters.

Boarding a train in Lviv, we arrive in Simferapol 24 hours later.  Bicycles are not charged as additional baggage on Ukrainian trains, although you may have to convince the attendant that such a statute exists.  The bicycle is expected to be contained, such as in a proper bike travel bag.  A tent or several plastic garbage bags will do.  We arrived at the station in Lviv from a connecting regional train, with only 20 minutes to prepare our bikes and board the train.  The attendant in our car was less than happy at the pile of dirty bikes and luggage we hoped to load onto the train.  She insisted we couldn’t bring them on board.  She conferred with her cohorts.  She asked her superior.  He looked scrutinously at ‘all three’ (sigh) of our velocypedy.  He became disinterested and left.  Our attendant then decided on her own that we could board with the bicycles if we cleaned them off.

We grabbed greasy rags and removed as much dirt as possible, however, they were anything but clean.  Moments before the train leaves, she hollers at us to board.  “Or you’ll miss it!”.

Alright, alright, we’re getting on.

I suspect she just wanted to make us work a little– penance for not being prepared.  As we board, she smiles at us.  Ukrainian women like a good fight. 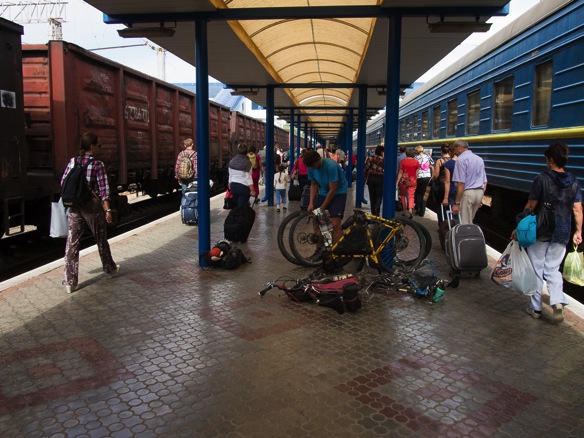 A third class sleeper (platzkart, from German) is the best choice when traveling with a bike in Ukraine.  First and second class sleeper cabins afford more personal space and privacy, although the luggage hold is not well oriented for loading and unloading a bicycle.  Third class cabins have a third bunk designed for storing luggage.  The open design allows loading and overloading– we readily stored three bicycle on two luggage bunks with wheels removed.  I can only imagine the kind of things that third class Ukrainian passengers have transported on trains.  This cabin space features six bunks, although only five spaces were used in our section.  During the day, it is typical to sit along the lower bench seat and to share conversation at the small table.  At night, slip into your Adidas track pants and slide into you upper bunk.  Plan ahead and get a lower bunk space if possible.  The price for a third class bunk on a cross-country 24hr train?– about $20.  By the end of the trip, you will feel like family with your cabinmates.

Second class cabins sleep four in a similar space, for twice the price.  First class cabins sleep two.  All cars feature a hot water tank for hot tea and coffee.  Black tea is complimentary on the train.  “Chai? How many sugars?”.  Ukrainian, like Russians, love sugar in their tea.  Some say that after sugar has been added, the teaspoon should stand in the cup on its own.  At major stops along the way, exit the train to purchase a variety of prepared foods including pyroshky (baked dumplings filled with potato, cheese, cabbage or meat), varenyky (filled dumplings, boiled), smoked fish, and sweets.  Cold beer is also on hand from entrepreneurial vendors.  Prices are competitive. 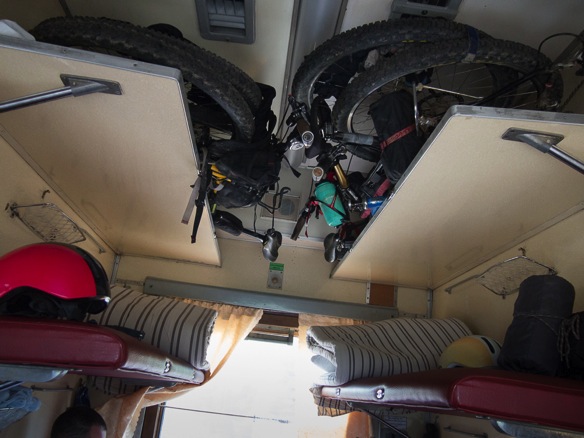 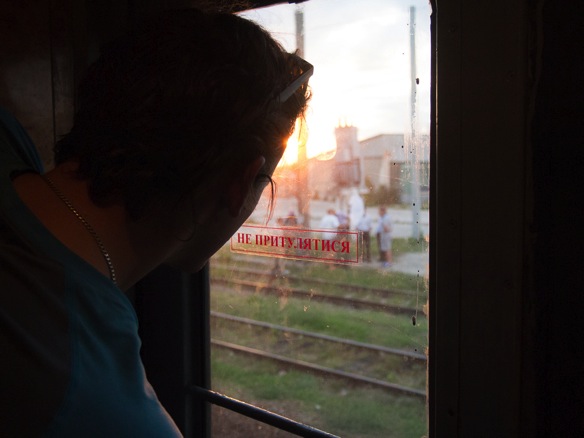 Arriving in Simferapol, we connect to a regional train to Sevastapol at the coast.  We have plans to meet a host for the evening, a keen bikepacker named Vital with extensive knowledge of the area.  Sevastapol is an incredible city, featuring historic armaments and many signs of wealth.  Sevastapol, and Krym in general, have long been the playground of the Russian elite.  Krym was part of Russia until after WWII, when it was annexed to the Ukrainian SSR.  Today, 50% of the population identifies as Russian, about 25% as Ukrainian, and 12% as Tartar.  The peninsula operates as an autonomous republic within the Ukrainian nation.  Sevastapol was largely a closed city during the Soviet-era, owing to its military prominence.

Sevastapol is beautiful by night, although after a day and half on trains, I’m apathetic about sightseeing and taking photos.  In the morning, Vital takes us for a sightseeing tour in the hills.  We ride out of town, past vineyards, over crystal waters on ancient aqueducts, and into the mountains. 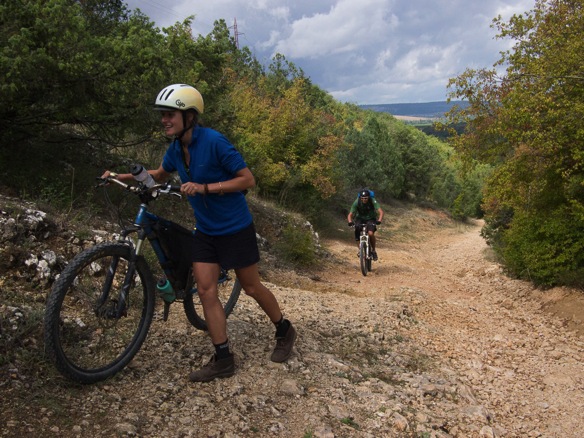 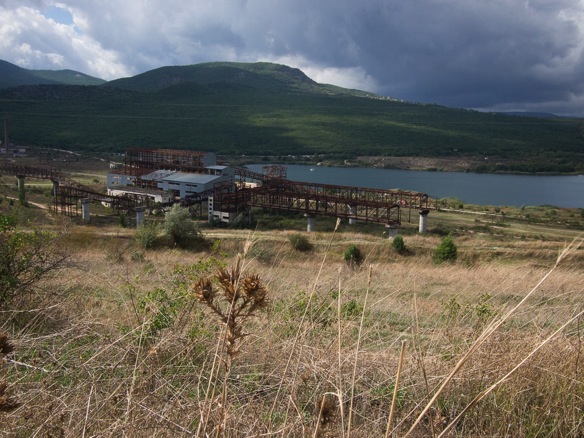 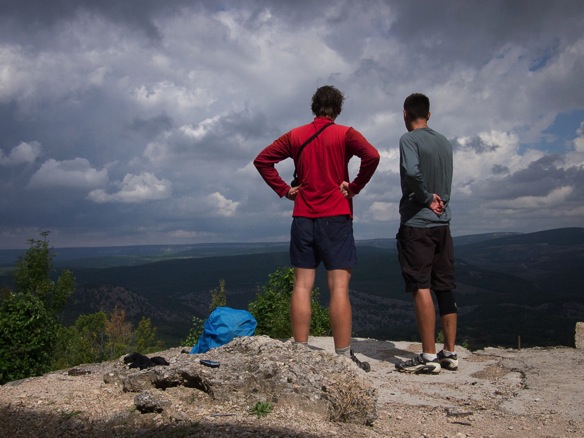 Our prize for the day is a visit to a Cold War-era bunker, unofficially open to the public for lack of a door.  From the outside, it looks like a boring concrete building, with windows painted on the surface to fool curious American satellites. 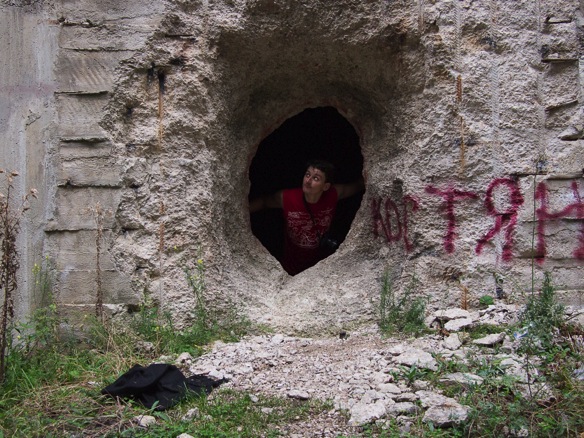 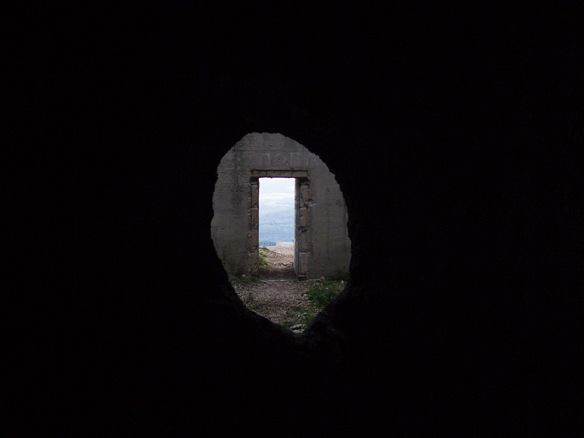 Corridors in all directions. 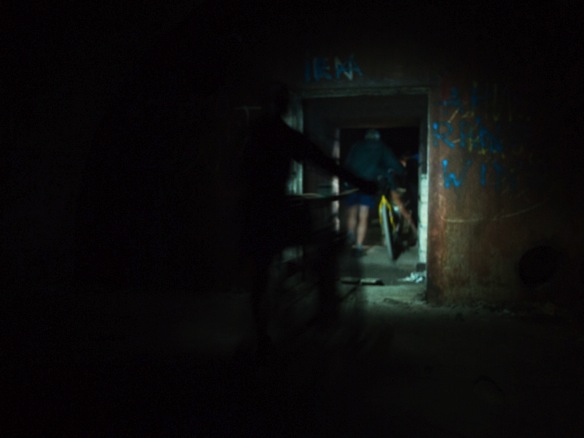 Leading to equipment storage rooms, and what appear to be housing for hundreds, or perhaps thousands, of soldiers.

Watch where you step, or where you ride.  Nearly every scrap of metal has been salvaged from the bunker, including manhole covers and staircases.  If you fall in, you are not coming out.  Headlights and dynamo lighting lead the way.  Any thoughts on the warning below?

Looks like a factory or an apartment building from the air. 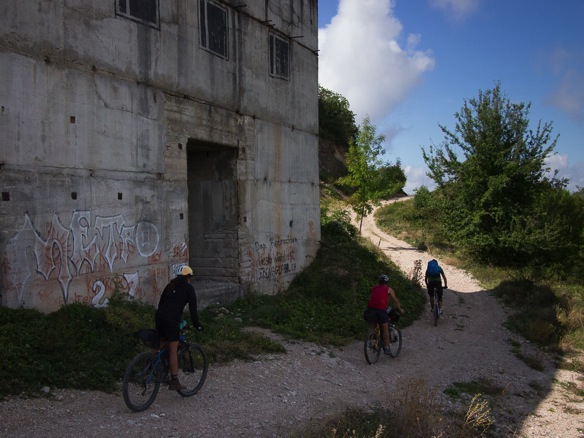 For contrast, a building with real windows, or at least a place for windows.

As Vital returns home, we go searching for the town of Balaklava on the coast.  We find a deep-water harbor with a narrow passage, well protected from weather and enemy attack.  The harbor was once home to a secret submarine base, now operating as a naval museum.  The town was almost entirely populated by military families, and visitation rights were difficult to obtain  Today, pleasure craft originating in Gibralter and Italy fill the marina, alongside local touristic watercraft offering an evening on the water.  Tourists abound, and as on any weekend in Ukraine, the bride and groom aren’t far away.  A trance festival is happening on a remote beach nearby.  A young man plays the didgeridoo to earn a couple extra hryvnia for the train home, or a sack of weed.

And yes, those beloved cold-weather head coverings– balaclavas– originated here.  English troops first used them during the Crimean War in the 1850’s. 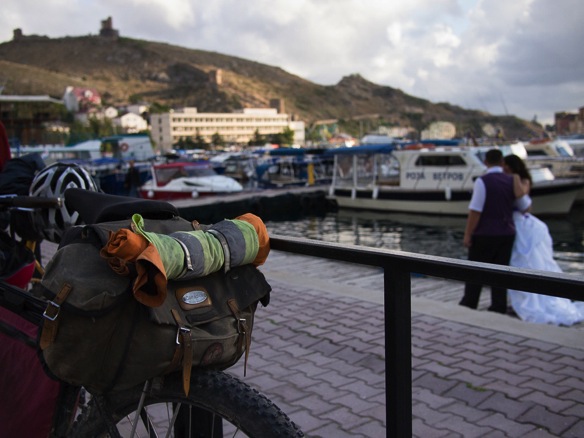 While navigating the waterfront trials course, Przemek pinches a tube riding up some stairs.  A nearby boat is blasting techno music.  Two dancing fools patching a tube receive a 1 hryvnia donation from a sympathetic Kievan girl on her way to the trance festival.  Homeless, peddling our bodies at the waterfront for a $0.15 donation– these are reasons for a mother to be proud.

Krym is responsible for producing most of the wine found in Ukraine.  Wine is also made along the mainland Black Sea coastline near Odessa, and in the Karpaty Mountains.  On average, Ukrainian wines are sweet.  Select a dry or semisweet wine to pair with a meal.  Dessert wines are also common.  Grapes are also grown on fences and trellises everywhere.  These traditional seeded grapes, as are used to make wines, are superb.  Several seeds are found within, and skins can be discarded after separating the meaty fruit from within.  The fruit is gelatinous, textured like a tapioca pearl.

Lael holds the best part of the fruit between her thumb and first finger. 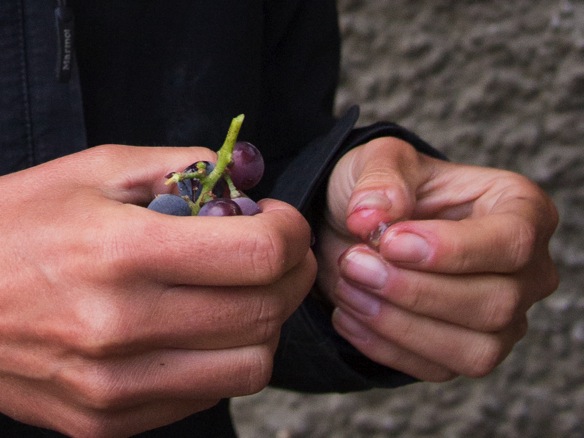 Riding back toward Sevastopol to beat the rain, we stop and laugh at this Soviet-era mural.  We interpret: in the future, our men will be cosmonauts and our woman, well, they will still be stuck harvesting wheat.  What a bright future.  Nowadays, Ukraine has a bright future. 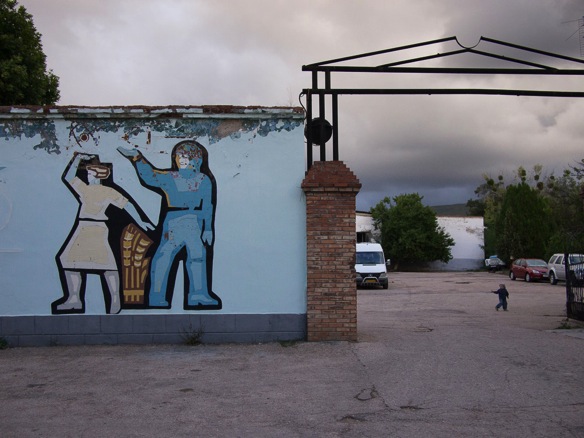 Our future, however, is best considered with the help of these maps.  These excellent trail maps are well-scaled for human powered travel, and display a network of hiking trails first established by Czech hiking clubs.  Two maps are available, covering most relevant terrain.  From sea level, peaks rise above 1500m.  Some promising routes are found on these maps, which each cost about $2.  Look for them at the excellent outdoor store near the train station in Simferapol, only a few blocks away on Lenin Blvd.  The market near the train station is a great place to buy fresh produce and Turkish delights.

Many thanks to Vital for hosting us in Sevastapol, and for his intimate knowledge of Crimean routes and trails, including some spectacular points of interest.  Not all Ukrainian bikepackers are riding  steel donkeys— his kit is dialed, featuring a locally made framebag.  Check out his blog, Burning Saddles (named after memorable trip with friends), for a tempting glimpse into the bikepacking potential in this area.  Google Translate dishes up some gems when translating this page from Russian– highly recommended. 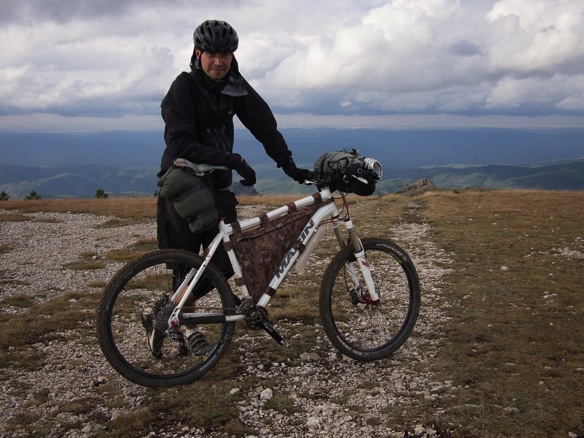 Looking for a little more lite reading?  Lael has a great post entitled “Bunkers and a bus stop”, cataloguing some of the more interesting concrete spaces we’ve encountered in Krym.

5 thoughts on “First days in Krym”