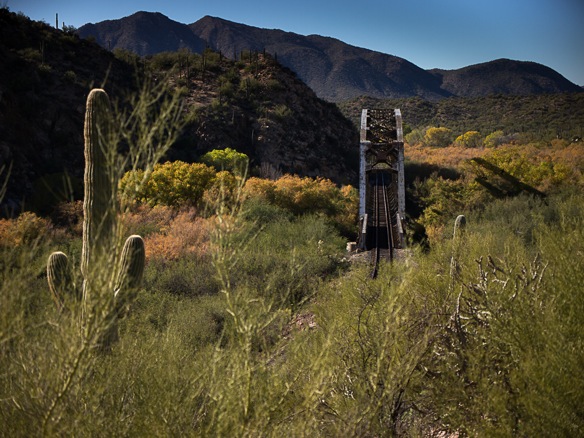 Our many-month ramble across counties and countries and continents always had an end.  A seasonal end to our travel is an inevitability from the start, much like the few months that we spend working each year will eventually end with the beginning of another round of travel.  By now, we’re both back in Alaska, working towards our next trip, next summer.

After a few days in Tucson— before and after the marathon– we point towards Phoenix to prepare for our flight north to Alaska.  With a few days between here and there, we take the advice of Scott Morris and connect a premier section of the AZT near the GIla River en route to Phoenix.  The route prescribed should take only a few days–connecting us to our flight in time– but features some of the best that Arizona has to offer.  Being so close to Phoenix, this ride makes a perfect getaway during winter months, especially when ridden as a loop, as defined in Scott’s Gila River Ramble route.  However, do your best to avoid a week of rain as Cass, Gary, and Joe found earlier this year.

There has already been some discussion about passing the winter in Tucson next year.  The weather, the trail access, and the Mexican food can’t be beat.  Alternating winters between the Southwest and Alaska– between full-suspension big bikes and fatbikes– would be satisfying.

The ride out of town retraces a familiar stretch of pavement– this is the way we rode into town, and this way I traveled out and back to watch Lael run her marathon.  I’m becoming quite familiar with Oracle Road. 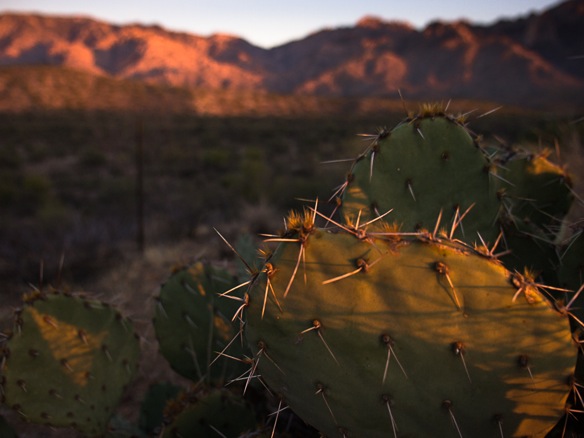 About 35 miles from the center of Tucson, we connect with the Willow Springs Rd near the town of Oracle.

A brief section of singletrack breaks up what we expect to be a full day of dirt road riding towards Kelvin.  This piece of trail is part of the 24 Hours in the Old Pueblo course. 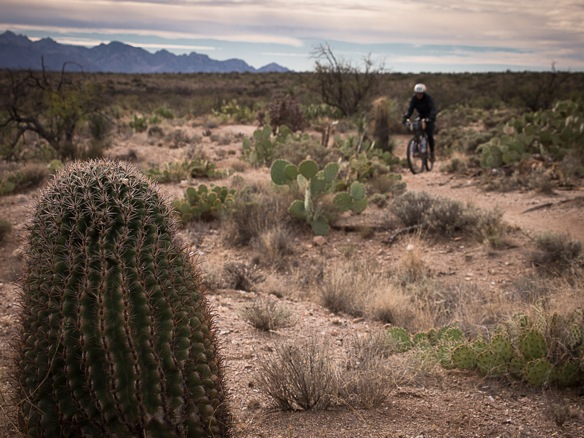 A cool, cloudy day in southern Arizona surprises us, as we bundle up in down jackets for much of the day.  Rural signage keeps our interest. 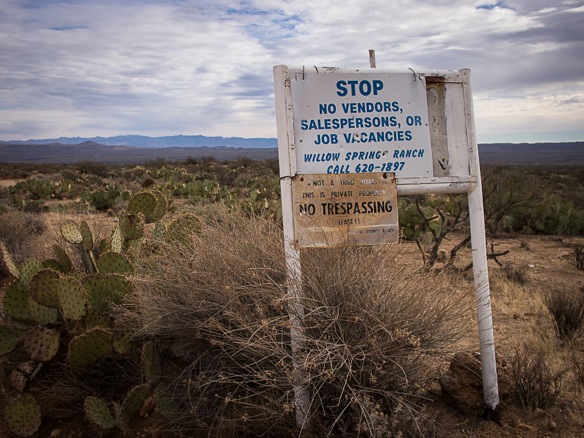 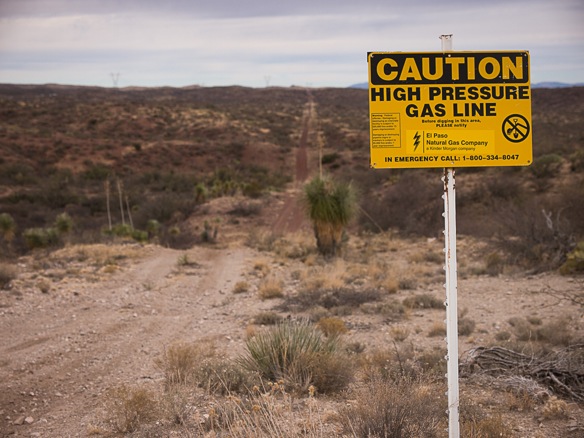 While we disobey a few warnings to shortcut a large private tract.

Eventually, we find the sign we are looking for.  The trail begins as a scenic ‘green-circle’ section of trail.  Tailwinds help to move us along.

The entire region is characterized by decomposed granite, resulting in the granular ‘kitty litter’ soil common in the southwest.  The smaller knobs on the 29×3.0″ Knards don’t bite as well as the taller knobs on Lael’s On-One tires.  With a more aggressive tire like the upcoming Surly Dirt Wizard, 29+ could be the perfect rigid touring platform.  The experience reminds me of riding the Surly Endomorph tire on my Pugsley for the first half of the winter season in 2011-2012.  I was grateful that it got me around town, but once I tasted the traction of the Nate tire, I couldn’t go back. 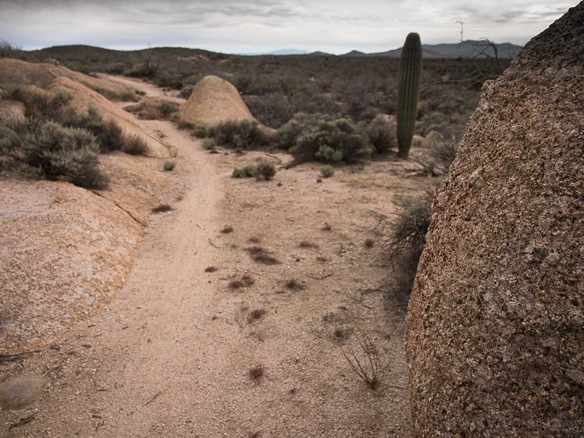 The trail alternates between singletrack and derelict doubletrack, as the sun begins to fall.  A few jeep tracks are seen in the distance, but otherwise, there’s nothing out here.  A few ranch houses likely inhabit distant drainages.  Cattle munch of woody desert vegetation.

Looking back towards Oracle, and Tucson beyond.

Looking forward towards the town of Kelvin, and the Gila River.  This is wide open Arizona. 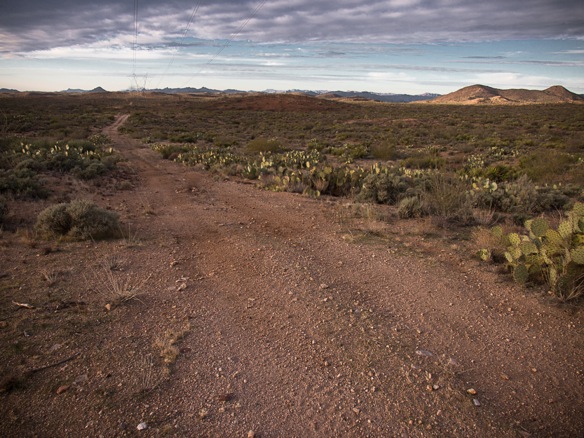 he setting sun filters through cholla cactus.  One of the last Arizonan sunsets of the season. 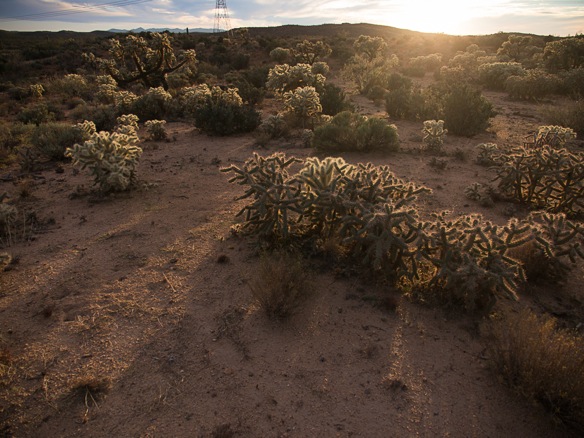 Reaching towards the Gila River near Kelvin on the Ripsey Segment of the AZT, the trail descends several thousand feet, before rising again to elevation, then finally descending to the river..

Descend in the evening.

Ascend in the morning.  Life on the AZT is easy, even if it challenges our legs.

The quality of trail being built for the AZT is some of the best anywhere, and is designed for bicycles as much as hikers and horse.  The trail surface is most often broad and durable, carving switchbacks up relatively shallow grades.  Not that it is always easy…

At the top, the trail follows a ridge, before diving down towards the Gila River.

There are very few water sources out here.  Near the trailhead in Kelvin, a water cache is offered to passing thru-hikers.  Local residents– one variety of a diverse breed of trail angels— refill 1 gallon jugs to keep up with the trickle of demand for water out here.  We found a spigot at the ADOT yard in Kelvin to fill our bottles and bladders.  The Gila RIver flows all year and is another reliable source in the area.  Otherwise, local intel is essential, as is a large water bladder.  The GPS marks a few springs or tanks in the area, but these aren’t always reliable sources.  More frequently, as I’ve learned, they are only possible water sources.  The search for water is another reason that GPS is an invaluable resource in Arizona. 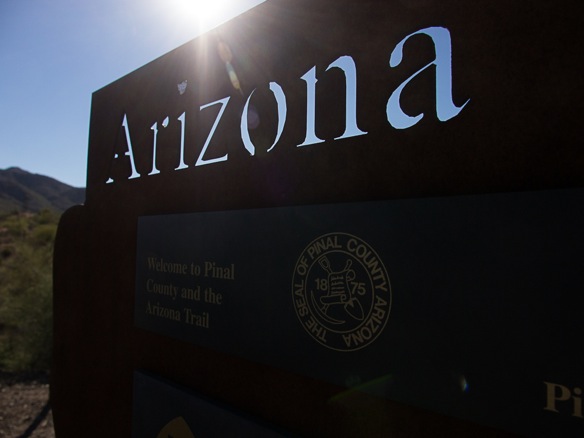 With the capacity to carry 14 liters of water– at maximum capacity between the two of us– we can make it through a day and a half this time of year.  Much more water would be necessary spring through fall.  It is December 11th already, and clear skies relieve us of wearing our down jackets on this day.

Leaving Kelvin, the AZT rambles up and down along the banks of the Gila River for nearly ten miles.  This section of trail is the keystone to Scott Morris’ Gila River Ramble route. 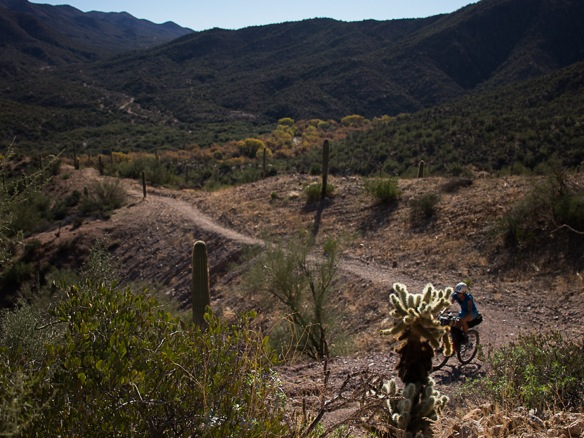 Long sightlines in the desert allow the eye to follow trail up, and down.

Of course, I went for a swim.

The trail meanders in the lowlands along the river, green from recent rains.  Lael particularly liked this section as it varied greatly from the Sonoran deserts capes we’ve enjoyed for the past few weeks.

As the sun begins to fall again, we climb away from the river for the last time.  The map shows several thousand feet of climbing ahead.  We hope to bite a chunk out of the climb before dark. 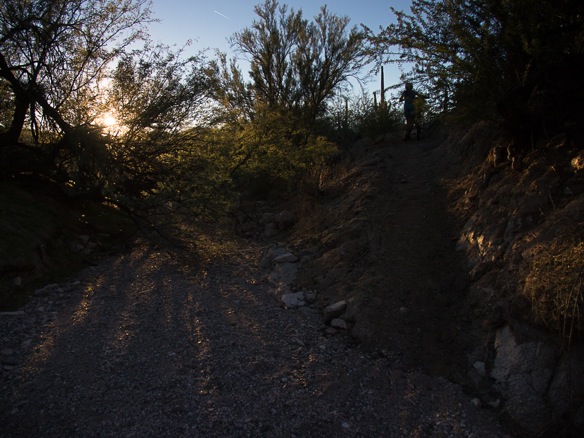 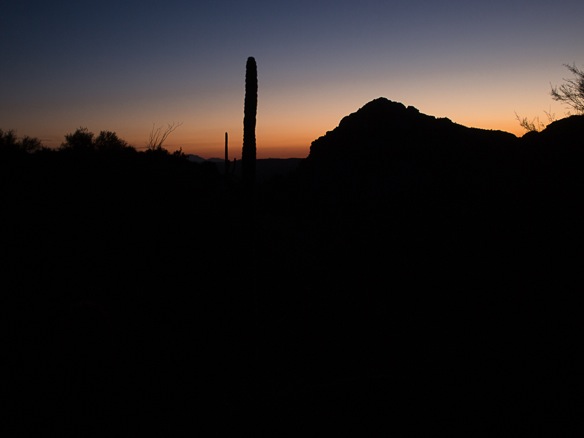 Our final night is warm and clear.  We make a fire of dry ocotillo twigs to warm quesadillas.  Our food supplies are low, but our bodies are now efficient machines after a full summer of riding.  We are happy with smaller meals than we required at the beginning of the summer.  The first few weeks of touring are usually marked by ravenous appetites.  After weeks and months on the road, our bodies decide on moderate meals, yet they are capable of more and more.  Lael is thinking about racing fatbikes this winter.

Awake to Arizona for one last time. 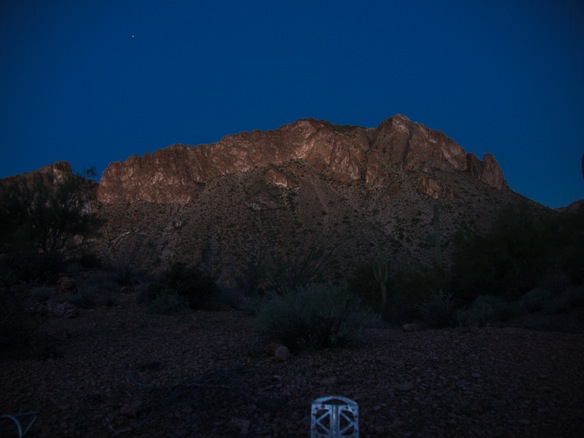 Awake to the AZT for the last time, until next year. 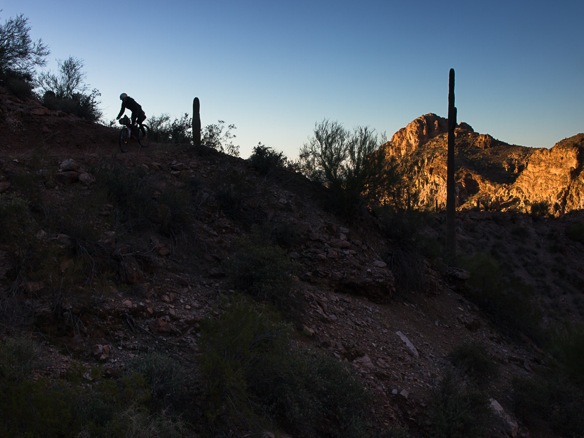 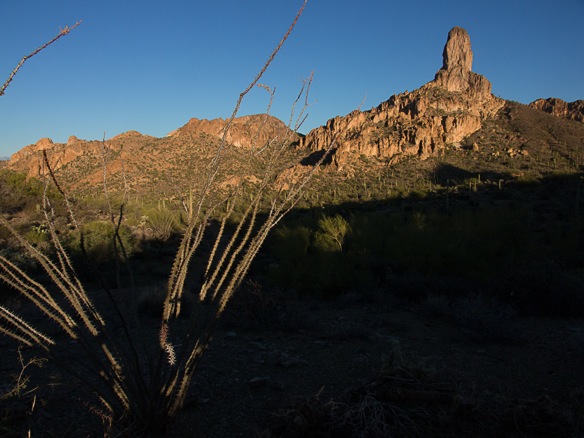 The sun breaks the cool morning, as jackets come off. 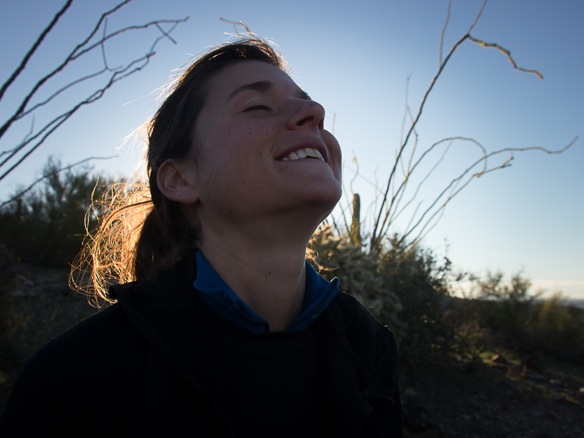 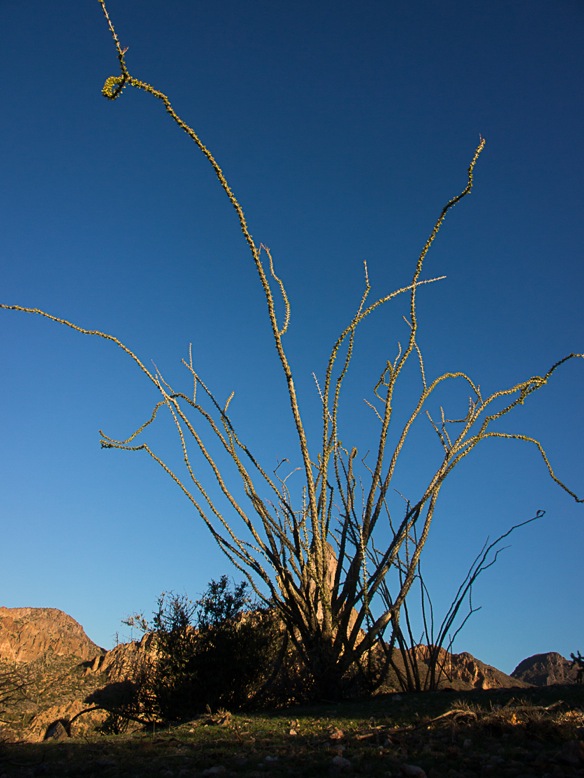 We continue ascending.  The river sits at 1600ft; we climb up towards 4000ft.  See if you can follow the trail, etched out of the mountainsides.  The first major push: 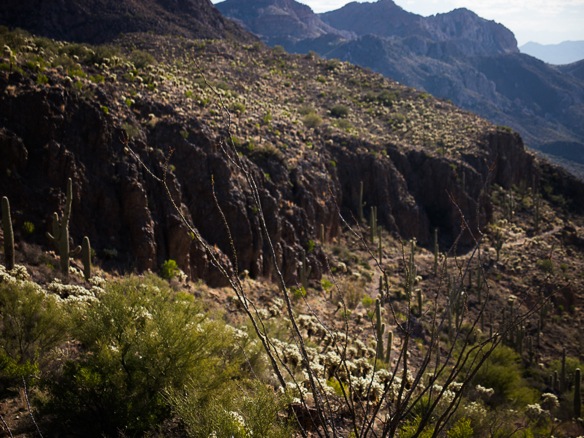 Over the top, another world presents itself.  The trail continues to cut the mountainside, all around this basin, stabilizing around 3600ft before climbing over the top. 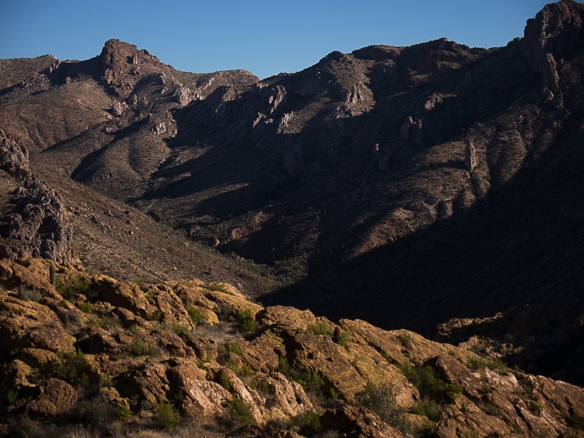 Finally, the trail turns down.  Running tight on time, we hope to connect with a dirt road– the Telegraph Canyon Road– into the town of Superior.  There, we will pick up some food and hit the pavement into Phoenix.

Down, down, down– this is a great piece of trail.  Although, descending the trail back down to the Gila would be even better.  The ascent from the river stands as one of the most incredible climbs of the summer.  Fare well Arizona, we’ll be back.

Back on doubletrack, we are quickly on our way to town.

Quickly, kind of, as the road traverses the stream bed more than a few times, and climbs and descends several stair-step sections. 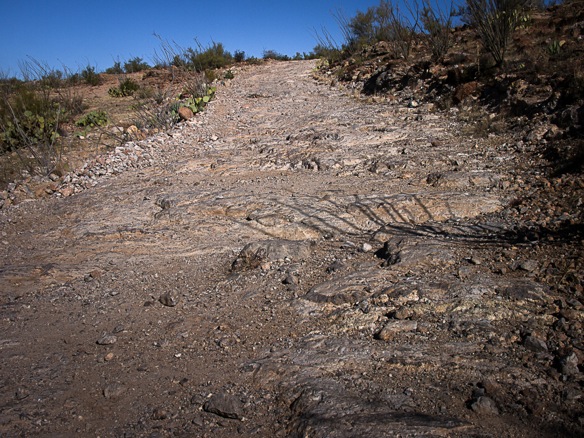 Finally, within view of Superior, a classic Arizonan mining town. 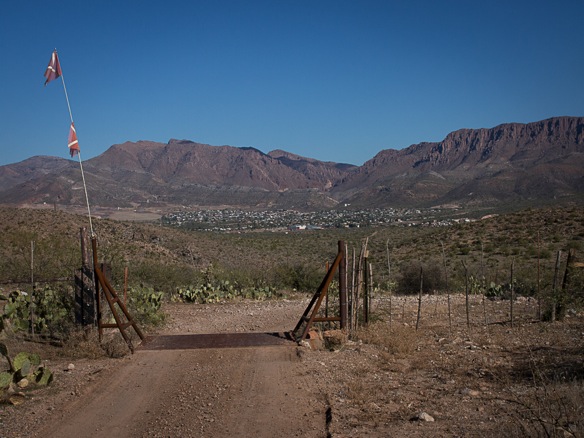 Superior is home to mountains and mining, and meth.  In some towns, it is hard to ignore. 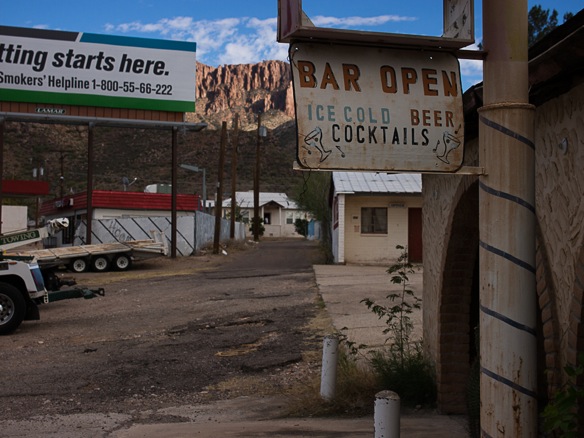 These 29×3.0″ Surly Knard tires are wearing thin, but a new pair await in Anchorage to replace them.  With a set of Rabbit Hole rims and fresh tires, I am hoping that the ECR will shuttle me around the city of Anchorage for part the winter until I save enough money to buy a fatbike.  While I think that 29+ would be enough to get around on the roads most days, to access the snowy multi-use paths and singletrack trails, a proper fatbike will be necessary.  A real fatbike will also make commuting safer and easier on many days, even on roads.  Anchorage is a messy city in winter.

These tires have been set-up tubeless to Stan’s Flow EX rims for three weeks without issue, although the rim profile is not nearly wide enough for my taste.

As you may expect, Knards also roll nicely on pavement.  But at $90 per tire, even for the less-expensive 27tpi version, designing a long-distance tour around this tire isn’t ideal.  Replace it with a normal 29″ tire if needed?  Sure, it is possible, but the BB will be much lower, as on a traditional road touring bike.  In this configuration, the ECR is not quite a mountain bike anymore.  More tire options between 29×2.5-3.0″  would be nice.

The ride into Phoenix is much more pleasant than our last experience riding out of town, back in 2009.  The city is nearly 60 miles across, but with some patience, a route composed almost entirely of canal paths and bike lanes is possible.

Bike boxes, fresh from the dumpster, are hauled to our temporary home over the shoulder.  A few extra gear straps make a functional over-the-shoulder sling.

Thanks to Steve for the limo ride to the airport. 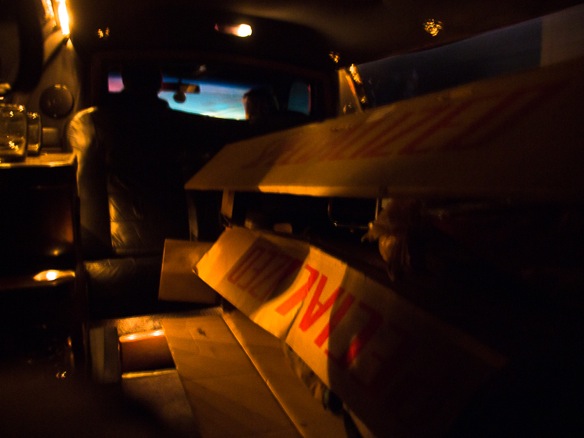 Off to Alaska for the winter!

That’s it!– thanks for coming along this summer. 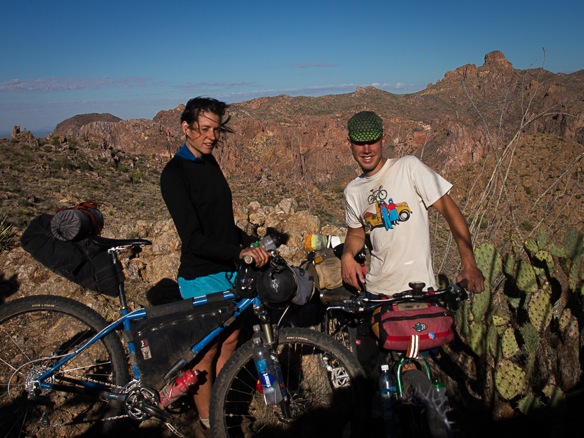 15 thoughts on “Farewell Arizona: Tucson to Phoenix, via AZT”