We are back in Alaska.  Lael grew up in Anchorage, and I’ve lived here twice before, seasonally.  The first time, we lived in a late 60’s camping trailer on a bluff above the Nenana River while working at a restaurant outside Denali National Park in the summer of 2009.  In 2011, we returned to spend the winter in Anchorage, discovering winter riding, fatbikes, and snowy singletrack in a season of record snowfall.  Last winter we lived in Albuquerque, NM.  We are back in Anchorage for the season.

Much is the same as before: it is cold and snowy, the roads are rutted and icy, vehicles are monstrous and drivers are aggressive, days are short, the city is huge (second largest by area in the US) and getting outdoors is essential to enjoying the long, dark season.  However, much has changed: fatbikes are more prevalent around town, and better equipment is available; more trails have been built or packed into the snow; studded tires are available in every wheel and tire size for bicycles, including fatbikes; and, we are much better prepared for the winter riding season.  Note how the latter are all solutions to the former– for us, fatbikes are the reason that life is possible in Anchorage in the winter.

The last time I was near sea level was in Ukraine along the Black Sea.  Before that, Holland.

Just beyond sunrise and the Garmin already reads, “Sunset in 5hr 13min”.  Our arrival in Anchorage is well timed, as the season is already gaining daylight towards June.

Winter riding is much of the reason we have come this far north for the winter.  The urban-based riding in Anchorage is some of the best anywhere.  Links lead to old posts from winter 2011-12, our first winter in Anchorage. 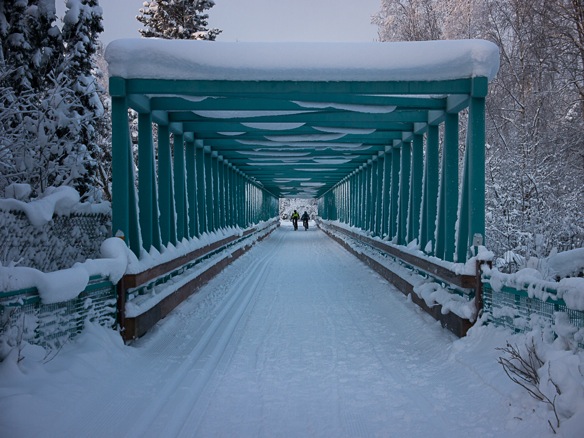 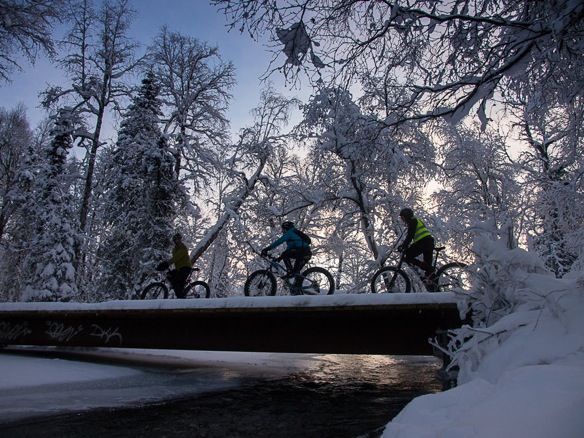 Wildlife.  Moose are a common sight around town.

In the winter, nobody misses the bugs or the bears, or soggy trails. 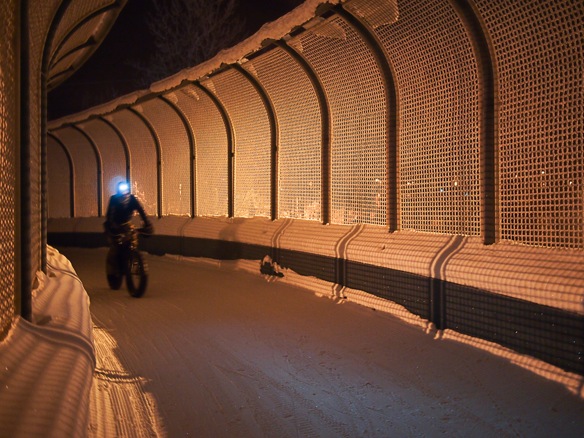 Busy boulevards— lots of those too.

Ice beards.  Everyone grows a beard in the winter in Alaska– everyone.

New trail facilities, bypassing a previously necessary hike-a-bike along a frozen stream under the highway.

And much more to explore.

Fatbikes are loads of fun, and Anchorage is the center of the fatbike universe.  While many people are excited simply to see a fatbike in person at their local shop, in Anchorage, it is possible to view and test ride fatbikes from every manufacturer.  Already, I’ve spotted bikes from Salsa, Surly, 9zero7, Fatback, Specialized, Trek, Kona, 616, and Borealis.  Lael– lucky as always– has already been treated to a brand new Salsa Mukluk 3 in her first week in town.  I am still shopping for a bike.  Many base model bikes are now specced with aggressive Surly Nate tires and practical 2x drivetrains.  This year, the Salsa Mukluk borrows from last year’s Beargrease, with an all aluminum frame and fork to save weight.  With Lael’s bike, I plan to drill the rims, set-up the tires tubeless, mount a wide carbon handlebar, and source a framebag and pogies.  She plans to ride it a lot. 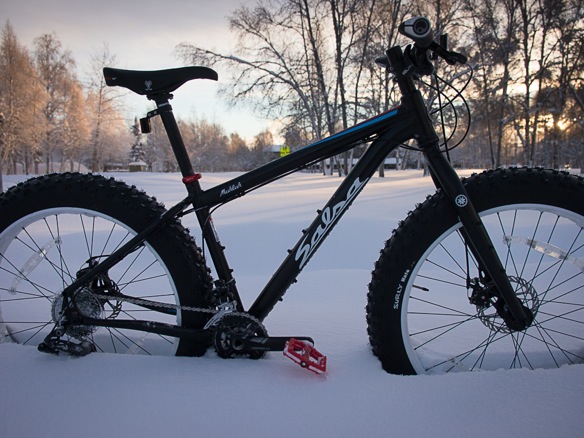 Fatbiking has a long history in Alaska.  This 90’s-era Specialized downhill tire was notable for a large-volume casing, aggressive tread pattern, and lightweight construction.  Likely due to a lightweight casing, it was not a reliable tire under extreme DH condition, and quickly disappeared from the market.  Only a few prescient winter riders snagged them before they disappeared.  Mounted on 80+mm Remolino rims– designed by Ray Molina in southern New Mexico– these Big Hits were serious equipment back in the day.

I’ve had a taste of a similar tire size recently, riding 29×3.0″ Knards in the snow.  I am waiting on some hubs to build a set of wheels with 50mm wide Surly Rabbit Hole rims.  While I still intend to buy a proper fatbike, the ECR will remain as the ‘fast bike’ for when trail conditions are firm and well-frozen.  Hopefully, one of the bikes will receive some studs.

Singlewall rims with cutouts are standard equipment these days, while heavier doublewall designs like the Large Marge rims we pushed around two years ago are almost nonexistent from the scene.  These gold anodized rims were made in a limited run.  Naturally, Lael has her eye on some gold Rolling Darryl rims.  These are 65mm Marge Lite rims, weighing in at less than 700g.

More likely, we’ll simply have her unholy 82mm Rolling Darryls drilled at Paramount Cycles here in Anchorage.  The process is said to shave over 200g per wheel, and allows for a custom rim strip.  A tubeless set-up should shave some more weight from the wheels, at little cost.  A lighter weight downhill tube (26×2.3-3.0″) is another simple trick to shed some grams from the wheels, but is not advisable in thorn country.  Tubeless is still a foreign concept to many cyclists in Alaska, as in other parts of the country. 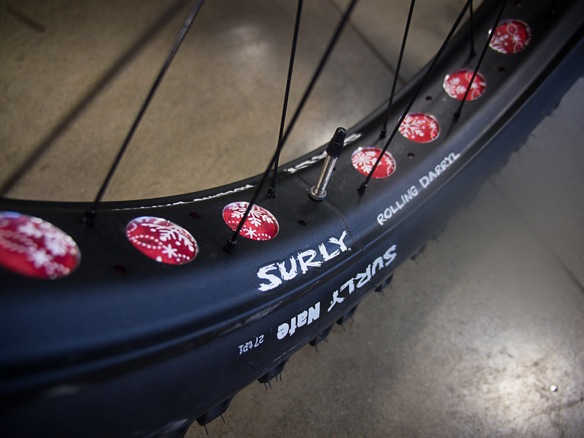 Gigantic rims and tires are all the rage in the fatbike market this year.  Several manufacturers have moved to a 190mm rear dropout spacing (compared to 170mm or offset 135mm), which makes room for the widest rims and tires on the market, and retains compatibility with a full MTB drivetrain.  There are some great new tires in limited distribution from Fatback, Vee Rubber, and Specialized, but most of the talk is about Surly’s Bud and Lou tires, the pair of shred-your-face-off front and rear specific tires, measuring almost 5 inches.  Mounted to 100mm Surly Clownshoe rims, this is the best you can do when the snow piles up.  Note, this 9zero7 frame is also sculpted out of carbon fiber, something that has become more common and highly coveted in in the last few months.  Recent releases from Salsa, 9zero7, and Borealis have excited riders, although Fatback will be bringing their expertise to a carbon frame in the next few months. 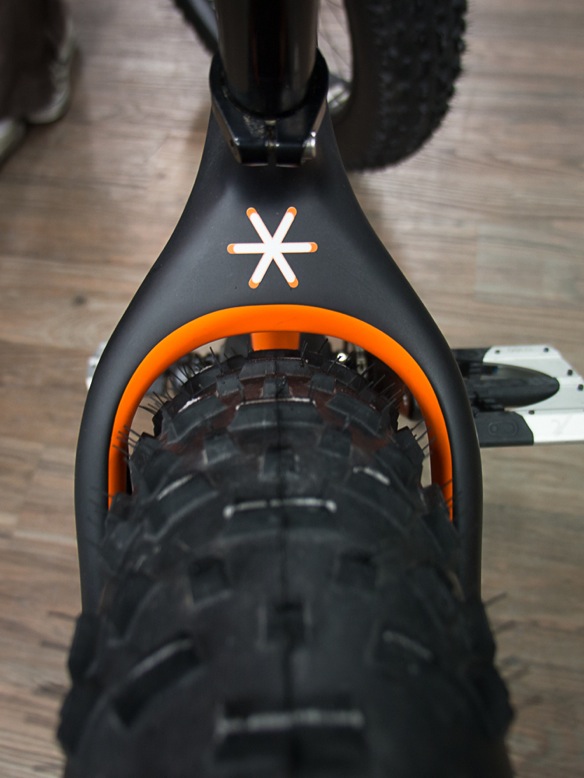 In the 90’s, a custom bike like this John Evingson frame from Anchorage, AK was the best equipment available for riding on snow.  Surely, it is a beautiful frame, and a highly capable bike. 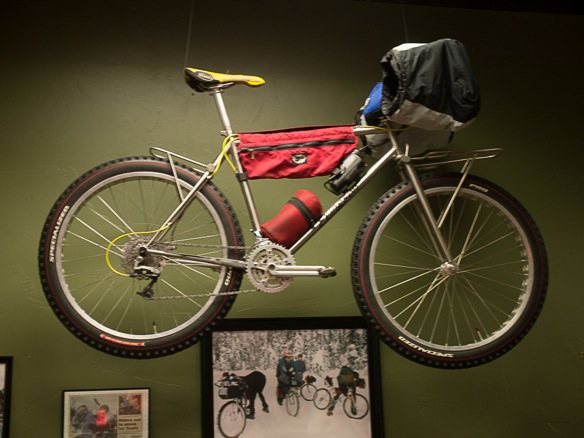 But the current off-the-shelf offerings show several decades of development.  The last eight years– since the introduction of the Surly Pugsley– have been particularly fruitful for fatbiking equipment.

Since test-riding this carbon fiber Salsa Beargrease, I am tempted by the qualities of a rigid carbon bike, especially when riding bootpacked and bumpy trails.  The Beargrease is a lively machine.

However, if I had my pick of bikes (cost, no object), I might go home with a Borealis frame.  I haven’t ridden one yet, but the shape of the tubes and the silhouette of the frame from afar indicates a sense of style, even beyond the function it exudes.  On such bikes, SRAM XX1 1 x 11speed drivetrains are common. 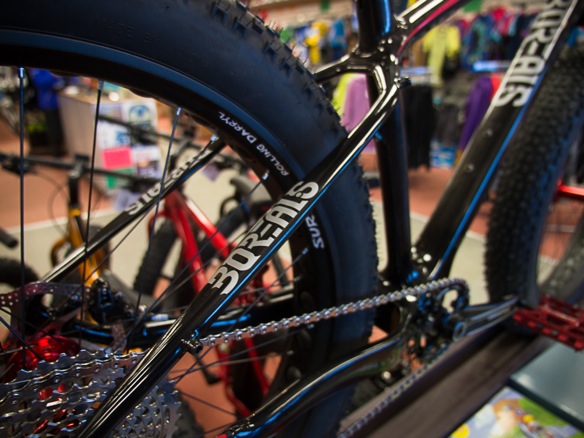 Part-time residency also gives us time to enjoy the holidays and spend time with family.  As we work our way towards next summer, our plans will reveal themselves.  Until then, we’ll just enjoy the luxuries of living in town and having a soup pot larger than 1L to prepare meals.

I first spotted the new 2014 Adventure Cycling calendar this week.  Lael took this photo of me outside Del Norte, CO on the Great Divide Route, aboard my Surly Pugsley.  I take it as a sign that we should be out riding by June. 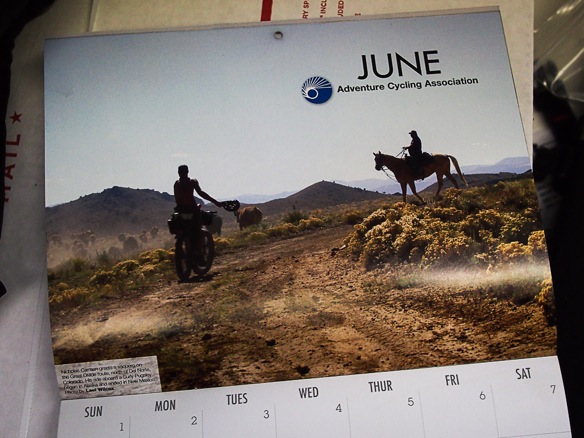 I’ve spent a few days on a borrowed Mukluk 2, which shaves a few pounds off the Muk 3, featuring an upgraded parts spec and lighter wheels.  I enjoyed the bike, but the experience of riding the Beargrease has me wondering if it might be worth it for the winter.  I’ve hardly ever had a new bike in the last decade.  A $3500 canon fiber fatbike is a big leap, but why not?

Realistically, I am most likely to buy a base model bike as soon as it snows more than a fees inches again, to avoid fishtailing around town on skinny tires.  Almost a week since the last snowfall, the Surly ECR has been a practical machine, capable of some snowy trail riding at extreme low pressures.  Fresh Knard tires hook up well with frozen hardpacked snow, and once I build wheels with wider Rabbit Hole rims, they should be even better.  But, a fatbike is necessary to ride absolutely every day, and to explore the trails. 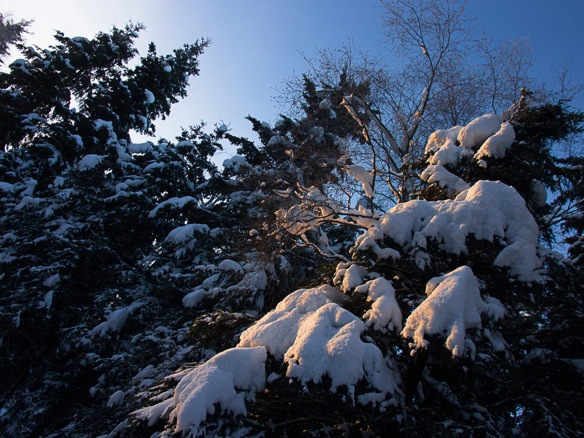 22 thoughts on “Back in Alaska”