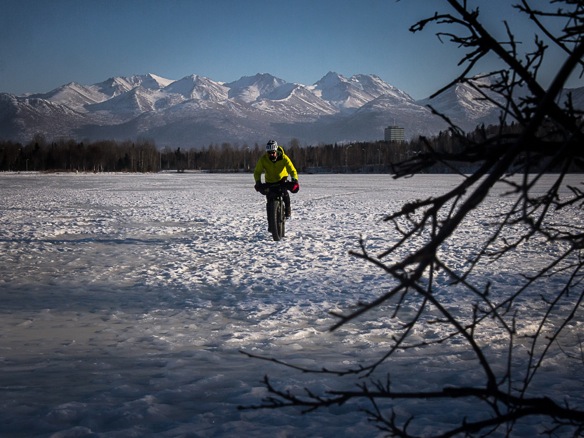 Above: Clint rides across glare ice and crust on Westchester Lagoon, in the center of Anchorage, AK.  Spring conditions have arrived early this year, making studded tires a necessary tool.

The Winter City 30/50K Urban Randonée celebrates winter cycling in the city of Anchorage.  Organized by the Alaska Randonneurs as a fundraiser for the Bicycle Commuters of Anchorage, it provides an opportunity to ride with others, on routes which usually compose morning commutes or late night rides.  On this morning, well over 100 riders meet at the Trek Bicycle Store to encircle the city on a mix of multi-use greenway trails, signed urban bike routes, and secondary streets.  Given the unusual weather we’ve experienced this past month, the route was largely covered by ice, with alternating sections of dry pavement and hardpacked snow trails.  There is not an ideal bike for this route, although studs and a large-volume tire provide security and comfort.  Fatbikes, especially those with studs, were the bike of choice for many.

I enjoyed the chance to ride with a lot of new people, including some acquaintances from The Bicycle Shop, and even a few co-workers with whom I have never ridden.

We begin in a large group, and slowly disperse into several smaller groups.  We ride south on C Street, onto the Campbell Creek Trail to cross under the Old Seward Highway. 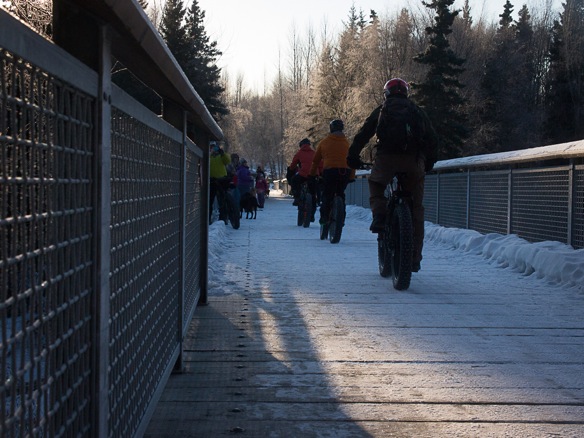 We choose a shortcut across Taku Lake, passing several groups of ice fishermen. 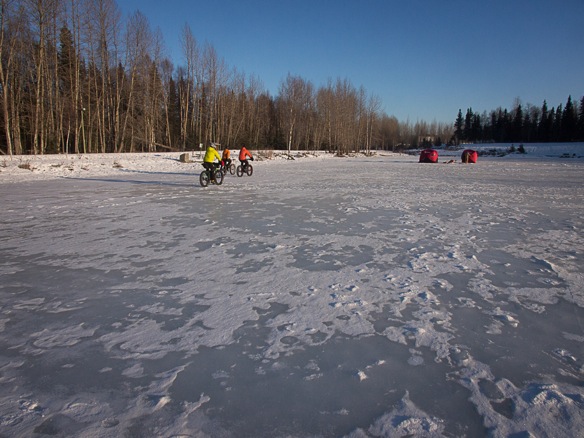 A small bottleneck at the first control is the last that we’ll see.  We won’t make the next control before the prescribed cut-off time.  Along the way, we detour onto some urban singletrack; the other half of our group assists another rider with a derailleur malfunction. 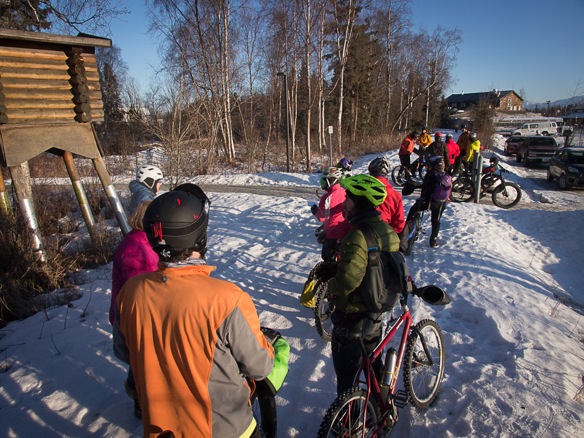 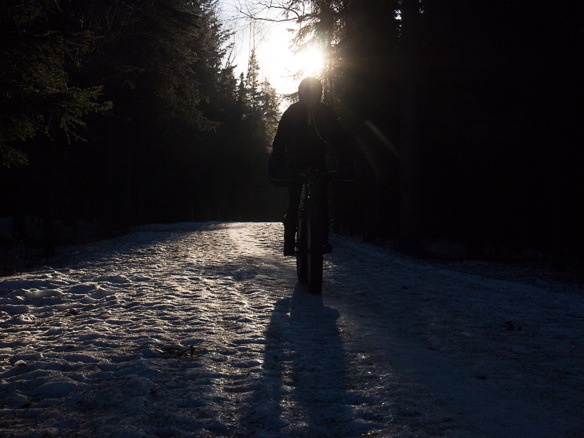 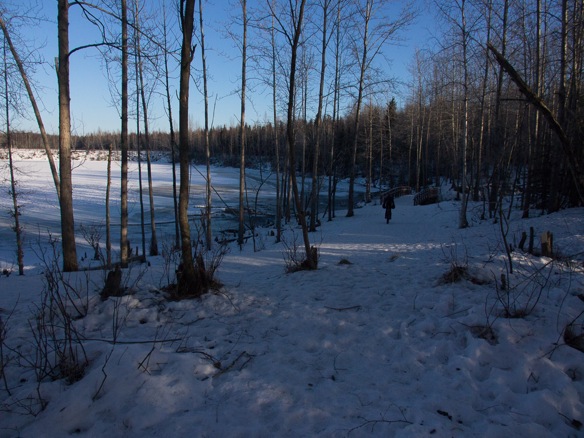 A slice of the Blue Booty trail near APU breaks up the ride. 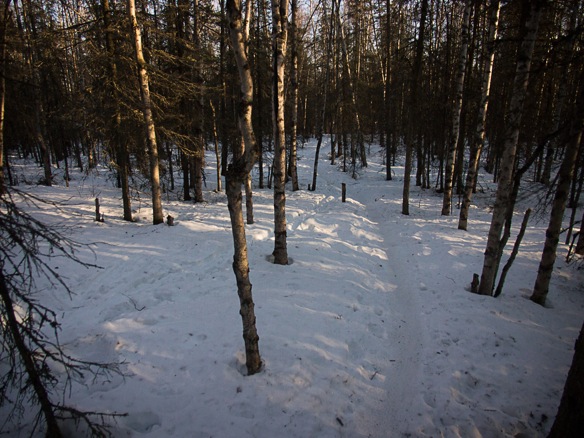 Back onto multi-use trail and over Northern Lights Blvd. to Russian Jack Park. 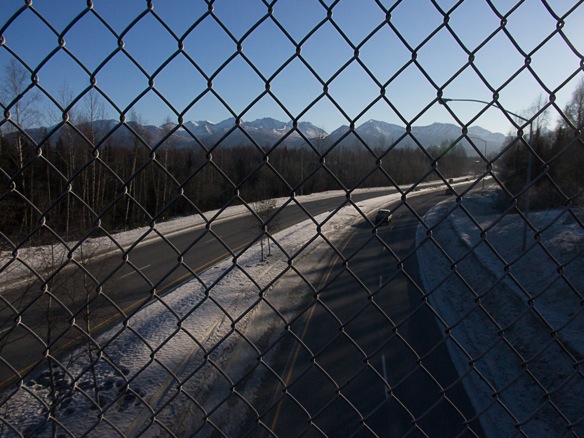 The next control warrants a few moments indoors to warm fingers and toes.  Back to her old touring habits, Lael indulges in a cup of gas station coffee at the Holiday station.  Does this count as coffeeneuring? 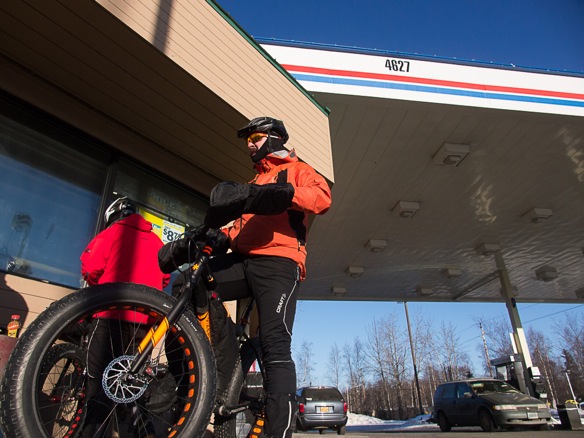 Onto a network of icy streets in the Mountain View neighborhood. 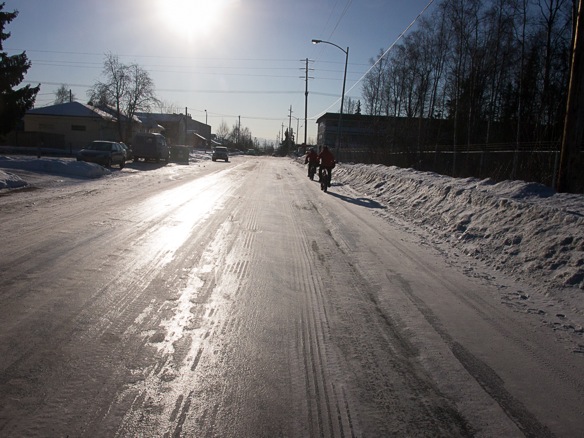 To the Ship Creek Trail.  This newer multi-use trail is a crucial link to a traffic-free loop around town, an especially popular summer ride. 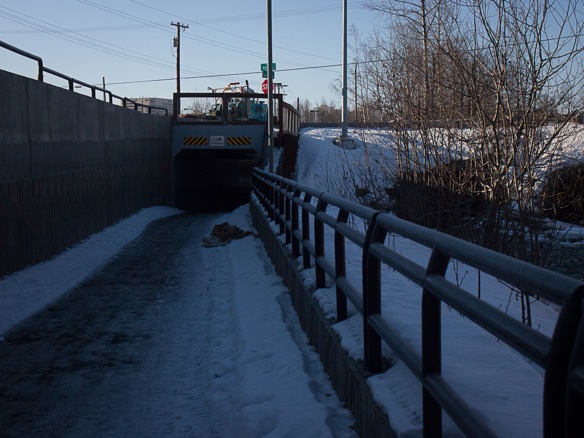 The Ship Creek Trail includes features which indicate a big budget, but will be enjoyed for years to come. 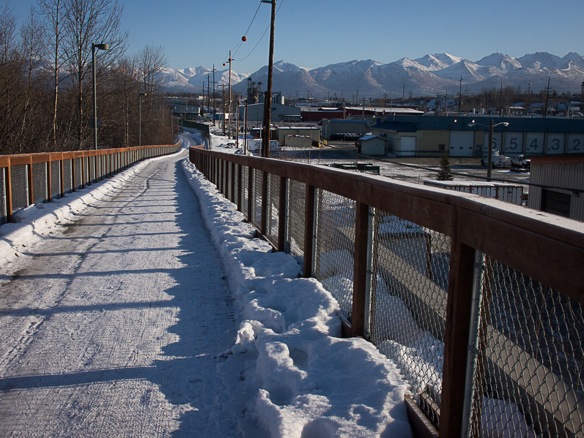 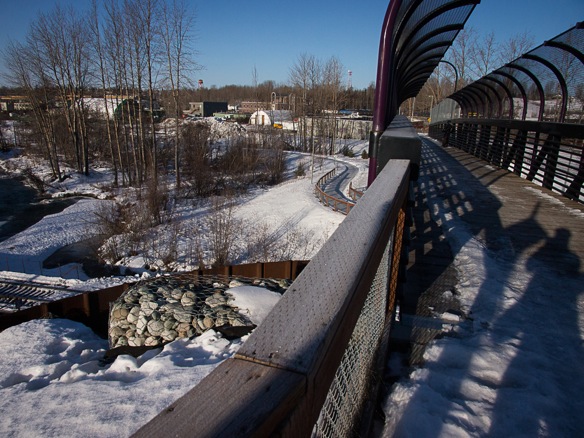 Downstream from Mountain View, Ship Creek connects to the railroad yards, the port, and downtown Anchorage.  The mouth of the creek is open to salmon fishing. 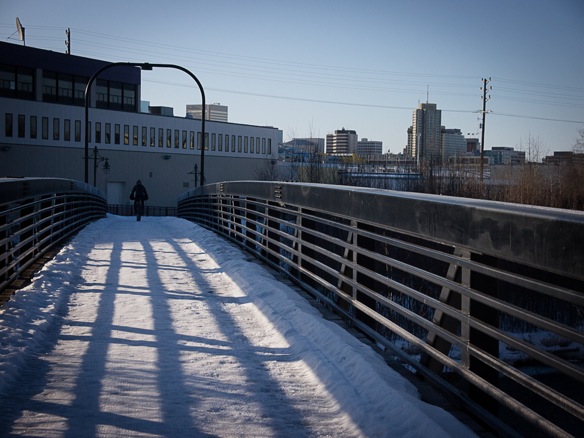 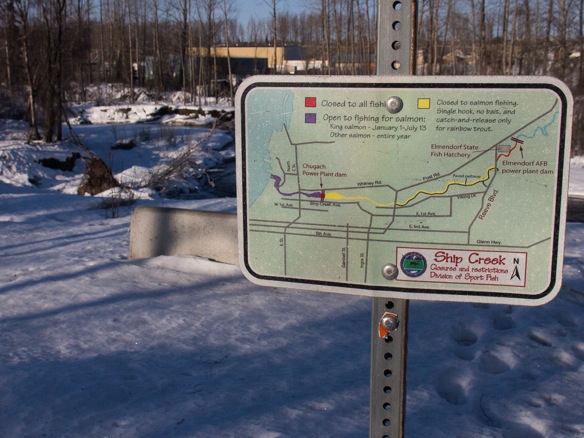 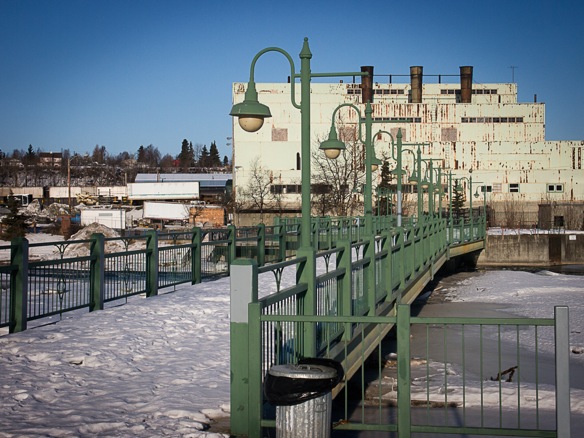 While Anchorage does maintain an active port, it is not the largest in the state, measured by value of the product handled.  That honor goes to Valdez, which deals almost exclusively in the export of Alaskan oil, transported from the North Slope by the Trans-Alaskan Pipeline System.  However, Anchorage receives most of the commercial goods that enter into the state, typically arriving from Tacoma, WA. 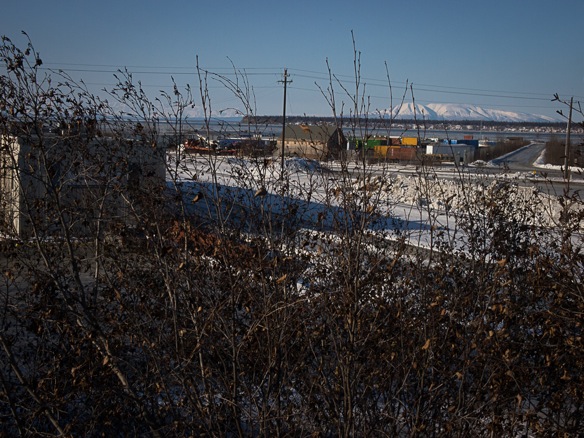 Up the hill, leaving the railroad, the port, and Ship Creek behind. 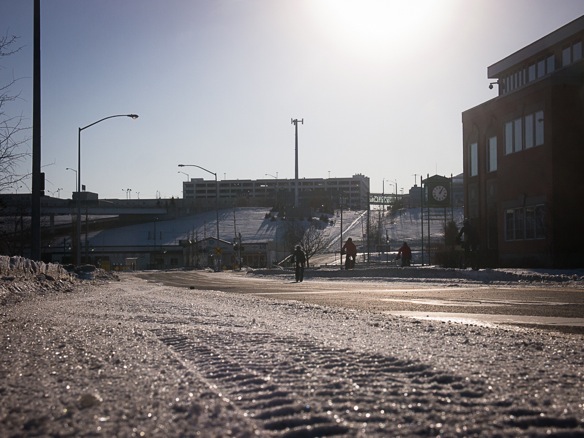 To 4th Street, the heart of downtown, unusually void of snow and ice in early February. 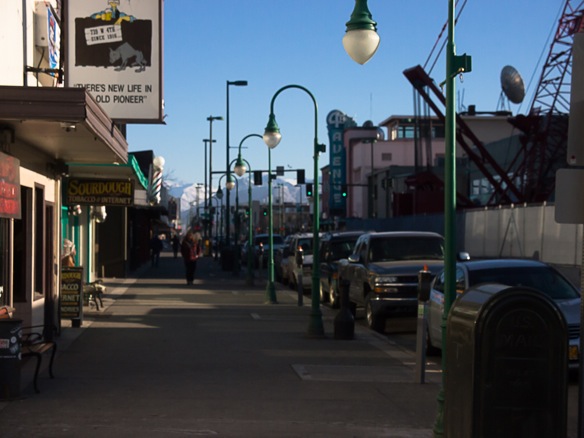 For a few moments, studs and fat tires are unnecessary.  For a moment, we’re just a group of over-dressed, over-equipped weekend riders. 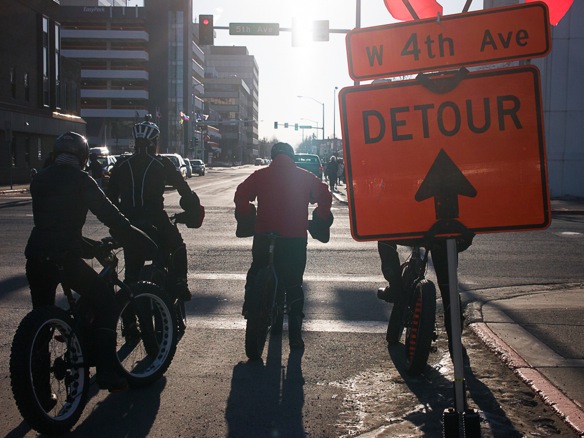 Crossing the Delaney Park Strip, we point our tires towards the Fire Island Bakery. 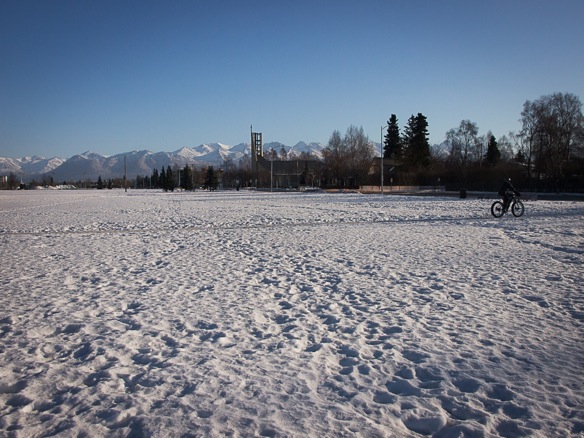 Fresh baked bread and pastries draw us in.  I purchase a cup of coffee, a peanut butter cookie sandwich, and a baguette for dinner. 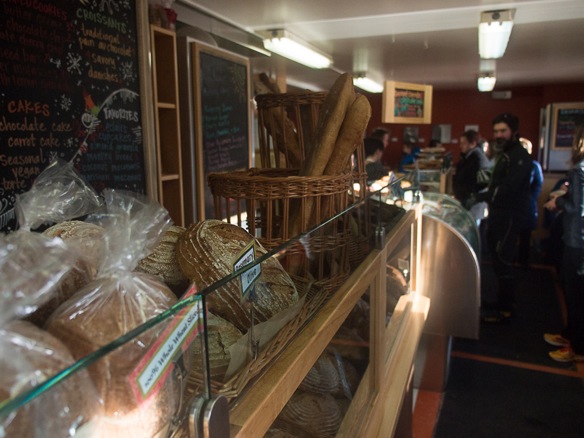 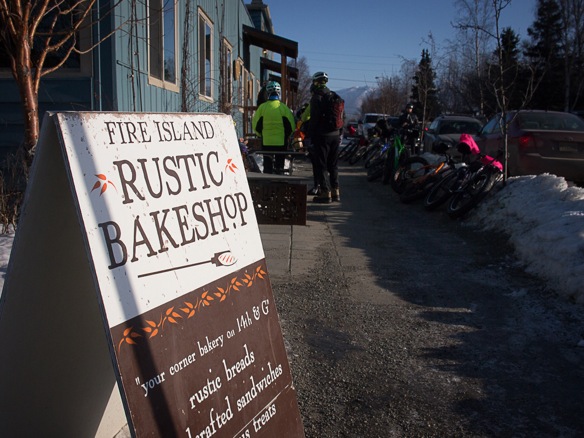 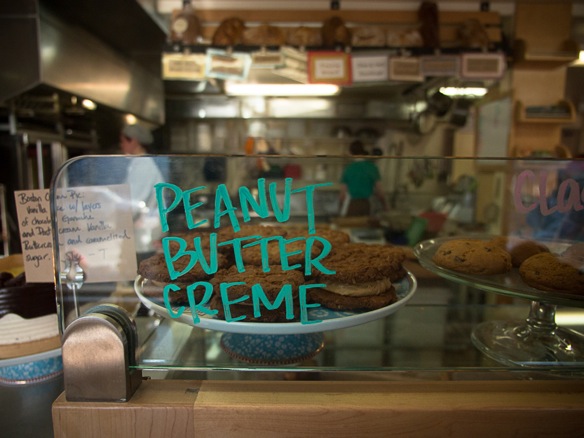 The baguette fits nicely in my new Porcelain Rocket framebag, which is custom sized and color-matched to my 19″ red Mukluk. 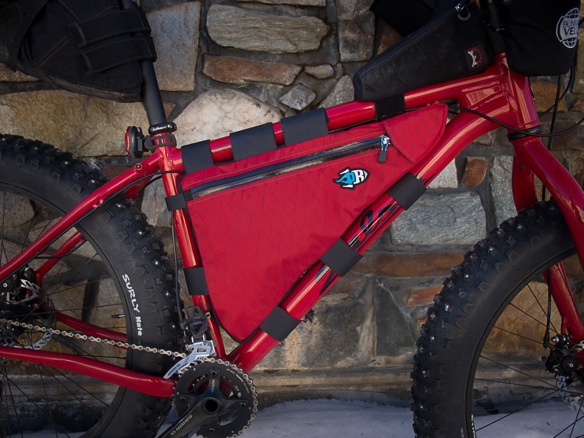 Back on the road, Lael parts from the group and rides to work.  Three of us remain to complete the final 20K of the route.  Tailwinds and late afternoon sun help us along.  After all the distractions of the day, we finally settle on a more brisk riding pace.  I’d like to say it is because we’re motivated, but in fact, the next control on our list is the King Street Brewery.  We breeze past several less interesting controls en route to the taproom (Taco King, NOAA, another gas station; we were already hours past the cut-off time). 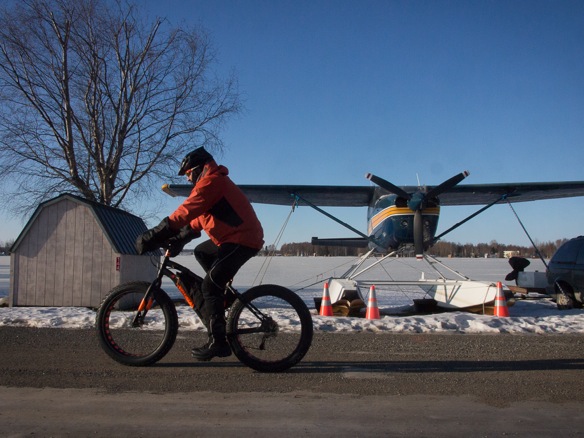 We ride across Taku Lake a second time towards the brewery.  This is my first time visiting the King Street Brewery.  Now I know it is only a block off the trail– good news! 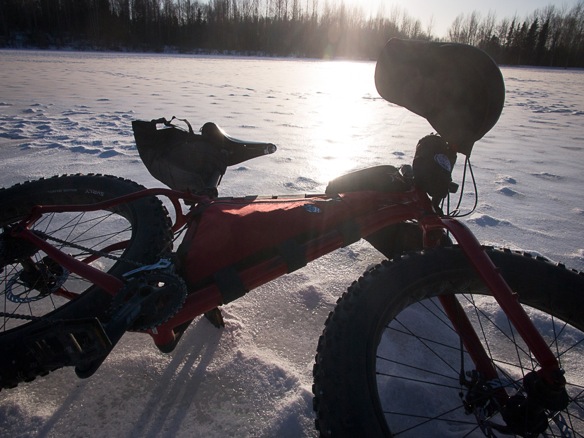 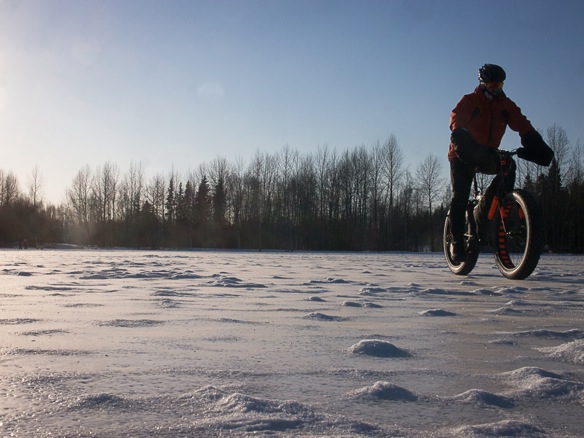 Only a few miles from the end of the ride, Clint, Paul and I settle in for a fresh pint.  A pink Fatback and a white Pugsley are resting outside when we arrive.  Clint is riding a carbon 9zero7 Whiteout frame with Dillinger tires set-up tubeless on Rolling Darryl rims, while Paul is on an aluminum 9zero7 frame with 100mm wide Clownshoe rims.  Paul uses a variety of tires based upon conditions, including some 5″ Bud and Lou tires when the snow piles up.  Both 9zero7 frames easily swallow 100mm rims and 5″ tires thanks to a 190mm rear spacing. 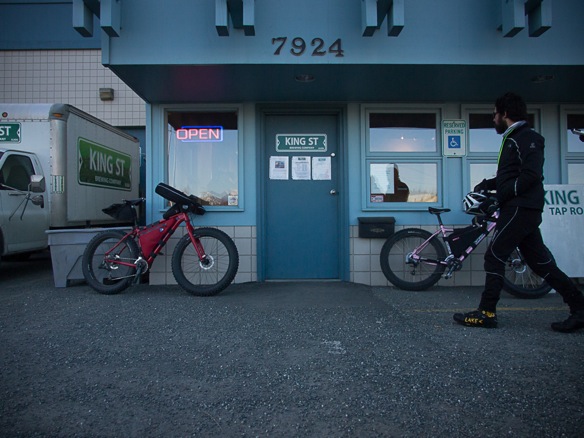 Back to the Trek Store, to finish the day.  Thanks to Clint and Paul for a great day of riding!  Let’s do it again sometime.  Next time we can make our own route, connecting greenway trails and singletrack from bakery to brewery and beyond. 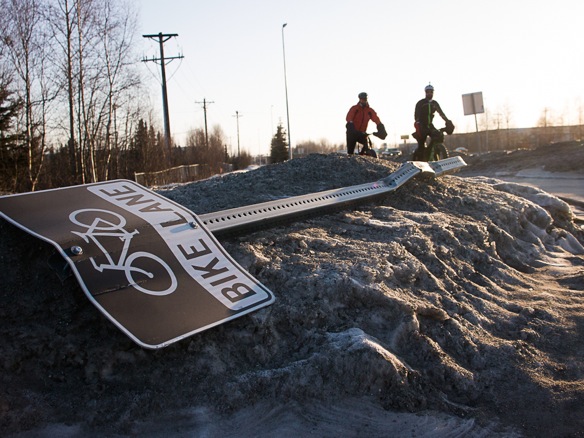