Seeking an hour of sun on my day off work, Lael and I finally put down our coffee cups and start pedaling around noon.  She has been dealing with a creaky ankle, so the plan is to make a mellow circuit of the local multi-use trails.

However, the Fur Rondy dog mushing races have taken over the main trails.  These are preliminary exhibition races to the Iditarod, which starts later this week.

Instead, we cut through neighborhoods to a local singletrack trail called Blue Booty, named for a blue dog booty (like a sock), that had once been found on the trail.  This is the most prominent trail through APU (Alaska Pacific University), at the heart of a new network of trails taking shape.  Most of those trails seems to be natural, without grooming, signage, or mapping.  It only takes a little traffic to make top-notch winter trails.  More fatbikes equal more trails. 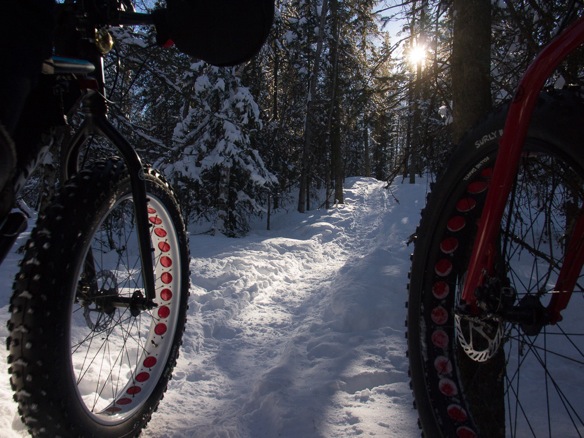 Soon, Lael peels off towards work.  I intend a few more pedal strokes before returning home.

I continue, dodging sections of trail closed for the races.  After two weeks without much riding, and altogether too much time indoors and in front of a computer, I can’t seem to get close enough to the sun.  If I keep going south, by the end of the day I’ll have consumed more sun than I’ve seen in months.  If lucky, I might even get a sunburn.

Turning off the Tour of Anchorage trail onto Blue Dot, a favorite amongst cyclist in town.  This is a popular connection for group rides. 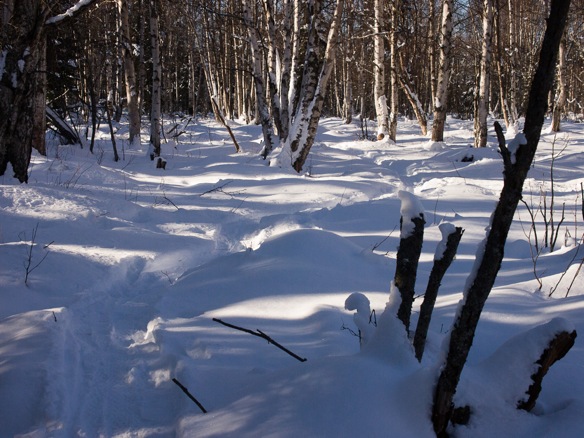 A friend joins for a spin.  Nate rides a pink Fatback.  We first met several years ago when I listed a Nate tire on Craigslist.  Eventually, I borrowed some Schwalbe tires for my Pugsley, in trade for Maxxis Holy Rollers.  I returned the Schwalbes after riding them down to Montana, and eventually, he returned the Nate to me in New Mexico.  We are like tire pen-pals.

Nate is working to create a few extra trails in the Campbell Tract from the Lore Road trailhead.  After a snowfall, he first packs the trail with snowshoes.  Next, walkers and riders begin to work it in.  Eventually, it is rideable (mostly).  In winter, traffic is paramount to the existence of trail. 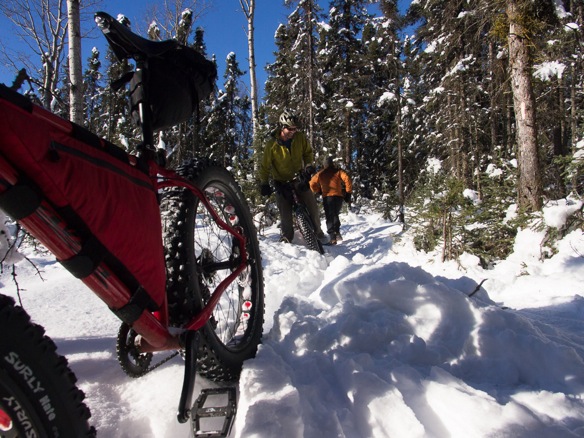 We encounter a prototye Fatback Corvus frame and fork, with tubeless carbon Fatback rims.  I heft the bike; the internal scales says ‘superlight’.  Top finishers in the 350 mile Iditarod Trail Invitational (ITI) to McGrath were both riding Fatback bikes this past weekend.  Kevin Breitenbach and Tim Bernston both crushed Jay Petervary’s record from last year, due in part to excellent trail conditions with little snow.  They arrived in McGrath in a little over 2 days. 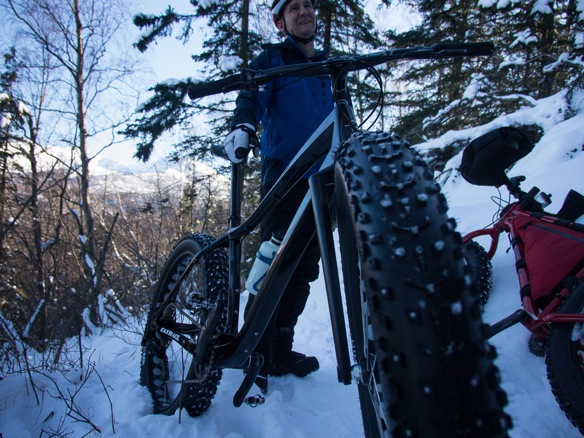 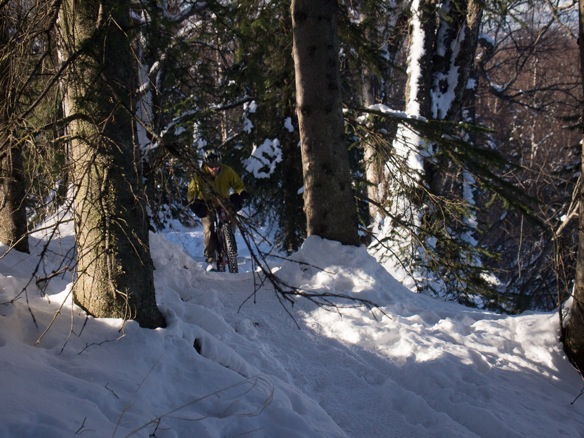 With so many familiar faces on the trail, we hardly find time to ride.  Nick has recently made his 9zero7 fatbike tubeless, opting for the reliable split-tube method, mating 120tpi Dillingers to Rolling Darryls.  The split tube method is easy and reliable, and works with almost any combination of rim and tire. 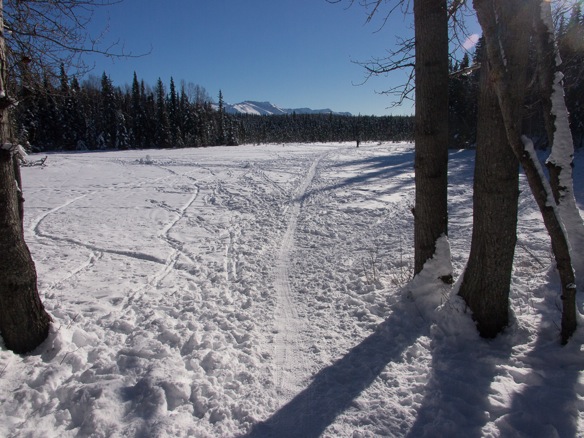 First, onto Elmore Road, which dead-ends onto a powerline trail, before resuming again further south.

Down to a grocery store for lunch. 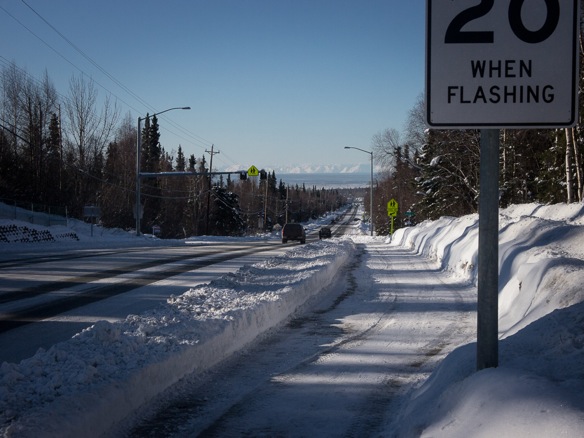 Including a stop at two local bike shops, the grocery store, and an electronics store for a lens filter, I connect the east side of town with Kincaid Park, in the west.  Immediately, I shoot for unfamiliar trails along the waterfront. 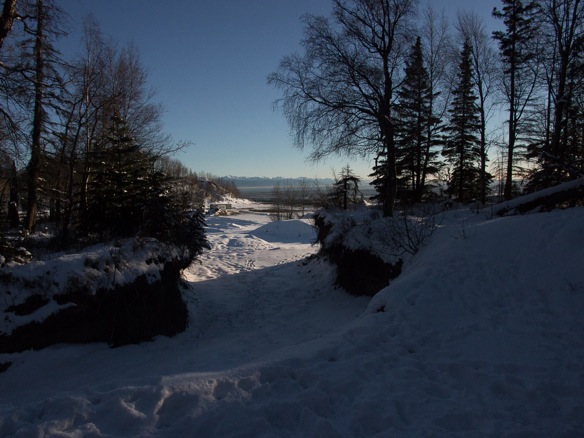 A crusty, sandy trail leads up the hill.  With a little grit, it is rideable. 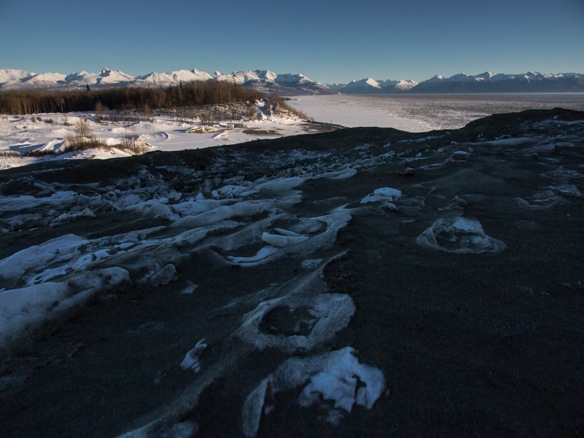 It leads up and around, to the bluff. 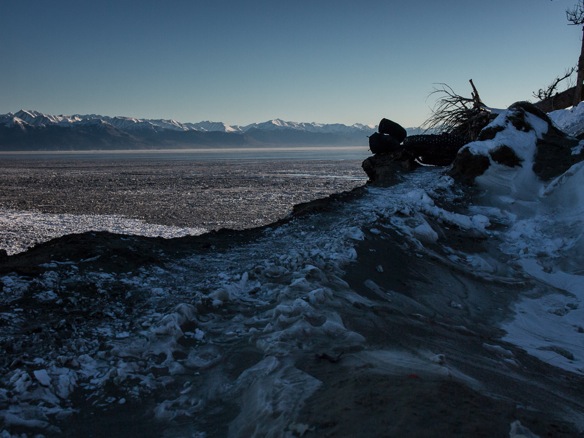 This southwestern exposure gets plenty of springtime sun, and is reported to be the first dry trail in town. 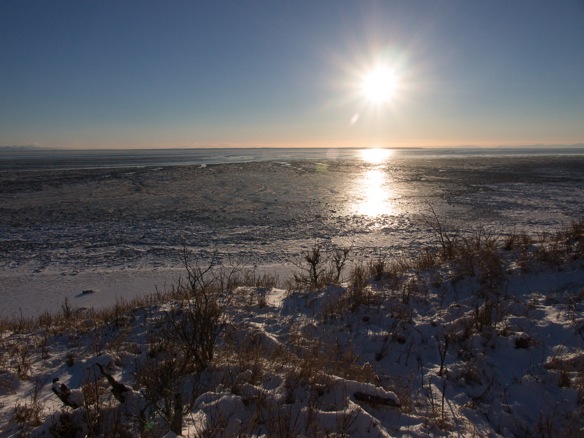 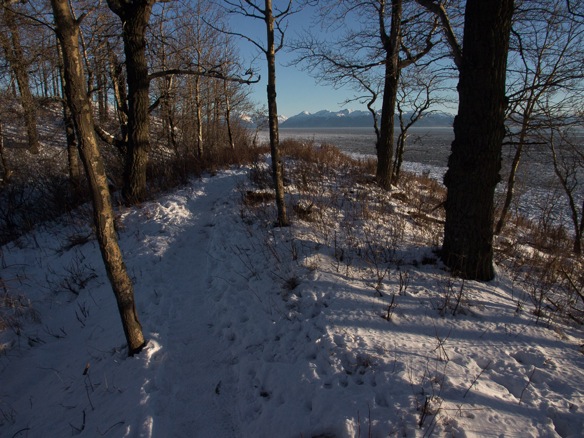 In winter, it seems to get little tire traffic.  Mostly boot tracks are present. 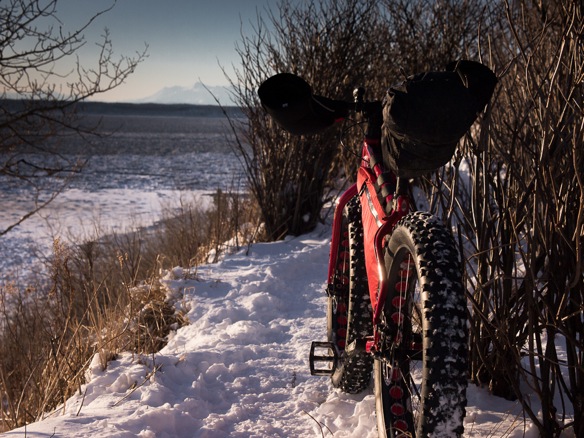 The trail is a little sketchy at times, including some crusty off-camber trail.  However, most if it is rideable and much more like mountain biking that most of the playful groomed trails we usually enjoy.  The distinction, I think, is the presence of natural obstacles, and a few unridable features.  On this day, Surly Nate tires are great.  I am loving the new tubeless set-up as well.  The bike is much more fun.

Connecting back to more established trail, a chill settles.  Sunlight slowly wanes.  Near the first of March, we gain nearly six minutes of light per day.  Days have just grown longer than 10 hours, a welcomed feature.  March is always a great month. 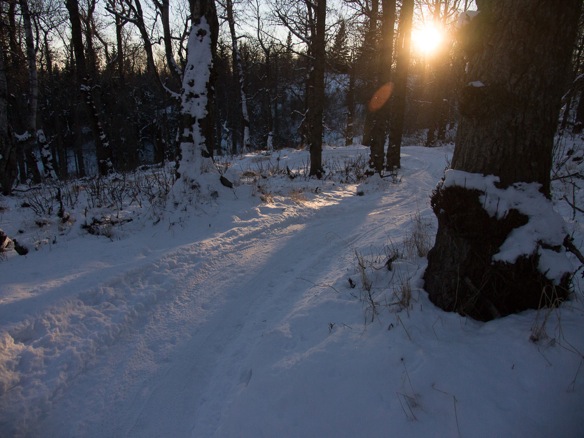 I make several loops of some area trails, as I know I won’t likely have the chance to return during the week.  Conditions are perfect.  The front tire washes a few times while descending Middle Earth.

I wait several minutes before I am able to gently suggest this moose off the trail. 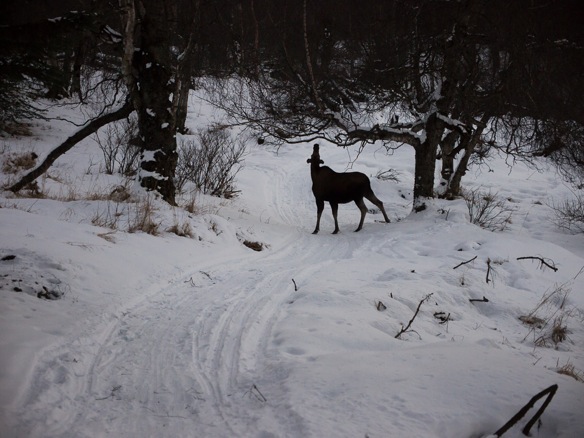 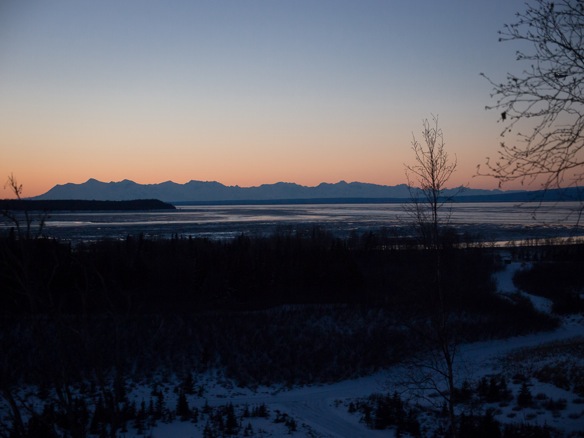 One half of the sky is night. 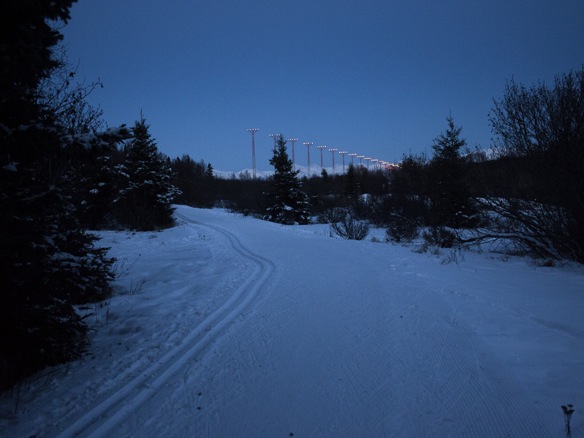 The other half holds dearly onto day.

Finally, I arrive home eight hours after leaving.  Waiting on the front stoop is a box from Velocity USA, containing two high-polish Velocity Dually 29 rims.  We’ll talk about that later.