Whatever time is left before leaving, will always be filled.  Our bikes were ready to ride weeks ago, but in the interim, I’ve built them to be even better.  New tires, chain, cassette, chainrings, bottom bracket, shifters, brake levers, and brake pads are all fit to Lael’s bike; water storage and lighting systems designed and built for mine; and thanks to Eric Parsons of Revelate Designs, I’m in possession of the most advanced off-pavement touring bags ever.  We’ll talk more on this later, but the framebag doesn’t have a zipper and the seatpack fits a Macbook Air.  After 6 years, I’m finally rack-free and zipper-lite.  Zipper-free 2015?

Whatever space is made on the bicycle, will always be filled.  As such, I’m running a slimmer kit than usual, but with a longer travel fork and wider rims and tires.  Lael has done the same.  By design, the bikes can do more without any weight gain.  It should be a fun summer of riding.

Our final weeks in Anchorage are busy, as expected.  I’ve worked six to seven days week since late March, finding limited time to ride, write, and plan.  Lael and I finished work a week before our scheduled departure.  We spent three days hurriedly preparing for “The Art of Bikepacking” event.  I printed photos and we prepared a program and food for over 100 people.  Eric talked about sewing and biking.  Dan talked about taking pictures, and biking, and carrying olive oil around Spain in panniers (a good use for panniers, if any).  I read from my article in Bicycle Times.  If ever a sign that people enjoyed themselves, the beer was gone before we started talking.  The food was gone by the end of the night.  Good times with great people, talking about bikes.  Thanks to Surly, Velo Orange, Adventure Cycling, Revelate Designs, Midnight Sun Brewery, and Bunyan Velo for providing great prizes.  Thanks to Eric, Dan, Jamin, Lael and all the guys at The Bicycle Shop, Dimond for all the help.

Thereafter, we did everything else that needed to be done before leaving.  On the last day, I’m sifting though giveaway piles and bank receipts and gear bags, trying to make the most of a big mess.  As I put the last staple into our bike boxes outside The Bicycle Shop, Eric rings the final bell, barely completing a game-changing seatpack at 2:39 in the afternoon.  We hitch a ride from Lael’s sister to the airport at 2:45.  We are drinking Warsteiner over the North Pole– en route to Frankfurt– by dinnertime.

In spite of the sprint to the finish, there are some fun memories from our last weeks in town.

On the 4th of July, choosing not to leave town with everyone else, I choose a mellow pedal over Powerline Pass.  The pile of snow at the top of the pass is visible from Midtown Anchorage– from my work, from the grocery store, and the bank, and all the way home on my commute.  I wanted to ride over the pass before leaving town. 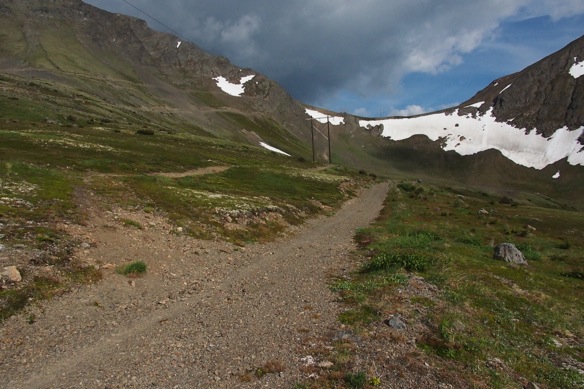 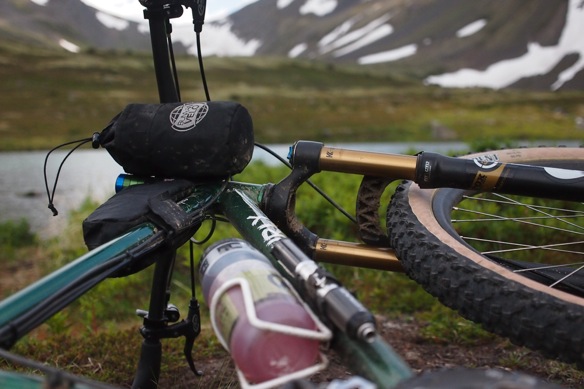 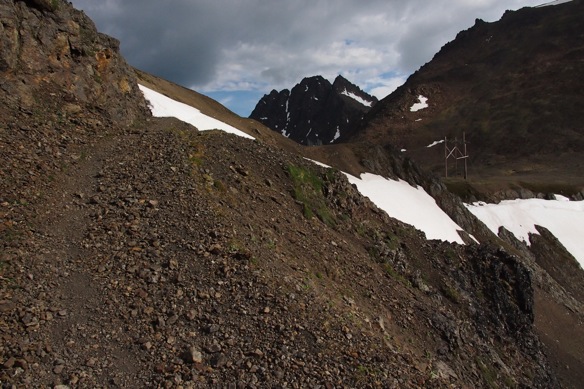 Goats in the distance. 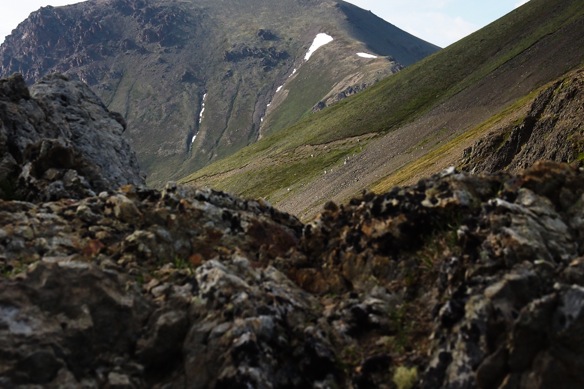 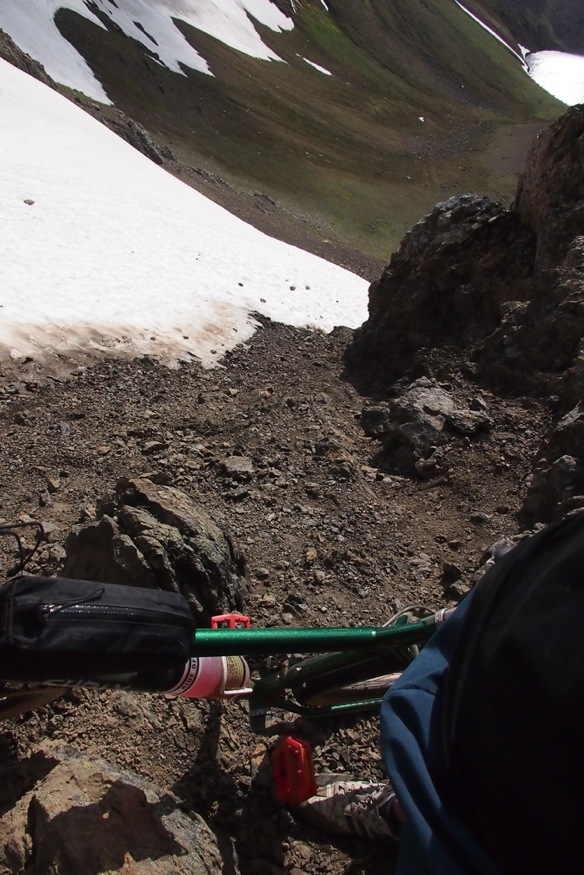 Good thing some real tires are in the mail.  This happened just 50 yards from the top of the pass. 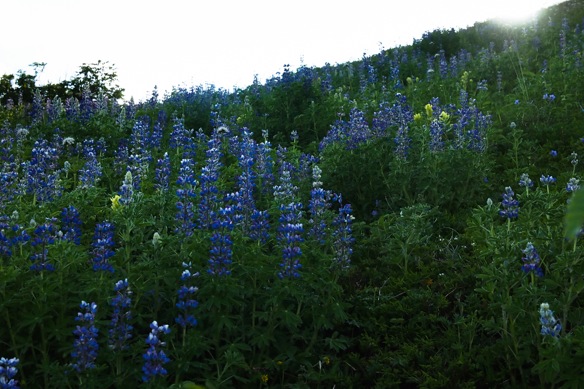 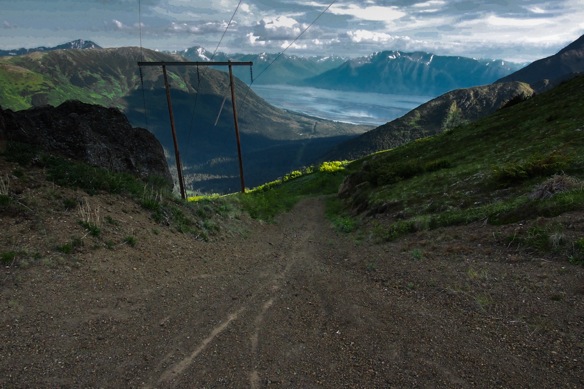 Visiting my friend Harrison at Fatbikes.com and 9zero7, I am shown a prototype of the new 170mm Rohloff hub for fatbikes.  I’ve seen images of the internals, and as you may expect it is a standard 135mm hub with an oversized shell and an internal spacer.  Some people are really excited for this hub.

Following Lael’s big win at the Fireweed 400, we join several hundred at the Bear Tooth Theatre for an awards ceremony.  A film from this years race was especially fun for Lael’s nephew Joshua, who now thinks that every woman in an aero helmet is “Lael!”. 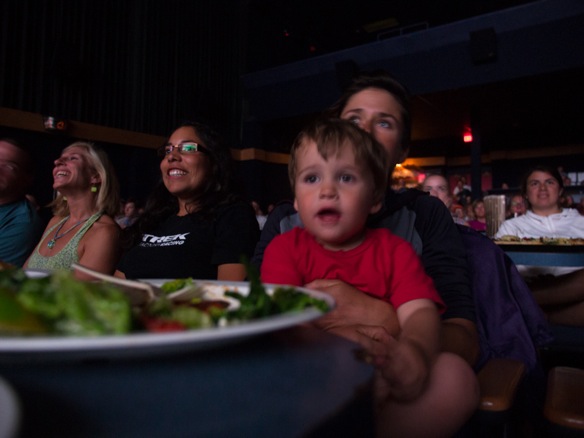 Since Joshua failed to win the raffle for an Ultegra road wheelset at the event (he was disappointed), we went looking for a more suitable pair of wheels for the 2-year old.  A 12″ wheel balance bike is just the ticket.  Letting a little guy pick out his own bike is a challenging request.  At one point he wanted a pink bike with training wheels, and then a 26″ wheel bike.  We finally settle on a red pair of 12″ wheels without pedals.

Learning to hike a bike.

He’s also learning to coast.  Mostly, he walks slowly, barely letting his feet off the ground, although a growing level of familiarity shows that he will soon be coasting on his own.  Some coaxing from dad teaches him what it is all about.

Mostly, ride within your means and stay safe.  The rest is fun and games.  No little kids were injured in the documentation of this event.  He barely even cried.

Jada also receives a new bike, thanks to Aunt Lael.  Her XS 26″ wheel bike elevates her riding to a whole new level.  The other day she rode 9 miles out to Kincaid Park, and 11 miles home. 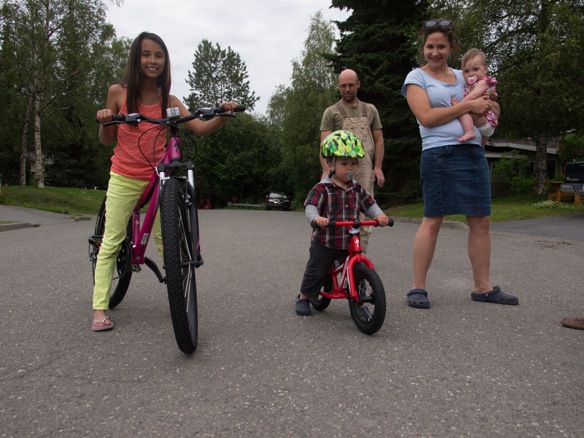 Wheelies!  These kids will be missed.

The Art of Bikepacking event was a huge success.  Afterwards, we dismantled the web of photos.  I’ve since sent over 100 photos all around the world. 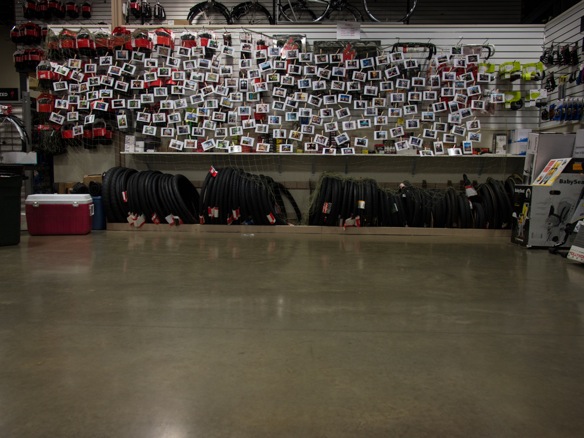 That evening, we also displayed a variety of bikes packed for adventure.  I especially like this father-son overnight pairing.  A couple of small handlebar rolls would round out the system for a summertime romp.  The 20″ wheel Specialized Hotrock is wearing a Jandd Frame Pack in reverse.

Lael’s new favorite, the carbon Specialized Ruby.  This is much like the bike she borrowed for her road rides this spring and summer.

These two Salsa Vaya bikes compare a traditional rack and pannier system to a lightweight bikepacking approach.  Next time we plan an event like this, I hope to pack bikes with actual camping gear and allow test rides.

Thanks to everyone that participated.  It was especially impressive to see so many customized bikes and luggage systems outside.  A bike with some trail grit says much more than an unridden bike on a showroom floor. 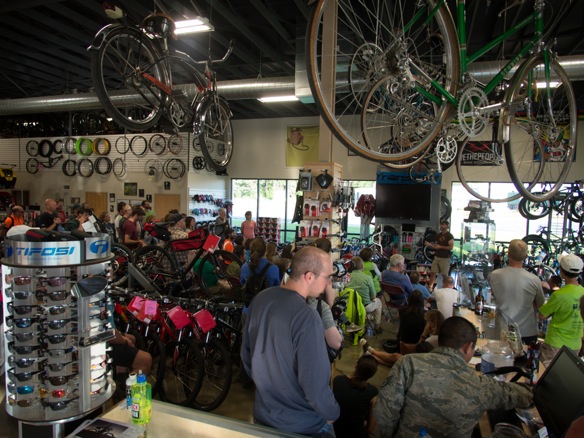 I told everyone to ride to the event.  Dan rode in on his new Salsa Fargo 2.  Once he finishes the final draft of his book on adventure photography, Dan and his Fargo are going on an extended bike trip.

The same weekend, an army of singlespeeders from around the world descend into Anchorage for SSWC.  It’s a wild bunch.  It involves a lot of beer, and very few gears.

This Surly 1×1 is one of my favorites of the weekend.  It features 40mm Spank rims and 2.75″ Surly Dirt Wizard tires.  Simple and durable– 26″ wheels aren’t dead yet. 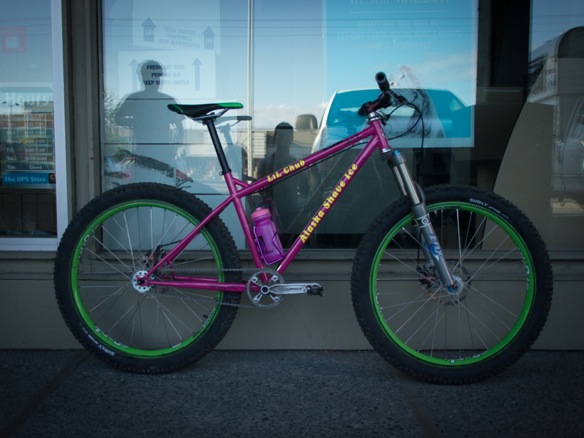 This custom titanium Moonmen frame blends the function of a fatbike with the aesthetic of a BMX bike.  The frame is 100% gorgeous, with features similar to some Black Sheep designs.  No wonder, as Moonmen is a new company in Fort Collins, CO with ten years experience working at Black Sheep.

On Thursday afternoon, we all roll over to the new Revelate Designs shop on Fireweed for some silk-screening, sewing, and of course, beer.  Eric hosted a DIY silk-screening party to show off the new space.  Despite their appearance, the Surly folks are always amazingly kind.

That evening, registration for the event (not to be confused with a race) was held at Speedway Cycles. home of the Fatback.  This custom painted carbon Corvus frame is dressed in prototype Maxxis Chronicle 29×3.0″ tires on Surly Rabbit Hole rims, singlespeed.  Those big yellow letters inspire confidence, and elicit excitement.  Maxxis EXO tires are awesome. 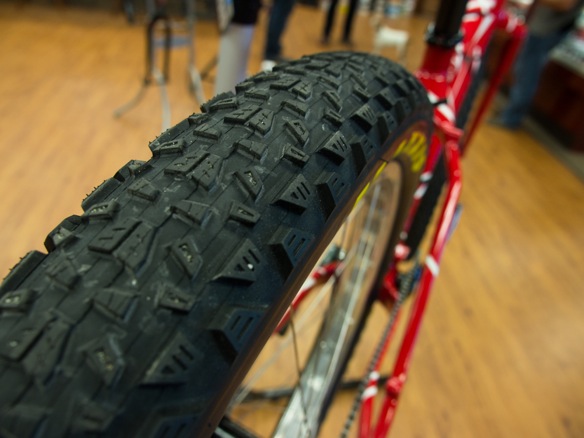 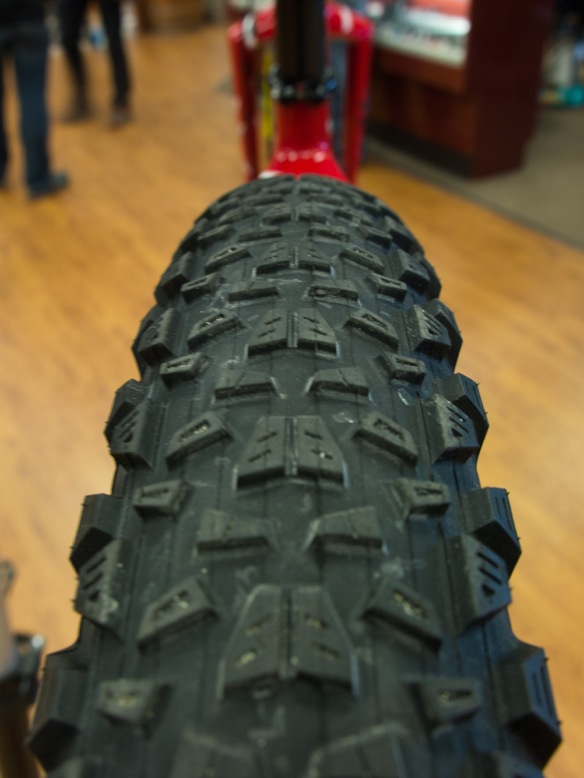 A Corvus hanging from the ceiling also wears a pair of prototype Maxxis fatbike tires.  Looks like an Ardent for a fatbike, nice. 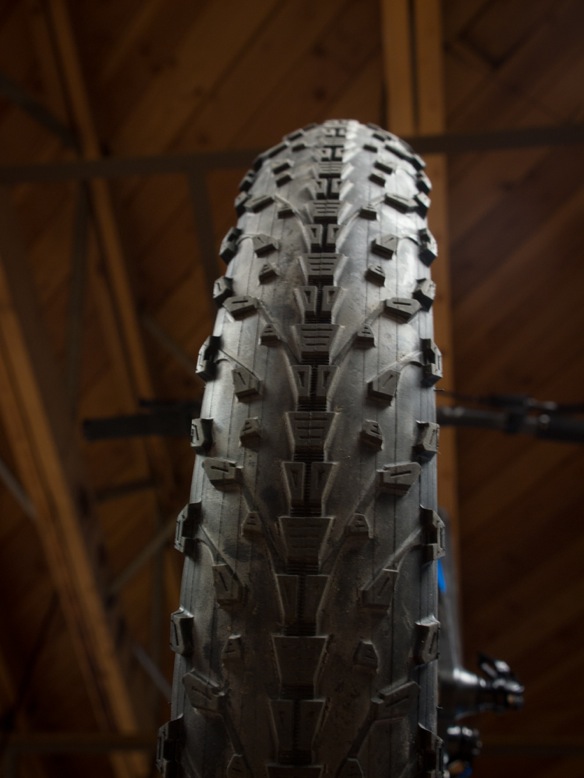 Out on the trail, I spot this 2016 Surly prototype.  It looks to be a carbon fatbike frame with a forward thinking trail geometry, or is it a dedicated lightweight 29+ adventure bike?.  Not sure on the spec of the Surly suspension fork, but it appears to fit a full fatbike tire as well as this 29×3.0″ Knard.  The new Surly carbon cranks look nice. 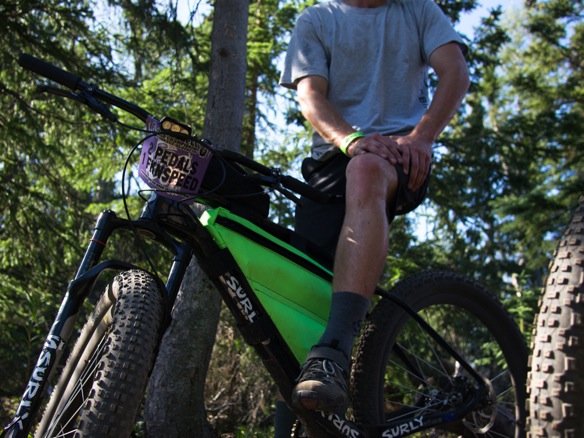 Meet at the Midnight Sun Brewery for a ride.

Ride familiar trails out the Campbell Tract and onto the Hillside STA trails. 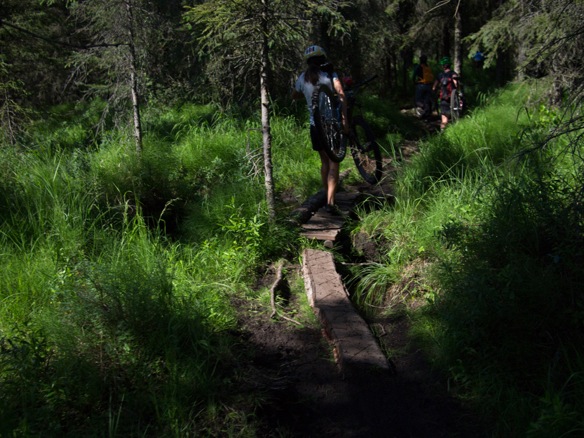 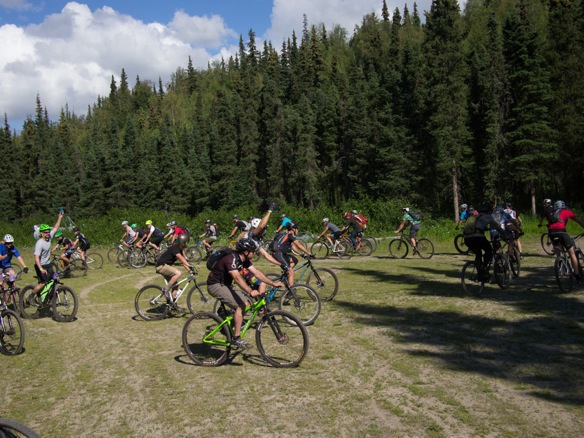 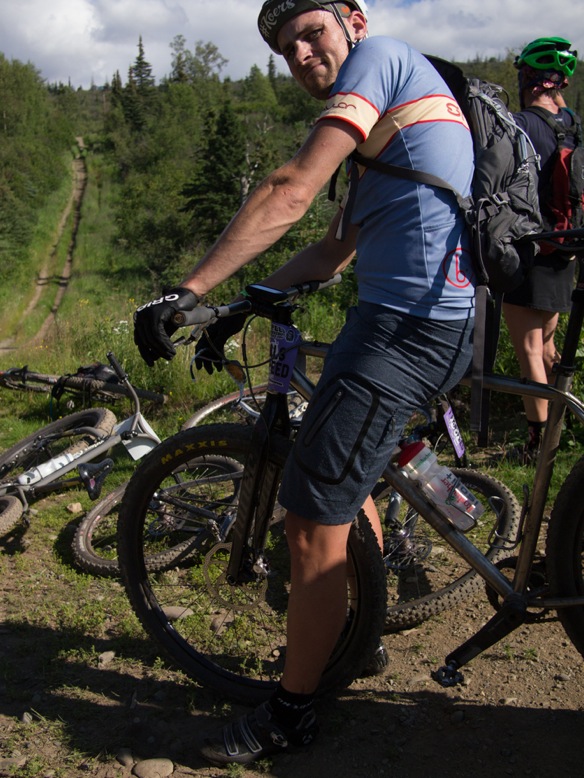 Dressed for the “race”. 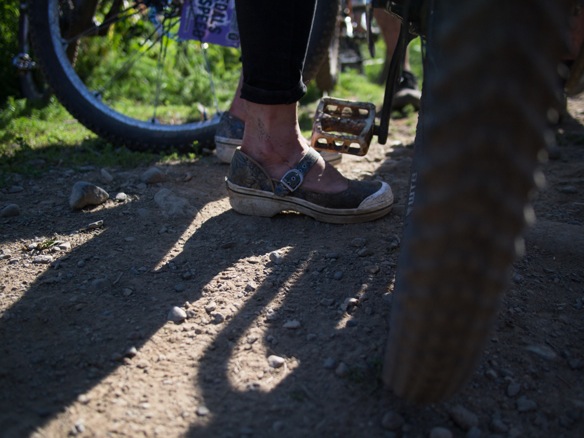 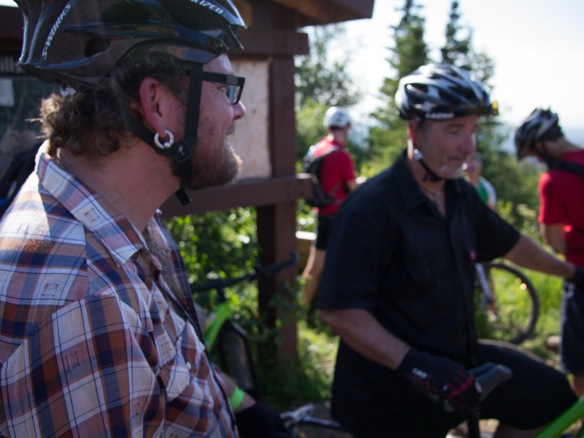 Mandatory race stop.  Ok, this isn’t the race.  That happens sometime on Saturday or Sunday, or whenever Dejay wants it to happen.  Some people think waiting to know is fun and funny, others prefer more order.  Rumor says, the race start will be announced at the Carousel Bar at last call on Saturday night at 2:45AM.  This editorial about SSWC on the Bike Mag website is the best I have read.

Then back to the SSWC festivities.  We weren’t officially involved, although me manage to intercept more than a few rides and activities in our last few days in town.

This qualifier involves a bike and a blindfold and about 100 people.

This guy decides when things happen.  Or, they just happen. 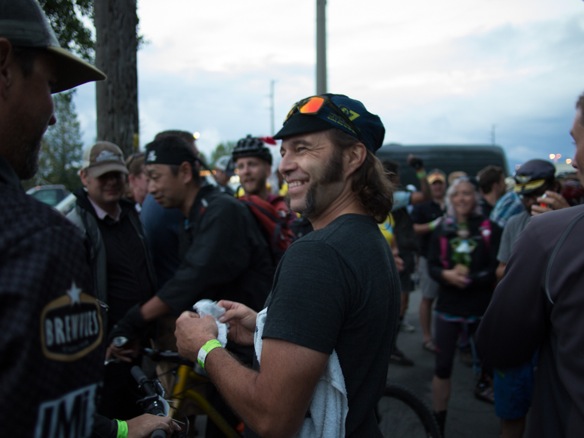 Stay between the orange barrier.  Wear a costume if you want. 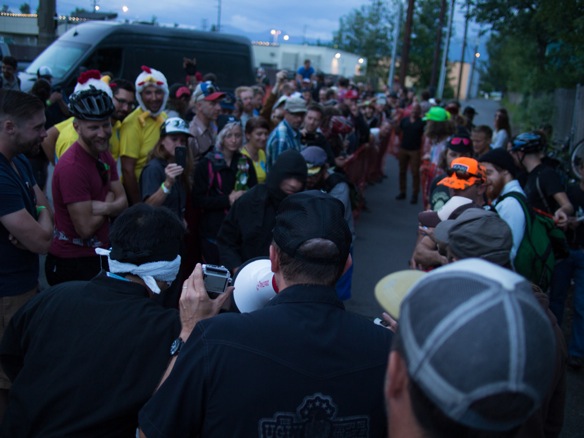 More places in Anchorage you won’t read about in a Lonely Planet guidebook.  SSWC, if nothing else, was a nice way to discover Anchorage trails and dive bars.

On Saturday, we rallied a few friends together for a ride up to Resurrection Pass from Hope. 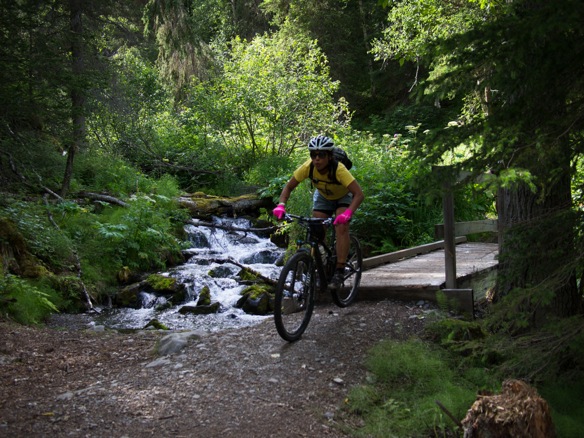 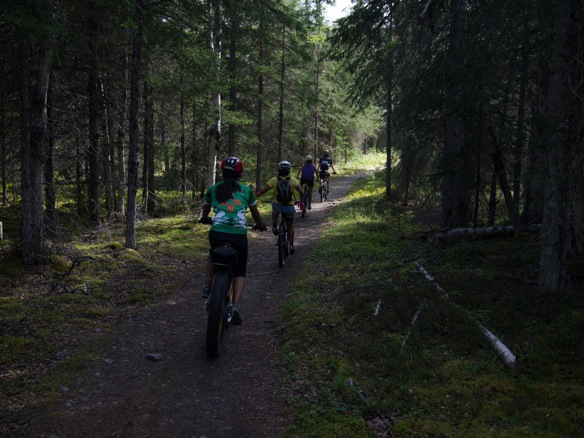 Our food stop before leaving town was an Asian-import store.  Who knows what’s inside the Muay Thai energy drink, but it seems to be working.

This trail isn’t too overgrown, for Alaska.  Some of this stuff is itchy and prickly. 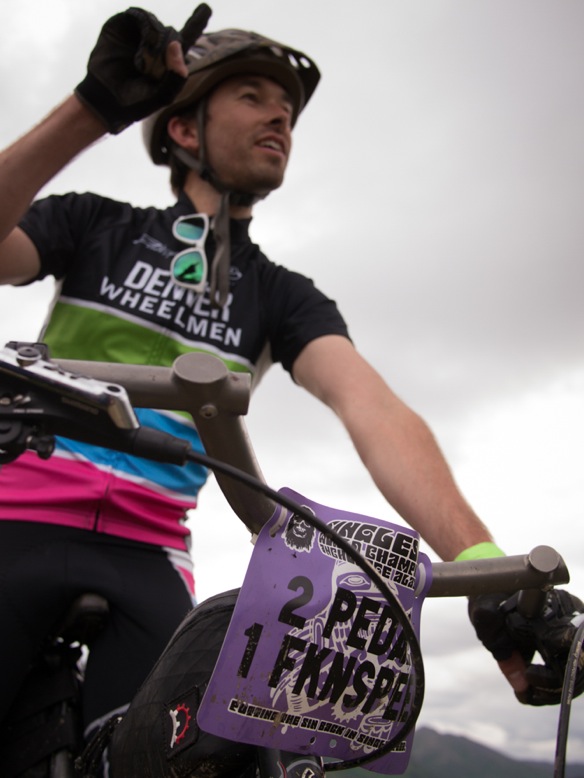 Christina is the ever-ready ringleader.  She was the crux of Lael’s support crew for the Fireweed 400.

She’s riding her brand new Trek Fuel EX.  After a shoulder injury from a collision with a car in SF, she’s happy to be back on the bike.

Up near the pass, we head back down to the trailhead with a chance of rain.  As we arrive at 11PM, rain is falling steadily. 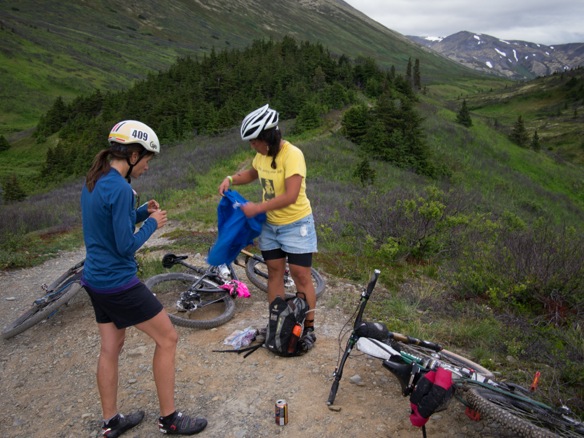 We return to Anchorage in time to find out when the SSWC race will take place.  With bleary eyes, we enter the Carousel Lounge at 2AM, past a huge bike pile.  The bar is full of drunken singlespeeders, costumes, a metal band, and a mosh pit.  I’m all gears and country-rock, I discover.

Eric completes a very special framebag the day before we leave town.  We’d talked about a special seatpack as well.  What time do you leave tomorrow?

30 minute box job, times two.  Receive seatpack from Eric.  Ride to the airport.  Check in.  Take a seat on the plane.  Sleep.

By now, we’re somewhere in Slovakia, I hope. 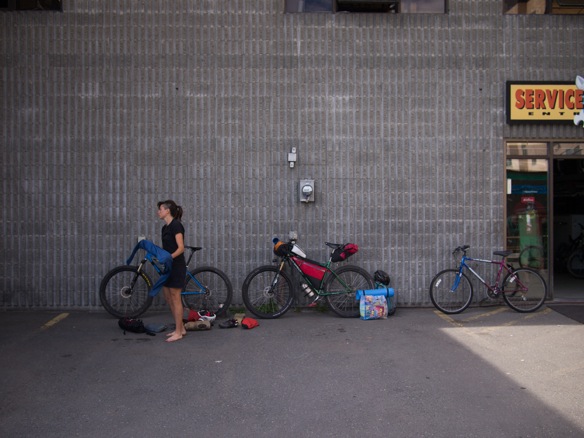 Yes, by now we are in Slovakia.  More soon!

If you’re looking to keep up this summer, keep your eye on Lael’s Globe of Adventure for more current words and images.