Meet in Podgorica on Friday, 8AM.  Actually, now it is Saturday at 8AM, or 9, or something.  Looks like three trains are coming from Belgrade in the morning, not sure.  We arrive in the city the night before and seek inexpensive accommodations.  Walking around a city at night is contrary to our usual touring pulse.  Montenegro, and I think Albania, are contrary to the pulse of Europe.  More Turkish flavors are found here.

At the station in the morning, we wait at the cafe.  Hot burek, and cold beer are on the menu.  Here, coffee is a sacred thing.  We have a habit of gulping it down.  The locals sit for hours.  Espresso machines are common, although turkish coffee is always an option, for half the price.  It’s turkish cowboy coffee.

Przemek and Saŝka arrive on a 24hour train from Slovenia via Belgrade.  It’s a long ride, made tolerable by a sleeper cabin.  In these parts, smoking is unofficially permitted everywhere, in sleeper cars and cafes.

We ride into the city to finalize bicycle assembly, and organize our packs.  Crossing paths with a wedding party on a photo shoot by the river, they borrow our bicycles for some fun.  I wonder how their wedding photos with the 29er Surly Pugsley will look to their relatives.  Bikepacking honeymoon in Montenegro?

A quick trip around the city to fill up on food and water and we are off, still not sure where. 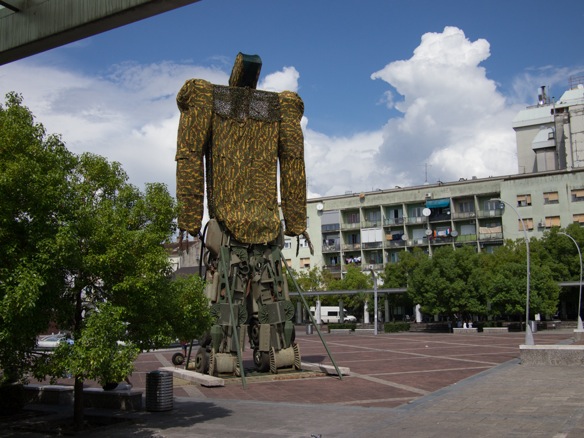 Looking east, the high mountains call.  But rain clouds repel.  Instead, we ride west into the lower mountains around Shkodër Lake, a small fold of earth between saltwater and freshwater. 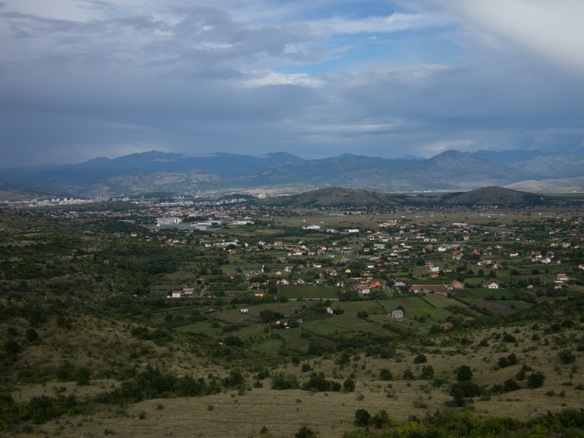 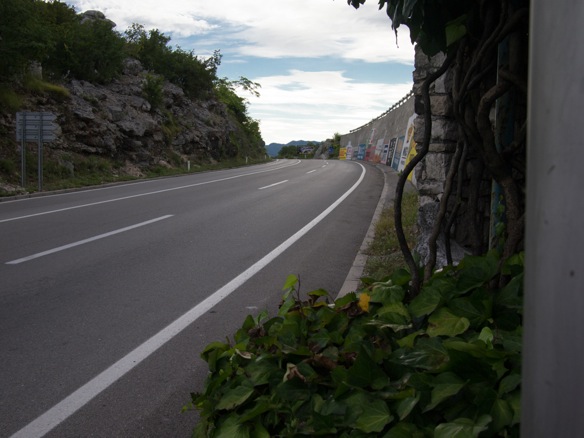 Serene paved roads abound.  We are discovering that the Balkans are really ripe for some high-powered road touring.  Lael wishes for the carbon road bike she rode all spring.  Not that there aren’t off-pavement routes to discover, but Serbia and Montenegro are mountainous, and generally well-paved, with little traffic everywhere except the main highways.  Plenty of climbing and descending in every direction.

Hiking routes in the area are much too rocky and steep to ride.  But small roads keep our interest.  We’re happy to be out of the rain.

Local touristic signage indicates wineries and this curious “honey trail”.  There was a gorgeous stone house at the end of the road.  Not sure the relationship to honey; no tales were told.

As the sun begins to fall, we talk about plans to camp.  We’ll ride a bit further to splash around in the stream before bed.  It looks like a stream on my map.  In fact, it is a significant inlet to Skodër Lake, a large shallow freshwater lake on the border of Montenegro and Albania.  It can be hard to see big topographic features such as this on the GPS.

Descending down to water level, now only 15ft above sea level, we find a campsite near the center of a small town, adjacent to an old stone bridge.

Thankfully, the sun is shining and the water is clear and cold.  I couldn’t be happier, and I manage to go swimming five or six times before we depart. 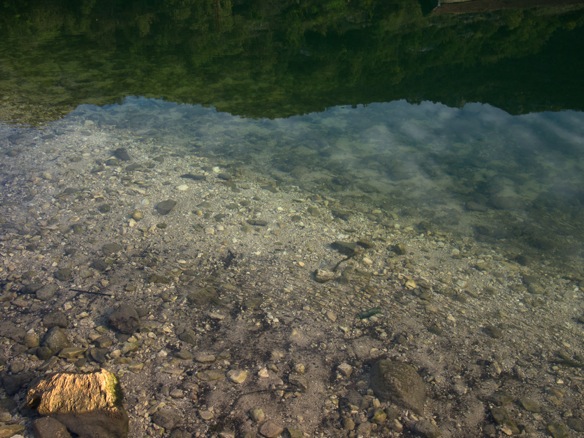 Climbing into the hills, we stop at a vista with a handful of tourists from countries across Europe, including Latvia, Hungary, Poland, and Slovenia. 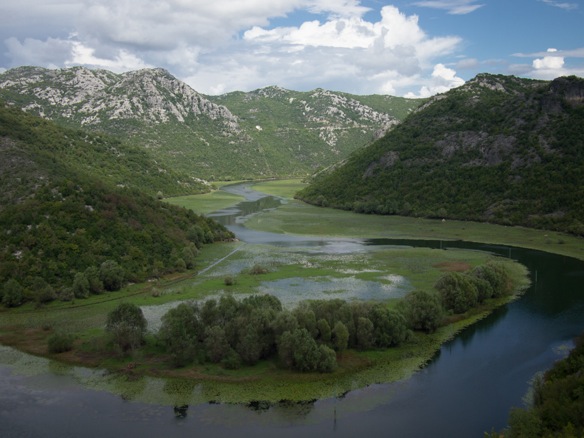 Grape vines and a sign for “Vino-Wine” lure is down a driveway.

We are welcomed by twin brothers over 50 years old, who make wine as a hobby.  They live in Podgorica during the week and retreat to the mountains on the weekend.  The grow Vranac grapes, which are common in Balkan wines.  They also make rakija, or homemade liquor, in a small quantity annually. 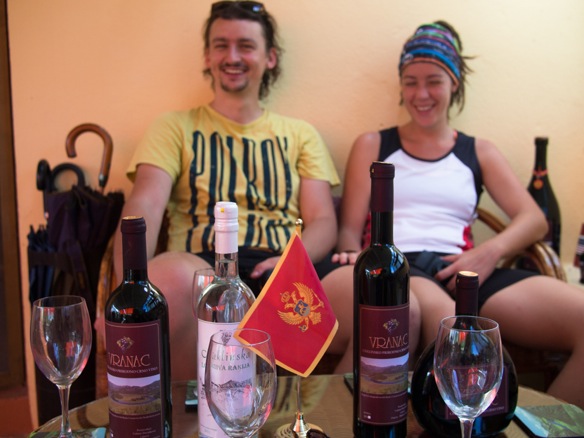 Aside from the wine, they are especially proud to have hosted visitors from 94 countries.  They are excited to make it 95 with our arrival, until they discover that Alaska is part of the USA.  This summer they add several new flags to the wall.

As we climb and descend, new perspectives of the lake come into view.  The lake swells with the season, and has a highly variable area.  The lake averages only 15ft deep. 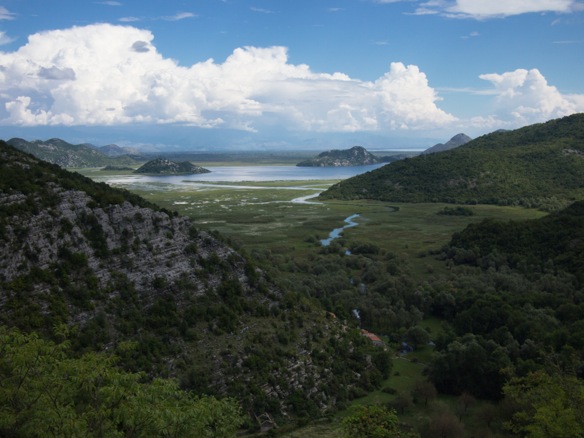 Barely ten miles down the road for the day, I turn back to find Przemek and Saŝka.  I find them with new friends.  Hospitality is serious business in many Balkan countries. 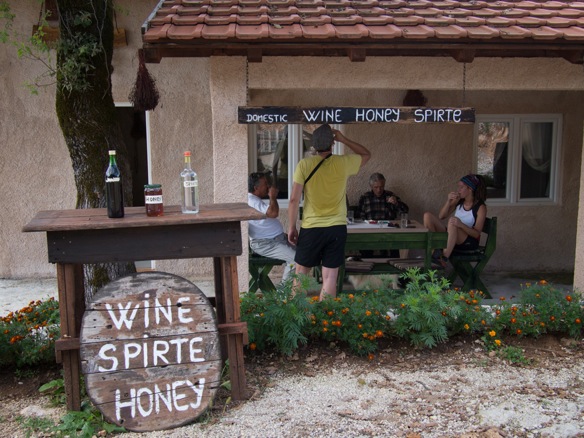 It begins with a drink of rakija. 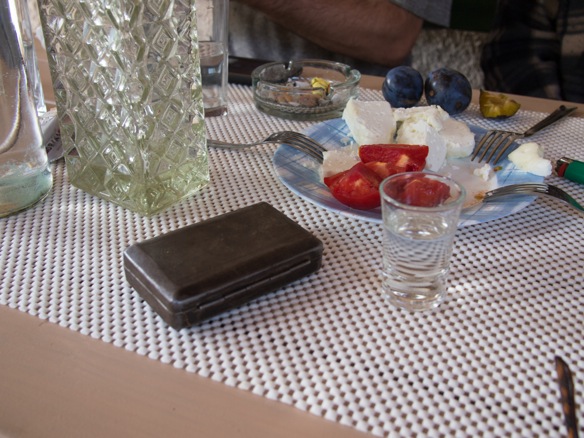 And some small talk, photos, and a few slices of cheese and tomato.  Lael trades some plums for an apple.

It’s a long story, but six hours, two gunshots and several times more rakija than anyone ever needs in a day, we roll into the evening sun.  The goal is to find a place to camp.  The gunshots are the kind that involve zealous hosts, not any ill will.  Zoran is happy to share everything with us, and sends us off with a bottle of his own wine, cheese, duhan (tobacco), and of course, rakija.

We pass through town for some basic supplies, and ride into the night.  In the dark, we find a small rocky pull-out aside the road.  For a bunch of drunk cyclists in the dark, we didn’t do too bad.  At least, I discover that in the morning.  Views of the lake aren’t bad, for the price.  Few cars pass in the night.

Our impromptu route around Skodër Lake turns out to be a delightful ride, and a good way for the Polish-Slovenian contingency to stretch their legs.

From afar, we thought the lake might be a big swamp.  In fact, the road feels like a slice of Highway 1 in California, without any traffic, stores, or gas stations.  There are several towns below the road. 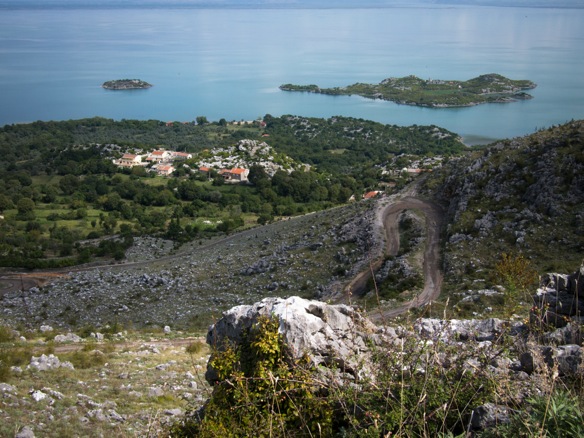 Cheese for sale, almost always from goats or sheep anymore.

German cyclists are also abundant in these parts. 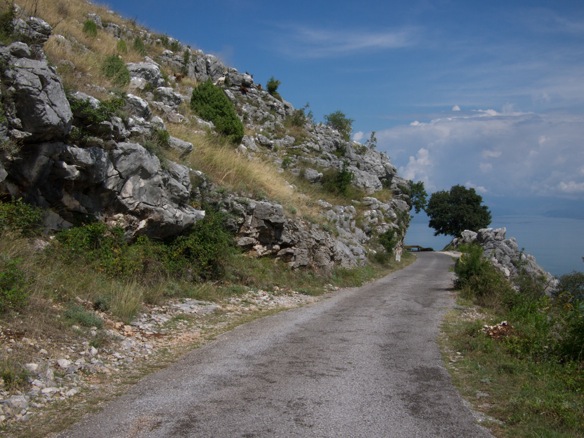 As we climb to a valley away from the lake, we encounter loads of figs and berries, and eat until we are full.  It takes a moment to decide what the broad leafy plant is, but a big whiff in the warm breeze makes it clear that it is tobacco.  We pass through shady forests of chestnut trees. 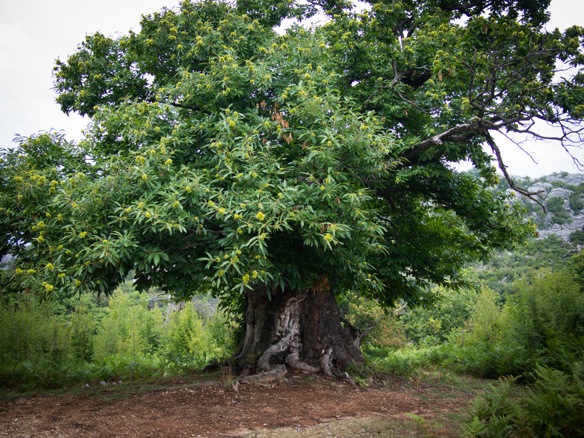 Przemek remarks that the rotten looking figs are best, especially those dripping with caramelized sugars.

Montenegro has recently gained independence form Serbia, and for the most part, the countries are quite similar.  But along this route, all of a sudden, signage is now also in Albanian.  The towns look and feel different.  Mosques replace churches.  Things are changing.

We climb and descend away from the lake, towards the coast and the official border crossing.  The ride over the mountains passes within a few hundred meters of Albania.  An abandoned structure guards the ridge. 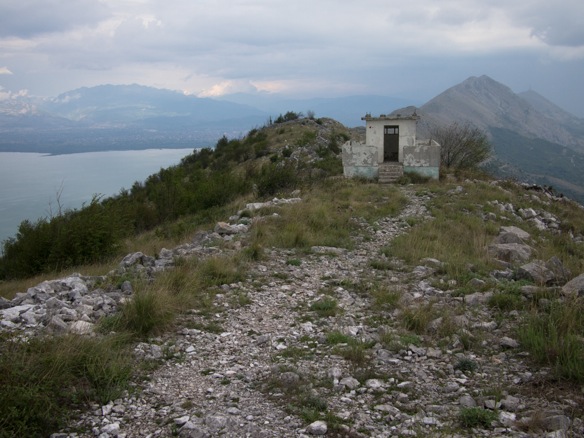 We plan to wait until morning to cross the border, and find a campsite near this old town site. 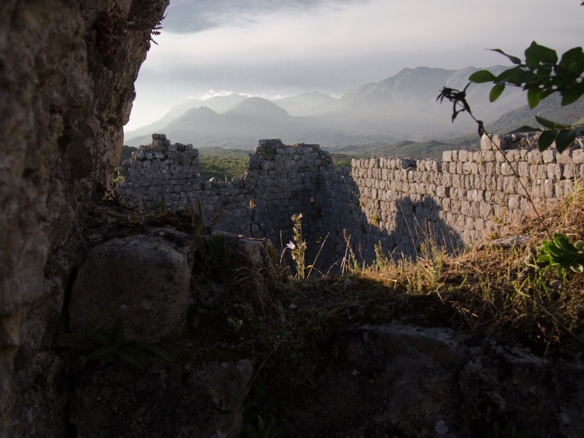 This is still Montenegro, but we might as well be in Albania, politics, pomegranates and all.

At the border, guards quickly look at our passports and wave us through.  This has been the most relaxed crossing so far.

4 thoughts on “Around Shkodër Lake, Montenegro”