No culture shock, except two-thirds of every road sign is illegible, and one-third is in English.  And, for the first day we don’t know the exchange rate from shekels to dollars, so Monopoly rules apply (try not to spend, but it is not real money so who cares).  The other two languages are Hebrew and Arabic, with Hebrew on top.

Leaving Egypt, border agents rigorously inspect a few chosen items, ignoring most of the rest.  They seem most curious to fondle the sack of flatbread in my framebag, ignoring the conspicuous 2L steel bottle on the underside of my down tube.  Israeli border agents are far more professional, interviewing each of us separately to determine how we manage to travel with so little luggage, for so long.  “Don’t you stop to see the sights?”  Lael informs her that we are always seeing sights, all the time.  Our bikes are loaded onto the conveyor and sent through the x-ray machine.

Public bathrooms with sit-down toilets and paper and hot water, and they don’t cost two rand.  Free sugar packets from every roadhouse.  But cane juice is gone and the bread isn’t as good as Egypt, and everything seems really expensive except it’s really just like America.  Local kibbutz communities do produce organic dates, olives, goat yogurt, and wines; although expensive, they are worth the money.  The biggest homecoming to the first world?  Some schmuck who asks too many questions he already knows the answer to, while I am eating.  Don’t interrupt my meal to be a schmuck.  I’m far too familiar with this practice.  Americans do it well.

We connect signed dirt trails straight out of Eilat, linking to the Holyland MTB Challenge race route and the Israel Bicycle Trail the next morning.  The Holyland MTB Challenge took place for the first time last April, connecting the southern border at the Red Sea to the Golan Heights in the north, near Syria.  The Israel Bike Trail will also connect the country north to south, and is currently complete from Eilat to Mitzpe Ramon, included miles and miles of freshly signed and graded singletrack through the mountainous desert.  Thus far, in two days of riding, the two routes coincide for much of their distance.  Thus far, the riding and camping is Israel is great.

Leaving Eilat and the Red Sea.

Hiking and cycling trails, signage not seen since Europe.

Designated camping areas minimize impact on the land.  Often provided for free, they do not have water, but offer space and fire pits.  So far, I’ve seen only drive-in sites on dirt roads. 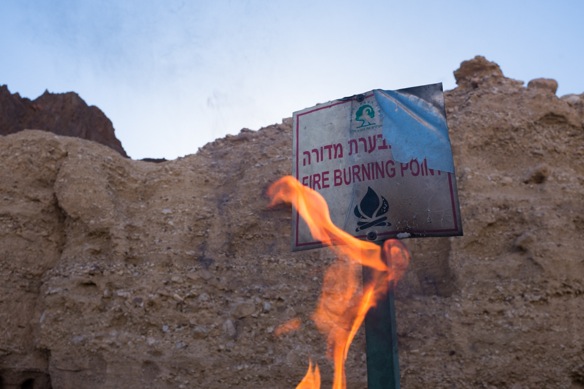 Technical riding on rocky sandy footpaths, trying to find our own way through the mountains.

The colors of the Israel National Hiking Trail. 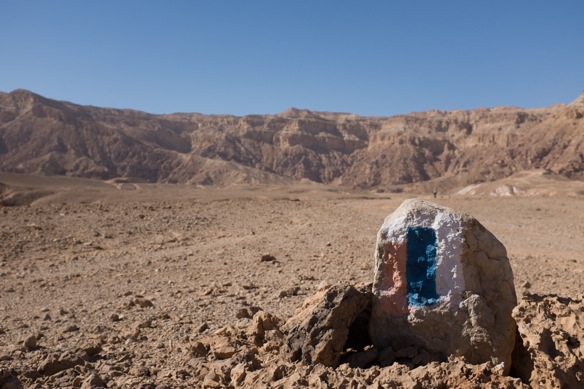 Which provides a shortcut up a mountain.  We choose to hike our bikes to avoid a $12 per person park fee, required by way of the main dirt road and the HLC/IBT route.

Which opens up to a rideable plateau up top and a playground of trails. 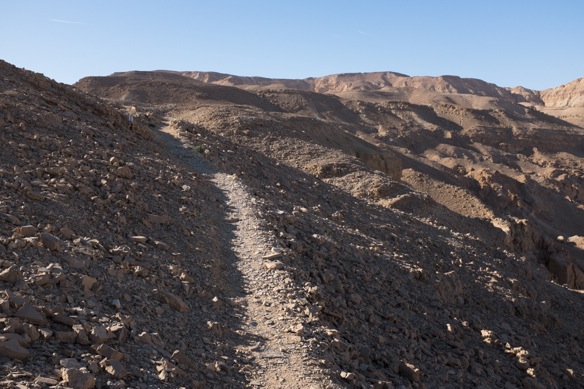 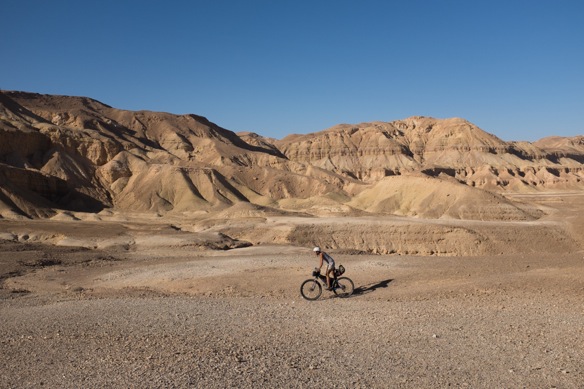 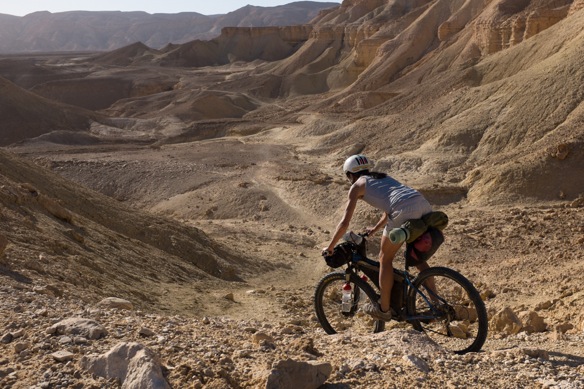 Eventually connecting to the IBT and the HLC route.

Incidentally, IBT signage only routes from north to south– no signs coming from the south.  Hopefully the northbound signage is forthcoming. 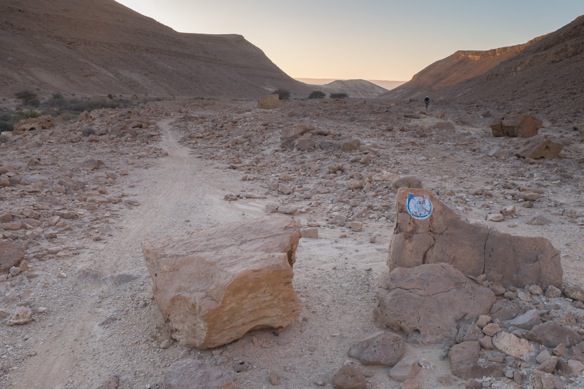 And an unofficial wild camp on an east facing ridge.  A campground listed on my GPS turned out to be a commercial quarry.  Instead, we take the opportunity to camp up high, overlooking the Aravah Valley and Jordan. 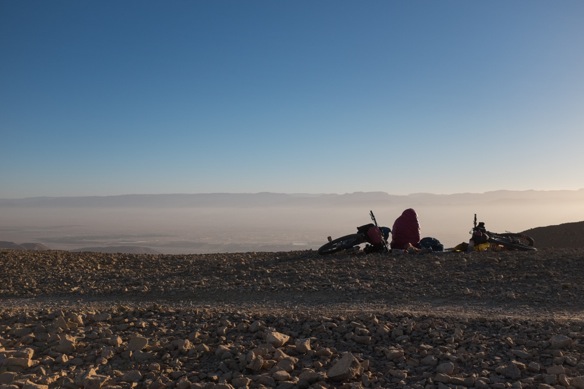 Haven’t found alcohol for our stove yet, so a fresh cup of singletrack will have to do.  The imprint of the trail-building machines can still be seen.  Jordan in the distance. 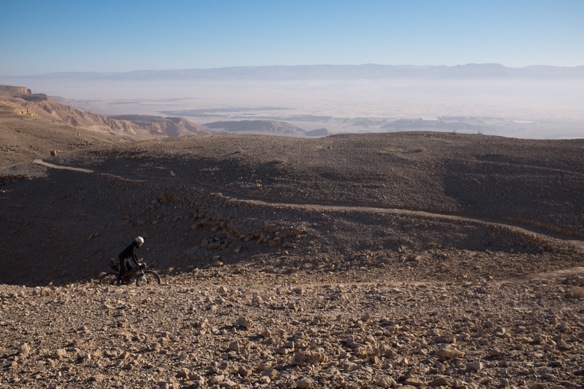 Old trail, and new bike-specific trail, both apparently in use.

Some sand, not too much, but just enough soft stuff to think that now would be a good time for 29+.  Are those Surly Dirt Wizards available yet?

Fresh goat yogurt at our only resupply point for the day, the cafe at kibbutz Neot Semadar. 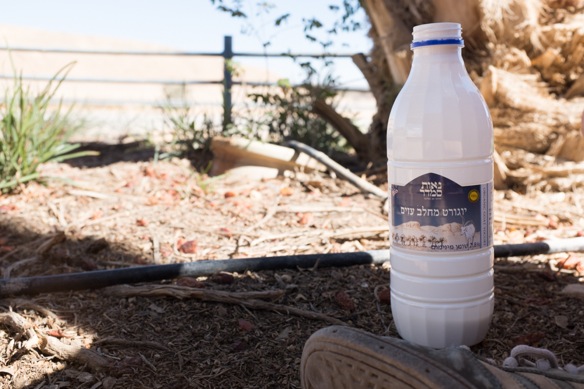 Arroyos, called wadi, which is Arabic for valley, usually a dry desert valley.

We plan to ride a few more days of the HLC/IBT before turning west to meet a group of riders over the weekend, which will lead us back south toward Eilat.  Thereafter, we shoot north to meet our friend Christina in Tel Aviv, who is flying from Alaska for ten days of sun and sand in the desert.  Cool nights, warm days; dry, not too hot, fresh trail– nothing not to like.

11 thoughts on “From Eilat on the IBT and HLC, Israel”

Leave a Reply to Tales of Wandering Cancel reply