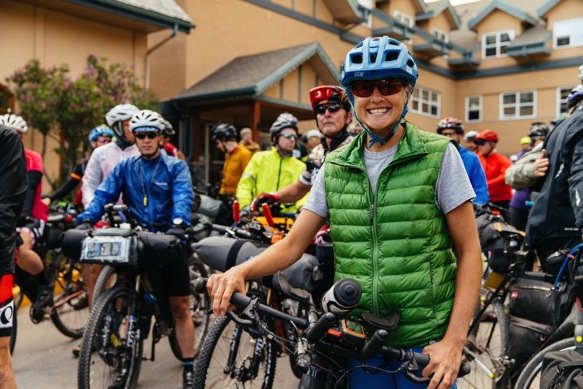 “All smiles” at the Grand Depart in Banff.  Check out this awesome photo set from the start of the race on The Radavist, including a great shot of Lael’s Revelate Designs tattoo on her calf and her shiny new 36T X-Sync chainring.  Photo: John Watson at The Radavist.

No news is good news.  Since recovering from a week of serious illness, Lael has pommeled the pedals and crawled back into a strong standing.  From memory, she was the 10th place rider on the first night after a very difficult 183 mile day, at the first sign of respiratory issues.  The next morning she walked over Galton Pass in respiratory distress.  Four days later, she pedaled over 100 miles from Ovando to Helena to the hospital.  She was in and out of town in less than four hours, with a handful of meds, a full resupply for the ride to Butte, and the hope that the worst of her problems may be over.  That night, riding until 3AM, she  passed Alice Drobna and Bethany Dunne in the dark, hiking one of the more challenging sections of the route as they slept.  Lael was up early to maintain her position, but on the next night, she was forced to camp early once again as respiratory distress ended another day.  The following morning I received a phone call from Lael at the Montana High Country Lodge.  She said she’d try riding a few more days like this, but she would not ride all day and pass out every night in an asthmatic fit.  Even if she could, technically, she wouldn’t.  She was afraid of the condition and was riding well below her target.  She would, one way or another, continue along the route, but not necessarily in the context of the race.

She called from Lima later that day and said she felt well enough to continue.  She finished the day at 183 miles at Red Rock Pass.  The next day she rode about 191 to the base of Union Pass.  Then about 172 route miles to Atlantic City– plus a few extra as she ventured off route on the old TD track, a discrepancy that was resolved in Pinedale with an updated track to include the upcoming Wamsutter reroute.  She technically finished that day six miles beyond Atlantic City at the edge of the Great Basin.  Crossing the Basin and the rest of Wyoming in one push, Lael pedaled another 173 miles again yesterday to the base of the Brush Mountain climb in Colorado.  She stopped at the Brush Mountain Lodge this morning and remains in the company of five other riders all within 20 miles, all riding well below the 20 day pace.  Besides the lead group of 6 men pushing record pace three hundred miles ahead, already through Salida, there is only one other rider in Colorado at the moment.  Michele Miani is an Italian southbound rider whose tracker indicates his position in Steamboat Springs, but he is not shown on the Leaderboard function of Trackleaders.com.  Officially, this puts Lael in 13th place overall.  Whereas she was once in about 26th place overall, and was trading positions with Alice and Bethany, she is now the lead female by about 140 miles.  Lael is less than 1200 miles from Mexico.