What type of FRAME do you want?

Modern trail hardtail 29er with clearance for large-volume tires (2.4” plus mud), and some special considerations for long-distance travel. Your orange 29+ bike is gorgeous, for aesthetic reference. I can live with less than 3.0” tire clearance, but I need real 2.4” clearance. Ardent/Hans Dampf/Minion DHF plus mud. That’s the idea. 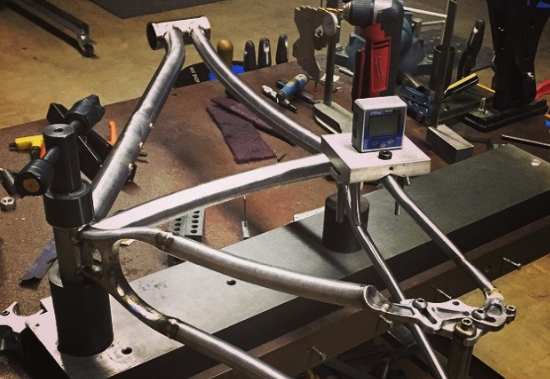 A series of letters with Whit Johnson, who meticulously designs and crafts Meriwether Cycles in Foresthill, CA in the foothills of the Sierras.  He specializes in modern hardtails, fatbikes and plus-sized bikes, big-tire road bikes, and bikepacking dream machines.  Whit has been kind enough to entertain over a dozen e-mail exchanges in the past week, some of them many pages long, to hone in on the perfect bike.  I was first attracted to his detailed exploration of frame design for big tires and adventurous rides.  These letters represent only a fragment of our discussion and are more about finalizing the details of the frame.  All images borrowed from Whit’s Flickr page, and all are recent projects. Visit the Meriwether Cycles site for more information, or Whit Johnson on Flickr for lots of half-naked bikes, and @meriwethercyles on Instagram.
N. Carman– 8/5/15:
I rode the Kona Honzo yesterday, no ROS 9 in stock.  The Honzo felt good, nothing special, not as spry as I might have expected.  I think the ETT was 635.  Let’s stay closer to the Krampus and I will use a shorter stem if I want to change the seated position.  I’d rather subtract at the stem than add. You’re right, the longer TT lengths on these bikes is part of the feeling of security on the steep stuff.  How about 625mm, split the difference between the Krampus and the XXIX.
I meant that with changing standards, the single-bolt FD might become obsolete.  You know when you see a bike with a u-brake under the chainstay, or with roller-cams, that it was sold in 1986-87.  Just yesterday I saw a new FD mount on a 2016 Stumpjumper FSR that attached with one bolt from the back side.
I have several issues with 1x gearing for my purposes.  I want to build my drivetrain on widely available cassettes, currently maximum 11-36T.  I would want to use widely available rings, and the 26/28/30T rings I might need for climbing don’t fit 104BCD.  Direct mount rings are impossible to find even in good bike shops in the USA, especially as there are something like six or seven different bolt and spline patterns for these rings.  If I leave the country for an extended tour I will replace my entire drivetrain at some point along the way.  I lost count, but I probably cycled through six chains last year, 2-3 cassettes, and two sets of chainrings.  I think we each went through two or three BBs on tour, although Lael has killed a few more on the Divide bike too.  Surprisingly, brake pads seem to last forever.  Perhaps that is due to adequate but not monster stopping power with the BB7.  Lael’s year in review includes– as of this week– a sixth bottom bracket, although this one is being replaced as a precaution for her ride.
So, DM front dérailleur.  Go ahead and do it however it needs to be done, but I intend to install my current SRAM X5 single bolt DM derailleur.  I will probably never stray outside the range of a 32-36T chainring on a double, although currently working to wear out the stock 38T ring that came on my Shimano crank.  I like 36/22 for most of my riding, and usually revert to 32/22 for a longer tour.
The hike-a-bike handle or portage bar is not the same as the brace on a Surly frame.  It should be lower than my current hand position (just under the seat post clamp on the seat tube) to require less arm strength and more straight arm lifting with my body.  On really tough stuff I reach down to the chainstay with the TT in my armpit and the saddle nose over my shoulder.  On easier stuff when I might still roll the bike I lift from the section of seat tube just under the seat post clamp, but my hand slips and it requires substantial hand stregth.  A horizontal hand hold is much better than a vertical tube.  Not sure about angle and placement exactly.

Yes, the Advocate Hayduke does seem to have most of the numbers I am looking for.  I like the look of the dropout, wonder what the SS version looks like.
The True Temper DT looks great on your bike, very subtle.  I like the curved top tubes, a signature on many of your frames.  However, from the perspective of framebag design (and using off-the-shelf bags), a straight TT is better for me.  I really like the look of the wishbone stays, but I already get pretty cozy with my seatsays while descending so curved stays might be better in back.
I’ve seen Russell’s bike a few times but this time is really captured my attention.  Plus, the idea of using “normal” width 2.3-2.4″ tires on 35-40mm rims is exactly what I want to do.  Where do I get a Pike with those decals?  Awesome!
The current stats are: 430(+/-) CS, 625 TT, 68.5 HT, 51mm fork offset, 60mm BB drop.

Whit– 8/5/15
Cool you got to try out the Honzo. It is by far the LONGEST front end out there. I’m sure it rips the down but I can’t imagine it climbing well.

What about an E-type front derailleur? I’ve never used one but it would definitely make it look clean and simple and would be easily removable when you wanted to go 1x.  I have a Shimano XT that I could give you actually. I got it for a bike I was making and didn’t end up using it.

All good on the specs. I’ll assume a Pike 120mm axle to crown. I now just have to figure out how to get 3″ tire clearance using a double ring with 22/36. The Paragon Yoke won’t do it unless we go up to 450CS length, maybe 445. I was hoping that yoke would work for this frame but I think the only way will be to do a plate style yoke. I can try a different method than on my brown bike to make it stiffer laterally. This is always the crux of the frame and takes the longest to figure out and fabricate.
The Rockers will help with mud clearance, as you pull them back you’ll have more tire room, obviously. The green bike you sent a photo of has very little tire clearance with a 2.4 on the 38mm rim. He initially said he was going to use a 2.35 Ikon on a 35mm rim but changed it later to a 2.4″ on the Light Bicycle 38mm rim. Not a huge difference but he says there’s only a few mm’s of space to the chainstay. No mud clearance basically! That is with 420 CS, single direct mount 32t ring, and a 142×12 non adjustable dropouts.
He did the color coordination on the Pike, isn’t that cool? He ordered them from someone, not sure but I can ask if you’re interested? It turned out really nice. That bike weighs 24.7lbs as seen and is a strong frame since he is an all-mountain rider that is almost 200lbs.
Just to make sure i have the standover set ok, is 840 the MAX you can tolerate? I’m erring on the bigger front triangle size for a bigger frame bag. A 115 head tube will help and your 3/4″ riser bars would be pretty much level with your saddle with 30mm of stem spacers. This is assuming a 531mm axle to crown on the 120 version of the Pike.  I’m finding either 536 or 531 for the Pike.  How much sag do you run on the Fox? 20, 25, 30mm? I think the Pike is recommended to be at 25% so that’d be 30mm.
That is insane you go through that many drivetrains! I can see why but that’s just nuts. Definitely do NOT go with XX1 then. They’d last a couple of weeks!
Finishing a frame up this week, could start yours this weekend. 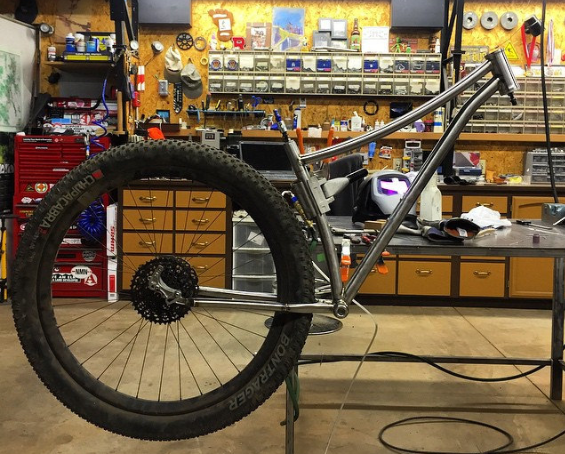 N. Carman– 8/6/15
Regarding 3″ tire clearance.  I don’t feel inclined to use 3″ tires at this point and I do not need or want to use 29×3, probably ever.  What I really want is a 29er that rides/handles better than the Krampus and fits up to 2.3-2.4″ with some spare room, even if this requires some adjustment via the dropouts.  I could run the wheel forward most of the time (let’s say, about 430mm, when trails are dry or when using 2.3), then run the wheel further back if I am on bigger tires or it gets muddy.  The target rim and tire is 35mm rim and 2.4″ Ardent.  I have considered ordering some 40mm rims, but I will probably skip it for now.  It would only be an incremental gain, for a good bit of money.  I am happy with the 35mm rims.
I’ve never put 3″ tires on the Krampus and the only time I wanted to in the last year was in Jordan, in Wadi Rum, but even then 2.4″ Ardents on 35mm rims at 10psi got me through some deep sand.
If we can build 27.5+ compatibility into this design, let’s do it.  If not, skip it.  I don’t care that much about it right now and I know I’d be able to wedge some 2.8″ Trailblazers in there if I really wanted.  I am really liking my 29.5″ wheels.
I’ll probably cover my fork in electrical tape and bottle cages, or hose clamps, although those custom decals look awesome.  I’ll get back to you on paint.  It is kind of hard to pick from the digital representations on their site.
I’d prefer a direct mount FD.  E-type requires a cable stop and tire clearance probably isn’t as good as with direct mount.  Shifting is also better with DM.  Go ahead and braze that little square mount to the frame.  Not a problem at all.  When I go 1x in the future I can order one of those fancy plates to cover it up.
Max 840 sounds about right.  I measured 780-840 along the middle of the TT on the Krampus, Surly calls it 830.  This works pretty well although I could give up a little standover for framebag space.  My PBH was 840, without shoes.
Yeah, 8 and 9 speed drivetrain is where its at for us.  I’ve used 8sp stuff for a long time but anymore the low quality cassettes that are available wear out too quickly.  Lael was tearing though cheap 8sp cassettes while my Deore 9sp cassette lasted much longer.  I’ve also recently come to prefer the performance of Shimano chains, at least for my 9sp system.  They are stiffer laterally, resulting in crisper shifts.
Thankfully, we’ve got a friend working at SRAM in Indianapolis who has helped Lael with a series of XO1/XX1 drivetrain parts for her Divide bike.  Before the TD he shipped a new ring, chain, cassette, and pulleys to replace the one she rode from AK.  Surely, it wasn’t that worn, but I thought it best to start fresh. Just this week, he shipped another load of drivetrain parts to her in Banff.  She loves that stuff.
I can’t wait to build this thing up and ride it.  I hope to tour for about a month this fall before riding east to Austin where we will spend the winter.  Looking at returning to Arizona and maybe, finally riding most of the AZT.  I’ve got friends in NM.  Still thinking about spending the weekend with Eric and Dusty at Interbike talking to people about bikepacking and Revelate.  I guess I could hopscotch from your place in the Sierras down to Vegas, AZ, NM, TX.  This is kind of how we plan things.
Time to start thinking about paint.