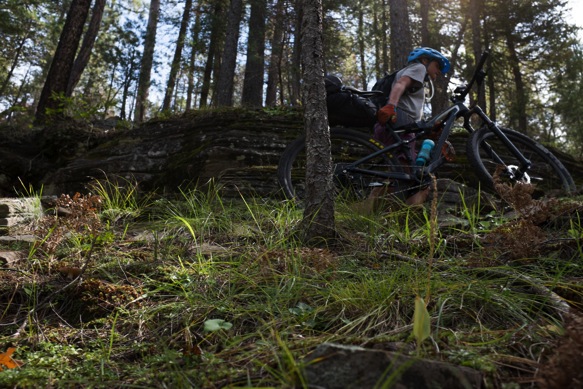 Lael is at it again!  She left the northern terminus of the Arizona Trail at the Stateline Campground along the Utah/Arizona border on Monday October 26th at 5:24 AM.  She intends to ride the length of the Arizona Trail- – specifically the bikeable AZT750 route— as fast as possible.  This individual time trial (ITT) will take more than a week, and requires that she portage her bicycle through the Grand Canyon, strapped to her back.  At the time of writing, only 23 hours after starting at the Utah border, she has exited the Grand Canyon at the South Rim and is en route to resupply in Tusayan.  She hopes to reach Flagstaff by the end of the day.

The Arizona Trail is a nearly 800 mile cross-state hiking, mountain biking, and equestrian trail from the Utah border to the Mexican border, ranging in elevation from 1500ft to 9000ft, from shady ponderosa pine forests to scorching Sonoran deserts.  Several wilderness areas require dirt and paved road detours for cyclists, and the established AZT750 route is the version in use during the group time trial informally known as the Arizona Trail Race, held every April.  There is also an established detour north of the Grand Canyon from the North Rim to Jacob Lake along pavement, as snow typically lingers along this section of trail in the spring.  Lael followed this detour, with prior approval, as most AZT750 records have been set along this version of the route.  We toured this section of trail several weeks ago and in the context of a tour, it is highly recommended.

Our tour of the Arizona Trail ended several days before Lael’s ITT commenced.  We toured every inch of the trail from Utah to Sonoita, lopping off the last day or two of riding to get north in time for a weather window. This time of year, in an El Nino season, dry trails up north are hard to come by.  There is a risk of wheel-sucking mud north of Payson, mostly in the section between the Mogollon Rim and Flagstaff.  Long nights will also be a challenge, although a full moon will help light the night.

Several hours of rain accompanied us on the night before Lael’s departure.  Despite freezing temperatures at elevation and the saturated earth, she passed the first section of trail to Jacob Lake with haste.  From the Stateline Campground the trail begins with a series of switchbacks to ascend well over a thousand feet.  I watched her headlamp disappear onto the Kaibab Plateau.

For this ride, Lael is a riding a new Specialized Era Expert, a 100mm travel full-suspension bike.  She is using custom Revelate Designs luggage, K-Lite dynamo lighting, and some other exciting new equipment.