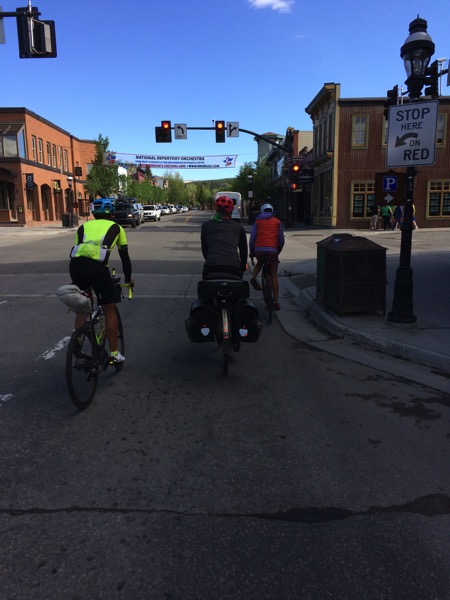 Lael and Evan ride through Breckenridge joined by a Trans Am cycletourist, and our friend Kyle who is behind the camera.  All images courtesy of Kyle Sheehan.

Lael called from Breckenridge, Colorado.  She reported a sliced tire earlier in the day, just before Hot Sulphur Springs, CO, which she repaired by removing the tubeless valve and reinstalling the tire with a tube and a tire boot of some sort.  The whole procedure, from archived tracking data, took relatively little time.  Lael stopped in Breckenridge to replace the tire at a bike shop.  The shop offered to mount a new road tubeless tire, but for fear that the process would take more time than is worth it she selected to get out of town as soon as possible on a new tire and a tube.  Too many road tubeless tires are impossible to mount and remove by hand.  Lael has planned service at Newton Bike Shop in Newton, KS, a well-known stop for both racers and cycletourists on the Trans-Am Route.  Check them out on Instagram as @newtonbikeshop for a good time.

Lael, Evan, and Sarah all left Walden, CO yesterday morning at the same time, around 3:30AM.  Sarah rode today at less than her previous pace, although she managed a longer day than yesterday.  Still no reports about Sarah’s exact condition, although Lael said she “didn’t look good” when they rode past each other yesterday.

Our friend Kyle Sheehan joined Lael, Evan, and the unnamed cycletourist up Hoosier Pass south of Breckenridge.  We met Kyle back in 2010 after our first Baja trip, when I took a job for a few months at Velo Orange in Maryland.  We’ve since run into him in a few places around the country, and he is currently living near the Trans Am Route in Colorado.  He reports, “I honestly have no idea how Lael is doing that many miles every day.  I’m in awe.  Attached is what I took, unfortunately not much  because I was getting pretty worked keeping up with those two.  The one of us rolling out of Breckenridge also pictures this dude on a tour who had veritable suitcases on his rear rack, really liked to talk about weed while riding 2x on a sketchy road, and who totally destroyed the pass.  He summited way before us.  The picture of the first switchback you can make out Lael going around the turn and Evan a little ahead.  It was steeper than it looks, and only got steeper.”  He adds, “She seems to be doing great, super positive and pumped on the ride!”  Thanks Kyle!

Also, check out this short video of Lael riding into Breckenridge, CO yesterday, shared by Eric Morton on FB.  Thanks Eric!

Lael and Evan dropped out of the mountains last night around midnight, reaching Cañon City at the end of the day after their 3:30AM start in Walden, CO, traveling a total distance of about 246 miles.  Daytime temperatures in eastern Colorado and Kansas are expected to increase during the week, with highs over 100F.  Thunderstorms are predicted for late afternoon and evening on Monday.

Steffen holds a 100 mile lead out front, Lael and Evan continue together, Sarah is another 40 miles back, and Kai’s tracker is stopped in Hartsel, but Is suspect he is well beyond by now as that’s very near where he camped last night.

Thanks Kyle for the update and images!