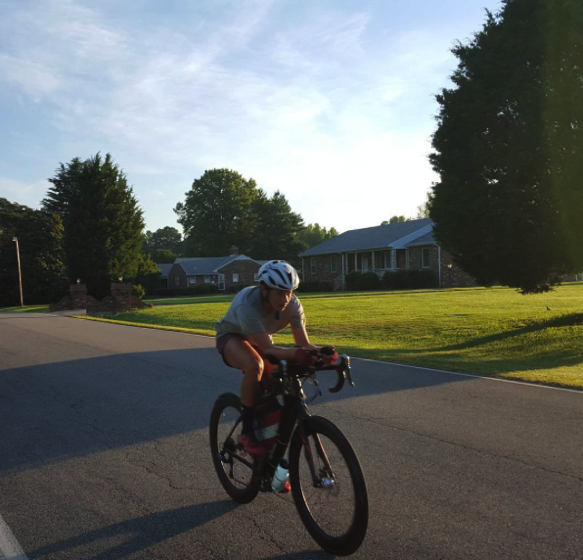 The three leaders of the Trans Am Bike Race began the day in a familiar standing, with Steffen out front by about 50 miles, Lael in second, and Evan about 40 miles back.  Evan put a few miles on Lael in the night, taking one less hour of sleep and closing the gap for second place to 30 miles.  Steffen persisted with a short sleep on that night and was down for less than two hours.  All three riders were anxious not to lose ground, and all three riders were excited to try to gain some distance on the others, if possible.  Heavy thunderstorms arrived on Tuesday afternoon as Steffen, Lael, and Evan summited the Blue Ridge Parkway from Vesuvius to Afton.

Continuing on to Charlottesville, it appeared that Steffen was either lost or looking for something.  He followed a unique route into town, the nature of the detour unknown considering the severe weather in the area.  It is now known that he had suffered a series of flats in the past few days.  From a brief video log on the TABR Facebook page, he verifies the flat tires yet indicates that he did not replenish his supply of spare tubes in Charlottesville, a bustling college town home to many bike shops.  Reports from race organizer Nathan Jones also suggest that Steffen was dealing with a failing GPS device, an internal issue more complex than a dead battery.

Steffen continued out of town and kept pace into the evening.  He settled down by the side of the road just beyond the community of Beaverdam, south of Lake Anna.  He rested for about 2.5 hours and awoke at 2AM.

Lael continued out of Charlottesville several hours after Steffen, keeping pace into the night.  As he hit the ground to sleep, she continued pedaling, gaining on the leader.  Eventually, her tracker stopped for a period of about 45 minutes.  She called when she awoke to tell me that she had slept, was feeling good, and was gunning for Yorktown.  In concert with a shot of 5 Hour Energy, she was riding high into the night.

What happened next stunned all that were watching.  When Steffen awoke at 2AM, he began pedaling backward along the route.  He was riding right towards Lael!  She had closed the gap to 20 miles, and the two were now racing toward each other.  Eventually, the pink dot and the blue dot collided near the community of Bumpass, VA.  One can only imagine the brief conversation they had, and the heartbreak of learning that you have just lost a lead won over 4100 miles in a mid-night mishap.  Steffen righted his tires and rejoined the race to the east.  Both of their trackers transmitted intermittently during this period.  It took some time to see who would come out of this situation ahead.  Surely, Steffen has proven to be a much faster rider throughout the race.  But Lael recovers well and remains rested, at least as much as can be expected after a 250 miles day and a 45 hour nap.  This was her first night with very little sleep.

Race organizer Nathan Jones reported seeing both riders together right around this time, but once the trackers transmitted, it was clear, Lael was in the lead.  As more regular tracking resumed from both devices, Lael maintained a narrow but consistent lead.  Steffen stopped briefly at one of the first junctions after their meeting, which indicated that he was indeed having issues with his GPS.  But he managed a series of turns along the route thereafter, so he had some means of navigation.

Evan stopped in Charlottesville for several hours, although it is difficult to determine his exact stopped time.  He rolled out of town around 3AM EST.

At the time of writing, just east of Richmond, VA, Lael leads with only 70 miles remaining to Yorktown, Steffen is 10 miles behind, and Evan is about 80 miles back from the leader.

It is too soon to speculate much about Steffen’s error, although a few things are known from a series of rambling video logs from Nathan Jones on the TABR Facebook page.  It is known that Steffen has suffered a series of flats and is riding without a spare tube to the finish.  His GPS has been failing him, likely requiring frequent restarts or other manual manipulation.  He is tired, as is expected.  He has been riding fast and far, and has tapered his sleep over the last few days.  It is an unfortunate error, much like Sarah Hammond’s deviation from the route in Montana.  It is a feeling that Lael knows well, as she deviated from the official track in the 2015 Tour Divide, following an older course.  Officially, she was disqualified from the race, although her time was considered valid.  As a result of this error, and the risk of GPS failure, she carries two Garmin eTrex 20 units, each loaded with maps and the race track.  She is not carrying maps.

I will be at the finish line today as our three riders cross the line.  Over the past 17 days, we’ve come to know the way they sleep and the pace they ride, we often know what and where they eat and what kind of company they keep.  I look forward to welcoming Evan, Steffen, and Lael, along with Kai, Sarah, Benjamin, Janie, and anyone else that will arrive in the next few days.  A least for a minute, I don’t think Lael and I are going anywhere fast.