Nearly 200 people attended our Baja Divide presentation in Missoula, MT, hosted by FreeCycles. Thanks to Bob Giordano for hosting!

I spent the summer working at The Bicycle Shop in Anchorage, AK, while Lael was busy riding and racing across the country in the Trans Am Bike Race.  I picked her up in Virginia, we limped north to NY, CT, MA, VT and back to NY, and flew west to Montana to celebrate Adventure Cycling Association’s 40th anniversary.  We flew back to NY for a wedding, and to complete the Baja Divide route.  And that’s where we are now, drinking coffee and writing all morning, swimming in the afternoon, writing some more in the afternoon, enjoying family dinners every night, watching the Olympics in the evening.  Since Lael tripped while running on the trails at Wellesley Island State Park the other day and sprained her big toe, we’ve also put in considerable effort to watch the entire West Wing series in a very short time— it’s the least I could do to get her to sit still long enough to heal.  I’m repeating some of the details of the past six months because otherwise, I’m not sure I’ll remember them.  Somehow, every year seems busier than the last.  I’d like to derail that trend in the near future.  Baja California is always a good way to reset the clock.

We’ve completed the section narratives, which describe the route in 20 segments each beginning and ending with major resupply, detailing route features and riding conditions, resupply challenges, and rewards.  It features a distance and resupply quick reference.  The route guide is 75% complete and will be finished this week.  It is a resource which describes the route as a whole, and assists in planning and preparing for a ride on the Baja Divide.  This includes discussions about the route, bikes, luggage and packing, camping, food and water resupply, traveling in Mexico, getting to and from the route, and an ultimate pack list.  The GPX track is nearly complete and currently provides context of the entire route.  Our GIS associate in Alaska, Rob Clark, is currently on a boat in the Arctic and will return with the complete edited track in a few weeks.  I sent him north of north to the Bering Sea with a giant folder of edits which he will use to manipulate the track into its final state to adjust for errors, noise, and other extraneous data.  We met Rob at the after-party to the Talkeetna Trio fatbike race in Alaska this spring where he offered to help with the project.  In fact, Rob spied Alex’s signature helmbrero, they started a conversation which led to talk about Baja and Rob’s offer to help with the project.  He couldn’t have imagined the birdsnest of GPX files that I would dump in his lap.  We have also been working with a man named Roman de Salvo in San Diego, a volunteer field agent who we met at a presentation last February.  Roman is responsible for much of the route from the San Diego Airport to Tecate.  Just yesterday, Roman completed and signed off on that segment, which was the final hole in the route.  Additional thanks to Alex Dunn and Montana Miller for helping with route development south of the border.

Lael and I will have all of the Baja Divide content complete by next week when we fly to Denver to ride the Colorado Trail.  The new site will be published in the beginning of September when we have the final GPX track.  We will be at Interbike in Las Vegas with Revelate Designs again this year.  We are working on some displays and events relating to the Baja Divide.  Anyone planning to drive from Durango or elsewhere in Colorado to Las Vegas with room for two riders and two bikes?  We could probably find a way to get to I-70.

Also, Lael has been publishing an account of the Trans Am Bike Race on her blog, state by state.  Check it out! 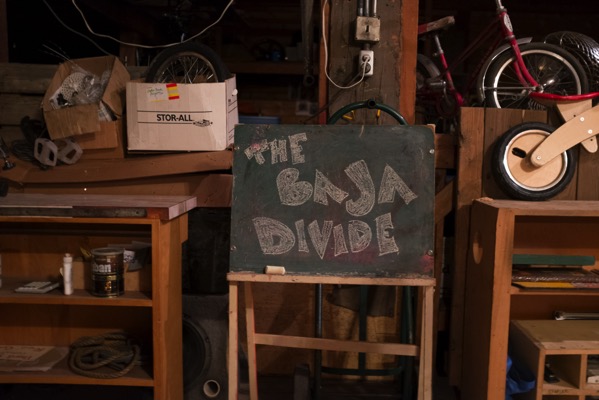 This update is also being posted to the Baja Divide website.