As the sun settled in the west, long rays traveled up the Santo Domingo arroyo. There, a crowd of more than 20 people had assembled near the river. Children were throwing stones and adults were standing, watching in quiet conversation. When I first arrived by bike with Salvador, I wasn’t sure why everyone was there. This arroyo is normally dry, but now, it flows with up to two feet of water, which is a worthwhile attraction in the desert. I went swimming, and just as I did, a man with a video camera appeared to interview me. He was intimately familiar with backcountry Baja 1000 routes in the area and was excited to record this momentous occasion, even though the details of the event were not yet clear to him. Two women, upon learning that I was the partner of the girl who was riding her bike, shook my hand and introduced themselves. Young boys looked on shyly and returned to throwing rocks in the river. Of course, everyone thought I was crazy for going swimming. It was 70F degrees and sunny and the water felt like bathwater, although local people still feel the sting of winter as the season turns to spring.

A teenage boy no more than 13 years of age dropped into the arroyo down a steep embankment, riding a carbon Niner hardtail. Salvador’s friend brought his drone, which he unpacked and prepared for flight. As the moment approached, all phones were watching trackers and all recording devices were enabled.

A white helmet turned the corner, a short distance away across the water. It was moving at an unexciting 7.5 miles an hour, and nobody cheered. They watched with great curiosity as it approached the crossing. Salvador was first to break the silence, “Go Lael!”, and a couple adult joined the mostly quiet response. Lael reached the edge of the water, surveyed it as low speed, then pedaled into the crossing. Half-way, she unclipped and pushed her bike across the remaining distance. Once she reached the near bank, the crowd quickly approached her. The two men who were recording video immediately launched into professional-style interview questions, “How do you feel?” and “Where are you going?”. Children simply crowded close to the action and were ready to join a photo without notice.

As Lael prepared for departure, I saw the chance to assemble the group for a photo. The group lined up at the water’s edge, Lael poised in the center. After over a year of route research and planning and many months of publishing and organizing the group start and the women’s scholarship, this moment was surreal. Surely there was some of the energy and excitement of the Baja 1000 and some of Lael’s usual excitement for racing, but the the true flavor of the Baja Divide was present— the people. Everyone was truly excited about this moment.

The sun had set, and Lael clipped back into her pedals for the ride ahead. The young boy on the Niner followed close behind. Salvador managed to stream live video to Facebook while riding his Specialized Turbo Levo. A man on a motorbike also kept pace— about 7 miles and hour— for several miles. Three riders plus Lael continued in the foothills of this agricultural valley along the Pacific Ocean to San Quintin, about 20 miles away.

Lael chose to sit for a real meal in San Quintin. She ordered quesatacos at the taqueria, which she selected for its proximity to a local market and an OXXO convenience store, which she visited while waiting for her food. She returned and ate two tacos, packing the other two in the plastic bag used to cover the plates so they don’t have to do as much washing. She packed as much food onto her bike as possible for the long ride ahead. She would continue into the night, passing Nueva Odisea when all the shops were closed. Further, she planned to skip resupply in Cataviña which is about 6 miles off-route, each direction. The only possible resupply between San Quintin and Santa Rosalillita— a distance of 240 miles, would be three small roadhouses on the highway. They serve hot food and often have some sodas or cookies on a rack, but are not really a place to draw a full day of food. Lael packed water to get to El Descanso, the second of the roadhouses, which has purified water in their kitchen. There she would gather enough water to get to El Cardon and any additional food needed to reach Santa Rosalillita. If needed, the third roadhouse on this section at San Augustin has some food and water, but is about a mile off route. For Lael, consistent forward motion is as important as riding fast and hard.

Lael finished her second day of riding at mile 302, completing four miles of beach riding at midnight and riding just far enough beyond Nueva Odisea to gain some distance from the ocean and the moisture that accompanies it. However, this area commonly receives heavy dew at night. She resumed riding at 4:30 AM, which suggests she might have had a cool and damp three and a half hours of sleep. The forecast continues to be clear of precipitation, with temperatures warming this week. She will spend another night on the Pacific side before crossing toward the Sea of Cortez at Bahia de Los Angeles. The east side of Baja is consistently warmer and drier than the Pacific. As she continues south, the weather will also become considerably warmer, with highs in the 90’s later this week.

Today, she passes one of the most exotic parts of the route as she enters the Valle de los Cirios conservation area, which features thousands of towering cirios trees. 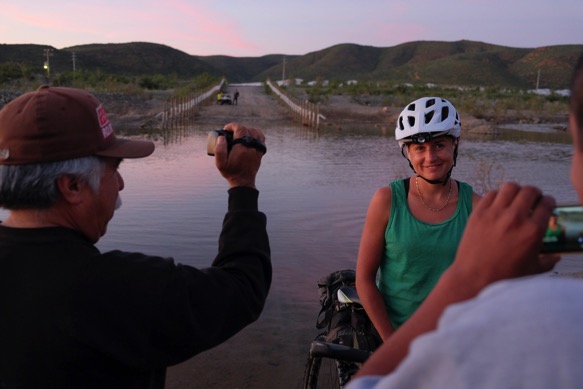 Thanks to everyone in Vicente Guerrero that showed up to cheer Lael on her ride! 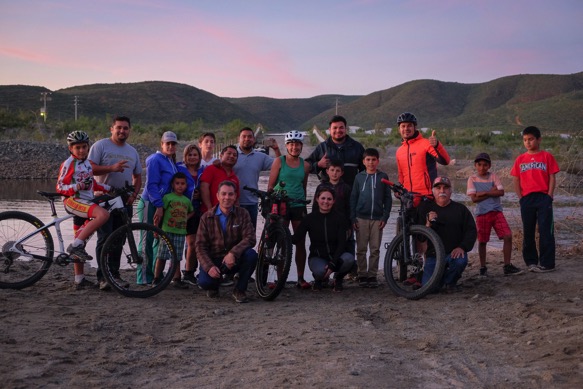