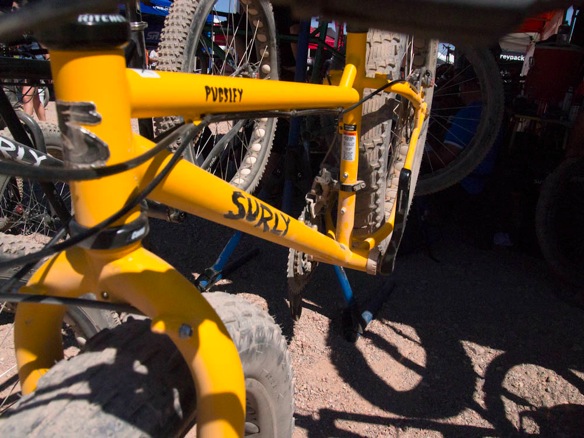 With temperatures in excess of one hundred degrees, riders were dying to try Moonlanders and Krampi.  I have been accused of a simpleminded approach to bicycle tires that “bigger is better”, but the Outdoor Demo at Interbike is proof that others are interested in big rubber.  It proves that others have the capacity to dream big and find use for fat tires.

Surly Bicycles are the center of the fat tire universe.  Designed to fit the Moonlander and other fatbikes, the new 4.8″ Bud and Lou tires are front and rear specific and join the Big Fat Larry as the largest tires available for maximum flotation, suspension and traction.  These tires also fit other fatbikes such as the 9zero7, Fatback, Salsa Mukluk and even the Pugsley, although drivetrain modifications may sometimes be necessary so that the chain clears the tire.  Several new tires from other manufacturers are filling the gap between 2.5-4.0″. 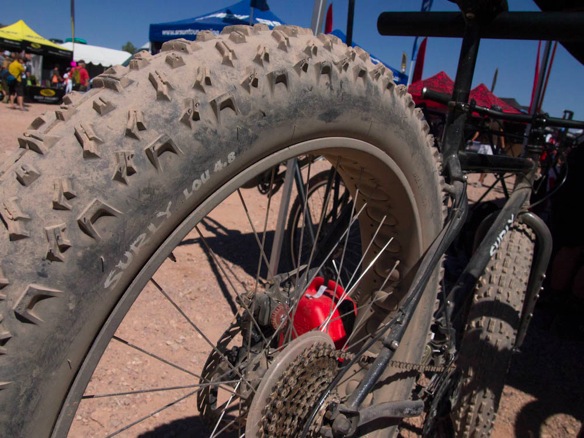 The Fatback crew from Speedway Cycles in Anchorage weren’t showing their bikes at a booth, but brought several premium offerings for casual display.  This stainless steel singlespeed model is particularly nice, with 90mm UMA rims and Big Fat Larry tires. 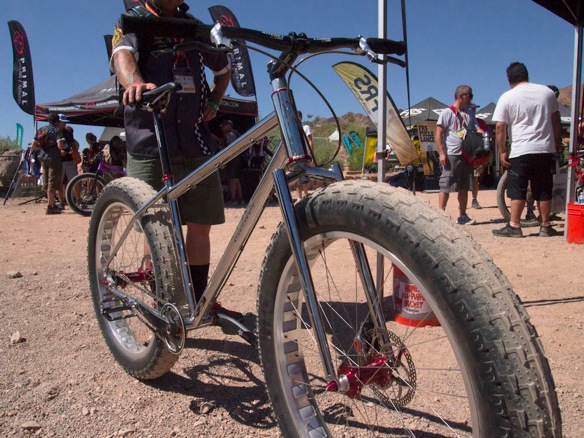 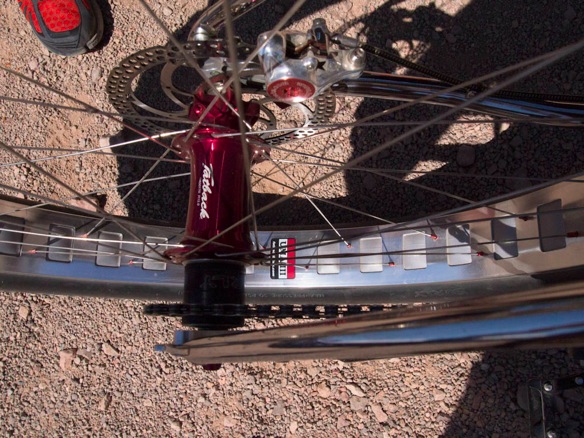 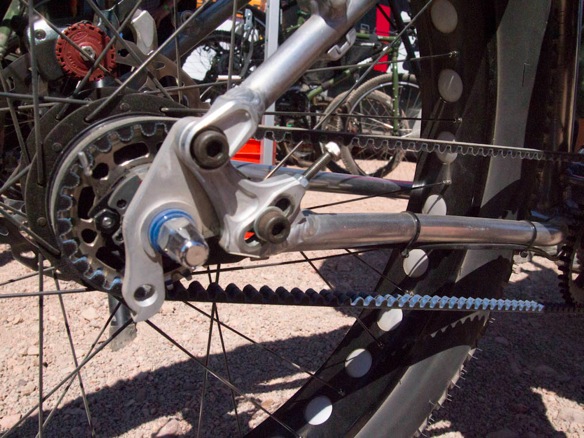 Vee Rubber featured an inspiring breadth of tires in incremental sizes and tread patterns.  Notably, the Vee Mission is available in a 26×4.0″ format, at almost 1800g (60tpi).  In the future, lighter models may be available.  Vee is the only other company making a tire in this size, as they also make the 26×4.0″ Origin8 Devist-8er.  The Surly and 45North tires are all made by Innova. 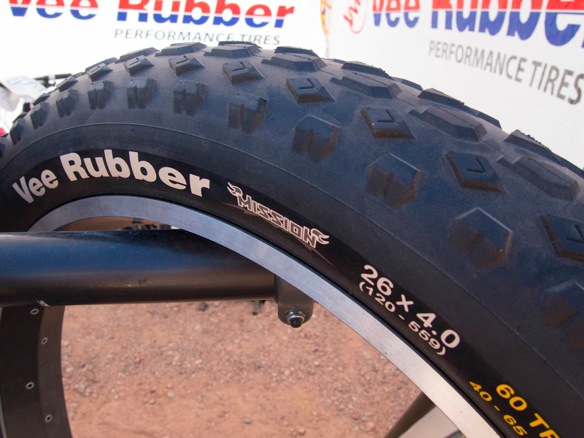 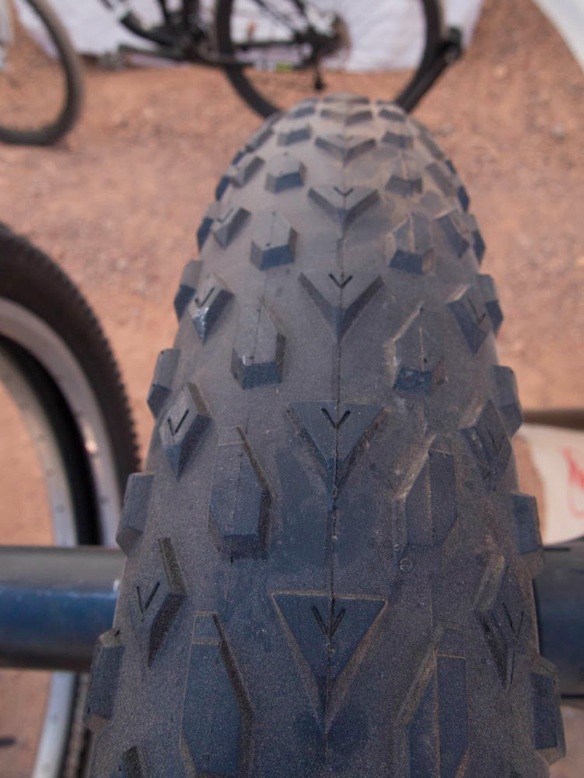 A 26×3.5″ folding tire called the Speedster comes in at a scant 1100g (60tpi), with a super grippy fast rolling compound.  This tire would stick itself to hardpack and slickrock, as well as urban terrain. 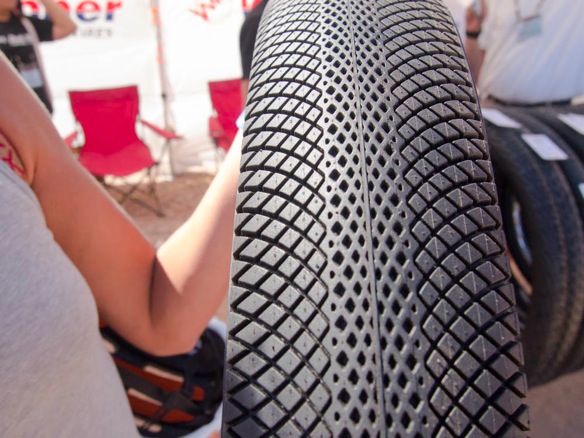 As promised, 45North has released a studded fatbike tire as I had desired all winter.  As fatbikes find their way out of the backcountry and onto icy city streets, a studded fat tire is a necessity.  An average winter commute in Anchorage might include six inches of fresh snow, icy rutted lanes, and crusty sidewalk singletrack.  The Husker Du Dillinger (1275g, 120tpi; 27tpi also avail.) does it all with 240 aluminum-carbide studs.  The Escalator (180tpi) will come pre-drilled for studs with the same tread as the Dillinger, and will allow a custom pattern of studs to be installed.  Finally, a winter tire that will do it all! 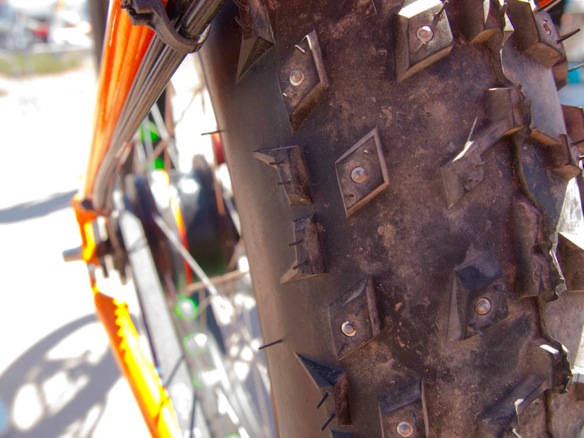 Spotted on a 9zero7 frame, also from Anchorage, Alaska: the new RaceFace Atlas 2-piece crank for 100mm bottom brackets and the 45North Helva pedal, designed with large pins for grip with chunky winter boots and an open snow-shedding design. 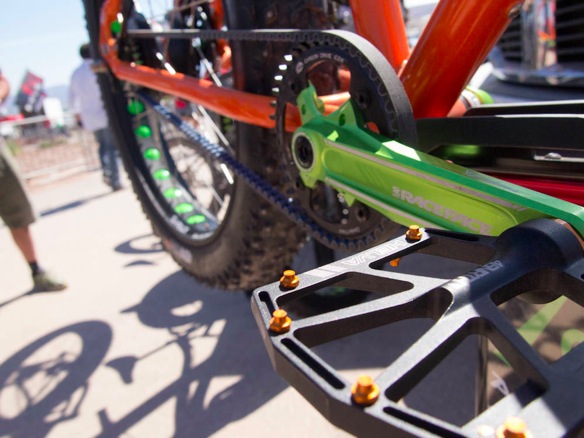 9zero7 released a new 186mm rear dropout spacing to fit 100mm rims, 4.8″ tires and a full mountain bike drivetrain all at once.  With 170mm systems, some drivetrain modifications are required to fit the maximum tires and rim combinations available.  ChainReaction Cycles (9zero7) no longer manufacture their FlatTop series of 80 and 100mm rims, citing the challenges of manufacturing and custom drilling.  “The Surly rims are stronger and lighter” they say.

The Sun Spider fatbike cruiser from J&B Importers features a new mustard yellow color, which is incidentally similar to the new Pugsley paint.  This bike is the cheapest off-the-shelf fatbike at just under $800, and sports a Sturmey-Archer 2-speed kickback hub on an aluminum frame with spider pattern tires. 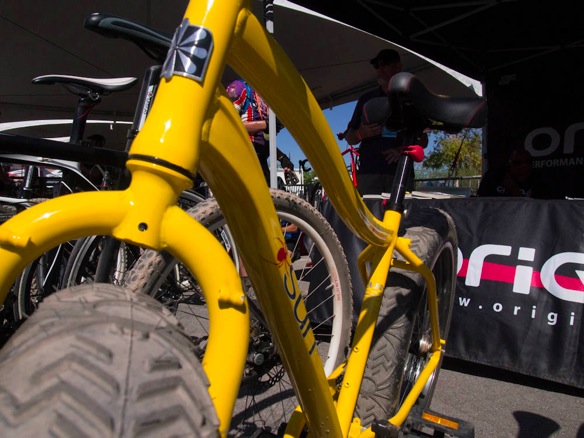 BionX was showing a multitude of popular frames with their electric hubs, including a Surly Troll, Civia Halsted and the Surly Pugsley pictured below. 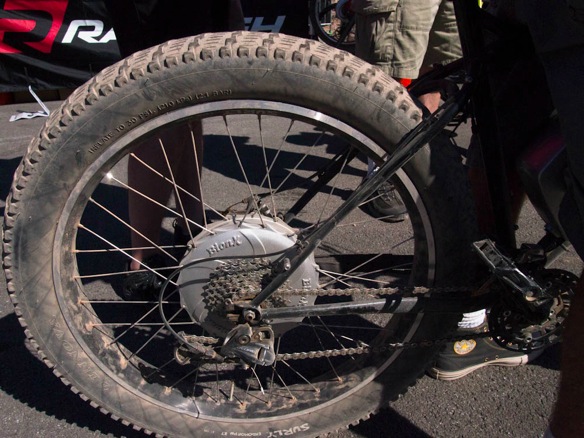 Cass takes the new Salsa Mukluk 2 for a spin, shod with aggressive Surly Nate tires.  Reduce the pressure and ride; take some more out.  Ride.  A little lower…just right.  All Mukluk models for 2013 will come with Nate tires front and rear, which deliver maximum traction in the “standard” 3.8″ fat tire size. 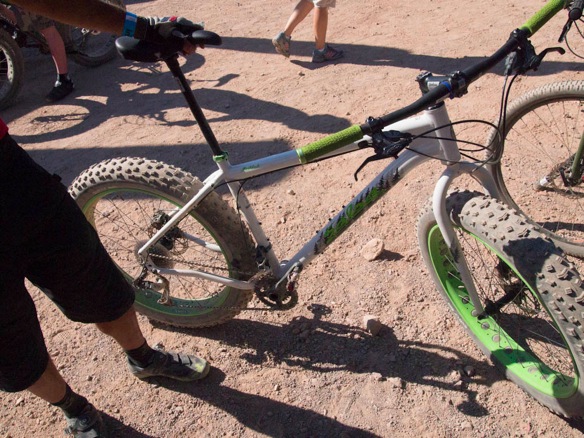 Of course, the Krampus has created a cloudburst of excitement.  Test riders were lined up to ride the fleet of Krampi, with 1×10 drivetrains and the new 29×3.0″ Knard tires on 50mm Rabbit Hole rims.  The bike looks fun and has a levity both in spirit and ride quality, which I appreciate coming from 10 months of riding and touring on a Pugsley.   Cass noted the improved traction and the softened ride in comparison to his Ogre.  The Krampus claims relatively high trail numbers and short chainstays, paired with a short stem and a wide handlebar for a stable ride with tons of control.  Sit back and carve it like a waterski or shift your weight forward and dig the front tire into turns, like an ice skate.  It’s fun and rides like a bike, exactly as it was designed.

Coming off a Salsa Spearfish test ride, Lael preferred the intuitive ride of the Krampus.  The large tires felt more stable and the ride, predictable.  Perhaps the Spearfish suspension could have been dialed more expertly for her weight; the narrower 2.2″ tires felt skittish on dry desert trails.  The Krampus has a sure footing, without a lead foot. 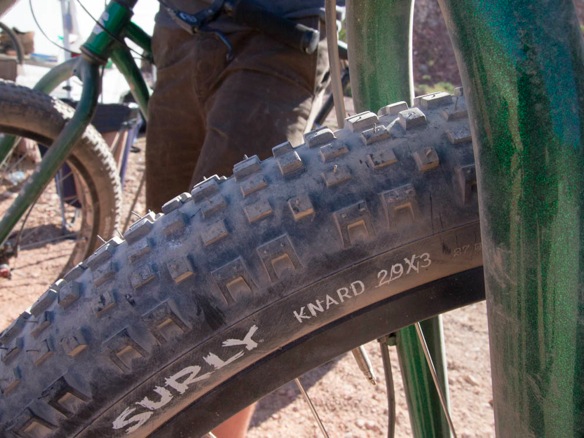 Chain clearance is good, with room for a double up front.

The Knard tires, made by Innova, have an all-purpose fast rolling tread.  Coming from standard width tires they offer tons of grip on the trail, but it took me a moment to get used to “skinnies”.  I may have a hard time leaving fat tires behind as my “fat year” comes to a close. 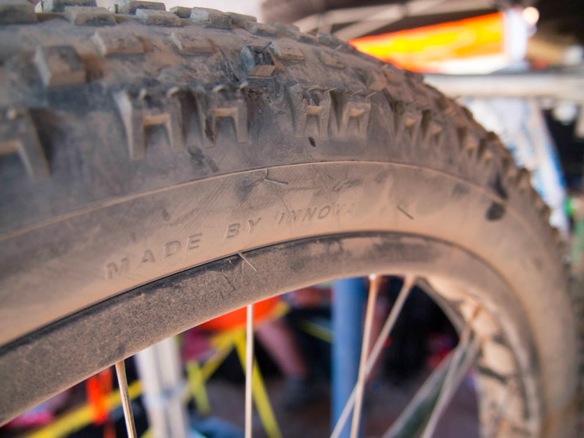 A non-endorsable suspension fork and Knard combination of an employee-owned Krampus.  Non-endorsable means some sandpaper was involved and you can do it at your own risk. Don’t contact them for the details.

WTB shows a redesigned Weirwolf for 29″ tires.  This 2.3″ model is voluminous and grips all the way through turns in a variety of conditions.  This is an awesome looking tire with some purposeful design features.  Note the terraced side knobs. 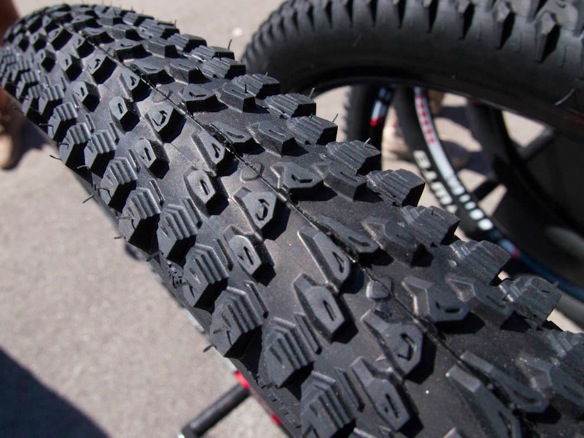 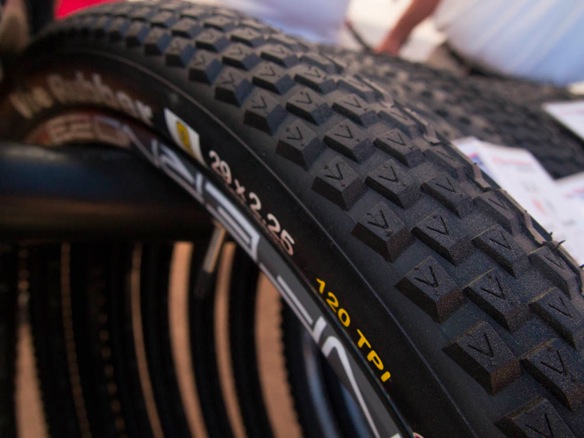 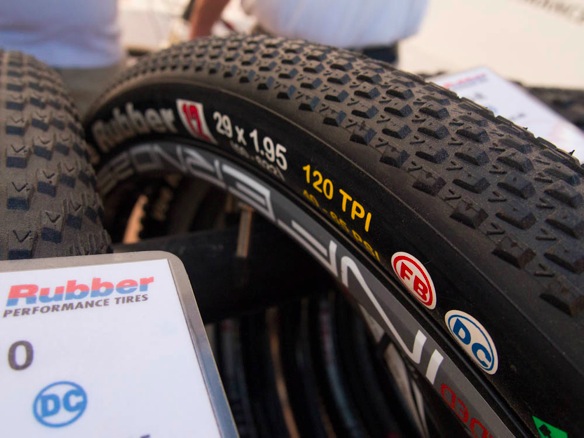 Soaking up the sunshine and glitz for a few days in Vegas.  Wandering the halls of Interbike, I will have my eyes open for: big rubber, lightweight touring gear and luggage, dynamo lighting and accessories, comfortable handlebars, and oddities.  Should I look for anything in particular?

Gainfully unemployed, I had plenty of time this morning to hunt Bike to Work Day feed stations.  One popular station on the Chester Creek Trail was stocked with bacon, courtesy of the Spenard Roadhouse; cinnamon rolls from Great Harvest, and vouchers for a free beer at the Midnight Sun brewery this evening.  Bacon in the morning and beer in the evening and bikes all day.  Bikes every day.  Bike everywhere, every day.

Lael receives her bacon.  Lael saves her bacon for later.  I wrapped my bacon around a cinnamon roll and ate it immediately.

Backpacks, old Rockhoppers and high visibility clothing all made a good showing.  Two matching riders breezed by on a 5 speed Schwinn Twinn on C Street, while a late 80’s Sierra with a 16 inch tall stem took the bus.  A carbon Ridley cross bike with tubular tires shared a resting spot with an old Bridgestone MB-1.  The purple Pugsley with the smooth tires and the “racing” handlebars confused at least two people. 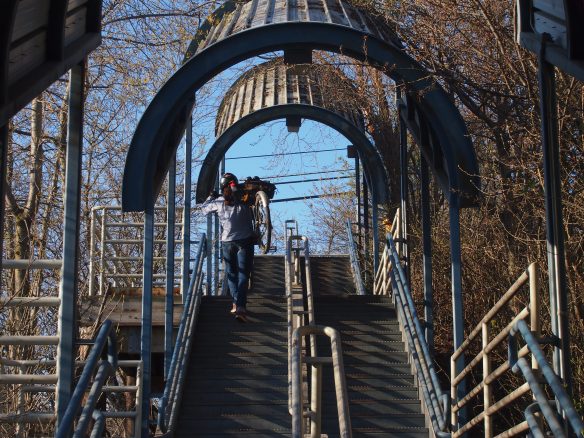 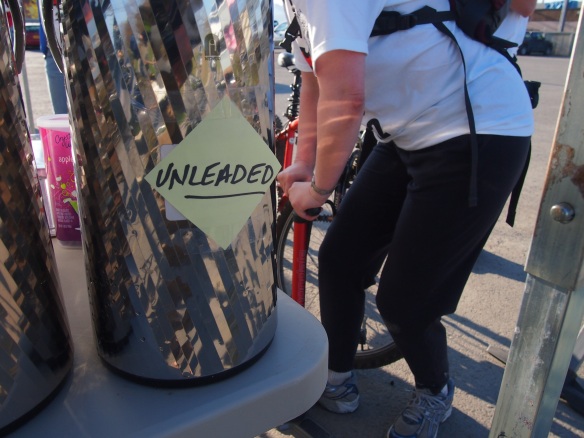