Since landing in Europe, I’ve tended to a few loose ends.  The bikes were fully operable upon landing (and reassembling).  With a few small improvements, they are even better.

Lael has a new 36t Vuelta chainring to replace a 32t ring.  She hopes the bigger gear will allow her a little more speed along paved paths, without compromising her ability to ride in the larger ring most of the time with an 11-32t cassette.  The 22t inner ring is still perfect for mountainous exploits.  The bashguard is just barely undersized for a 36t ring.

Looking for a suitable mounting point for my Supernova E3 Pro headlight, I finally revisited my first idea and drilled the fork crown.  The hole was perfectly sized so that the M6 bolt tapped the hole.  With so much thread engagement, the bolt did not require a nut on the backside.  I considered mounting from the brake bridge, but there is scarcely enough material there to feel confident about drilling a hole.  I also attempted to mount a top cap on the underside of the steerer tube (I drove a star nut inside), but the light arm would have been damaged by the brake bridge under full suspension compression.  I removed the air from the fork to test.  This was the best option, but limited space below the handlebars.  I switched to an XS 6L Sea-to-Summit compression drybag.

Also pictured, a buttery smooth Velo Orange Grand Cru sealed cartridge bearing headset— as a friend recently said, “because I like to know the history of my bearings”.  It is one less thing to think about.  I install cartridge bearings with as much grease as possible, to further resist contamination and corrosion.

I inquired about USB charging from a dynamo hub in Amsterdam’s De Vakantiefietser bicycle shop.  The Busch and Muller USB-Werk AC seemed to be the best option for my needs, acting as a bridge directly to a USB out.  The system does not have a battery, and is only suitable for charging during active cycling.  So far, it seems to charge best with the lights turned off.  Without a battery, the system is very lightweight, excluding the existing hardware (hub, lights, wiring).  With a battery, I could capture all of the power coming out of the hub at all times as light, by directly charging a device, or by storing it in a battery for later.  I paid €99 for the device.

Before leaving town I swapped the SRAM indexed trigger shifters, which performed crisply, for some top-mount thumb shifters.  I am accustomed to thumb shifters on my bikes, and index shifting in general.  Mostly, this decision was made for better cable routing with a drybag strapped to the handlebars.  I found a nice Shimano Deore LX rear derailleur in the parts bin at Two Wheel Drive, although it was missing two pulleys and a back cage plate.  I sourced these parts from a used Deore long cage derailleur missing a fixing bolt.  With some further modification and grease, I had a like new rear derailleur. 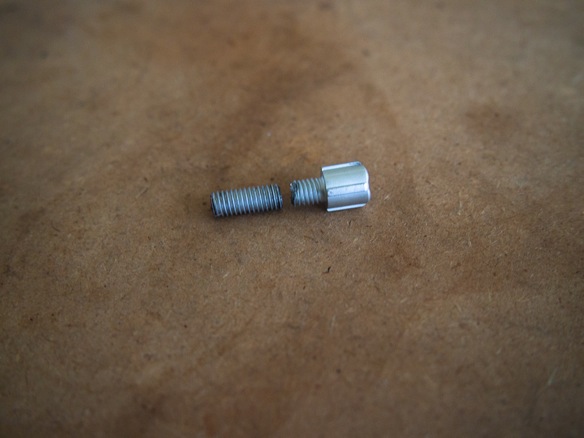 Within a day of cycling, I noticed a broken barrel adjustor on my right shifter, most likely from spending time in a box on the airplane.  I have used these thumb shifter mounts on the Pugsley for nearly a year, without fail.  However, the aluminum adjusting bolt is a weak point.  A host in Rotterdam found a steel replacement in a parts bin.

Repaired.  The replacement steel bolt should be no problem.

Before leaving the country, I picked up a pair of GP1 BioKork Ergon grips at REI in Denver.

A section of old inner tube and some zip ties make a durable chainstay protector.  The rubber also dampens the sound of a slapping chain. 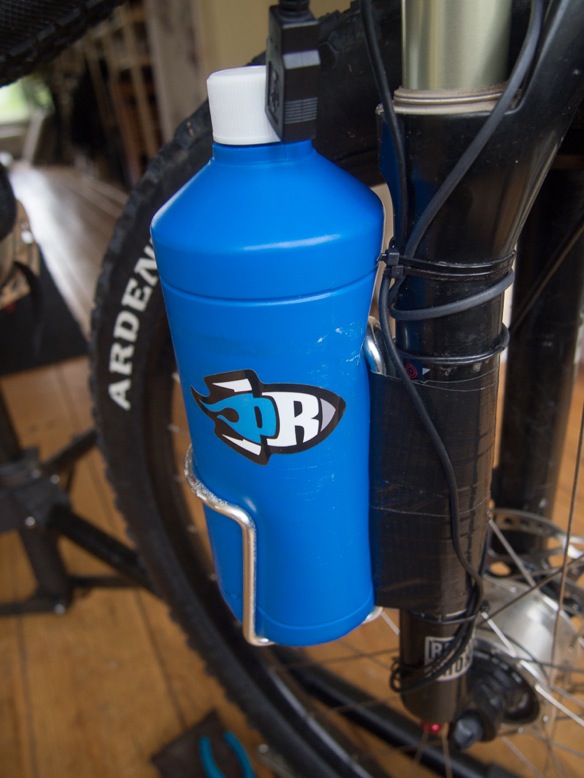 Finally, with the smell of cooking fuel permeating from my framebag, I couldn’t wait to attach some bottle cages to the fork.  In search of hose clamps, I encountered this solution.  John, our host in Rotterdam suggested I attach a standard bottle cage with a durable adhesive tape such as electrical or duct tape.  The solution is simple, lightweight, and presumably durable.  He claims to have done this on a Santa Cruz Nomad, eventually breaking the bottle before the tape ever failed.  The result is also more attractive than hose clamps.  Perhaps more aerodynamic as well?  Cleaning alcohol in high concentration is commonly available in the Netherlands as Spiritus for about €1 per liter..  Without the label and with the addition of a Porcelain Rocket decal, I now refer to it as ‘rocket fuel’.  Now, to tame those wires…

A bit rainy and blustery along the Maas river near Rotterdam.  We might take some short days this week to wait out the rain.  Out looking for the GR5, and dodging rainshowers.

The rim and tires came in the mail from Surly and the hub was sourced from The Garage in Helena, MT; the spokes were cut at the Summit Bike Shop in Bozeman and a truing stand was arranged via Craigslist.  FreeSpoke provides the spoke length calculation and the graphic assurance that I have put all my pluses and minuses in the right place.

FreeSpoke is my preferred spoke calculator.  The graphic description helps ensure you’ve input all the proper dimensions, especially when offset hubs and rims are involved such as with the Pugsley.  The above calculation is for a Surly Marge Lite rim built to a Shimano FH-M475 rear hub, for Surly Pugsley.  The dimensions of the Deore and XT high-flange models appear to be the same as the M475.

For this build I used 262mm spokes all around.  Some Rock-n-Roll Nipple Cream was applied to the threads, while the spoke holes and nipples were generously greased to prevent corrosion in use and to reduce friction during tensioning.  This is the first time I’ve used a commercial spoke prep. Linseed oil is messy, and does too little to minimize friction and wind-up during tensioning in my experience.  The Rock-N-Roll prep is less messy than linseed oil and was easier to work with during the build.  I’ve had success building wheels with standard bearing grease, and wouldn’t hesitate to do it again.  With proper spoke tension, I’ve never had any spokes loosen in use.

In a day, I sourced all the necessary parts, laced the spokes, tensioned and dished the wheel, and installed a new pair of lightweight Surly Larry 120tpi tires.  In a day, the metamorphosis is complete– my wheels are lighter, yet more voluminous than they were yesterday. 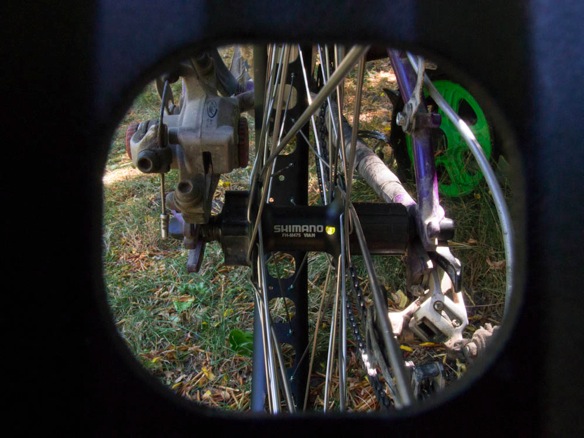 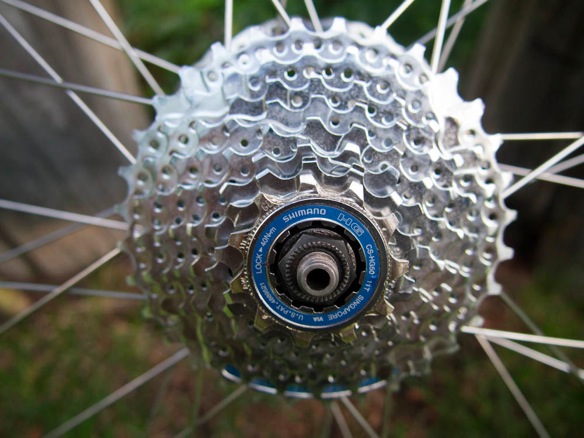 My rear Schwalbe Big Apple developed a slow leak in the last two days of use, and a shred of steel was found when the tire change took place.  Technically, I managed to ride from Anchorage, AK to Bozeman, MT without a flat, a distance of over 3200 miles.  To dish the new wheel properly, I installed it in the frame several times and used my fingers to estimate the distance from the chain stays.  About 2000 miles since Whitehorse, my second chain on this cassette is worn.  The time has come to return to 8 speed equipment, easier shifting and cheaper parts.  Check the manufacture date on the Marge Lite rim– it’s Cinqo de Mayo.