I spent a full summer in Anchorage, Alaska, working.  Returning from Israel in May I arrived at The Bicycle Shop the next morning to build Lael’s Tour Divide bike.  I started work the next day, rode Lael out of town at the end of the week and then worked every single day until she returned from her ride from Alaska to Antelope Wells, about 50 days later.  Lael spent less than three weeks in town before turning back south toward Bellingham, Banff, and Antelope Wells for her second Divide ride of the summer, the LW ITT.  I worked during most of that ride as well, finally earning a few days away from work as the season slowed.

Less than a month before planing to leave Anchorage for the season, I flew down to New Mexico to meet Lael at the finish of the Divide, at the border of Mexico.  It was nearly– not entirely– a surprise.

We both returned to Anchorage so that I could finish work for the season.  We sold her race bike, tidied up our affairs, and packed our bags for Interbike and adventure.  I gave the Krampus away to a friend.  Lael is riding a 2×8 drivetrain and platform pedals again, on a rusty bike with a half-dead Reba.  Still she claims it is “a good bike”.  We’ll spend the week in Vegas at Interbike with Revelate Designs, spreading our love for bicycle based adventure.  Thereafter, we plan to pack our bikes and ride into Arizona.  Ok, we might try to hitch a ride after Interbike to St. George, UT.  Anyone from Interbike headed back that way this weekend?  To SLC, Denver, etc.?

Aside from work– and I could write volumes about working in a busy bike shop in Midtown Anchorage– Alaskan summers aren’t bad, even if I didn’t always make the most of the long days and dry trails. 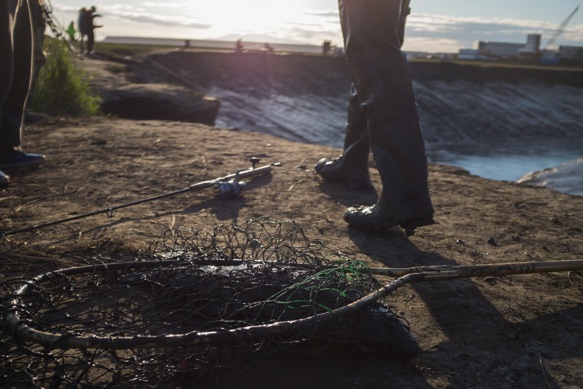 Riding along the Ship Creek slough during salmon season.

Life at the bike shop included lots of late night personal projects, including Lael’s two Divide bike edits, and this custom wheelset for Joe Cruz’s Surly Pugsley, which travelled to Norway this summer for a backcountry ramble.  He finally gave up the fight and moved from doublewall DH Large Marge rims to these feathery polished Marge Light rims.  Thanks to Fatbikes.com for providing the polished Surly rims and lightweight front hub.  I finished the build with butted DT Swiss spokes, gold alloy nipples, and a cheap sealed cartridge bearing Redline hub.  I failed the total lightweight build when I couldn’t find any high-quality 32h hubs in Anchorage, given our short time-frame for the build. 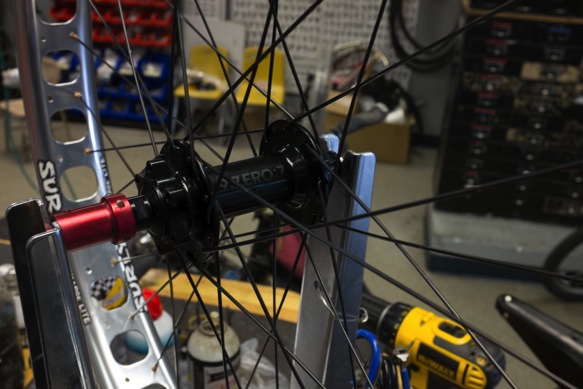 Also from The Bicycle Shop, the analog Tour Divide Trackleaders page, exclusively dedicated to following the LW and LW ITT dots and promoting water cooler discussion about ultra-endurance racing.  This Michelin map of the American West provides a surprising amount of detail.

Strawberries, not nearly as common as raspberries, blueberries, and rhubarb, abundant while we house-sat for Dan Bailey.

I also hosted two cyclists during the summer, this rider from Japan and another rider from France.  I do my best to help some of the hundreds of touring cyclists who pass through Anchorage in a summer.  Recently, I enjoyed the company of Adela and Kris, two Polish riders slowly making their ways round the world.  Check out their travels at biketheworld.pl.

Salmon, even more common than berries in the summer.

Working in a bike shops keeps me close to the “industry” for a minute, as a wave of mid-fat bikes arrive to market.  This Trek Stache+ and the Specialized Stumpjumper 6Fattie FSR are widely lauded, and look like a fun and useful extension of fatbikes.  As fatbike sales eventually stagnate, we will continue to see the influence of large volume rubber elsewhere in the industry.

Long nights leave ample opportunity to play in the city.  This beach is accessed from the end of the paved Coastal Trail at Kincaid Park, or by connecting a series of singletrack mountain bike trails.  This beach is often rideable through the winter.

Salmon over the fire.

Bike rides of various kinds filled my summer, although I only left Anchorage city limits twice.

Riding to check in with Nate and the family.  It is always cool to see the evolution of his family bike circus.  Elin is riding a Yepp seat on the Big Dummy.

Her Revelate Designs Feedbag is stocked with Cheerios.

Riding with Tamra, Lael’s local adventuring partner, and James, Lael’s brother.  They each bought their first mountain bikes this summer.  Bright colors are popular in the industry right now.

Riding to rub shoulders with the after-hours crowd at Speedway Cycles, home of the Fatback.  Greg Matyas is good at keeping the shop stocked with beer.  Greg bought a special bottle to celebrate Lael’s first Divide ride.

And riding until finally, after midnight, the sun sets in the north.

On a whim, I bought a plane ticket to Tucson to meet Lael at the finish of her second Divide ride.  I spent the weekend with friends, Lucas and Monica, who recently moved away from Anchorage.

Lucas had just received a Lenz Mammoth, one of several 29+ full-suspension bikes made by Devin Lenz for Mike Curiak.  Two models have been dubbed the Fatmoth and the Fatillac.

We spent the day building the bike and following Lael’s SPOT tracker through the Gila, anticipating storms and her late night passage through town.  While we went riding in the evening on the new bike. a severe thunderstorm rolled in, dropping just less than 3 inches of rain at the Silver City airport.  Only later did I learn that Lael hardly got wet, although there were many signs of flash flooding. 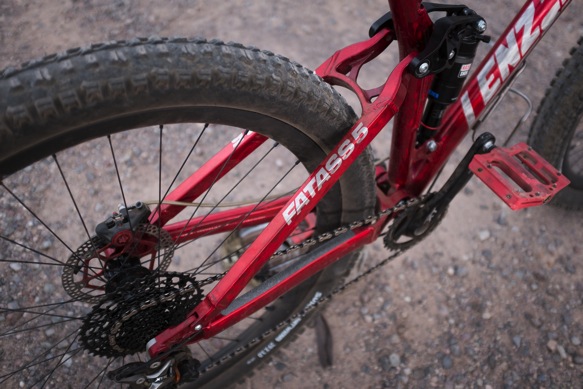 Gomez Peak Trail System, looking north into the Gila and into a night of thunderstorms. 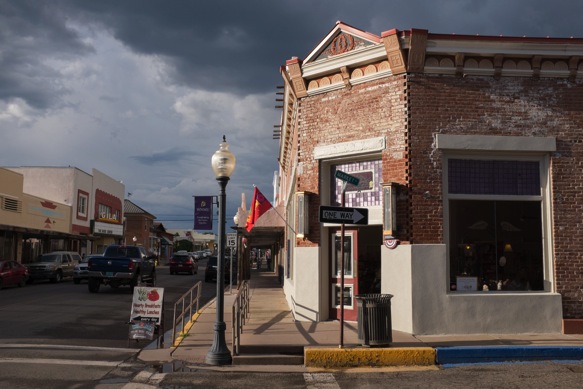 Lucas leads the way around town.  Gotta love a town with a proper main street, this one called Bullard St. 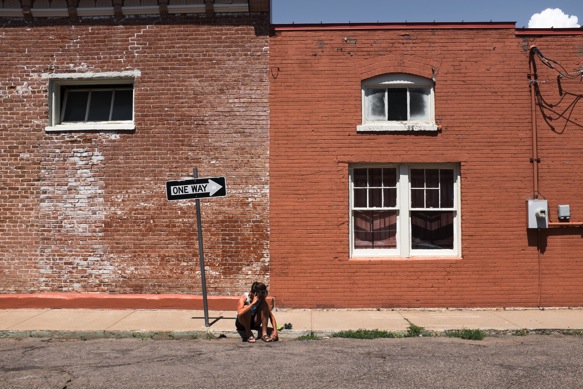 Local music, including friends Tim and Chloe, formerly of the Bike Haus in Silver City, also one-time residents of Albuquerque when we lived there a few years ago. 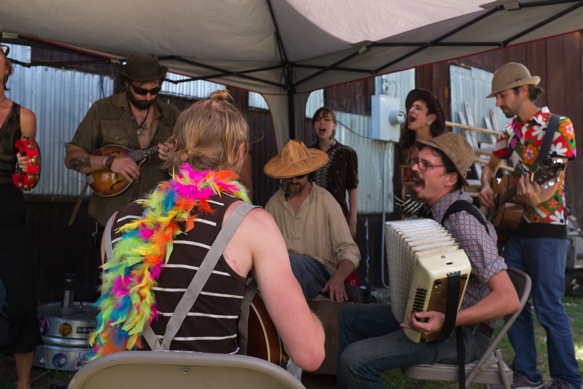 The Bike Haus is locally famous as an informal guesthouse and cultural center for cyclists.  Jamie, who owns the house, rents rooms to a rotating cast of interesting people and on occasion, touring cyclists are invited to stay.  The property is full of bikes and puppets; a Seussian garden encircles the house.  I stayed here back in 2011 on my first ride down the Divide. 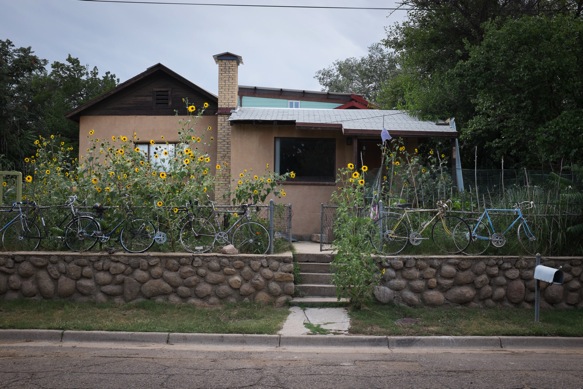 I welded a welcome sign at the local Bike Works community bike shop back in 2011, which still hangs from the porch.  That was my first time ever using such a machine, some kind of wire-feed welder.

I drove down to Antelope Wells to catch Lael at the finish, arriving a few hours early.  I passed her on the final paved stretch to the border. 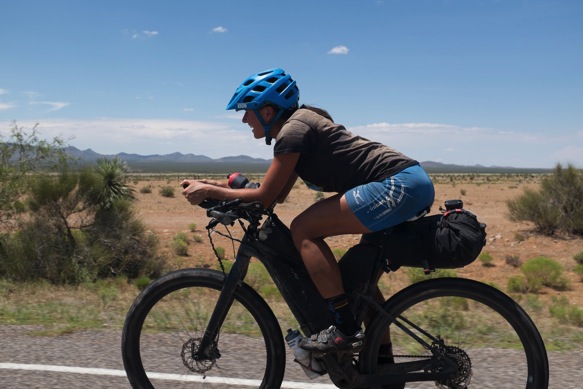 Waiting at the end, at the least used border crossing between the US and Mexico. 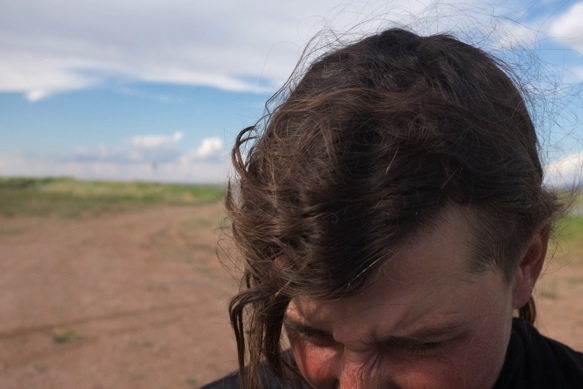 Back in Anchorage we prepare for our next micro-adventure, a trip to Las Vegas for Interbike and a ride on the Arizona Trail.  While Texas was the intended target after the Divide, it was cheaper for Lael to return to Anchorage for a few weeks than to kick around the SW, especially as we intended to go to Interbike.  The Texas situation is somewhat tenuous, thinking about Tucson for the winter.

Oh, and carbon frames don’t resist abrasion very well.  Steel and titanium win this division, followed by aluminum.  Carbon comes in last.  But the ride is nice, and light.

That is a pinky-sized hole in the seatstay of Lael’s Stumpjummper.  I suspect she rode it that way from Lime, MT to the finish.

The chainstay has much more material and for some reason, also features more generous tire clearance than the seatstay.  The frame has been replaced, the complete bike sold to some awesome folks in Anchorage.  Mary walked away with a 22lb gravel shredder, complete with custom framebag and dynamo lighting system.

Mary, the woman who bought the bike, lived in Crested Butte, CO from the mid-’80s to the mid-’90s, and told stories of housing some of the great names in mountain biking on her couch or floor.  Wes Willams of Willets fame– strapped for cash– once paid his rent in the form of a custom titanium frame.  She claims that was frame #3.  Mary painted that frame with flowers.

This is a familiar task, building bikes and riding away from the airport.  Conveniently this airport is in the middle of the city, although I only packed a pile of bike parts.  My new custom Meriwether frame was shipped to Las Vegas.

To prepare for the show, Eric asked that we make custom Revelate t-shirts.  Lael rebranded her two cotton race jerseys from this past year.  The Alaska Grown tee was a gift from her grandmother, and accompanied her on her second Divide ride.  The Keeping It Real shirt was purchased at a t-shirt shop in Israel and is now locally famous for crushing the HLC route across that country. 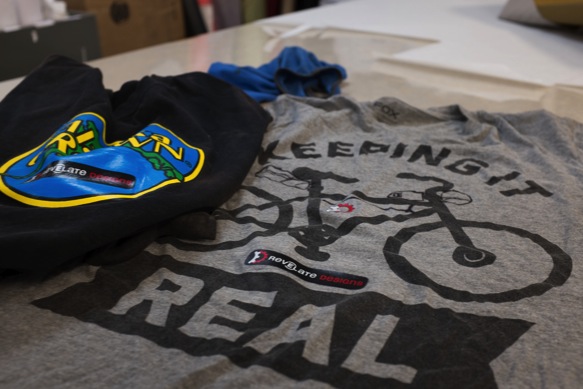 Set up for the show.  Friday is the last day of Interbike.  We will be at the Revelate Designs booth 21186 for most of the day.  Otherwise, we’ll be walking around the show jamming our pockets full of tubeless sealant and nutrition bars.

In an exciting twist, it sounds like Skyler and Panthea will be meeting us this weekend for an extended AZ jaunt.  We’ll all going in the same direction at the same, although we’ve never met and we don’t have any real travel plans.  With little more than a few Facebook messages, we’ll roll out of Vegas this weekend, headed for southern Utah and the northern terminus of the AZT.  The new pink frame is going to get a workout.  Back on the road in 3, 2, 1… 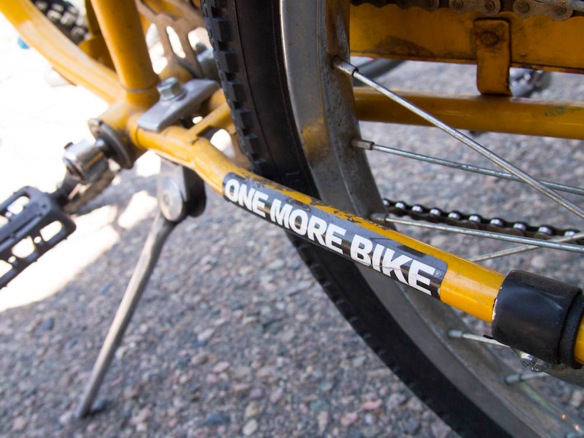 I’m seeking a ride for two people and two bikes to arrive in Las Vegas sometime around Septempber 16-18 to attend the Interbike show, a bicycle industry convention. I’ve been bicycle touring most of the summer from Anchorage, Alaska and will be riding the Colorado Trail in the next few weeks. I can detour from the trail to meet in a nearby city or somewhere along the I-70 corridor (Glenwood Springs, for instance). Anyone from the Denver area headed west mid-Sept? Any help would be welcomed. I expect to share the cost of gas. Thanks.

Tell your friends, especially those that enjoy gambling or bicycle industry conventions.