Greg, a cousin of a bike friend from Anchorage, AK intercepted Lael at the top of Marshall Pass yesterday morning.  They’ve only met once, so when Lael saw him she said “Hey, I recognize you.”  He tried to give her sandwiches, which she declined.  Greg reports, “she looks good/strong, but sounds horrible with a lingering cough”.  Photo via Nathan Bosch.

Arriving in Poncha Springs later than the boys, Lael stopped at a corner store for food and camped across the street under a tree.  She was on the bike by 4:30AM, pedaling the 3400ft up Marshall Pass at a brisk pace, alone, ahead of the others.  For the rest of the day, she fought off the group at her heels, gained some distance while riding, lost some of that distance in the final miles to Del Norte, but still arrived about a half hour ahead.  She stopped in Del Norte for about a half hour and pressed on up Indiana Pass, one of the single greatest climbs on the Divide.  The top of the pass also marks the high point on the route at 11,920ft.  The other riders stayed in Del Norte.

Lael called while riding the bike path out of town.  She still has a lingering cough, although she reports no respiratory distress.  When I rattled off questions about her physical condition– butt, knees, Achilles, hands?– she admitted her knees felt a little creaky in the early morning, that’s it.  As far as I know, she has not slept indoors or showered since Banff.  She’ll be due for a long hot soak in a few days.  The border is less than 700 miles away.  She rode 176 miles yesterday over Marshall Pass, Cochetopa Pass, Carnero Pass, and then about half of Indiana Pass before laying down to sleep.  She will cross into New Mexico this morning and may reach as far as El Rito or Abiquiu tonight.

The lead group has splintered.  Alex Harris is riding well behind the other riders now.  Dylan Taylor has ridden through the night to put down some miles.  Josh Kato, who caught the two leaders in Abiqui, has made chase and stayed close.  That is, until Jay and Neil each arrived near Grants last night, and each of them rolled out with just over 3 hours of sleep.  This is the race to the finish.

Jay rolled out a few minutes ahead of Neil and has been hammering the pedals, opening a 16mi gap going into Pie Town.  Neil is riding strong, and is chased by Josh Kato 23 miles back.  Dylan is 54 miles behind Josh.  The race for the record is between the top three, although gaining 39 miles on Jay in the last 200 miles won’t be easy for Josh.  In fact, staying in the lead won’t be easy.  Riding long days, repeatedly, is a challenge for all of the riders.  But to finish a long battle with a gloves-off boxing match to the finish is going to hurt.

Seb Dunne, the sixth component of the lead group of men, has walked and hitched back to the San Luis Valley of Colorado, and is searching for a new fork between Alamosa and Del Norte.  His current fork, damaged beyond repair, has a tapered steerer and accepts a 9mm QR.  I chatted with him this morning and it sounds like framebuilder Andy Peirce might have a workable solution for him in a used Salsa fork (which has a straight steerer, so would require another headset) .  He also mentioned ordering a Whisky carbon fork from QBP via expedited shipping, which is available for 15mm thru-axle only (he may have an SP/Exposure hub with an adaptor).  Alternatively, Del Norte is only 80 miles from Salida, which may present a solution.  BTI is located in Santa Fe, NM and may be able to ship quickly.  His fork folded at the crown.  Thankfully, he was uninjured.

Seb hopes to get back on the route as soon as possible to continue his ride, even if at a “touring pace”.  However, it sounded like he would be happy to get back on route and hammer a few long days to the finish to post a strong time.  If so, he and Lael may cross paths.  Can Seb and Lael hunt down Alex Harris to collect the $1M prize from The Munga?  The South African Divide-style race, which was first scheduled in December 2014, promised a $1M prize purse built from $10,000 entry fees and corporate sponsorship.  Failure to procure sponsorship and budget the event forced organizers to cancel The Munga.  The website for the event describes the proposed 1000km race along a marked course across the interior of South Africa as “The Toughest Race on Earth”.  It further states, “Being tough is not a right or a privilege.  It is a choice”.  The history of racing along the Great Divide Route is about 15 years old.  Entry to the event has always been free.  There are no prizes.

Both the men’s and women’s records are set to fall this year, set at 15:16:04 and 19:03:35, respectively.  Jay is riding about 230 miles ahead of his record pace from 2012, with four others ahead of the historical data for that ride.  Lael is about 140 miles ahead of Eszter’s pace from 2012, and if Bethany Dunne can put in a strong ride through New Mexico she may also improve upon the current record.  Eszter Horanyi, the most decorated female bikepacker ever (by a long shot), has written a thoughtful post on her blog Zen on Dirt titled Watching Tour Divide Records Fall.    Elsewhere she writes, “If there’s someone who’s going to take my record down, there is absolutely no one else in the world who I’d rather it be than [Lael]“.  Thanks for being awesome Eszter!  A record 18 women started the Tour Divide 2015. 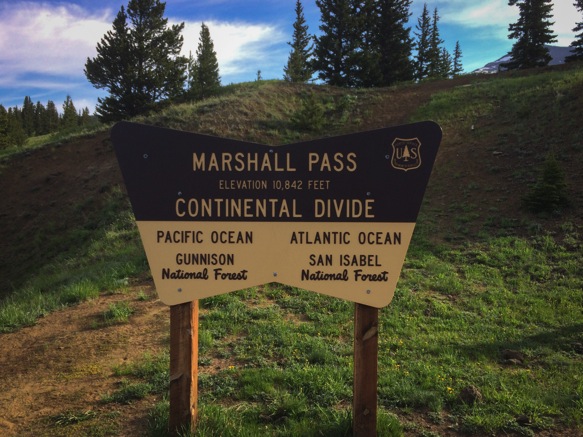