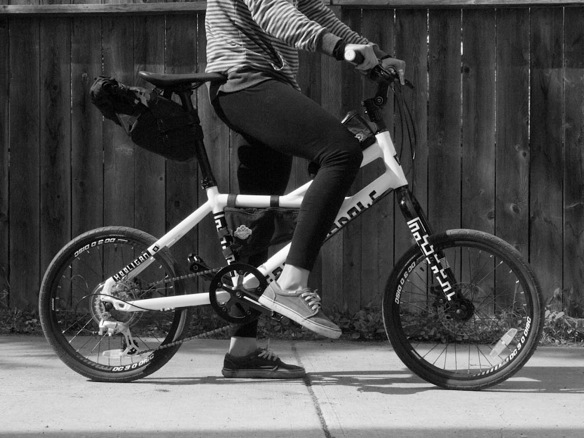 A week before leaving for Europe, Lael picked up a Cannondale Hooligan 8.  It was a sweet deal and helps that she doesn’t have to borrow bikes in England and Corsica where she is studying and traveling.  The Hooligan is being used for commuting around town this month; next month, it will be touring France and Corsica.  In these few months it’ll find itself on three flights, two ferries, and a handful of trains.  Carving city streets and cruising canal trails are some of what it does best– and whatever else a hooligan on a 20″ wheedled bike can find.

Taken at 3:30 AM the night before her flight, Lael, Greg and I fit the Hooligan into a packable drawstring sack for airline travel.  WIth a few other camping items strategically packed to protect disc rotors and derailleur, it looked a bit like a cello or a bass guitar.  Cables and brakes all remained connected even though the fork was removed; tape and string it all together, then pack it away.  The large cotton sack is intended for moose quarters and I’d have liked a similar bag in nylon so that it would be more packable, but the cotton was all I could find the day before the flight.   Remember Greg from Colorado and New Mexico on the Great Divide last fall?  He’s leading bike trips for Backroads in Alaska this summer and our time in Anchorage overlapped for less than twelve hours.   About thirty pounds: the Hooligan, Revelate and Inertia Designs frame bags, a homemade groundcloth, and Western Mountaineering Summerlite sleeping bag and Hot Sack VBL/bivy make a manageable bundle at the airport and on the road– unencumbered summer travel. 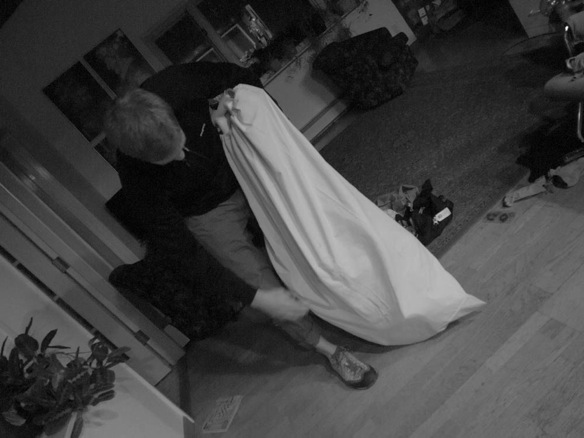