It is HLC season in Israel.

Nowhere else have we engaged the local bikepacking community as in Israel.  America is a big country and there are many riders, but there are miles and miles of trail for each rider to hide.  South Africa is a big country which claims a lot of riders, but most mountain biking seems to happen behind closed doors on private land tracts, only on the day of a race or scheduled ride.  Israel is a small country with a lot of people and a lot of public trails.  The people are active, organized, and committed.  Self-supported bikepacking is rapidly growing out of a foundation of mountain biking and hiking.

We receive the details of a plan on our small yellow phone to meet Ilan Rubinstein at Mitzpe Yeriho at 1800 hours.  We will sleep within the confines of the community, a Jewish settlement on a hill above the city of Yeriho (Jericho) in the West Bank.  We ride at 0600 hours.  Active, organized, committed.

We were first invited to participate in the HLC race last fall, via the blog.  By the time we crossed the border from Egypt I had received invitations for accommodation or conversation over coffee in places further north.  Facebook friend requests flood from serious looking riders, their names masked by Hebrew characters which I still cannot read.  We meet on the trail, partly by coincidence, and they know all about us.  I don’t usually recognize them by name, but we are friends.

The 1400km HLC was organized by a core group of riders in less than a year, and the first race took place in April 2014 from the southern flank of the tallest mountain in Israel, Mt. Hermon, situated at the junction with Lebanon and Syria.  Zohar Kantor, a Tour Divide veteran, conceived the event.  Limor Shany traced a line across the country from north to south, an extension of the week-long supported mountain bike tours he has been operating for years.  Ilan Tevet is the ever-convincing marketing man with a Swiss Army knife of skills to facilitate and promote the event.  He was the one to invite us to Israel and to the HLC last October.

Last year, the weather was hot in April, with two substantial heat waves during the HLC.  April is a month tightly sandwiched between cool wet winter and oppressively hot summers– the weather can go either way, but is most likely to be hot and dry.  The north of the country features a typical Mediterranean climate with wetter winters, while the south is consistently dry most of the year.  In almost any part of the country, substantial rain results in unrideable trails.  Limestone soils quickly clog tires and irregularly shaped limestone fragments– their exterior surface slickened by moisture– are hazardous when wet.  I’ve heard the complaints from last year’s heat, but Lael and I have spent enough time traveling this country during the rains to know which is worse.

The culture of the HLC isn’t entirely new, except for the essential details of being a week long self-supported race across Israel.  Israelis love mountain biking and regularly ride in groups, scheduled one day a week or more.  We’ve met many groups of riders who have been together for as much as a decade.  Ilan Tevet’s group rides very early on Tuesday morning and gathers for a stomach full of hummus at 8AM, before parting ways for their respective professional lives.  Some groups employ a more advanced rider to aid skill building and as a guide.  And the bikes!– we’ve seen more high-end bikes in Israel than anywhere in the world.  Spotting an Ibis, Turner, or Santa Cruz in the wild in America is uncommon, except in high-octane wealthy mountain towns like Crested Butte or Moab, or attached to riders with supreme skill.  Even in the middle of a suburban forest in Israel these bikes are not uncommon, and their association with skill is seemingly at random.  The impact of global marketing has also pressed enduro and all-mountain trends into the Israeli mountain bike culture.  Knee pads and other armor are common.  At the same time, lycra kit mated to Epics and Scalpels and Superflys are all part of the scene.  A few rigid singlespeeders keep it honest.  And on Shabbat, we ride.  Check out the Ben Shemen forest on Shabbat.  Only Marin comes close in my experience.

Bikepacking is growing thanks to the HLC and to the popularity of overseas events like the Tour Divide.  Bikepacking for fun, or mountain bike touring, seems to be missing from the current patchwork of Israeli mountain bike culture, to the point that when we describe to some riders that we are touring the HLC route, they are confused about how this is possible.  American riders often make the same mistake, failing to differentiate touring the Great Divide Mountain Bike Route from racing the Tour Divide.

Coming from Jerusalem to Mitzpe Yeriho, we descend 2000ft on paved highways toward the Dead Sea.  We are the first to arrive and take a place at the picnic table outside the small grocery in the community.  Like many small planned communities in Israel, there is a gate surrounding the property and a structural steel gate at the entrance, often kept open during daytime hours.  But this is the West Bank, and even if only in my imagination, it is different here.  The shacks of sheepherding families line the roadside from Jerusalem.  But when we enter Mitzpe Yeriho, we could be in any other community in Israel, from the Negev to Galilee.

Ilan Rubinstein arrives first from Eilat, and quickly unveils a third of a bottle of Johnny Walker.  We’re sitting in front of half-empty pints of Tuborg Red and a tub of hummus, one half of our now-typical dinner.  Ilan serenades us with stories about the “spirit of the trail” and about the life-changing experience of racing the HLC.  It is inspiring stuff and Ilan is one of the greatest students and most sage instructors of the method.  But Ilan scratched from the HLC last year after a monstrous effort to Jerusalem.  The details of the end of his race are never made clear to us.  Despite countless queries, he avoids answering by chasing tangential trail philosophies.  He did the same thing last time we met him on the beach in Eilat.  There is something out there for him yet.  He arrives on a Specialized Epic with a combination of Revelate and Nuclear Sunrise gear.

Omri arrives next, a much younger man on a smartly packed Cannondale Scalpel with Porcelain Rocket gear.  He scratched even sooner in the race last year, but is quick to admit his mistake, with a smile.  The HLC is not like a short-source XC race, where he excels and where he draws much of his experience.  You cannot ride the same way, at the same intensity.  He recently spent several months in Ecuador touring Andean backroads, shadowing some of the routes he’d seen on Cass’ blog While Out Riding.

Nir deboards the same bus as Omri, a relative novice mountain biker (in time, not skills, since starting to ride three years ago) and a first time HLC racer.  He rides a singlespeed Kona Unit packed with Revelate Gear.  Nir is comfortable telling Ilan when he is overthinking, which amuses us greatly.

We’re just along for the ride.

Awake before dawn, above Jericho and the Dead Sea.  How else could you convince men to wear tights and sleep on plastic house wrapping on the ground in a park?

Leaving Mitzpe Yeriho, we pass several small homes with large flocks of sheep and goats.  These poor Arab families are increasingly a minority in Area C of the West Bank as Israeli settlements grow at an extraordinary rate.

A climb ending in a steep hike downhill sets the tone for the day.

Searching for trails etched by sheep and camels over decades and centuries.

Unlike many of the official hiking and cycling trails and 4×4 routes we have been riding, this trail likely predates the state of Israel by many years.

A nearby mountain bike route called The Sugar Trail passes from the hills above Jerusslem to the Dead Sea, once a popular trade route now a popular shuttle run.

Singlespeed and happy, Nir keep an even keel and an even cadence.  The sign on the front of his bike indicates that he is riding the HLC to raise money and create awareness for Asperger’s syndrome.

There are a series of wells along the first part of our ride, which makes carrying 7L of water feel a little silly.

The Judaean Desert is never this green, locals say. 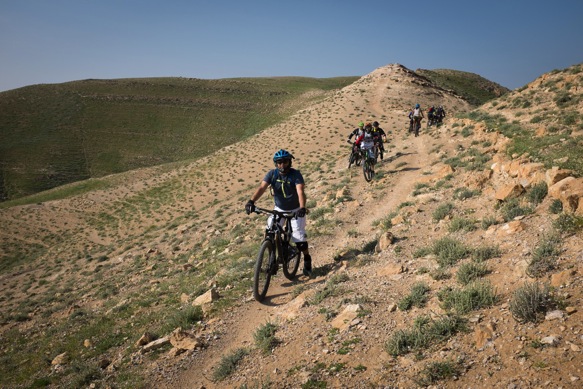 Continuing to the south, the desert becomes increasingly green. 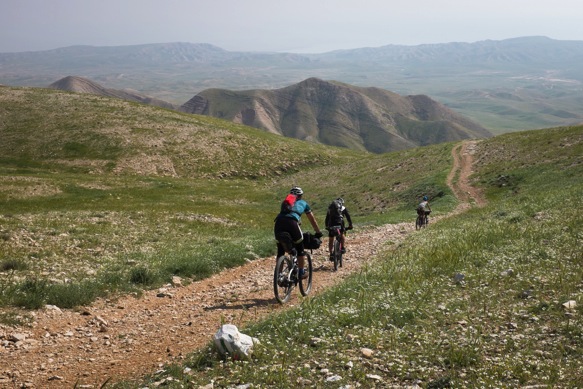 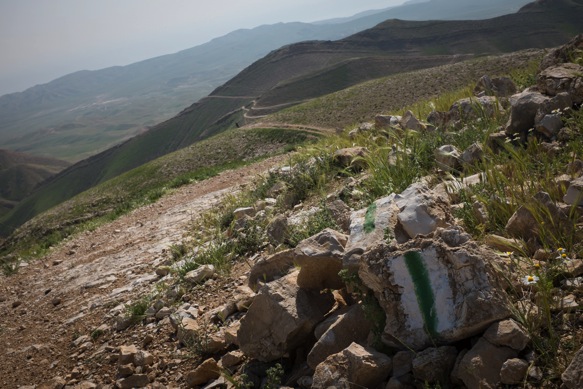 Short steep hikes punctuate much of the first part of the ride.  Following GPS tracks up and down steep hillsides within sight of rideable trails is amusing, but the resultant ride is absolutely worth it, making connections one would not have seen from afar or from available basemaps.  The combination of local intel and a GPS are irreplaceable.

A donkey would be a better tool than a bike up here.  Sage is in season, easily identifiable by smell from several meters away. 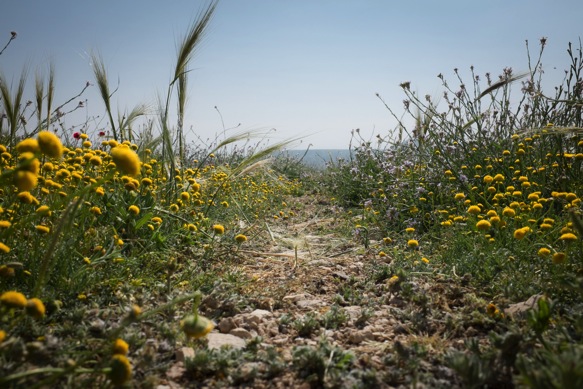 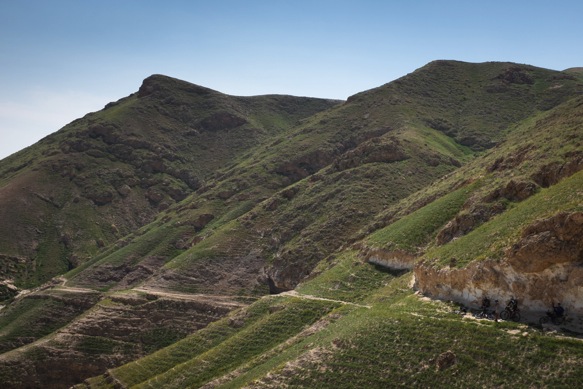 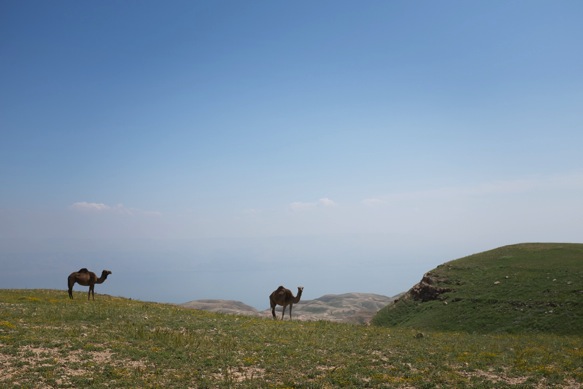 Some flow, some chunk, some hiking, and some technical descents if you choose to ride them– HLC training. 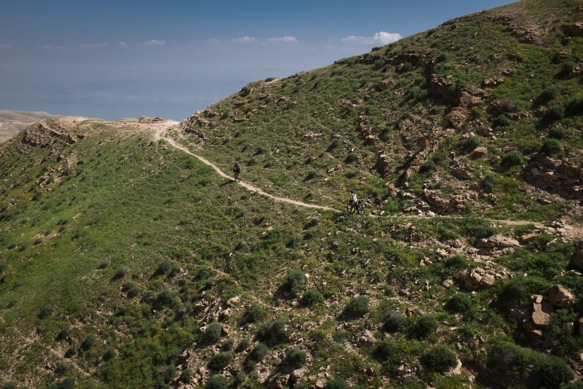 Ilan, the bikepacking poet from Eilat.  Ilan is well-known to provide hospitality to passing cyclists and has met many riders connecting distant parts of the globe, coming through Israel from Jordan and Egypt.  He has arranged for us to sleep in the aquarium in Eilat on several occasions, where he works as an accountant (with seemingly endless vacation time to go bikepacking). 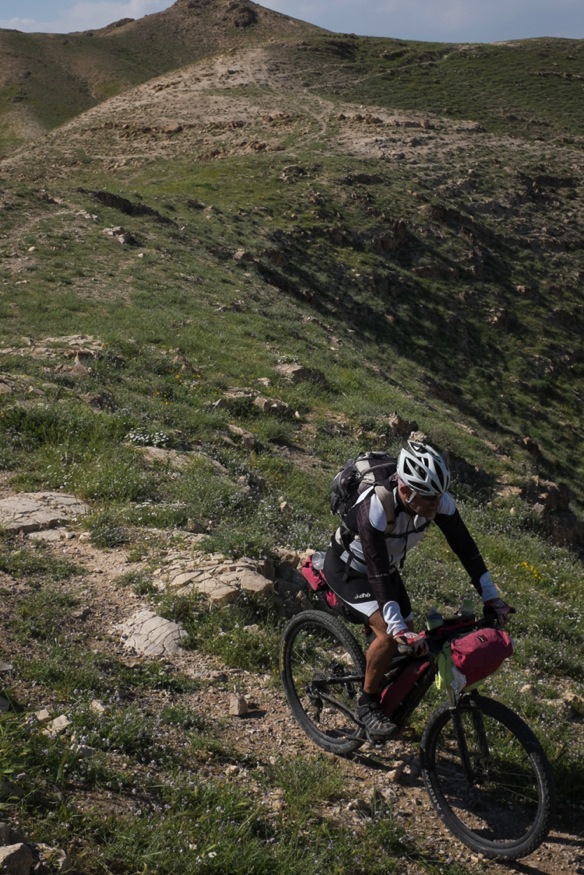 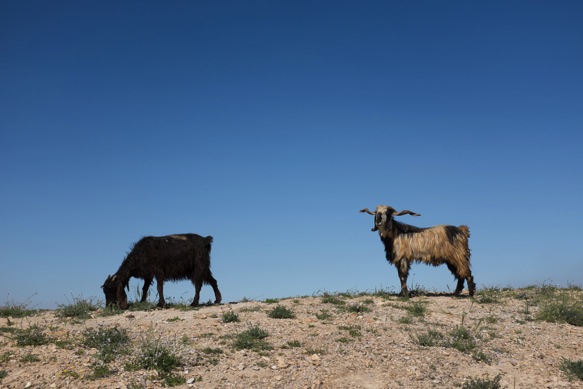 Still over 2000ft above the Dead Sea, Jordan in the distance.

Mostly doubletrack from here to the end of the day.

Morning above the Deas Sea, cool air reminding us that we are here in the right season.  This place is an oven in the summer.

Our track crosses a series of deep wadis which drain to the Dead Sea.  We can ride into these canyons, but not out.  Local Palestinian 4×4 clubs are out enjoying the day, bumping Arabic electro tunes.

The race starts from Mt. Hermon on Thursday morning at 7:00.  Follow along on the HLC 2015 Trackleaders page.

We eventually arrive at an important junction where we can continue toward our planned destination at the Aravah Junction, or ride toward Arad and end the day at a reasonable hour, before dark.  Before the decision is made, minds wander to cold beers and obligations at work the following day.  We finish our crossing of the desert in Arad, where regular bus services take Omri, Ilan, and Nir back to their lives. 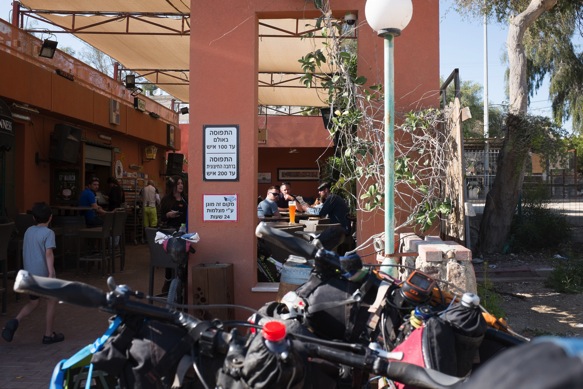 We reconnect with the HLC track in Arad and begin riding north for a second time along this section.  If anyone asks, we live on this off-road artery across Israel, on the HLC.