A videographic celebration of bicycle maintenance.  Don’t wait until the chain squeals to give the bike love; daily affection will do well to maintain the amorous connection between cycle and cyclist.  A soft-bristled brush is like a fine champagne for your bike.

The complete film is a narrative of the 1976 Paris-Roubaix event, full of colorful cycling caps and wool jerseys, Campagnolo Nuovo Record equipment, Eddy Merckx and an aging Raymond Poulidor.  French labor demonstrations interrupt the race at several points; Eddy Merckx obsesses over saddle height; and, “a rare steak is a good breakfast for what lies ahead”. 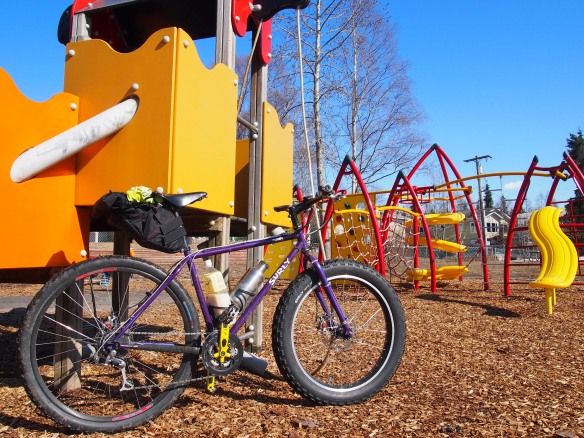 The Pugsley in two acts this summer. Act I: I roll on 29 inch wheels down the AlCan Highway, and the upper half of the Great Divide to Colorado. Act II: I meet Lael and her “snowblind” white Pugsley in Colorado, and we bump along high mountain passes on the Colorado Trail to Durango, through the San Juan Mountains to Grand Junction, the Kokopelli Trail to Moab, and beyond. The AZT might be in the mix as well as some National Park visitation in the southwest.

The Pugsley is in transition at the moment, but I’m really enjoying this half-fat setup. Previously, I thought that a fat front tire was a nice way to modify an existing 29er to maximize it’s abilities and to taste the fatbike nectar. Now, I’m considering leaving mine this way. In the past, I’ve opted to use slightly larger tires in the front before to improve the comfort of the front end, but never this big. It would really soften the ride and would be plush on washboarded dirt roads and trails. Likely, I’ll drop in a 29in wheel and leave town on that, but Ive decided the half-fat ride is no compromise. It’s both fat and fast in the same bike.

Salsa Cowbell 3 bars are on order, as well as a Nitto M-18 (R-18 would work too) rack that will support a Carradice saddle bag. I’ve enjoyed using the Revelate Vischasa seatpack over the last few days, but the Carradice Camper is almost twice as big, and rides better when filled with heavy items.

Summer is winning the race with spring. Goose Lake is still frozen but reflects a lot of sunlight. If you stand with your face to the sun and you back to the painted white guard station, it’s about 80 degrees over there on a sunny spring afternoon. Stripping down to skivvies, but the lake is still frozen. 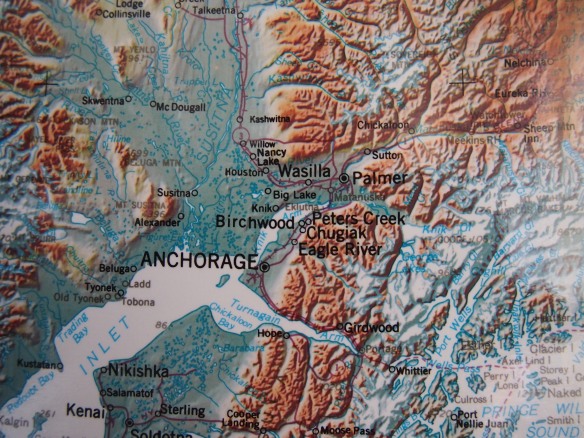 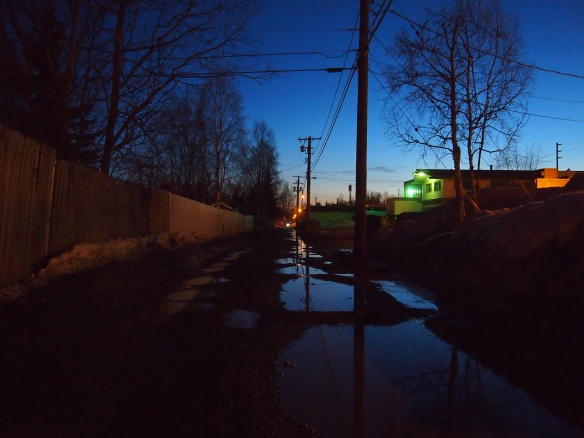 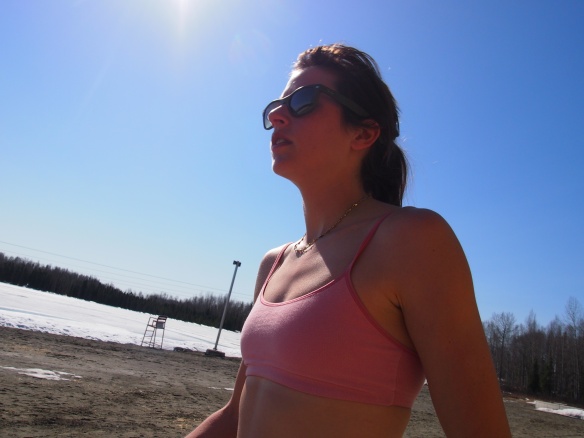 Half-step, granny– 50x46x26– although the package pictures a normal triple. A “touring” crankset from a delightful time when bike trips were popular and mountain bikes were simple and rugged. This crank was likely manufactured by Sugino, although branded by Specialized.

I used an 86 BCD SR Apex triple for several years with 50x45x28 tooth chainrings. More recently, a 110/74 BCD Sugino triple with 46x40x26 is preferred. Mostly, I use these gears as a wide range double, with an additional overdrive ring for descents and fast paved riding.

Two weeks until departure and there is so much to do. Servicing a family of bikes is on the list. A svelte, silver square-taper Specialized crank gets one project rolling. 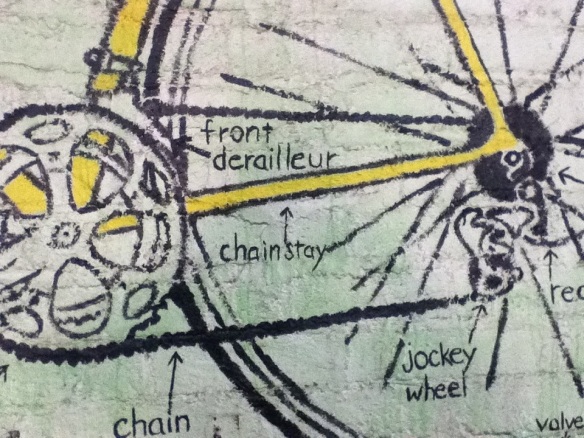 Lael’s an aunt of four months and I’m a sorta uncle, and this guy is the reason I’ve spent my winter in Alaska.  It’s his fault I’ve got a fatbike.  For now, just smiling. 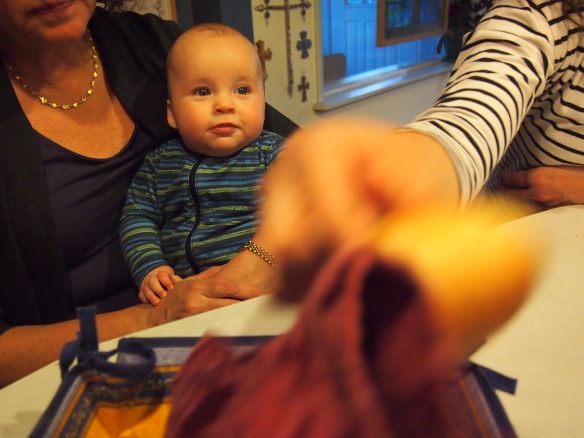 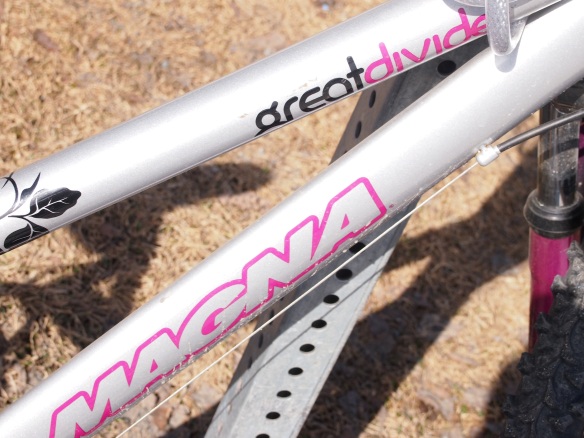 Cracked skin knuckles from washing hands in Dawn and Gojo a dozen times a day, repairing broken axle Mongeese and other sub-bike shop bikes, ridden hard all winter.  Next, assemble a twenty five pound full-suspension twenty niner.  Everyone drools over themselves, picking it up with two fingers by the saddle and handlebars.  “I guess it’s neat”, is my usual response to these kinds of things.  I’ve freed myself from the reigns of Sheldon and Grant and Jobst and Jan, but I’m still not swallowing 25 lb. twentyniners with a single fork stanchion and a proprietary stem with only one aftermarket option.

Not much outside time these days, but plenty to come.  I’ll be warming my face, heading south into the day’s sun.

…I eat food; mostly normal food, and sometimes lots of food. While touring I enjoy a variety of foods from a mundane handful of salted peanuts and a swig of water to extravagant dinners cooked with friends over multiple stoves in the backcountry.  These meals are the best, as we share secret delicacies from our unpacked bags– chocolates, cheeses, cinnamon and cilantro….Everything I know about cooking and digestion and nutrition, I learned on the road.  More on the Dovetail Learn page…

Pants rolled, sunglasses on, sitting upright, looking around.  Carradice Lowsaddle Longflap, Jandd Frame Pac, and Brooks Millbrook Holdall.  I know about the fenderline, and I’m not too worried.

From his first tourer, a mid-nineties steel Rockhopper with Ritchey dropouts, to the latest ultralight sleep systems, Cass Gilbert has some experiences to share. While he traces dotted lines in the American southwest this winter with 29 inch wheels and lightweight Porcelain Rocket framebags, we caught a few moments to ask him about touring with a trailer over on the Dovetail page.

Perhaps the most useful aspect of a trailer is in its ability to easily transform any bicycle into a touring machine. If a day off on a bike trip includes chasing singletrack and local club rides, [a] trailer can be a good way to keep it simple, especially when racks are complicated as on a full-suspension mountain bike or a lightweight road bike. More at the Dovetail Learn Page…

One of our first casual rides of the year, in which we leave without a destination and find our way home at our leisure, because it’s not that cold out any more.  On the heels of a snowfall record is a sunny 50F degree day.  Dry pavement abounds, bordered by snowbanks and dotted with isolated puddles reflecting evening light.  We’re back to riding normal tires again; Lael’s got 26 x 2.0 Schwalbe Big Apples and I’m on a worn out Schwalbe Marathon and and old Continental Top Touring tire.  Tires, like sleeping bags are highly personal and infinitely fascinating to me.  I’ve used many sleeping bags and many more tires.  It’s nice to wear normal shoes again, and to ride on dry pavement without the chatter of studs.  As the snow melts, dirt and gravel are left as ashes in it’s place.  Sidewalks and shoulders are uninspiring moist dirt paths for now. 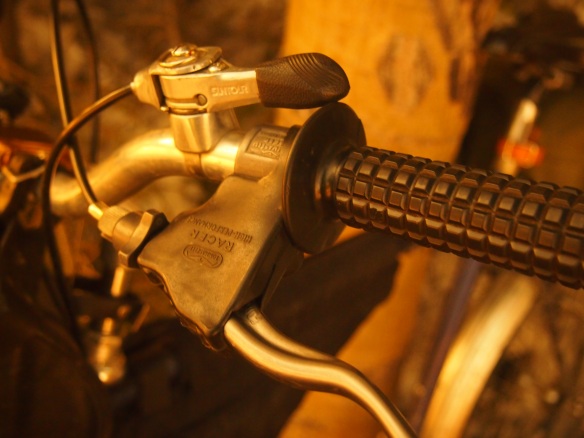 We use this ride as a planning session for the near future and and are satisfied that making plans while riding bikes in the amber light of the falling sun is appropriate inspiration for we have in store. 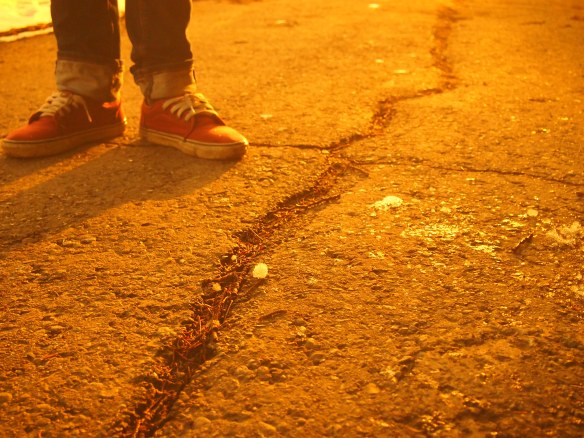 133.6 inches of snow.  Like winning the world series or a hopeful presidential election, the people of Anchorage rally around the accomplishment of “getting the record”.  Of course, we had nothing to do with it except shoveling it and looking at it and perhaps, complaining about it.  With about three inches of snow yesterday, we have superseded the longstanding record of 132.6 inches from the winter of 1954-55.