Nearly every day, Lael laces up her running shoes.  “Not every day”, she says, as an under-exaggerating technicality.  Yes, she packs an extra pair of shoes into her tidy bikepacking kit.  For part of the summer, she also had two pairs of sunglasses, one pair specifically for descending in low light, purchased for a few Euro in a French bike shop.  Two books are also common amongst her load.  In Switzerland, she bought a gold plated corkscrew for less than 1€.  This summer, she has enjoyed running new roads and trails.  Most often, she chooses to scout the trail ahead, returning with detailed reports like, “it’s real nice”,  or, “there might be some pushing”.

She has been a runner much longer than she has been riding bikes.  While cycling presents frequent thrills, running is consistent pleasure.  A week ago, she decided it was time to run another marathon.  It has been almost ten years since her last, when she finished third in the Anchorage Mayor’s Midnight Sun Marathon, run on the summer solstice.  She finished in just over 3:18.  Between now and then, she has run a 45km trail race in NM, a 12K road run, a half marathon a couple of 5k fun runs, and 40 miles of the Copper Canyon Ultramarathon.  The last one is a long story– in short, we just happened to ride into Urique, Mexico the day before the race.  She just happened to show up at the starting line, with the encouragement of a couple Missoulans.  And it just so happened, that she couldn’t walk very well for the next week.  She’ll tell you, “I had to pee in a push-up position.”  It was a tough run, that strengthened her interest in distance running.

Most of the year, she runs on her own, without a watch, without a plan, and without any nutrition or hydration.  She’ll be gone for an hour or two, and always returns smiling.  That’s the important thing.  She always comes back smiling.

So, when Northern Arizona falls under a layer of snow,

…we point our tires south, off the Mogollon Rim.  Below 5,000ft we lose the snow, and eventually, the pines.  With our sights on the Tucson Marathon in less than a week, we forgo the AZT for some more rapid transit.

Some road riding, and a couple hitches put us a lot closer to Tucson, within a few days of the run. 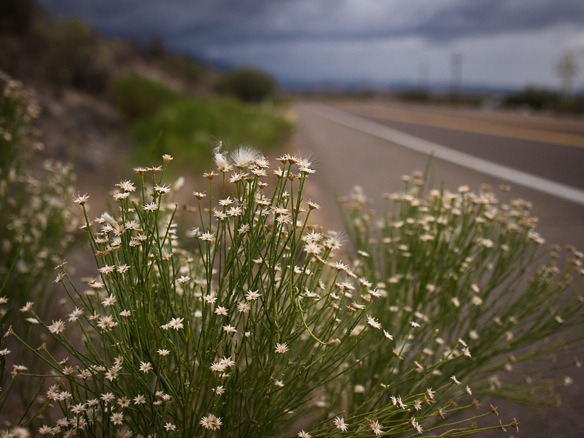 All the while, passing through heartachingly beautiful country, traversed by the AZT.  This will serve as fuel to come back as soon as possible to ride more in Arizona.  Maybe we will have a few days after the marathon to catch some sun and trails, before flying to Alaska for the winter.  We’ll be fatbike shopping next week. 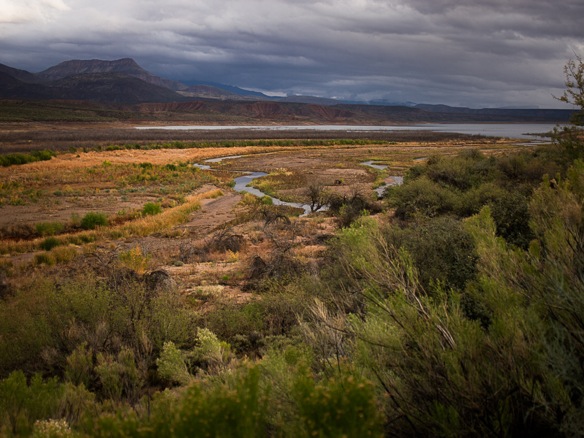 Even road touring in Arizona is incredible.  The state is not full of tumbleweed and cactus, exclusively.  Mountains, and a diverse visual range, cover the state. 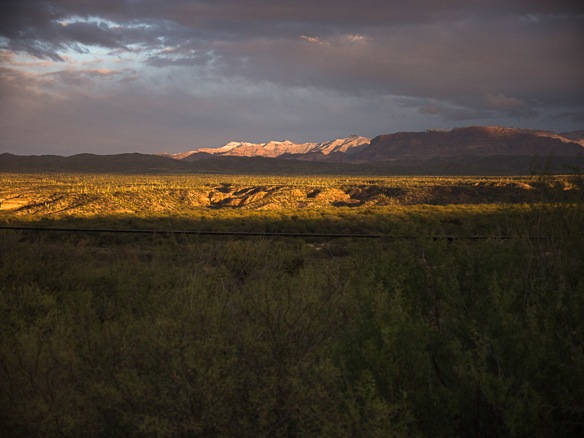 As do mining towns, with dwindling populations and hesitant economies.  These kind of towns harbor relics of old America, including dusty old groceries, old politics, and old people.  Local grocery stores barely survive, we have found, as the Circle K convenience store grows ever-present across the rural Arizona landscape.  It is really incredible.  In a larger city, we have even seen two stores across the street from one another.

Eating well while riding the white line isn’t always easy.  We’re missing the fresh foods that were readily available in Europe, especially in the Ukrainian bazaar.  But, we’re doing our best. 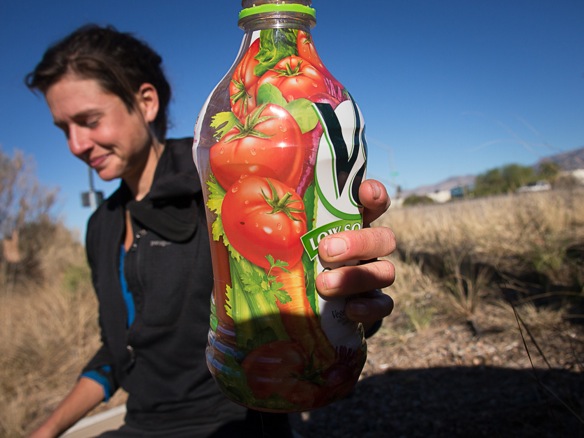 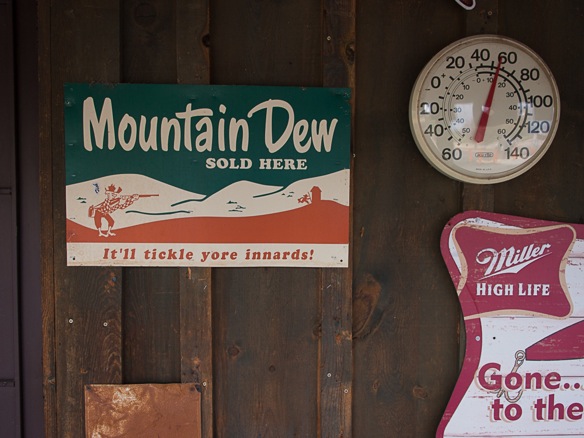 Arriving in the fresh stucco outskirts of Tucson, we meet a town with two sides.  A gauntlet of suburbia gives us time to scout a new pair of running shorts for the marathon.  In and out of Sports Authority in under 15 minutes, for under $15, is a good deal. 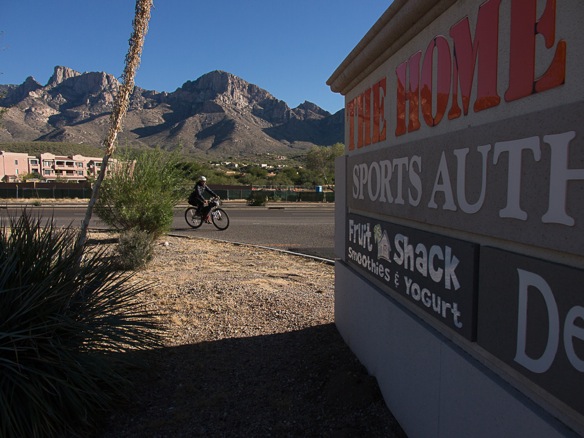 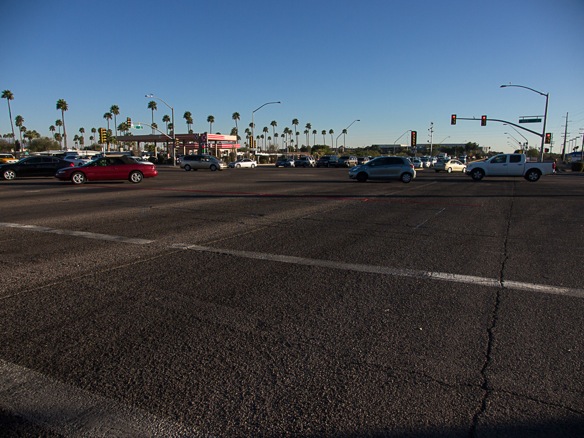 Old Tucson remind us of Albuquerque, and the colorful automobile era in the west.

In Tucson, we connect with Scott and Eszter.  Each of them are giants in the bikepacking world, but together, they are Goliath.  Eszter might be the fastest woman on the planet, on a bike, in events measuring 24 hours or more.  Scott has been in and out of ultra-racing for a decade, whose non-racing credentials including Topofusion, a powerful mapping tool (assuming you are running Windows); Trackleaders.com, a Spot tracking service which tracked the Baja 1000 and every major endurance bike race in the country this year; and Bikpeacking.net, an essential resource for adventurous off-pavement riders.  He’s put the Arizona Trail on the map for mountain bikers, and is continually involved with trail building, route design and mapping.  His promotion of the trail is most compelling to me, in the form of consistently sunny rides, dotted with towering saguaros, on southern stretches of trail near his seasonal home in Tucson.  If you like saguaros and singletrack, stay tuned to The Diary of Scott Morris.

On the occasion of Global Fatbike Day, we dust off some fatties, source a few missing parts, and shoot off for a quick ride.  Eszter is embarrassed that her Fatback hasn’t been ridden in a while.  Last time she rode it, she crushed the Iditarod Trail Invitational to McGrath.  The bike needed some time to rest.  Some spare trail mix is hiding in her pogies, from Alaska.  A neoprene face mask has sunken to the bottom of her framebag.

Filling in the blanks, I imagine the internal monologue: “Why can’t I just ride the Spearfish?”

And, “What the hell is Global Fatbike Day?”

Oh, it is real, Scott and I assure her.  Facebook says it is. 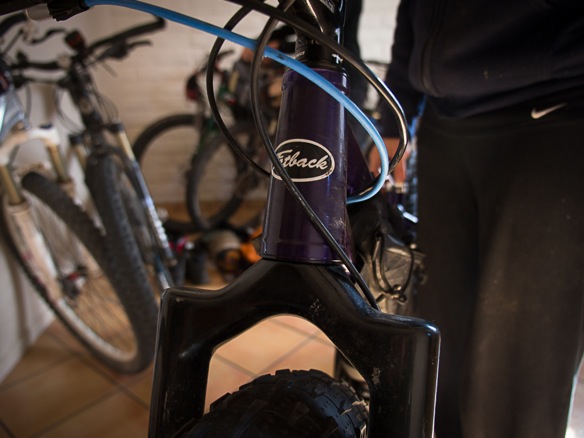 Wrenching on bikes– upside down in the driveway, of course– and riding, are a big part of the day.  While none of us are running playing cards in our spokes, life with Scott and Eszter has the simplicity of summer vacation.  Actually, Lael has a half-dozen Spokey-Dokes in her wheels.  We’re all doing things right, I think.  Except that we might spend next winter in Tucson. 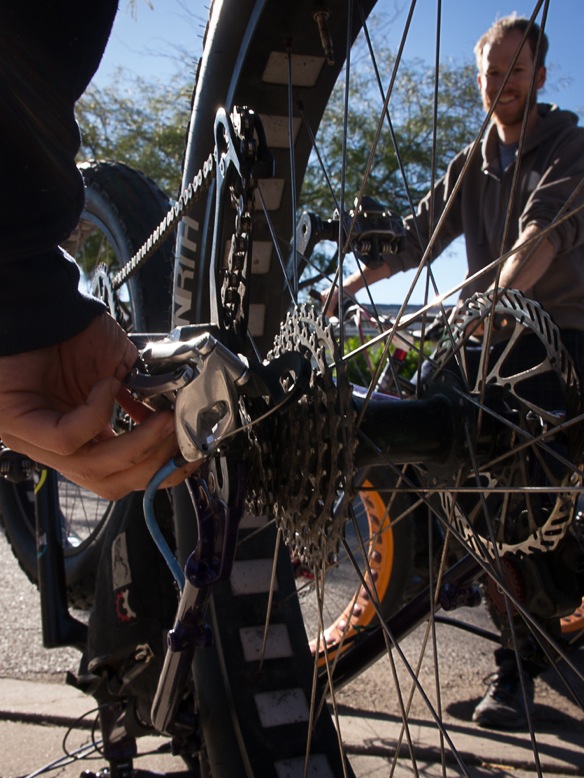 Scott’s Surly Moonlander, which also spent some time along the Iditarod Trail last winter, is ready to roll just a bit sooner.  Both are skeptical of riding their snow bikes on Tucson’s rocky trails.  I try to hide the fact that I used to be a fatbike evangelist.  Scott finds the right tire pressures.  A bike is a bike, and is still a ton of fun.

Tucson has been Scott’s playground for over a decade, when he first moved here for grad school (and sunshine and mountain biking, arguably more important).  This rocky climb is the current testing ground for new bikes and riders.  Lael tries on Scott’s Lenz Mammoth shred-sled, a finely-tuned long-travel 29er.  The penalty for coming up short is harsh. 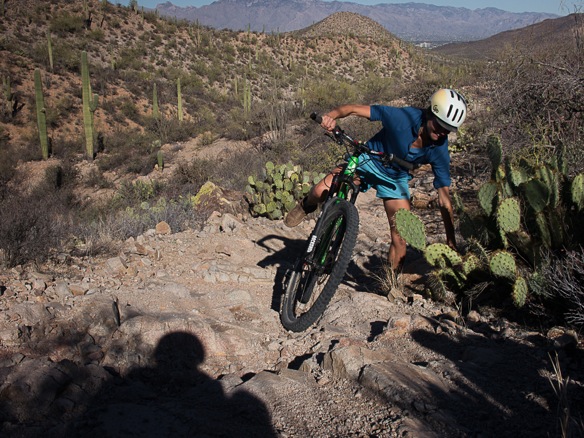 Lael passes on the challenge, to save her legs for the marathon the next morning.  We rode a couple hundred miles to get to Tucson this week.  The ride up to the start of the race is another 12 miles away, and we need to be there by 5AM.  She tries not to have too much fun before the race.

Back home to begin our crosstown trek to the marathon. 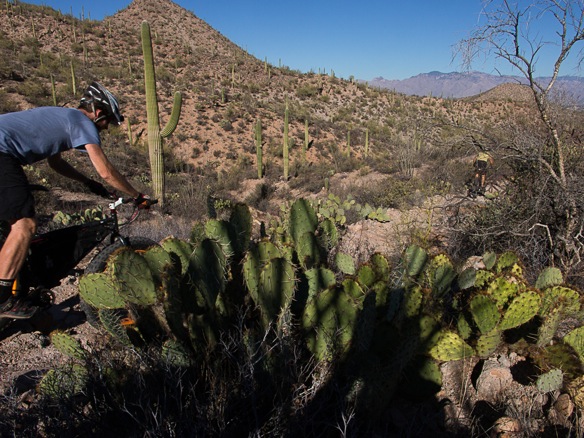 Even a technical bike-handling wizard like Scott occasionally puts a foot down.

As we’re all riding unfamiliar bikes, our brief jaunt reminds us of the simple joy of riding.  Whatever 2014 may bring, we’ll all be riding, for sure.  Lael and I might jump into a few local fatbike races, while it is possible that Scott and Eszter might go touring.  Forward is always the right direction. 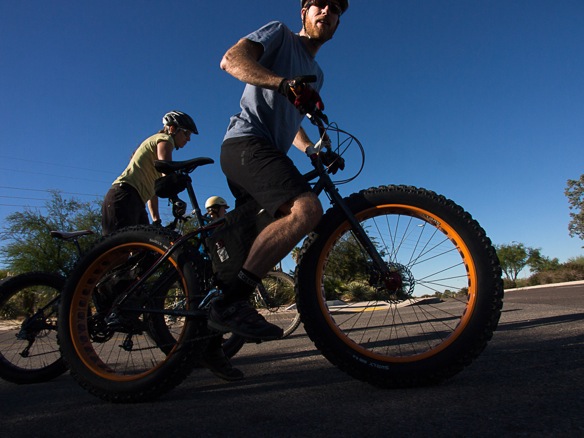 Packed and ready to roll, we shoot back towards suburbia to register for the race at the Hilton.

Lael signs in, and we stuff our pockets with as many energy bars and gel packets as we can bother to discuss with the Clif rep .  “Tell me about the carbohydrate profile of the Chocolate flavor, again.”

“Does this one have caffeine?”

Looking for a place to camp in suburbia requires a keen eye. 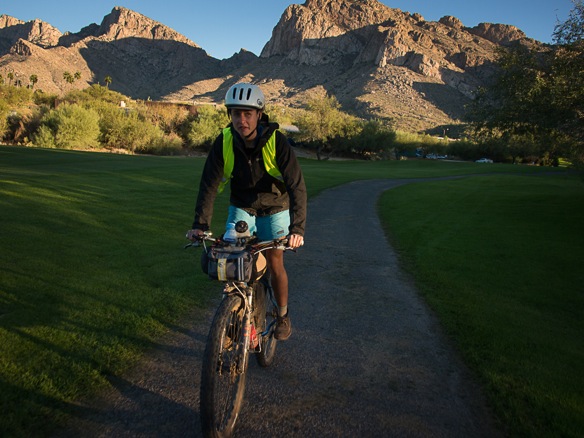 A quick stop at the grocery store, than roll across the street onto a small patch of unimproved desert in the ‘burbs.  It is less than 50 yards from the road, but with stunning views of the mountains, we’ll take it for the night. 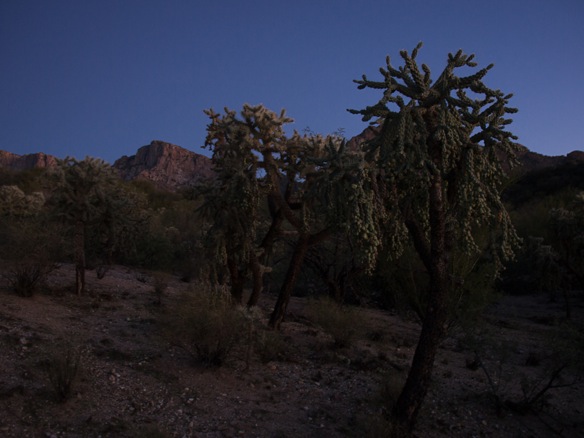 To rise at 3:55AM.  Ride a mile to the school buses which transport riders to the actual race start, another 25 miles out of town, another 2000ft in elevation.  The race starts at 7AM, 8 minutes before sunrise, in freezing temperatures under cloudy skies.  Hey Tucson, where did you go? 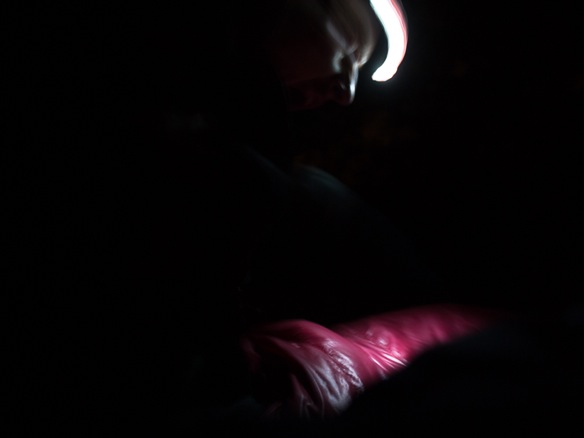 I begin my ride out of town, to intersect runners along the course.

Near mile 13, I spot bright green shorts and a big smile– Lael!  She claims the only genuine smile amongst a sea of runners.  It makes her easy to spot in a crown.

Scott mentioned that last year, after a long mountain bike ride, they scored a bunch of unopened race food along the course.  Additionally, I scan the roadside for warm layers in my size. 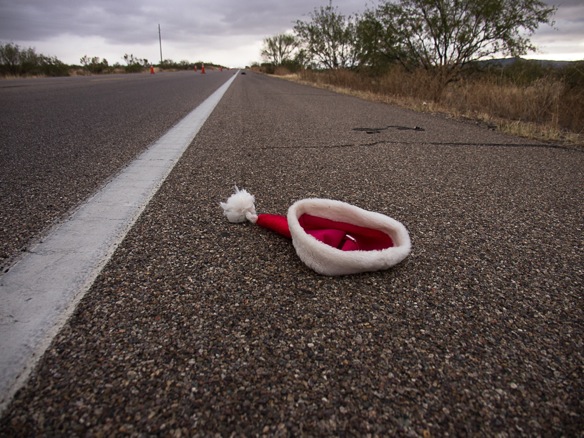 The course is a boring 26 mile paved run, losing nearly 2000ft.  It sounds easy, but most runner’s muscles aren’t accustomed to such a long descent.  Lael is amongst them, and is better prepared for climbing. 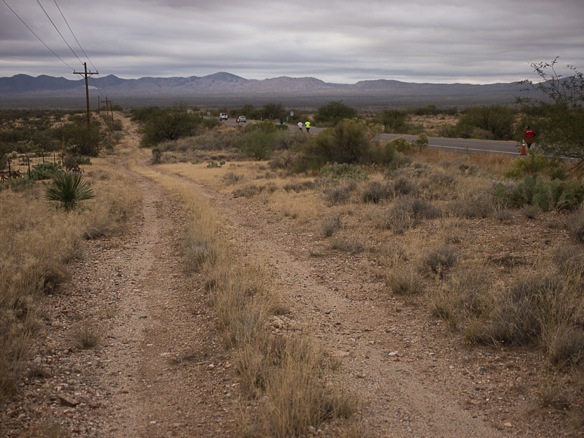 But a summer of riding and running prevail.  She keeps her pace and flies across the finish line in 3:14.27, several minutes faster than her previous marathon.  She is the 4th female finisher, and qualifies for the Boston Marathon with 20 minutes to spare. 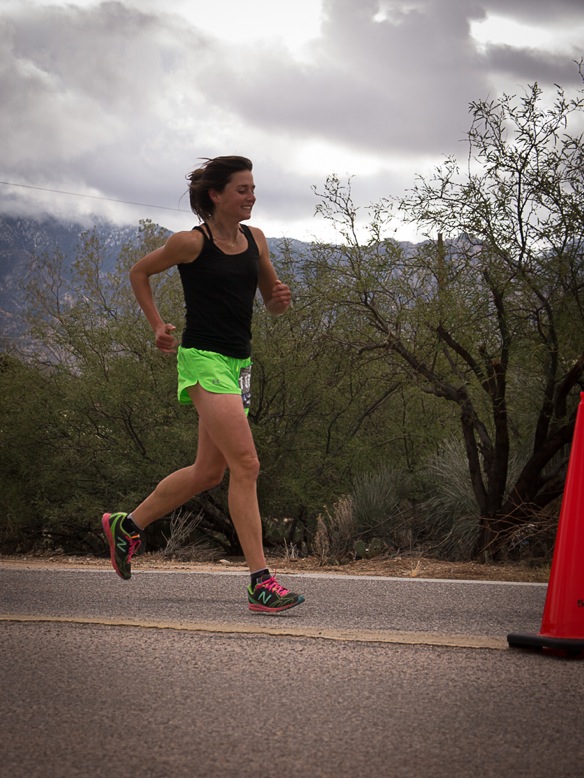 After the race, we are back on the bikes within the hour.  We slowly ride into town to rest and recover for the night.

I guarantee that Lael was the only runner that arrived at the race by bike.  After the marathon, we watch a parking lot full of cars slowly empty.  Runners hobble to their vehicles, turn the key, and drive away.  For Lael, activity has no boundaries in her life.  She is always moving.  Getting Lael to ride in a car is like trying to wrestle a puppy into the back seat of a sedan.

By morning, we’re riding out of town again, to eek out a few miles on the AZT before connecting with Phoenix, and our flight to Alaska.  If we’re lucky, we’ll find a few days of Sonoran sun and singletrack, now just a few weeks before Christmas.  We’ve been pretending that it is summer for a long time.  As snow falls above Tucson, it might be time to recharge the clock and start again up north. 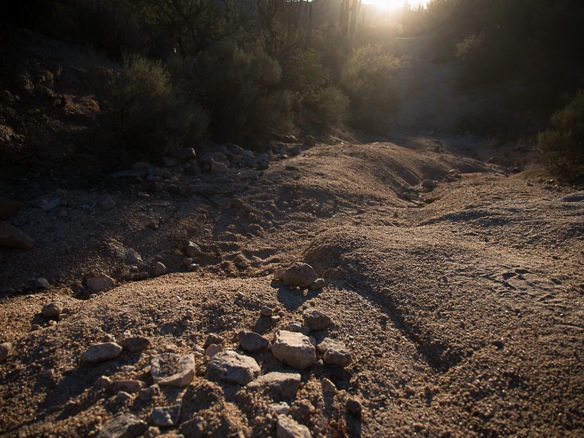 12 thoughts on “Tucson and The Marathon (and fatbikes)”